- EUR/USD forms a bearish pattern and sells off

- Important week ahead for Eurozone

The Euro-to-Dollar exchange rate opens the new week 1.1019 after falling 1.30% the week before. Studies of the charts show the pair selling-off after forming a bearish double-top reversal pattern, and more downside is quite possible, especially in the short-term.

The 4 hour chart - used to determine the short-term outlook, which includes the coming week or next 5 days - shows the formation of an ‘M’ shaped bearish double-top reversal pattern at the highs. 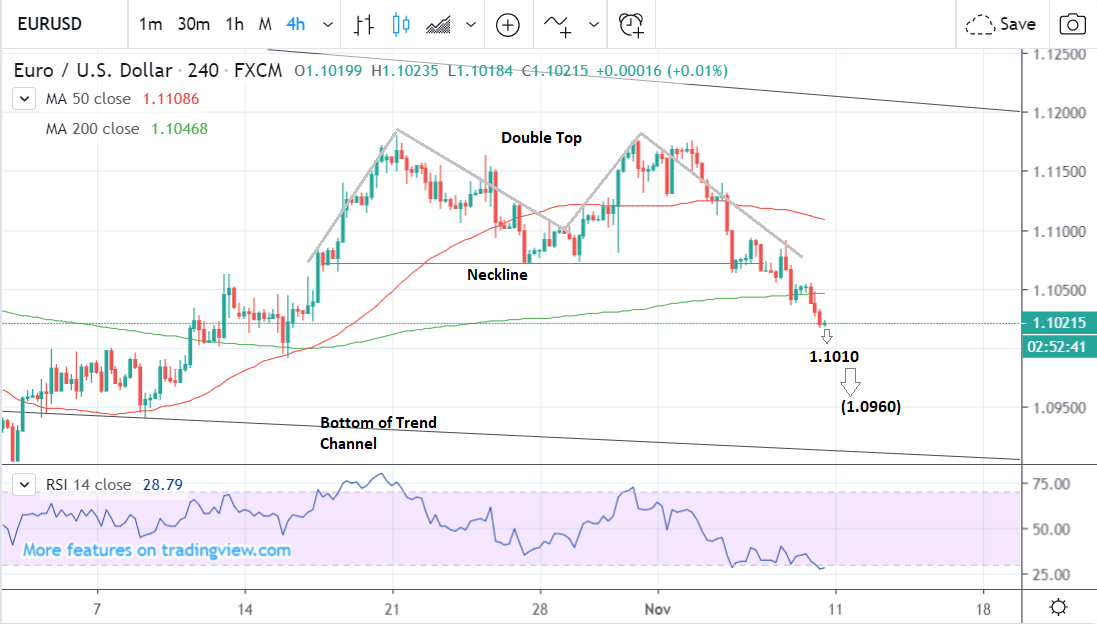 This pattern indicates further downside on the horizon subject to a break below the ‘neckline’ at its base, which has already actually happened.

It is now expected to continue lower to the next, more conservative target at 1.1010, and then probably the eventual target for the pattern at 1.0960.

There is a possibility it may only reach as far as the first 1.1010 target and then stall or bounce.

This is especially true given that the RSI momentum indicator in the lower pane of the chart has entered the oversold region below 30.

This suggests a rising risk of a rebound in the exchange rate, however, it is not certain and the pair may eventually still fall down to the 1.0960 target after a brief pull-back. However, there is no way of knowing for sure whether it will or not at this stage.

The daily chart shows how the exchange rate is currently attempting to pierce below the 50-day moving average (MA) at 1.1039.

The 50-day MA is likely to provide strong support counteracting the bearish impetus to continue selling-off and there is a risk the down move may stall or even completely reverse.

There is also a risk the pair could simply continue selling-off down to the 1.0960 target and then base at that level.

Beyond that, it is difficult to ascertain where the exchange rate will go given how volatile it has been of late.

The weekly chart shows the bigger picture of how the pair is declining in a falling channel. 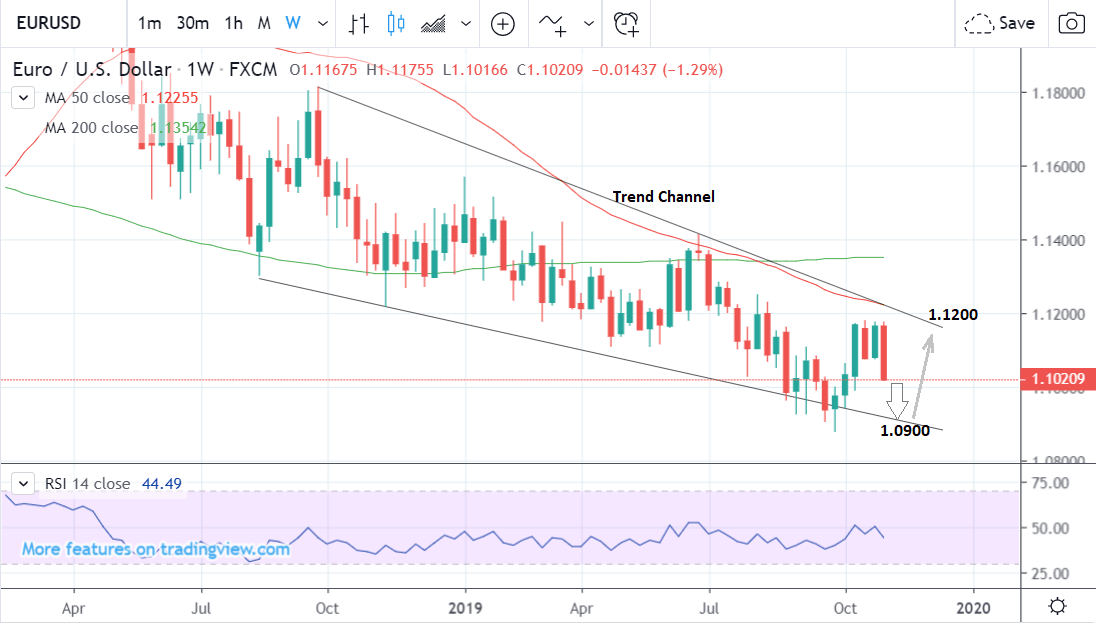 The pair has unfolded a sequence of peaks and troughs lower and there is a good chance it could simply continue falling to the base of the channel at 1.0900, and then perhaps recover back up to the channel highs at 1.1200.

"In the euro area we have an important week ahead of us," says Mihr, citing Spanish election results, President Trump's decision on EU tariffs and Eurozone industrial production numbers.

Spain on Sunday voted in its fourth election in four years as Prime Minister Sanchez failed to strike a deal with far left Podemos after the latest elections in April.

"Sanchez now hopes to gather enough support to govern, but recent polls show falling support for PSOE and again no party or block is likely to get an absolute majority in the highly fragmented parliament," says Mihr. "For markets, a left-wing government supported by nationalist parties would be slightly market unfriendly in the near term, whereas a PSOE minority government with right wing abstention should be market friendly in the near term due to the possibility of market-oriented reforms."

Tuesday sees the release of German ZEW Current Conditions data for November released, as well as the Economic sentiment reading.

The German economy is struggling, and markets will be eyeing these forward-looking indicators for signs of whether Europe's targets economy is about to turn a corner.

Wednesday will likely see U.S. President Trump announce whether or not he will impose additional tariffs on cars imported from the EU.

"Additional tariffs would be the last nail in the coffin for the already weak euro area manufacturing (and car) sector, just as signs of a stabilisation are becoming more abundant. However, it will also be a hard hit to US consumers, which President Trump will be keen to avoid going into the 2020 Presidential elections," says Mihr.

A decision to slap tariffs on the EU would prove to be a negative surprise as the market consensus does appear to suggest Trump won't move forward with punitive tariffs.

Indeed, Commerce Secretary Wilbur Ross recently said tariffs could be off the table for now after ‘good conversations’ with car manufacturers about potential production relocations. Nevertheless, investors should keep a very close eye on the announcement.

Wednesday September industrial production figures for the Eurozone are released at 10:00 GMT. Market consensus is looking for a reading of -0.3% month-on-month to be released for September.

"The question is whether the stabilisation in the latest manufacturing PMIs shows up in the production figures. We expect the figures to confirm that the manufacturing sector has stayed in recession in Q3," says Mihr.

Looking for the Dollar's Dominance to Extend

The Dollar has been in recovery mode in November, with the Dollar index - a measure of broad-based Dollar strength - rising from 97.10 on November 01 to 98.02 at the time of writing.

It appears that some of the Dollar's strenght stems from the Federal Reserve's message to markets  on October 31 that ithey are unlikely to cut interest rates again at their December meeting.

The view that the economy does not need further support from the Fed will be reinforced by this week's data, should it come out on the strong side.

"In the US, CPI core for October is due out Wednesday. The last couple of months, CPI core has surprised on the upside, but we do not expect this to be the beginning of a new trend given the low inflation expectations," says Mihr.

The Core CPI inflation figure is forecast to read at 0.2% month-on-month when released at 13:30 GMT on Wednesday. A beat would likely be supportive of the USD, a miss would likely undermine the currency.

On Friday, retail sales for October are due for release.

"The past couple of months, retail sales have come in weaker, reflecting lower but still decent consumption growth. In light of the weakness in the manufacturing sector, we will keep an eye on whether private consumption growth can keep up the pace. While a negative surprise is long overdue given the volatility of the time series, fundamentals still look strong," says Mihr.

Markets are looking for a reading of 0.2% month-on-month for October when released at 13:30 GMT.

Keep an eye on a number of speeches from Federal Reserve board members.

"The Fed speeches after the October cut suggest most FOMC members, even the doves, think the current stance of monetary policy is appropriate and that data need to deteriorate further before it will cut again. We expect the FOMC members to send the same signal next week, in particular when Powell speaks before the US Congress on Wednesday," says Mihr.

Should the message be consistent with the view that no immediate interest rate cuts are required, we would expect the Dollar's recent trend of appreciation to extend.