- After being lifted by signs of recovery and U.S.-China progress.

- EU has downgraded its growth, inflation and EUR forecasts.

- Paltry 2021 inflation forecast suggests ECB might be in trouble.

- But signs of recovery are building, Westpac tips EUR as a buy.

The Euro saw a soft start to the final session of the week Friday after being undermined in the previous session by new European Commission forecasts suggesting there might be trouble ahead for the European Central Bank (ECB), which is risking earlier optimism over the growth outlook and trade war.

EU Commission forecasters say Europe has entered a "protracted period" of slow growth and low inflation, which it attributes in large part to unresolved uncertainties around the U.S.-China trade war and Brexit, although it also cited structural changes in the manufacturing industry. And in a world where currency markets are taking their cues from differences in economic growth rates, for the time being at least, that was never going to be good news for the Euro.

GDP growth in Germany is now likely to be just 0.4% for 2019 and only 1% in 2020 as well as 2021, the commission said Thursday, quashing the earlier optimism about the prospect of an improvement in the economic outlook. The forecasts are downgrades and suggest that Europe's economic engine might not get its mo-jo back for a while yet, even if trade balance data somewhat lifted the gloomy mood around the German economy Friday.

"A technical recession is not yet a done deal. In fact, today’s trade data suggest that there has been hardly any negative drag from net trade on 3Q GDP," says Carsten Brzeski, chief economist at ING Germany, on Friday.

Meanwhile, the Eurozone is expected to grow just 1.1% in 2019, beneath even the paltry 1.4% forecast for the Brexiting UK, and even worse still for the market is the projection growth will have rebounded to only 1.2% by the end of 2021. And the inflation forecasts were no better, which could be problematic for an ECB that's fired what many say is its last monetary policy bullet in order to get price pressures back the "close to, but below 2%" target.

"The key to the EUR picture is and has always been the fiscal policy outlook; even the reduction in sovereign risk and greater "risk sharing" for progress on banking union are partly dependent on the fiscal approach, at least in our view. We expect the 1.1000/1.1200 range in EURUSD to hold for now," says Stephen Gallo, European head of FX strategy at BMO Capital Markets. 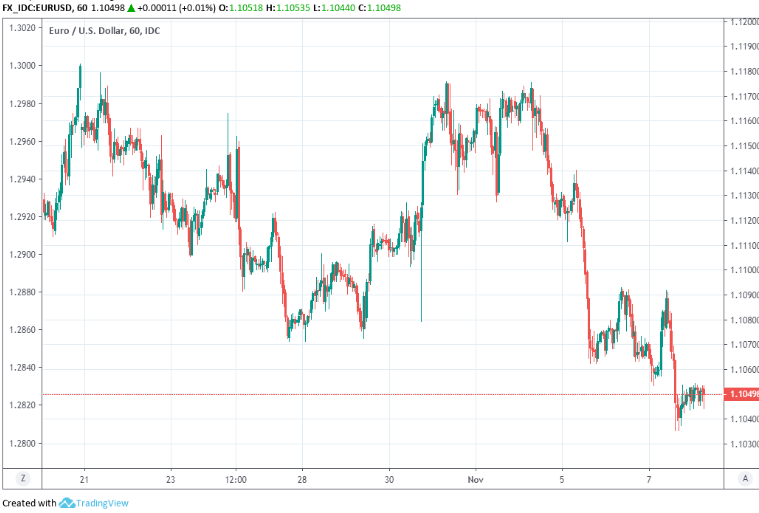 "The European Commission's growth forecasts make for grim reading. The comment that the European economy has entered a protracted period of subdued growth and low inflation is particularly stark," says Darren Smith, a derivatives salesperson at UBS. "The 2021 forecast will be particularly worrying to those already concerned at the de-anchoring of inflation expectations."

Downgrades have come despite the interest rate cut and new quantitative easing program that was unveiled by the ECB between publication of the Spring and Thursday's forecasts, which are particularly troubling for the market because there's now little more the ECB can do to get the economy growing at a speed that's sufficient enough to deliver the inflation target. The ECB has effectively resorted to imploring governments, many of which are straitjacketed by the bloc's fiscal rules, to spend more in order to help it out.

Thursday's figures have asked awkward questions of a market that was again revelling in hope that a 'phase one deal' might be reached between the U.S. and China, as well as tentative signs that an economic turnaround might be lurking in the long grass of next year. However, and as much as they aren't good news for the Euro, they are no more than forecasts that were made at a time when there's a lot on the table that's still to play for as far as the outlook goes.

"The euro has enjoyed a sharp tick higher on the back of comments by China’s Ministry of Commerce this morning indicating that the US and China had agreed to remove tariffs in phases in a sign that progress is being made towards an interim trade deal being signed this year," says Fritz Louw, an analyst at MUFG, in a morning note to clients. "With a lot of good news priced now, a move toward removal of previous tariffs is probably required to maintain risk appetite." 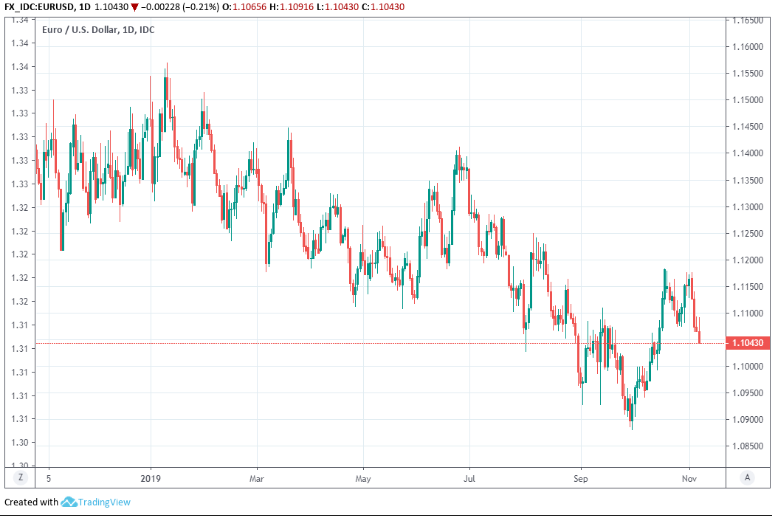 "Downside for the euro could be limited from here," Louw adds. "The euro is nearing levels on the RSI where it would be poised for a recovery. And with the yield on 10-year German bonds climbing nearly 40bps since early September, the yield environment has also become more positive for the euro. Our yield differential model shows there is still some upside potential for the euro on this, with scope to reach the 1.1200 level against the dollar."

China's Commerce Ministry said Thursday a deal could be reached, even if it does take longer than previously planned, and that more of the existing punitive levies on imports from either side will soon be lifted. This is more balm for sentiments toward the global economy and helped lift the Euro into the Thursday session but the single currency was egged on in its earlier gains by German industrial production figures for September.

The industrial numbers were dire when released in the morning hours but did reveal a turn higher in the shortest-term growth rates, which economists say could portend a recovery further down the line. They come hard on the heels of factory orders data released on Wednesday, which new orders rising by 1.3% in September when markets were looking for only a 0.1% increase.

"The persistent industrial drag has likely pushed GDP growth into negative territory again in Q3 19, however, we expect the industrial sector to start recovering gradually from these levels," says Iaroslav Shelepko at Barclays. 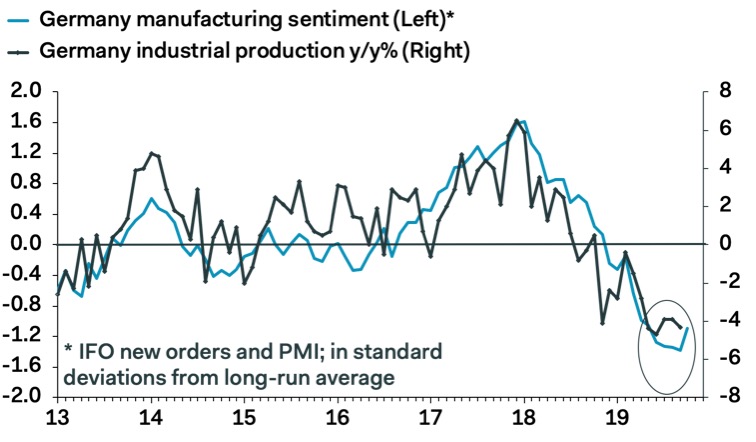 "The chart shows that the headline surveys point to an unchanged trend in production growth at the start of Q4, at around -4.0% year-over-year, but the IFO new orders index jumped in October and the shorter frequency growth rates in new orders, three-to-six months, are turning up, pointing to a bit better data," says Claus Vistesen, chief Eurozone economist at Pantheon Macroeconomics.

September's orders data prompted speculation about a possible recovery in the German economy, whose factory sector has fallen over in the last year and is widely thought to have dragged the country into a technical recession in the third quarter. The final word will not be said on that question until next Thursday.

Germany's economic boat is a large part of the overall Eurozone flotilla and has an impact on the buoyancy of many others in the bloc so it can be an effective bellwether of the broader Eurozone. Strategists in the London office of Westpac say this kind of data is part of why they're recommending that clients of the bank buy the Euro-to-Dollar rate and target a move up to 1.1280, from 1.1080.

"We're looking for EUR to outperform. EU data surprises have shifted to beating persistent weakness whilst the global risk backdrop has lifted and there are nascent signs of a pick-up in Germany's key capital export orders. The improving backdrop for US-China trade negotiations and a greater sense of political risk into the US elections may reduce USD performance," says Westpac's Tim Riddell.