- EUR/USD rising back up within falling channel

- Risk of breakout from channel leading to more upside

- Euro to be moved by opinion polls and BOE meeting

The Euro-to-Dollar exchange rate is trading at around 1.1165 at the start of the new week after rising 0.77% in the week before. Studies of the charts show the pair probably resuming its short-term uptrend after a brief pull-back.

The 4 hour chart - used to determine the short-term outlook, which includes the coming week or next 5 days - shows the pair recovering and rising following a pull-back. 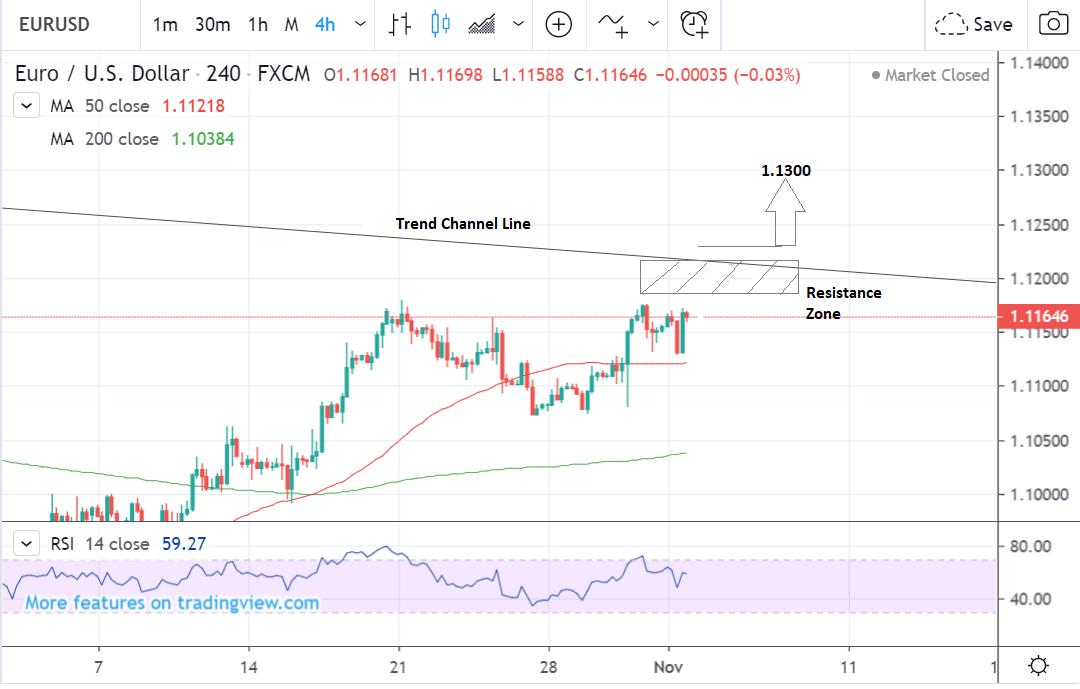 It has now almost reached the old 1.1179 highs and a resistance zone above, including the trend channel line.

This resistance zone, represented as a hatched area on the chart above, is likely to act as an obstacle limiting but not preventing further gains.

A break above 1.1225 would confirm a clear breakout higher and indicate a probable extension to a target at 1.1300.

The daily chart partly explains the location of the resistance zone, which is made up of a combination of the October 21 highs, the 200-day moving average (MA), and the trend channel line. 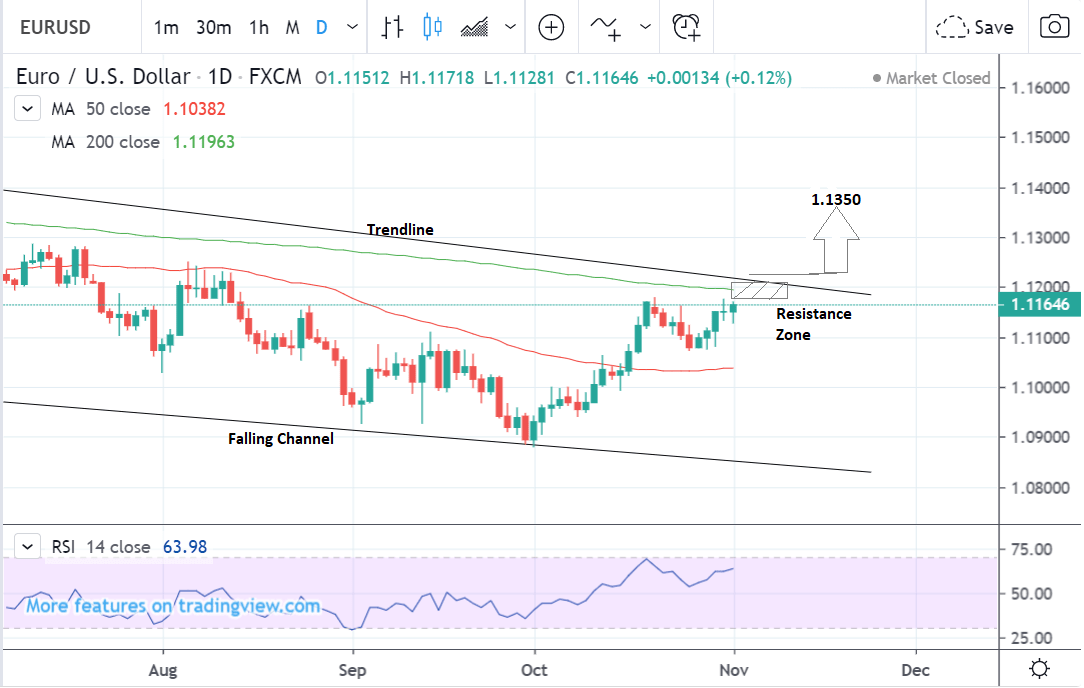 It is located above the current market level and is likely to act as a ceiling capping further gains in the exchange rate.

A clear break above, however, confirmed by a break above 1.1225 would give a green-light to continuation up to the next major target at 1.1350.

The weekly chart shows the bigger picture of the pair's steady decline within the confines of a falling channel. 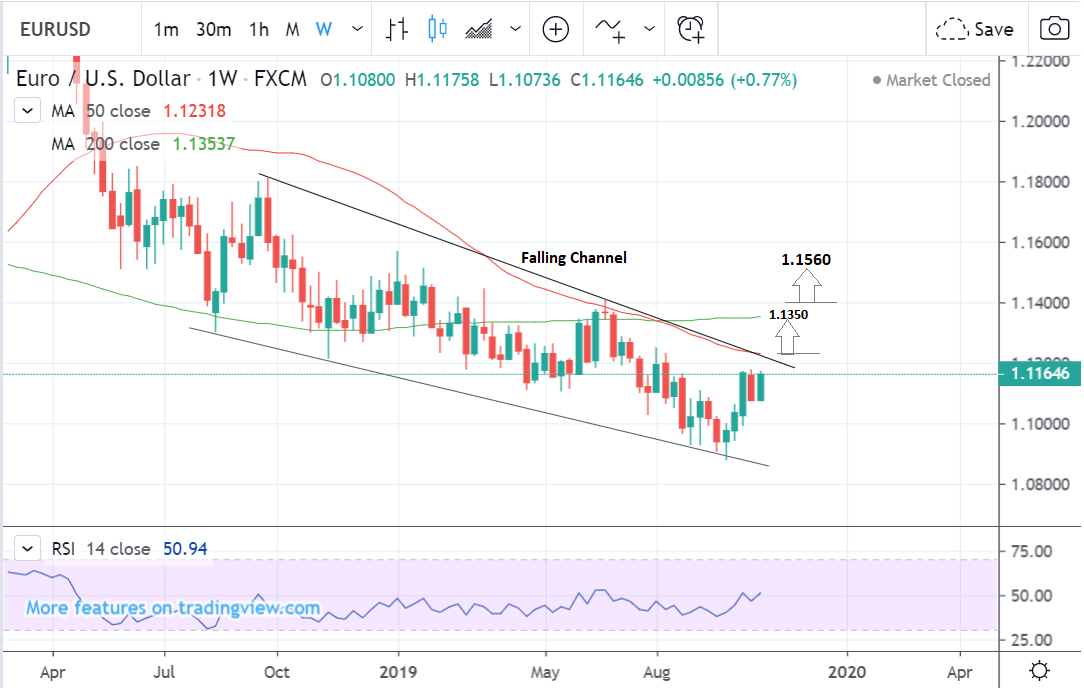 As has already been mentioned, a break higher would probably lead to a continuation up to a target at 1.1350 initially at which point the exchange rate will encounter resistance from the 200-week MA and the June highs.

Further bullishness and a break above the 1.1400 level would then probably confirm a continuation up to a target at around 1.1560, calculated by extrapolating the height of the channel higher from the break - the normal method for establishing targets after channel breakouts.

The main drivers of the Euro in the week ahead are the EU’s official winter economic forecasts on Thursday, ahead of the Eurogroup meeting of finance ministers, and retail sales data out on Wednesday.

The EU’s previous official forecast for euro area GDP growth, released in the summer, estimated growth of 1.2% in 2019 - unchanged from the previous estimate - a slightly lower 1.4% in 2020.

Substantial deviations in the winter release from these estimates are not expected but might result in fluctuations in the Euro.

A higher forecast would support the currency and vice versa for a lower forecast. The forecasts are released at 6.00 BST on Thursday.

Eurozone retail sales for September is expected to show a rise of 0.1% from the month before when released at 10.00 on Wednesday.

The main releases for the U.S. Dollar in the week ahead are the ISM non-manufacturing PMI survey out on Tuesday and Michigan sentiment out on Friday.

Both these metrics will provide more insight into the performance of the parts of the economy - services and the U.S. consumer - which have so far remained relatively insulated from the global slowdown in heavy industry.

The main concern is that contagion into these areas could spark a recession, so substantial weakness in the data is likely to impact negatively on the Dollar.

The ISM non-manufacturing PMI is out on Tuesday at 15.00 BST and is the more important of the two. Current market expectations are for a rise to 53.4 from 52.6. The employment sub-index is also likely to garner a lot of attention due to woeful underperformance in recent months.

It is a timely indicator of consumer sentiment and can highlight broader economic trends before their time.

It has held up quite robustly during the recent downturn suggesting continued optimism amongst consumers who are the bulwark of the U.S. economy.

The trend is expected to continue with little impact on the U.S. Dollar if it continues going up. The main risk to the Dollar is that Michigan sentiment suddenly falls sharply as this might be a recession indicator.