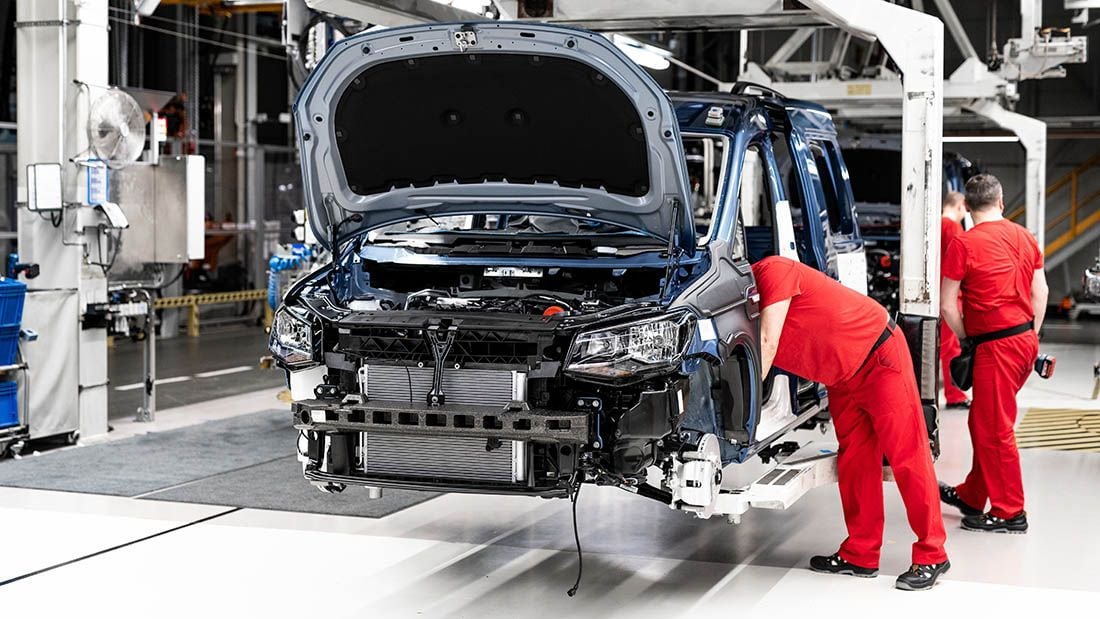 - But are a double edged sword for EUR as Trump mulls delay.

The Euro has ceded ground to most major rivals this week and risks continuing to underperform in the weeks ahead as the expiry of a temporary delay to new U.S. trade tariffs comes into view, although some say the looming White House decision is a double edged sword for the single currency.

Europe's single currency has weakened relative to six out of its nine major rivals this week, underperforming in what has been a broad riposte against the once mighty Dollar - which has itself declined in a similar manner.

October’s IHS Markit PMI surveys and the latest European Central Bank (ECB) monetary policy decision are both due for release Thursday, which might explain some of the Euro’s sluggishness this week but the decision by President Donald Trump on whether to impose tariffs on cars exported to the U.S. will become an additional dampener on the outlook in November. 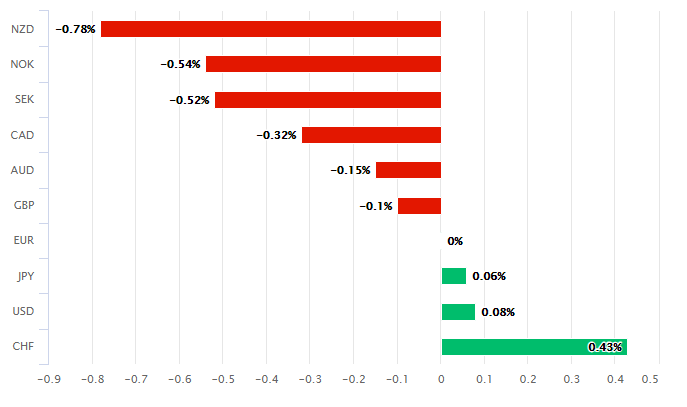 “Trade tensions between the U.S. and EU already increased in October," says Derek Halpenny, European head of global markets research at MUFG. "A blanket tariff on autos however would mark a dramatic escalation from the U.S. side and President Trump could face backlash within the US due to the likely economic impact. While we do not foresee such an escalation occurring already in November, it could become a focus for the euro going forward.“

U.S. Commerce Secretary Wilbur Ross revealed in an interview published Wednesday by the FT that the White House may further extend an existing delay to new tariffs on EU car exports when it expires in mid-November.

Ross said new talks, rather than a descent into a tariff fight, are possible but also acknowledged that tariffs could still be imposed.

Trump delayed on May 17 a decision on how to address what he says are unfair trading practices, although he’s since threatened tariffs of up to 25% if the EU doesn’t cut its own levies and provide U.S. farmers access to the EU agricultural market. He also wants commitments relating to taxation of digital companies. 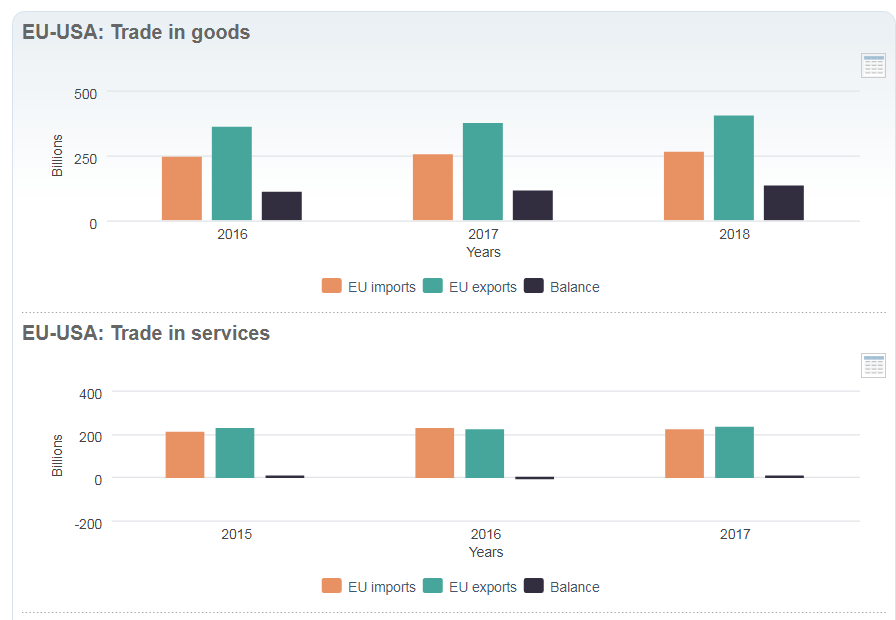 “The Euro has shared only a modest proportion of the gains that the Pound has made against the Dollar on recent Brexit optimism, as unresolved U.S.-China trade tension and a broader macroeconomic slowdown continue to weigh on the euro-zone outlook. With a potential mini-deal between the U.S. and China imminent, market focus could begin to shift to the trading relationship between the U.S. and the EU. Overall November is shaping up to be a crucial month for trade negotiations,” says Halpenny.

Halpenny says a tariff delay is something that could offer support to the Euro over the coming weeks, but he also underlines that there remains a risk of tariffs and that the U.S.-China trade negotiations are also an iceberg on the horizon. Trump said on October 11 he’s struck a “phase one” deal with China, which has already averted a tariff increase scheduled for the 15th, although the agreement has not yet been written up and markets have been primed to expect a formal pact before the Asia-Pacific Economic Cooperation summit in Chile on November 16. The delayed to EU tariffs will be expiring around the same time.

Europe’s fragile economy has been badly damaged by the U.S.-China trade war and is expected to slow sharply again this year as well as next, while Germany is already believed to be in recession so the Euro would be unlikely to take well any adverse outcome for either of November’s tariff decisions. Meanwhile, IHS Markit PMI surveys of the manufacturing and services sectors in October will provide the latest insights into the current state of the economy on Thursday, and so too will the ECB policy decision.

"Ahead of Mario Draghi’s last meeting as ECB President, we’ll get to see the October run of flash PMIs. Here the focus will be on whether: a) there have been any signs of recovery in the manufacturing PMIs; or b) whether the slowdown in the industrial sector is starting to spread to the services sector," says Chris Turner, head of FX strategy at ING. "Rising inventories and soft order books could limit any bounce in manufacturing optimism. Combined with a sense that the ECB is split on both current and future policy warns that investors aren’t ready to rotate into Europe as a growth play yet. EUR/USD could correct to 1.1065 and possibly 1.1000 if the PMIs disappoint." 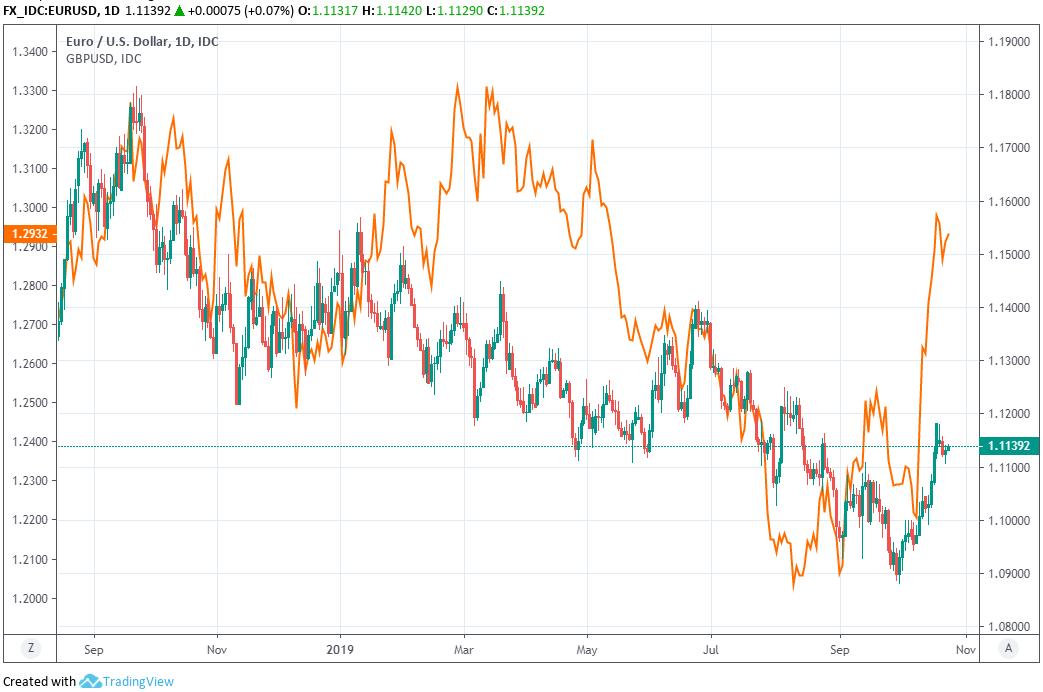 “We do not think the ECB decision will offer much other than a reminder why the common currency will continue to lack escape velocity and inferior to king USD. All this comes ahead of what will be a rather busy schedule next week that will have a US-centric theme including a Fed decision (that may reveal more patience than inclination to cut),... Put simply, EUR and GBP have had their day in the limelight, but now it's the USD's turn,”  says Mazen Issa, a strategist at TD Securities. “We think this could also help shape the tactical landscape for the DXY, particularly if the data does not pick-up relative to its peers.”

The Euro has lagged in a global riposte to the Dollar heading this week but it could be the case that the single currency spends the coming weeks in retreat from the Dollar regardless of the tariff outlook, according to TD Securities. Issa is looking for the Federal Reserve (Fed) to again signal reluctance to cut its interest rate much further than it already has done when the next decision is announced on October 30,

That could provide a boost to a safe-haven Dollar that’s been wounded by the October 11 U.S.-China pact and recent progress in the Brexit process, especially as markets are pricing-in a further two rate cuts for the year ahead, with the next seen landing before the end of January 2020. Federal Reserve Vice Chairman Richard Clarida did little to discourage the notion last Friday that the bank might be minded to indulge those wagers.

“The rationale here has been that the major instigators of USD weakness – EUR and GBP - look to have run their course – tactically, at least. The dominoes appear to be falling into place. After UK Parliament passed the first vote on Brexit legislation but voted down its timetable for implementation, GBP has lost some of its luster,” Issa says.