- Break above highs to confirm extension

- Euro to be moved by Brexit and industrial production

- U.S. Dollar to be moved by retail sales and trade deal

The Euro-to-Dollar exchange rate is trading at around 1.1035 at the start of the new week after rising 0.27% in the week before. Studies of the charts are showing the potential for more upside in the short-term dependent on a break to new highs.

The 4 hour chart - used to determine the short-term outlook, which includes the coming week or next 5 days - shows how the pair recently broke above the downsloping trendline and rose to new highs. 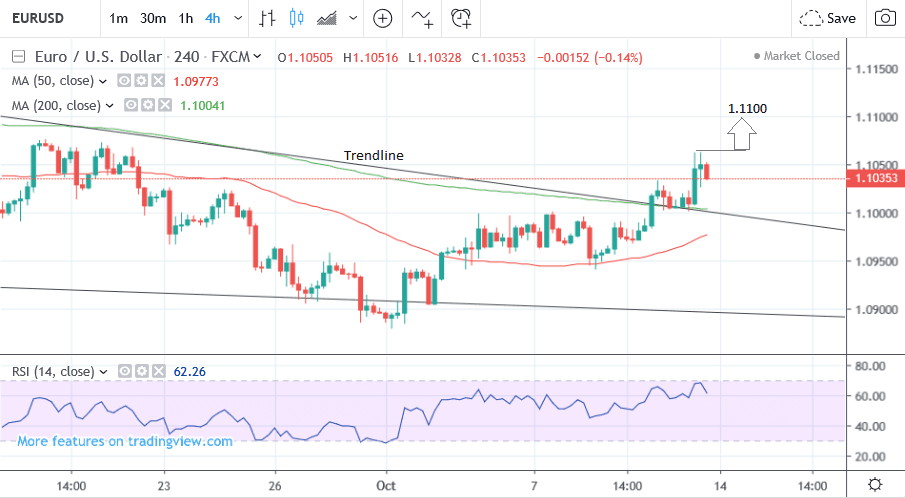 It has now established a short-term uptrend since the October 1 lows and given the old adage that ‘the trend is your friend’ this uptrend is forecast to continue.

For more bullish confirmation, however, we would ideally wish to see a clear break above the 1.1063 highs, with such a move leading to a continuation up to a target at 1.1100 - or possibly even higher - in the short-term.

The daily chart shows how the pair has broken out above its downsloping trendline, touched the 50-day moving average (MA), and then pulled-back marginally. 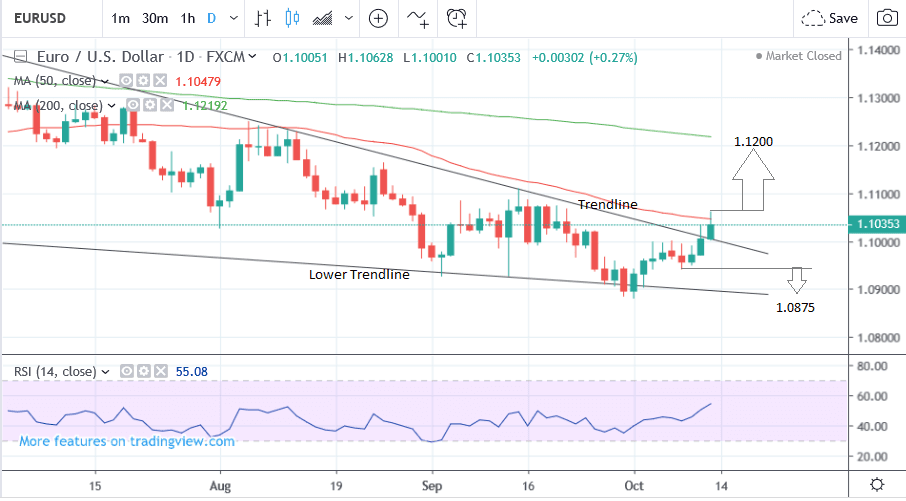 The 50-day MA is likely to present a tough obstacle to further upside and for confirmation we would ideally wish to see a clear break above the 1.1063 highs which could then lead to a continuation up to a target at 1.1200.

The weekly chart shows the bigger picture which remains inconclusive. 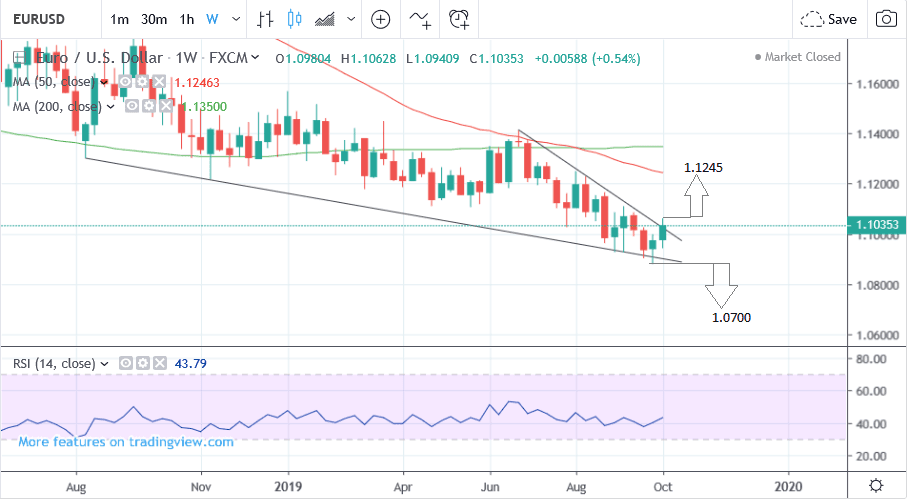 It shows how the pair is still in a downtrend which could very well continue to as low as at 1.0700 based on an extrapolation of the lower trendline providing a trajectory for the steady decline.

The lack of downside momentum, however, makes us cautious to take an outright bearish stance - there is an old Wall Street saying to never short a dull market - and we would only forecast lower prices conditional on a break below the 1.0879 October 1 lows.

Another way of looking at the chart is to see the pair declining in a wedge pattern, currently tapering to a point. This suggests a chance of a volatile breakout either higher or lower - although falling wedges often resolve higher.

A clear break above the 1.1063 highs would certainly help the longer-term bullish outlook, and a further break above 1.1100 would strongly suggest a continuation, potentially to a target at 1.1245 in the long-term.

The key event for the Euro will probably be the outcome of Brexit negotiations as they reach fruition at the EU summit on Thursday and Friday, since this is a ‘last chance saloon’ for the two sides to broker a deal.

It is in the Eurozone’s interests to broker a deal given the UK represents an important trading partner for the block, but they will be weighing the importance of maintaining good relations with their unruly neighbour with maintaining the integrity of the European Union. as a whole

If a deal is agreed, however, the Euro will rise, even if it is not as much as the Pound.

Likewise no-deal could fuel further uncertainty and weaken the single currency, although too many locking mechanisms now appear to be in place to prevent an actual ‘no-deal’ Brexit on October 31, so declines could be measured.

The other key release for the Euro is Eurozone industrial production which is forecast to show a 0.3% rise in August from a 0.4% fall in the previous month.

“The Eurozone’s (particularly Germany’s) relatively higher reliance on industry as a share of the economy has brought the region to the brink of recession,” says Wells Fargo in an economics briefing to clients.

“The key question, in our view, is whether the industrial slowdown spreads to other areas of the economy. There are initial signs this is happening, as the Eurozone services PMI fell sharply last month, while industrial orders for consumer goods have showed particular weakness recently. We are not yet ready to call time on the Eurozone economic expansion, but the divergence probably cannot last forever. Either the industrial sector needs to recover, or it will likely drag the rest of the economy down with it,” adds Wells Fargo.

The ZEW sentiment index which is compiled from a survey of 3000 financial professionals is also out next week, and could impact on the Euro.

The ZEW is viewed as a fairly reliable leading index for the economy so a deeper-than-expected decline would weigh on the Euro whilst a higher-than-expected result would support the currency.

The main release for the U.S. Dollar in the coming week is probably retail sales data out on Wednesday, with the impact of news from U.S. and China trade talks at the end of last week also potentially moving the currency.

Retail sales is expected to show a 0.3% rise in September from 0.4% in August on a month-on-month basis, when data is released on Wednesday at 13.30 BST.

Core retail sales ares expected to rise 0.2% from 0.0% in the previous month.

The results could be important for assessing the impact of the U.S. economic slowdown on consumers who have so far stayed immune and given cause for optimism.

If retail sales come out lower-than-forecast it could suggest the slowdown is also seeping into the consumer space raising more serious alarm bells for the outlook. This would also have a more pronounced bearish impact on the U.S. Dollar.

At the same time, the data may lose some of its importance due a generally more upbeat outlook for the U.S. economy after the trade deal struck at the end of last week between the U.S. and China.

The deal was basically a trade off between the U.S. agreeing to delay the implementation of higher tariffs on Chinese imports on October 15 in return for China agreeing to purchase of US agricultural goods. Also part of the deal were some intellectual-property and currency measures and access for US financial services.

The agreement will take the edge off global growth concerns and potentially support the U.S. Dollar. The extent of the support is difficult to guess because the U.S. Dollar is also a safe-haven currency which gains support when the outlook for the global economy is negative - so there is also a risk the two may cancel each other out and it may have zero effect in the end.