- But would-be sellers waiting in wings as U.S.-China hopes fade.

- Societe Generale eyes move toward 1.10 as a selling opportunity.

The Euro advanced against all major rivals Wednesday amid an upbeat mood in markets that favoured so-called risk assets and non-Dollar currencies but would-be sellers are now waiting in the wings in anticipation of a fresh opportunity to bet against Europe's unified unit.

Investors were upbeat Wednesday following a pledge by the U.S. Federal Reserve (Fed) to take action on mechanical faults in interbank funding markets that have stoked unease among policymakers and analysts in recent weeks. The proposed actions will see the Fed reverse its balance sheet 'unwind', which had lifted the U.S. currency last year by effectively draining Dollars out of the domestic and global financial systems.

There is much about the Fed's proposals that's yet to be disclosed but a return to growth of the balance sheet means more Dollars washing around the financial system and potentially, a lower perceived value for those Dollars. That, and speculation in some parts of the market suggesting the Fed is covertly attempting to restart its quantitative easing program, explain why the greenback softened and the Euro-to-Dollar rate rose Wednesday.

"The US has imposed visa bans on some Chinese officials, shortly after blacklisting tech companies. Hardly an auspicious backdrop to trade talks, which resume at senior level tomorrow. Middle-Eastern tensions remain high and Brexit deal hopes are dwindling away. With little data on the calendar, the biggest discussion point may be whether the Fed's decision to relaunch asset purchases is ‘QE'," says Kit Juckes, chief FX strategist at Societe Generale. 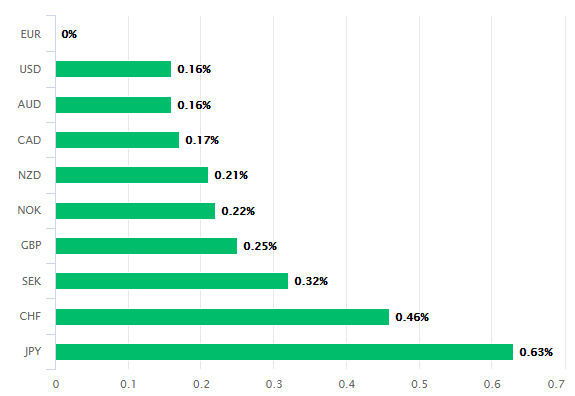 Investor relief over the Fed's pending actions on funding pressures was enough to see another provocative White House move against China go largely unrecognised by markets on Wednesday. The U.S. State Department said late on Tuesday it will impose visa restrictions on Chinese officials who, it's claimed, are involved with alleged human rights abuses in China's Xinjiang province.

There's been repeated allegations that members of minority populations are being subjected to "draconian controls on expressions of cultural and religious identities". The ban follows a Monday decision to add 28 Chinese governmental and commercial organisations to its 'Entity List' in relation to the same allegations. Exports of items subject to the Export Administration Regulations (EAR) to companies included on the list are forbidden.

"It's a very fine balancing act to avoid classifying what Powell announced yesterday as "not QE." The short duration of the assets being purchased is probably enough to distinguish between the Fed and the asset purchases that the ECB and other central banks are engaged in. But a bill repurchase program is still balance sheet expansion, and there is always going to be a slightly negative hue to balance sheet expansion for the currency in question (in this case the USD) - especially when investors are already long of that currency," says Stephen Gallo, European head of FX strategy at BMO Capital Markets. 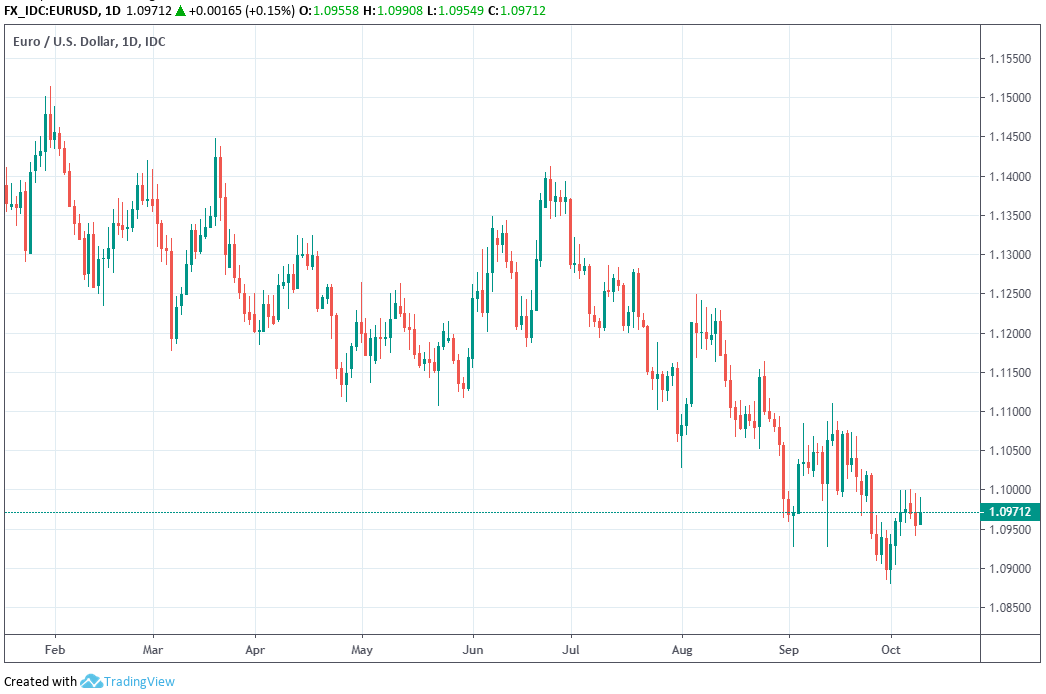 Both Gallo and Juckes says the Fed's move is not a restart of the yield and investor-return-crushing stimulus embarked upon after the financial crisis, while observing that actions set to be undertaken by the European Central Bank (ECB) from November onward are equivalent to exactly such a program. The ECB said last month it'll renew the easing program it only just stopped in December 2018, in a bid to revive Eurozone economic fortunes that have been badly damaged by the trade war, among other things.

The European Central Bank will buy €20 bn of European corporate and government debt per month from November 01 for a potentially indefinite period. It's hoping that governments, companies and households will borrow more in order to invest productively, likely lifting economic growth and enabling it to meet a long-elusive inflation target of "close to but below 2%" in the process. One side effect though, is that already-low bond yields will fall further and potentially make the Euro even more unattractive.

"Fed asset purchases aren't QE if all they buy are short-dated Bills, whereas the ECB's resumption of asset purchases, really is QE," says Societe Generale's Juckes. "Knee-jerk dollar softness in response to Jay Powell's comments yesterday may allow EUR/USD to pop its nose back above 1.10. But that may provide an opportunity to go short." 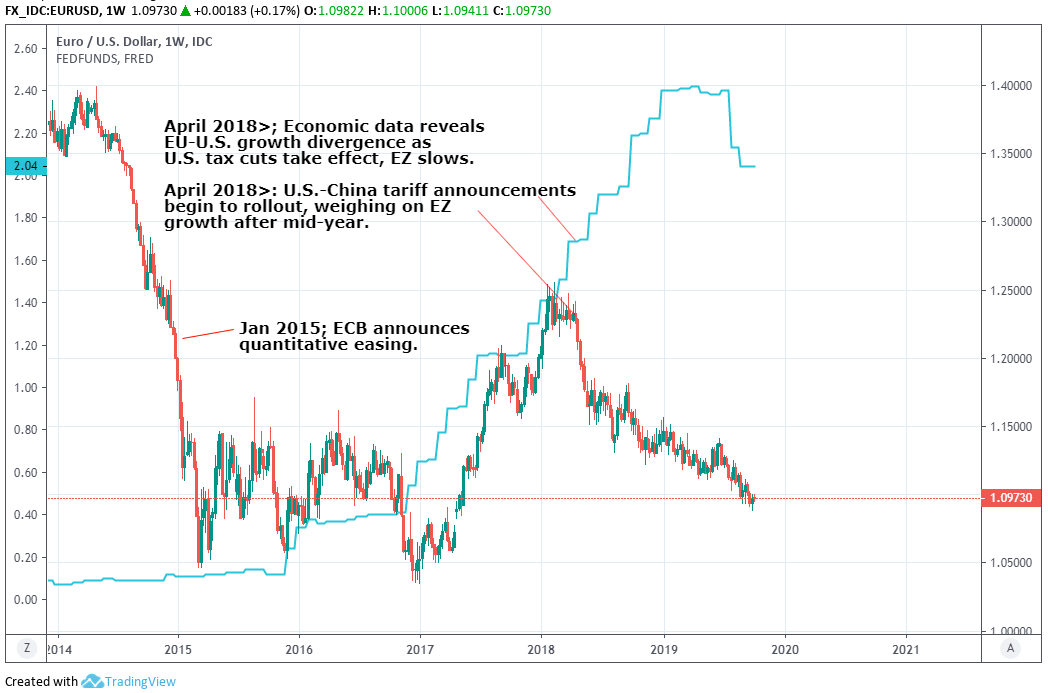 Juckes is contemplating whether to sell the single currency if the Euro-to-Dollar rate makes it back above 1.10 and has suggested he'd set a 'stop loss' at 1.11 if he does. The idea is not too dissimilar to one advocated by BMO's Gallo on Wednesday, although their respective motivations are different. While Juckes is anticipating that European Central Bank monetary policy will weigh on the Euro, Gallo is eyeing developments in the U.S.-China trade war.

Wednesday's visa ban came just days ahead of trade talks between the U.S. and China that it is hoped will avert an October 15 and December 15 increase in American tariffs on Chinese goods imports. The two actions from the White House this week, as well as a perceived gulf between the two sides' objectives in the forthcoming talks, have been said by many analysts and economists to lessen the chances of a deal being agreed.

"It looks like the focus for the rest of the week is going to be on US/China developments. We still think that there is more bad news than good news in the value of the USD, but also that the risk of things going wrong (or a stalemate) is higher than the risk of things going really well. This leaves us rather neutral on EURUSD and USDCNH in the short run. We'd much rather be buying USDs on both axes north of 1.1000 and at 7.1000, respectively, until something changes our minds," Gallo says.