- Risk the pair could roll over and go lower

The Euro-to-Dollar rate’s recovery has hit a roadblock and is stalling.

There is now a risk the pair could start to move lower again.

EUR/USD had been rising during the first week of October after posting new trough lows of 1.0879 on October 1. 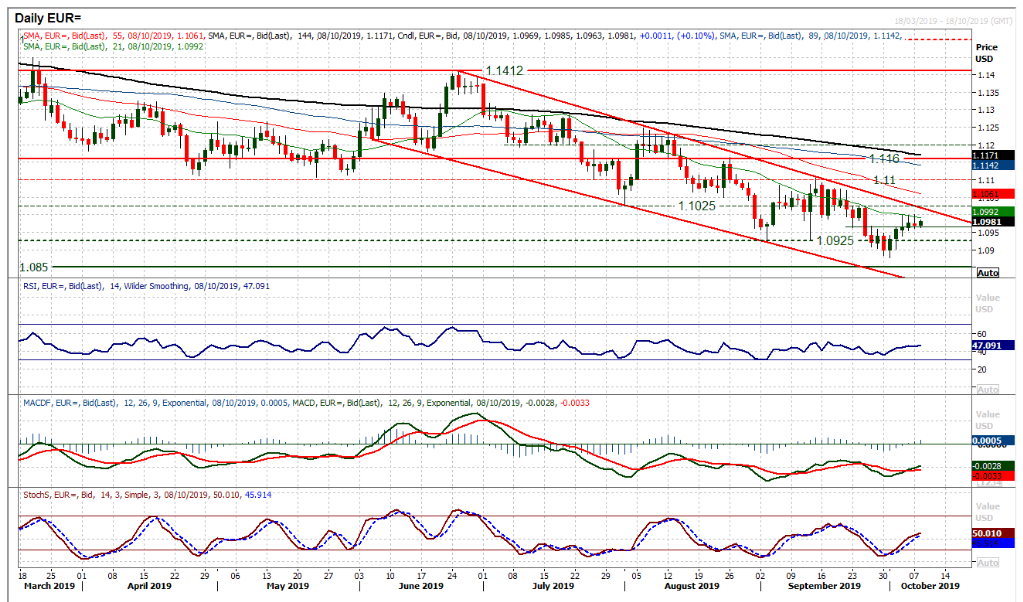 Yet that recovery rally appears to have run out of steam now after reaching the 21-day moving average (MA).

MA’s often act as resistance lines on charts and the 21-day seems to be particularly good at resisting EUR/USD, having capped gains on several occasions in the past. In many ways its an ‘old enemy’ for Euro bulls.

“A cautious consolidation has set in on EUR/USD. However, the concern will be that this is playing out under the falling 21 day moving average (at $1.0990) which has previously been a good gauge within the downtrend channel,” says Richard Perry, a technical analyst at Hantec Markets.

Perry sees a risk the pair will start a new cycle lower.

The fundamental cause as increasing pessimism over the outcome of trade talks between the U.S. and China set to kick off this Thursday.

“The risk certainly seems to be growing to the downside once more. Momentum indicators are rolling over around similar levels as previous bear rallies have failed too,” says Perry.

The small range of the past few days, especially between the daily open and close price is another warning sign the market could be peaking.

“Small bodied candlesticks reflect a lack of conviction in the market now, with the US/China negotiations clearly a factor,” says Perry, referring to the Japanese candlestick charting method which represents days graphically as ‘candlesticks’.

Yet overall Perry sees the market as characterised by a ‘lack of conviction’ to a certain extent in any direction - with a risk still remaining the up-move could resume too.

Indeed the pair is 0.25% higher on the day at the time of writing showing bulls are not yet completely out of the game.

“This is still a market lacking conviction, as the euro has ticked slightly higher into the European session,” says the market analyst.

Nevertheless, the inability of the market to hold above 1.1000 and its rebuttal by resistance from the upper boundary of the falling channel is not a very positive sign, and suggests bears have the edge overall.