- EUR/USD at 1.0940 into the weekend with plentiful sellers.

The Euro-Dollar rate is at risk of imminently snapping its long-term uptrend, according to analysts at Bank of America Merrill Lynch, and multiple other firms are now tipping the single currency to move lower throughout the final quarter.

Europe's unified unit must close the September month above the 1.10 level on Monday if its long-term uptrend is to be kept alive on the charts, Bank of America says, although the exchange rate was 60 points away from that level Friday. There were few signs of a catalyst that could push it meaningfully higher ahead of the weekend on Friday, leaving the heavy lifting to be done in the final trading session of the month on Monday.

"The longest-term log scale chart of EUR/USD shows a rising trend line connecting the 1985, 2001 and 2016 lows. Spot is currently trading below it as we head into month-end. A monthly close below 1.10 bearishly breaks this trend line. Assuming a reversal and close back above 1.10 does not occur in October, we think this break carries long-term bearish implications," says Paul Ciana, a technical strategist at Bank of America. 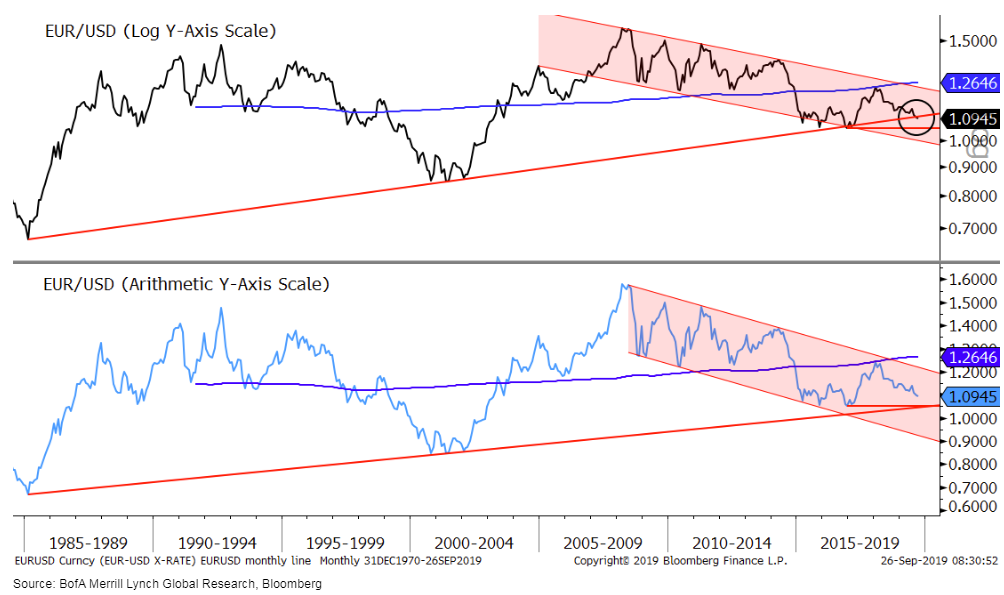 "The trend line on the arithmetic chart has not been tested or broken and resides at about 1.05 in 2020. Closing below this line would add further to a bearish conviction. (The weights used to determine the euro value on Jan 1, 1999 are applied to history to create data prior to launch," Ciana adds.

The Euro may have spent much of the last five years below the 1.1686 level it launched at on January 01, 1999 but from a cursory glance, at least appears to have averaged that rate since its flotation. And when weightings of the precursor currencies used to create the Euro, are applied retrospectively to the same currencies in order to calculate a historical exchange rate, a clearly defined uptrend stretching back over decades is revealed.

It's that decades-long trend that is now in danger of being broken and, potentially, reversed. Ciana's draws his insights from studies of trends and momentum on the charts. He's effectively blind economic data as well as the global politics that have had so much influence on the Euro-to-Dollar exchange rate in recent times, although fundamental analysts at Bank of America say those proverbial economic and political stars are also aligning in a manner that suggests more losses ahead for the Euro.

"The market has been focusing on the US-China trade talks, but we are also concerned about the US-EU trade talks. The market is underpricing the negative implications of a no-deal Brexit for the Eurozone," says Athanasios Vamvakidis, a strategist at Bank of America. "We forecast EURUSD to weaken further by the end of the year, to 1.08, with more downside if some of these risks materialize. We do keep our more optimistic long-term outlook and forecast EURUSD at 1.15 by the end of next year." 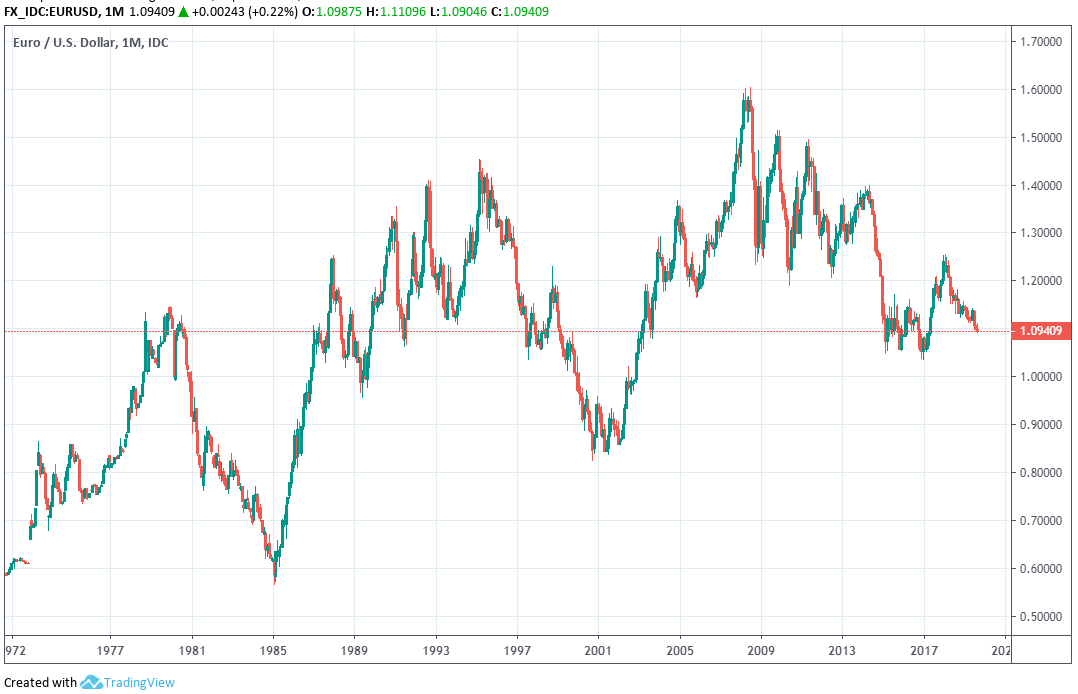 Vamvakidis is warning clients of the risks posed to the Euro by President Trump's tariffs as well as a possible 'no deal' Brexit. He says both those threats would have a significant impact on the Euro area economy but are currently being underappreciated by the market. The German and Eurozone economies could find themselves contending with an October 31 'no deal' Brexit, if one happens, just as a 180-day delay to a new 25% U.S. tariff on imports of cars from Europe is expiring.

President Trump announced and then delayed that tariff in May pending the outcome of talks aimed at reducing EU levies and opening up its agricultural market, but could seek to use the looming Brexit deadline and threat of his own tariffs to encourage EU concessions in the final quarter. However, there are other factors that are being tipped by others to push the Euro lower before Monday, risking keeping it trapped beneath the key 1.10 level on which the long-term uptrend depends.

"We think a dip in EURUSD below 1.0800 before the close today or Monday is a distinct possibility.That being said, we think the possibility of Trump impeachment proceedings is very palpable," says Stephen Gallo, European head of FX strategy at BMO Capital Markets. "It is not for us to make the final call on the BMO impeachment view (if there is one), but we would (again) trail the stop-loss in our short EURUSD trade (initiated at 1.0995) down to 1.0955 from 1.0975. We think a vote to impeach the president would initially weaken the USD across the board. Keep your stops tight."

BMO tipped the Euro-Dollar rate as a sell this week when it was trading around 1.0995 and is targeting a fall to 1.08 and below in the short-term in anticipation of continued weakness in the Euro and strength in Dollar exchange rates. U.S. interest rates are twice as high as most other rates in the G10 universe, which has made the U.S. bond market more or less the only game in town for yield hungry investors and bolstered the lure of the Dollar, leading many to tip the greenback for more gains up ahead. 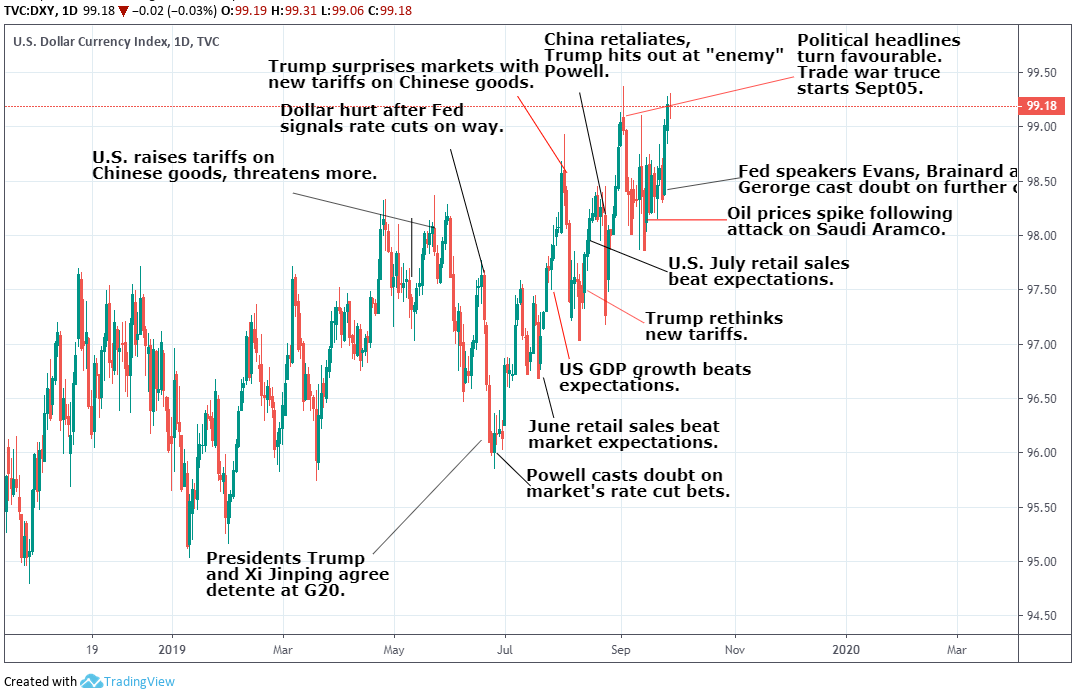 Above: Dollar Index at daily intervals, annotated for recent events.Click for larger version.

A looming Democratic Party attempt to impeach President Donald Trump is being flagged as a risk to the Dollar in the short term, although ultimately, opposition politicians will need a two-thirds majority in the Republican held Senate in order to successfully oust Trump via the impeachment channel. Bank of America and BMO are not alone in thinking the Euro-Dollar rate could be vulnerable to new lows in the short as well as long-term.

Barclays is forecasting that by late 2020, the single currency will have fallen to 1.03. That would be its lowest since just before the 2003 invasion of Iraq and a level that's close to parity with the U.S. Dollar. And technical analysts at Commerzbank also warned Friday of the prospect of further declines in the Euro-to-Dollar rate over the coming days.

The single currency needs to recover and hold above 1.10 before and until after midnight on Monday if Bank of America's bearish technical slide toward 1.105 is to be avoided. And Jones says "the topside remains capped by the three month resistance line at 1.1063" and that the Euro will continue to draw technically minded sellers so long as it sits below that level.