- USD tipped by Westpac for a breakout to a new high.

The Dollar advanced against many rivals Thursday but is being tipped by Westpac to breakout to a new high over the coming days, as U.S. bond markets continue to lure international investors who're hungry for 'yields' that are in such short supply elsewhere in the developed world.

Westpac says the Dollar index is poised to score a new high in the short-term because the risk of President Donald Trump being impeached and removed from office has been greatly overblown in the last week and the odds of more Dollar-negative interest rate cuts from the Federal Reserve (Fed) are lengthening. The Dollar index measures the U.S. currency against a basket of rivals, although notably the Euro, Yen, Pound Sterling and Canadian Dollar.

"DXY appears poised for a breakout to new highs near term. Trump impeachment is an overstated risk: the procedural steps to a resolution in the House are long and then there is the requirement for the Senate to vote by an almost insurmountable 2/3 majority. The prospect of a more gridlocked Congress is moot," says Richard Franulovich, head of FX strategy at Westpac. "The hurdle for another Fed insurance cut 30 Oct is understandably high too." 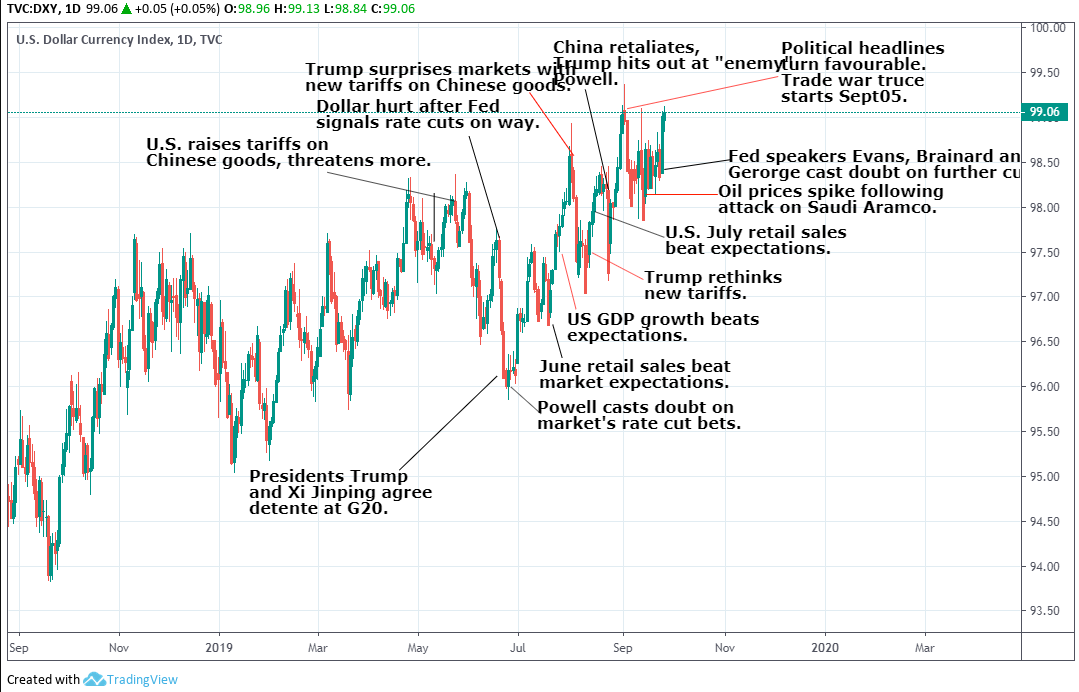 The single greatest risk to the 18-month long Dollar rally of late, has been the market taking a negative view of the Fed's earlier decisions to cut its interest rate, which now sits at 2% after having been reduced from 2.5% earlier in the year. Such moves should make the Dollar less attractive than other currencies but they've been accompanied by, and were the product of, a worsening global economic environment that's left the U.S. bond market looking like the only game in town for yield hungry investors.

U.S. rates are at least twice as high those of other major central banks with the exception of those in Canada and Norway, although both the latter countries have above-average rates by virtue of either their proximity to the U.S. economy or their significant exposure to a booming but volatile oil market. Most European rates are still close to their post-crisis lows while the China-exposed antipodean central banks have cut theirs to new record lows this year.

"DXY is little changed today but recent gains have brought it within striking distance of a fresh 2Y(+) high. Ultimately, the USD remains the best house in a bad G10 neighborhood. At the same time, we think funding pressures in some markets may also be contributing to dollar strength despite recent policy efforts to provide liquidity," says Ned Rumpeltin at TD Securities.

Without much steeper rate cuts from the Federal Reserve, or an economic recovery in another part of the world that enables other central banks to begin lifting their rates, the U.S. bond market could remain the only game in town to investors for a lot longer and the Dollar could go on strengthening.

The rub for President Donald Trump, as well as the forecasters out there who might be looking for a lower Dollar, is that both of those things have grown a bit more unlikely in recent weeks. The U.S. outlook has turned brighter given a September freeze of hositilities with China that has bolstered an already-resilient economy but Europe has, so-far at least, not got the memo.

"Even reliable 2019 voting dove Chicago President Evans said he doesn’t see a need for further cuts, while a relatively encouraging round of data of late (see over) will cement the FOMC’s central tendency for continued above trend growth," says Westpac's Franulovich. 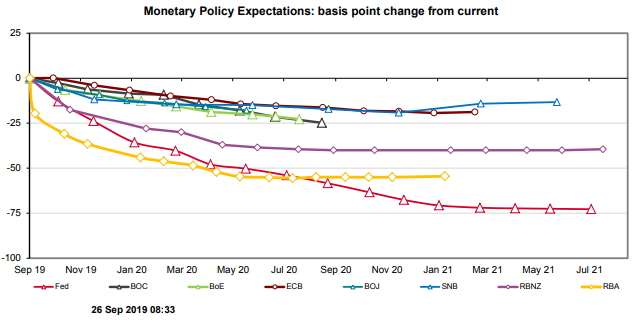 Bad news is still flooding in thick and fast from other parts of the world while inflation pressures are now stirring in the U.S., and managing those price pressures remains the Fed's foremost responsibility. The Fed may have cited weak global growth for its earlier rate cuts, but the full reason underlying those decisions was that slower U.S. growth would result from the global downturn and undermine America's inflation pulse in the process.

In other words, the Fed feared U.S. inflation would be too low further down the line when it cut rates in July and August. However, and since then, evidence suggesting that inflation pressures are actually mounting in the here and now has begun to stack up. This complicates the decision making process the Fed must go through and could be said to make further rate cuts a lot less likely than financial markets would have observers believe that they are.

"The core PCE deflator was unexpectedly revised up to 1.9% from 1.7%. The monthly detail behind this revision will be published tomorrow, but in the meantime the key point here is that the new data make it even more clear that the very modest 1.1% increase in the first quarter was a fluke," says Ian Shepherdson, chief economist at Pantheon Macroeconomics, referring to a derivative of the Fed's preferred measure of inflation. "The trend is near 2%, and we think Q3 is on course for 2.2-to-2.4%. The Fed’s new forecasts show core PCE inflation at 1.9% y/y in Q4 this year and next; those numbers are too low."

President Trump has repeatedly vented his frustration at the strength of the Dollar this year but the rub for him and some forecasters out there is that should the 'core PCE price index' jump when figures for August are released at 13:30 on Friday, then further rate cuts could become even more difficult to justify. And given the Dollar has set new highs even with investors betting heavily on a further three cuts before early 2021, there's no telling what it'd do if those bets were abandoned and bond yields rose further as a result.