- Euro to be moved by PMI data; U.S. Dollar by liquidity concerns

The Euro-to-Dollar rate is trading at around 1.1017 at the start of the new week, after rising 0.50% in the week before.

Studies of the charts are showing the short-term trend is sideways and likely to continue as such. The 4 hour chart - used to determine the short-term outlook, which includes the coming week or next 5 days - shows the pair oscillating within a sideways trend between the range lows at 1.0925 and the range highs at 1.1110. 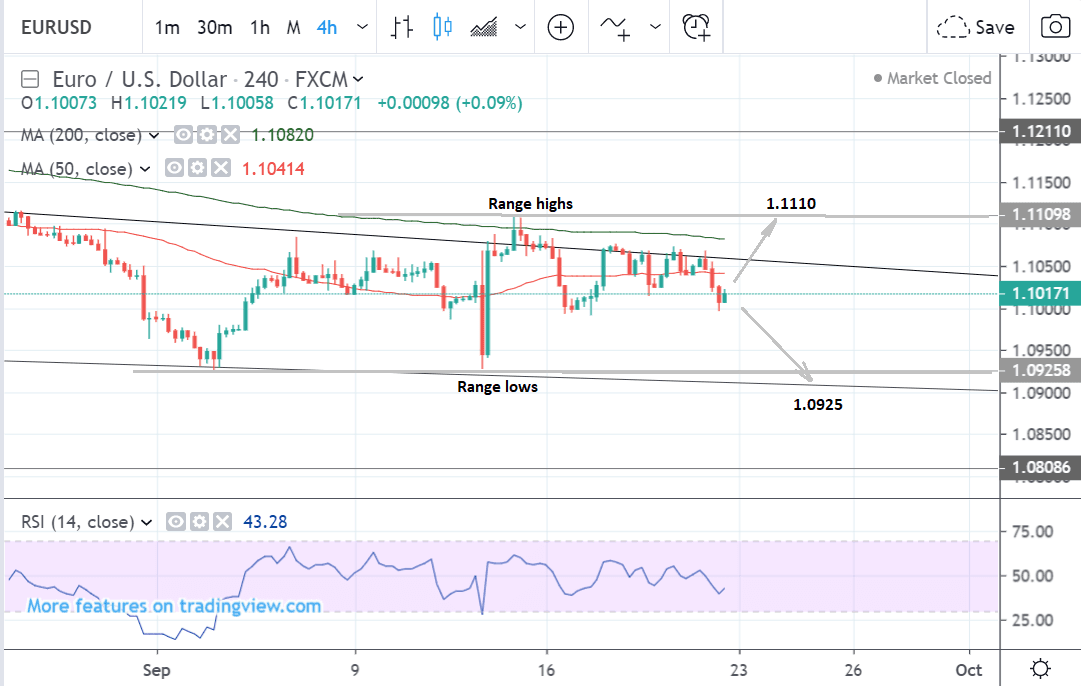 A clear break higher or lower would be required to give the trend direction.

The daily chart shows the exchange steadily declining in a downtrend. 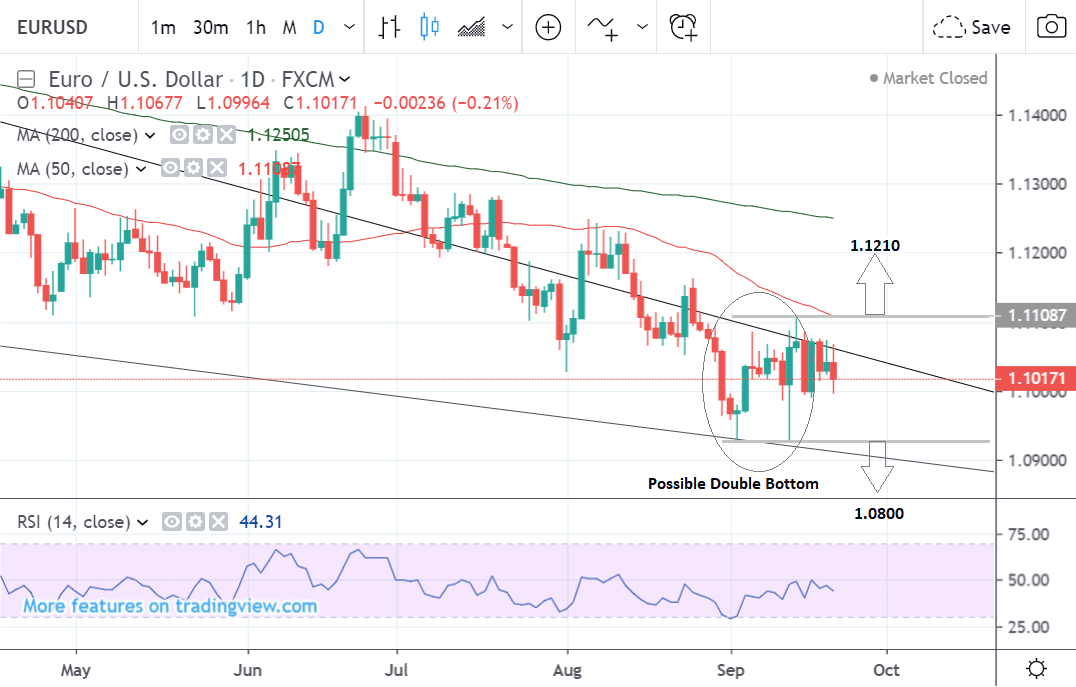 The pair may have formed a double-bottom reversal pattern at the beginning of September, which could be a bullish indication, suggesting more upside on the horizon.

However, it is not a very clear specimen of a double-bottom reversal and we therefore do not attribute a high level of confidence to this bullish observation.

A breakout of the range and the 1.1110 ceiling would probably lead to move up to an upside target at circa 1.1210.

Alternatively, a break below the range lows at 1.0925 would lead to a continuation down to a downside target at 1.0800.

The weekly chart shows the pair continuing to fall within the confines of the wedge pattern. 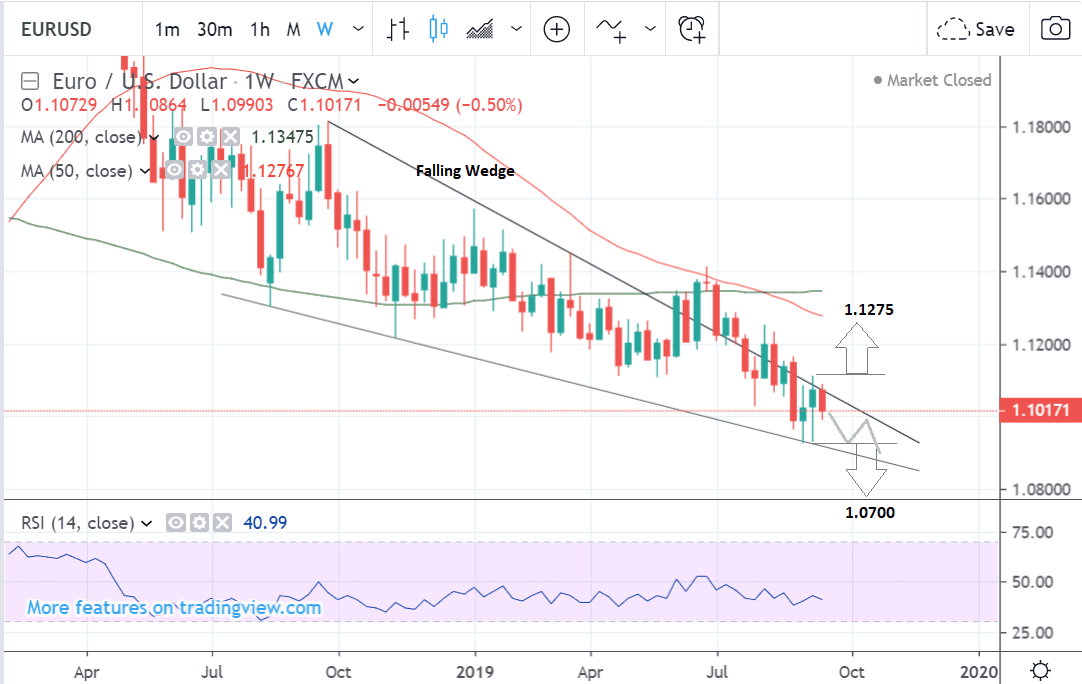 The pair could fall within the confines of the wedge pattern and taper to a point between 1.08 and 1.09.

If it breaks lower it could also fall to a potential downside target at circa 1.0700.

Likewise, a breakout higher would probably encounter resistance at the level of the 50-week MA at 1.1275.

As the wedge tapers there will be more chance of a volatile breakout - more probably higher than lower.

Momentum is flatlining further adding to the possibility of a volatile breakout on the horizon since periods of low volatility often precede periods of higher volatility.

The Euro: PMIs in Focus

The main release for the Euro in the week ahead is likely to be PMI activity data for the manufacturing and services sectors of the European economy.

PMIs are surveys of pivotal purchasing managers in companies which are considered good early warning indicators of wider economic growth.

Manufacturing PMI is expected to show a rise to 47.3 in September from 47.0 previously, when data is released at 9.00 BST on Monday.

The composite PMI is expected to remain unchanged at 51.9.

The main drivers of the U.S. Dollar in the week ahead are increasing concerns about liquidity constraints in the Dollar funding market, the negative impact of the yield curve inverting, economic data and an apparent drying up of global dollar liquidity.

A lack of money-market U.S. Dollar liquidity actually boosted the U.S. Dollar temporarily last week and the same is possible in the week ahead.

The demand for short-term credit peaked as businesses sought short-term loans to pay their taxes (tax day was on September 15), investors borrowed to buy U.S. government bonds, and the U.S. Treasury started rebuilding its emergency account.

This lack of ‘supply’ could persist supporting the Dollar in the week ahead, however, one of the factors, the tax deadline has passed.

Another potential risk factor for the Dollar is that the yield curve is inverting again as a result of the drone strikes in Saudi Arabia, pushing up demand for long-term U.S. treasury bonds, whilst expectations of deeper Federal Reserve rate cuts to the lower end of the curve have not materialised.

The yield curve describes the curve drawn by connecting the interest rates on loans of many different lengths, from overnight loans to loans of 30 years. Usually, rates are higher on longer-term loans but occasionally they invert, and this is negative for the Dollar and dangerous for the economy - it is also viewed as a reliable early warning indicator of recession.

On the data front, the main releases are on Friday when the Fed’s favoured inflation gauge, the personal consumption expenditure index (PCE), is released along with durable goods orders.

Despite having long been seen as a bugbear for the economy inflation tends to support the currency by pushing up interest rates which attract more inflows of foreign capital.

The same goes for core durable goods - or high price-tag capital goods - which are forecasted to rise 0.2% in August when data is released at 13.30 from -0.45 previously.