The Euro-to-Dollar rate is set to begin trading around 1.1072 this week after closing the previous one around 0.43% higher on Friday, although studies of the charts are suggesting the short-term trend will be a sideways one.

The 4 hour chart, used to determine the short-term outlook over the coming week, shows the pair oscillating within a sideways range between the 1.0900 lows and 1.1050 highs. This trend will probably continue unless there is a clear breakout from the range high or low. 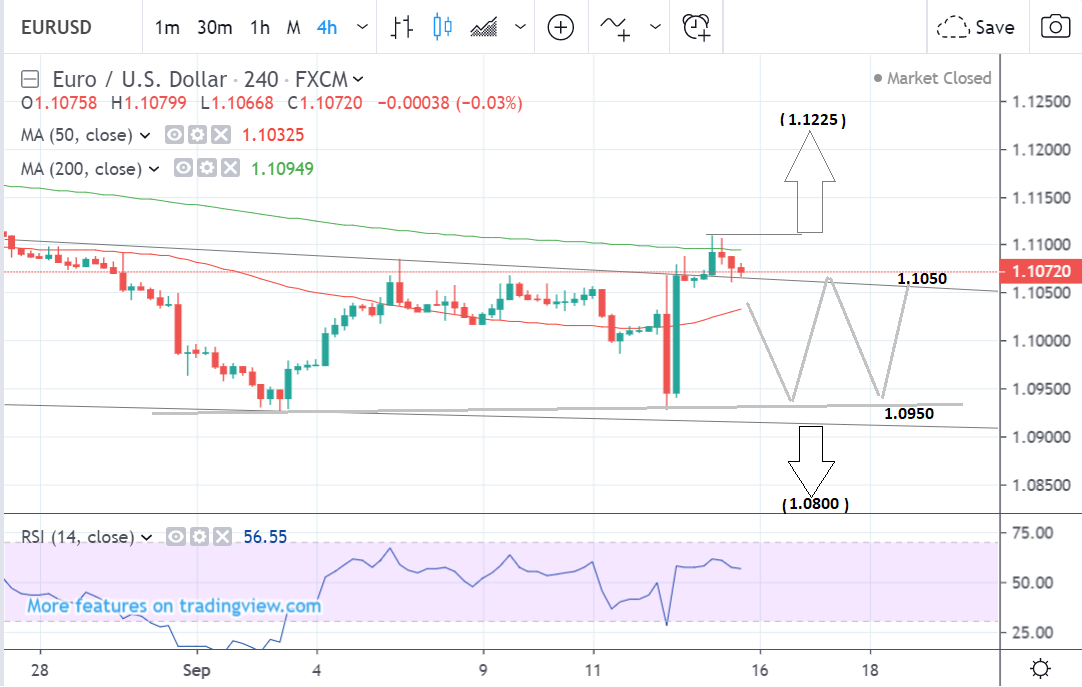 The daily chart shows the exchange rate trading sideways but also steadily declining in a falling wedge pattern. A continuation within the parameters of the wedge is probable and would see the pair fall to between 1.0900 and 1.1000.

Similar to the 4hr chart, however, there is also the possibility of a breakout of the confined range and a move up to an upside target at 1.1250, or a break lower to a downside target at 1.0750, although this not our base case. 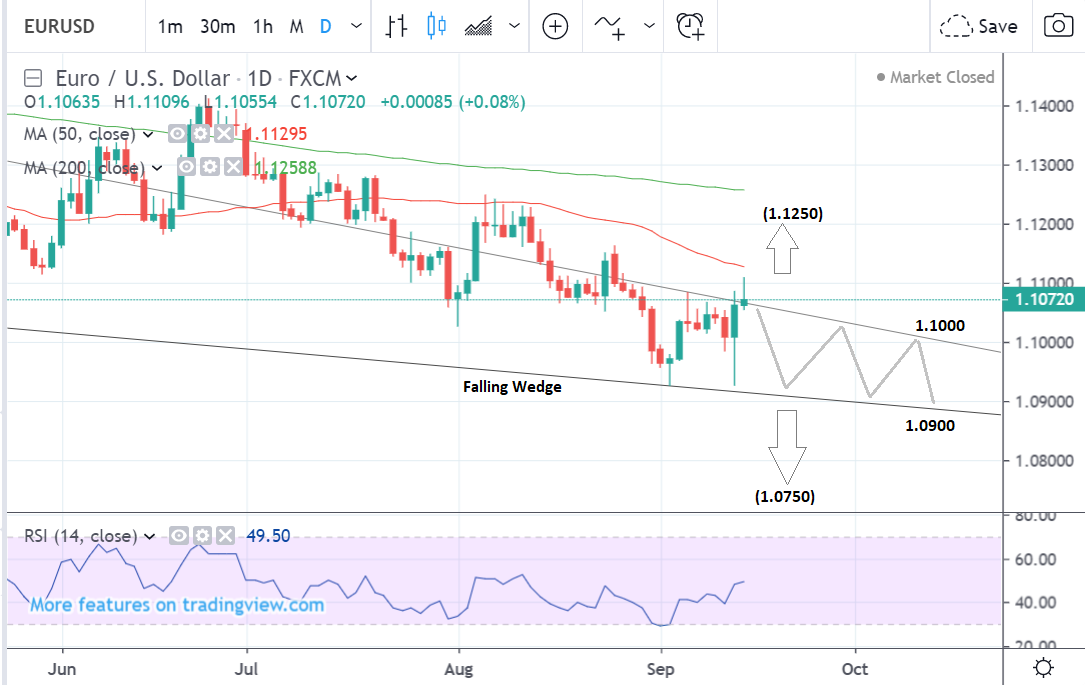 The weekly chart shows the pair potentially continuing to sell-off within the confines of the wedge pattern. This is likely to be an increasingly confined trading range as the wedge tapers to a point between 1.08 and 1.09.

As the wedge tapers there will be more chance of a volatile breakout in either direction. A break higher could see a move up to a target at around 1.1280 at the level of the 50-week moving average (MA).

Alternatively, a break lower could see the exchange rate decline to downside target at around 1.0700. The weekly chart is used to give us an idea of the longer-term outlook, which includes the next few months. 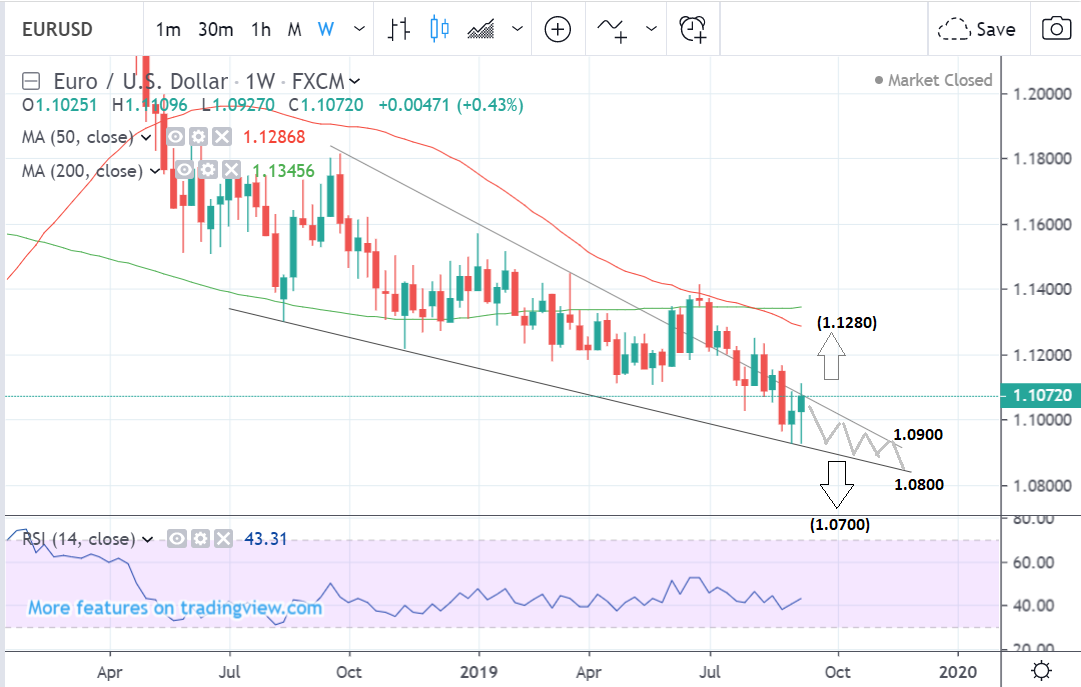 The main market-moving releases for the Euro in the week ahead are the ZEW sentiment index on Tuesday and inflation figures out on Wednesday.

The ZEW is an influential survey compiled from interviews with professional investors and is considered a good indicator of changes in the broader economy so it can often impact the Euro. The ZEW for September is forecast to rise to -38 in Germany, from -44.1 previously, when released at 10.00 on Tuesday.

The reported figure is the balance of optimistic and pessimistic survey responses, and both the German and the Europe-wide gauges are significant to the market. A better-than-expected improvement in sentiment would probably support the Euro and vice versa for the worse-than-expected deterioration.

The other key release is CPI although this is the second estimate of August CPI, rather than the more important preliminary or 'flash' estimate released at the start of each month. Headline inflation fell back to 1% this month and core inflation declined to 0.9%.

Both headline and core inflation figures are expected to be confirmed by this week's 'final' numbers. However, there is also a possibility the numbers are revised higher given the extent they've fallen recently, an outcome which would be positive for the Euro.

The main driver of the Dollar in the coming week is the Federal Reserve (Fed) interest rate decision and guidance due out on Wednesday at 19.00 London time. Most analysts expect the Fed to lower interest rates by at least 0.25%, but possibly by more.

A 0.25% cut is the current consensus expectation and has already been priced into Dollar exchange rates. A deeper 0.50% cut is also possible and would weaken the Dollar. U.S. data has been positive lately and this combined with easing trade tensions has lowered the odds of a large cut.

According to market gauges of rate expectations there is a 79.6% probability of a 0.25% cut at the meeting on Wednesday, and a 20.4% possibility of no-change. Lower interest rates are usually negative for currencies because they make the jurisdiction less attractive to foreign investors looking for somewhere to park their money., leading to lesser capital inflows and in some cases, outflows.

“The US central bank is widely anticipated to lower the federal funds rate by 25 basis points to a target range of 1.75-2.00% on Wednesday. But with the cut already fully priced in, investors will be more interested in the updated economic projections and dot plot,” says Raffi Boyadijian, an analyst at XM.com. “The easing in trade tensions has led to some paring back of aggressive rate hike bets in recent days but if the Federal Open Market Committee’s (FOMC) predicted rate path is still substantially above that of the markets’, Treasury notes are likely to be sold off, driving yields higher and in turn, the US dollar.”