- But fear later losses, look to sell on spike after ECB announcement.

The Euro advanced against most of its major rivals Monday as investors continued to chase 'risk assets' higher in the wake of another detente between the U.S. and China while also celebrating the latest developments in the Brexit saga, but Thursday's European Central Bank (ECB) policy decision risks spoiling appetites for the currency.

European Central Bank President Mario Draghi is widely expected to announce a reduction in the already-negative Eurozone deposit rate at 12:45 London time Thursday in what will be his last announcement on behalf of the bank. The ECB is also seen as likely to restart the quantitative easing program that it only just wound up back in December 2018 as part of an effort to meet its inflation target by stimulating the economy with lower borrowing costs.

"Our expectations for a more-dovish ECB puts downside risks back into view for EURUSD, with renewed QE as the main headwind. Prospects for a sustained move lower depend more on future signals, however, as much of the Fed/ ECB policy divergence may already be priced. Ahead of the meeting, we expect the 1.0925/1.1075 range to remain intact," says Ned Rumpeltin, European head of FX strategy at TD Securities.

Any decision by the ECB to cut rates and resume buying European bonds would see the returns offered to investors in Eurozone financial assets reduced during the months ahead, potentially leading them to cash out of their investments and walk away from the bloc. That would typically be enough to see the Euro fall but there's significant uncertainty over whether the bank will meet now-elevated market expectations for action, which could mean the Euro ultimately continues to advance. 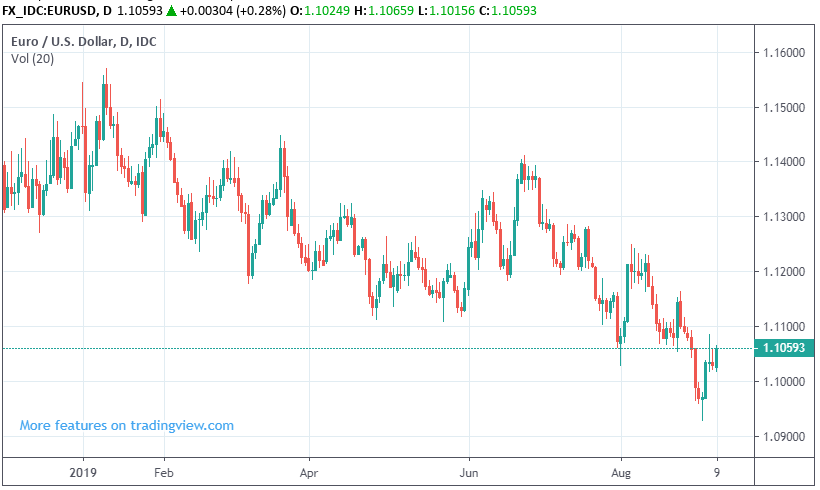 The ECB told markets in August that it had tasked staff with devising a way for it to cut the deposit rate, which is the rate it charges commercial lenders to deposit money with it, without harming the profitability of Eurozone banks. The ECB used to pay investors who parked cash with it overnight altough since 2015 its charged them a steadily increasing amount in an effort to put idle capital to more productive uses.

"EUR is experiencing a risk-on wave, but the structural and cyclical story remains negative. Christine Lagarde is probably no panacea for these problems, but some hope she will push for fiscal reform/spending. We think the ECB will be a “buy the rumour, sell the fact moment” and afterwards provide fresh entry levels for EUR/USD shorts," says Jordan Rochester, a strategist at Nomura.

Expectations of ECB action have mounted in recent months as official data painted an economic picture that showed the growth outlook getting "worse and worse", in the words of outgoing ECB chief Mario Draghi whose set to be replacing by former International Monetary Fund boss Christine Lagarde when his term ends next month. Growth has slowed notably in the Eurozone this year as it contends with a litany of headwinds that look set to go on buffeting it for a while yet.

President Donald Trump's trade war with China, which escalated again in August and early September only for a round of October talks aimed at negotiating a de-escalation were hurriedly announced last week. U.S. tariffs, which now cover almost all of China's annual exports to America, have hurt the world's second largest economy and put a dent in Chinese demand for products made in German factories. 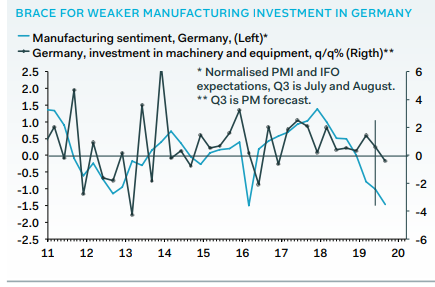 Germany's economy is now tipped to be knocking on the door of a 'technical recession' in the current quarter after industrial production figures published by Destatis last week showed the recession in the manufactruring sector deepening again at the beginning of July, which also coincides with the beginning of the third quarter. And that month was before the August-September escalation that saw President Trump begin targeting all the Chinese exports to the U.S. not yet covered by punitive levies.

President Trump imposed a 15% tariff on the remaining $300 bn of Chinese on September 01, with around half of those levies already going into effect on that date and the remainder now scheduled to be implemented on December 15. Talks announced last week could yet avert the latter tariffs but they'll do little to prevent the September 01 levies from further threatening the ailing Eurozone economy.

"An ultra-loose monetary policy by the ECB might possibly result in US tariffs against Europe. In my opinion, the ECB might not live up to the market's expectation," says Marc-Andre Fongern at MAF Global Forex. "Europe's export-dependent economy remains at risk, particularly against the backdrop of an ongoing trade conflict. Consequently, the dollar is unlikely to depreciate significantly against the euro over the coming weeks...The trade war remains the key reason for a buoyant greenback." 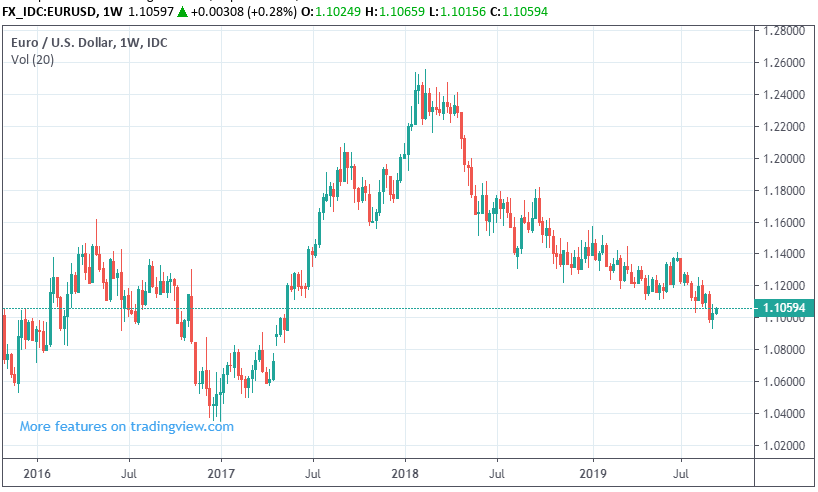 Changes in rates are normally only made in response to movements in inflation, which is sensitive to GDP growth, but impact currencies because capital flows tend to seek out the most advantageous or improving returns. Rising rates typically draw investment flows toward a currency whereas falling rates have the opposite effect.

Economic headwinds are intensifying in the Euro area at a time when inflation has been below the ECB target of "close to, but below 2%" for years, and at a point when the Eurozone growth pulse was already insufficient for generating a sustainable increase price pressures. Core inflation, which is the measurement of price pressures most preferred central bankers, has not been above 1.4% in all of the time since the debt crisis and has recently fallen below 1%.

Meanwhile, Eurozone GDP growth is forecast by the European Commission to come in at just 1.2% for 2019. This is below what the ECB's calls 'potential growth' and estimates to be around 1.25%, which means the economy is not currently growing fast enough to generate any inflation pressures at all. This is why markets now expect the ECB to take action on Thursday.

"We think the vast majority of investors know "the game is up" on the ECB's ability to trigger sustained nominal growth and the "good sort" of investment. Most central banks are merely just buying time when it comes to pumping additional stimulus into the system. But the pressure on the ECB is arguably greater because of the financial and economic difficulties inherent in the political construct known collectively as the Eurozone," says Stephen Gallo, European head of FX strategy at BMO Capital Markets. "We had expected the ECB to be more aggressively "dovish" in July and we were wrong. Therefore, we've now concluded that the result will be a piecemeal approach." 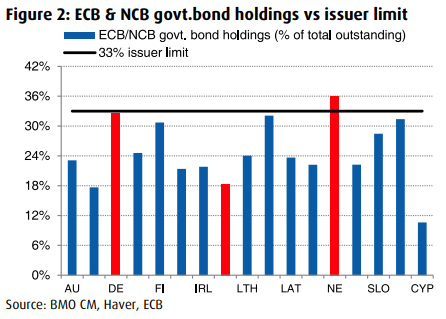