- U.S. rates have further to fall and weaken USD

The Euro-to-Dollar exchange rate will stay above 1.10 as long as the European Central Bank (ECB) does not go into overdrive when it tries to reflate the economy in September, says ING, the Dutch-based lender and global investment bank.

The continued climate of sluggish growth and subdued inflation in the Eurozone has heightened expectations the ECB will intervene with more stimulus at its September meeting, but for the exchange rate to fall materially it will have to ‘over-deliver’ on stimulus compared to current market expectations, says ING.

Given market expectations of how much the ECB will stimulate are already high, ING’s analysis suggests a heightened risk the ECB might ‘under-deliver’ and, since stimulus is negative for the Euro, that EUR/USD could rise.

Stimulus in the form of quantitative easing - or money printing - is negative for the Euro because it increases liquidity and supply, diluting unit value of the currency.

It is also negative for the Euro when the ECB lowers interest rates because it reduces net inflows of foreign capital since foreign investors prefer jurisdictions where rates are higher and they can earn more interest on their capital.

A cut in the deposit rate - the rate which the ECB charges commercial banks to look after their cash - is the most likely scenario in September, according to the market which is now pricing in a very aggressive 30 basis point cut down to -0.70% from a current level of -0.4%, says ING.

This would be above the usual 0.25% sized tranche central banks usually opt for when altering rates.

The especially aggressive market expectations have probably been caused by the bigger-than-expected cuts made by central banks last week, when the Reserve Bank of New Zealand (RBNZ) and the Reserve Bank of India (RBI) both cut by larger than expected 0.5% and 0.3% margins respectively.

Cutting rates is unlikely to damage the Euro as much as quantitative easing. In the worst-case scenario of a deposit rate cut to -0.7% the rate would fall close to its ‘floor’, says ING, suggesting further cuts are unlikely.

Deeper cuts are unlikely because negative rates are bad for commercial bank profitability because there is not as much room for bank lending margin. Given this is already an issue for the weak Eurozone banking system it is unlikely the ECB could want to worsen the situation.

The U.S. Dollar, on the other hand, is relatively more scope for weakness from rate cuts since interest rates in the U.S. are higher at +2.25%. This is a further support to the EUR/USD exchange rate.

According to ING, if anything is going to really weaken the Euro it would be ‘over-delivering’ on QE. QE involves the ECB in buying government and corporate bonds from banks and thereby injecting liquidity back into the financial system. There are a wide range of expectations on the level of QE the ECB might institute, from 10bn at the lower end to 45bn Euros a month at the upper end.

For the ECB to ‘over-deliver’, according to ING’s definition, they would probably have to increase QE by more than 30bn. Above that level it would start to push EUR/USD lower.

“The ECB needs to over-deliver on the QE front in September to push EUR/USD below 1.10 and offset the current ongoing dovish repricing of the Fed,” says ING.

The market’s dovish outlook for U.S. monetary policy is a further upside driver which is likely to keep EUR/USD above the 1.10 mark, adds ING. 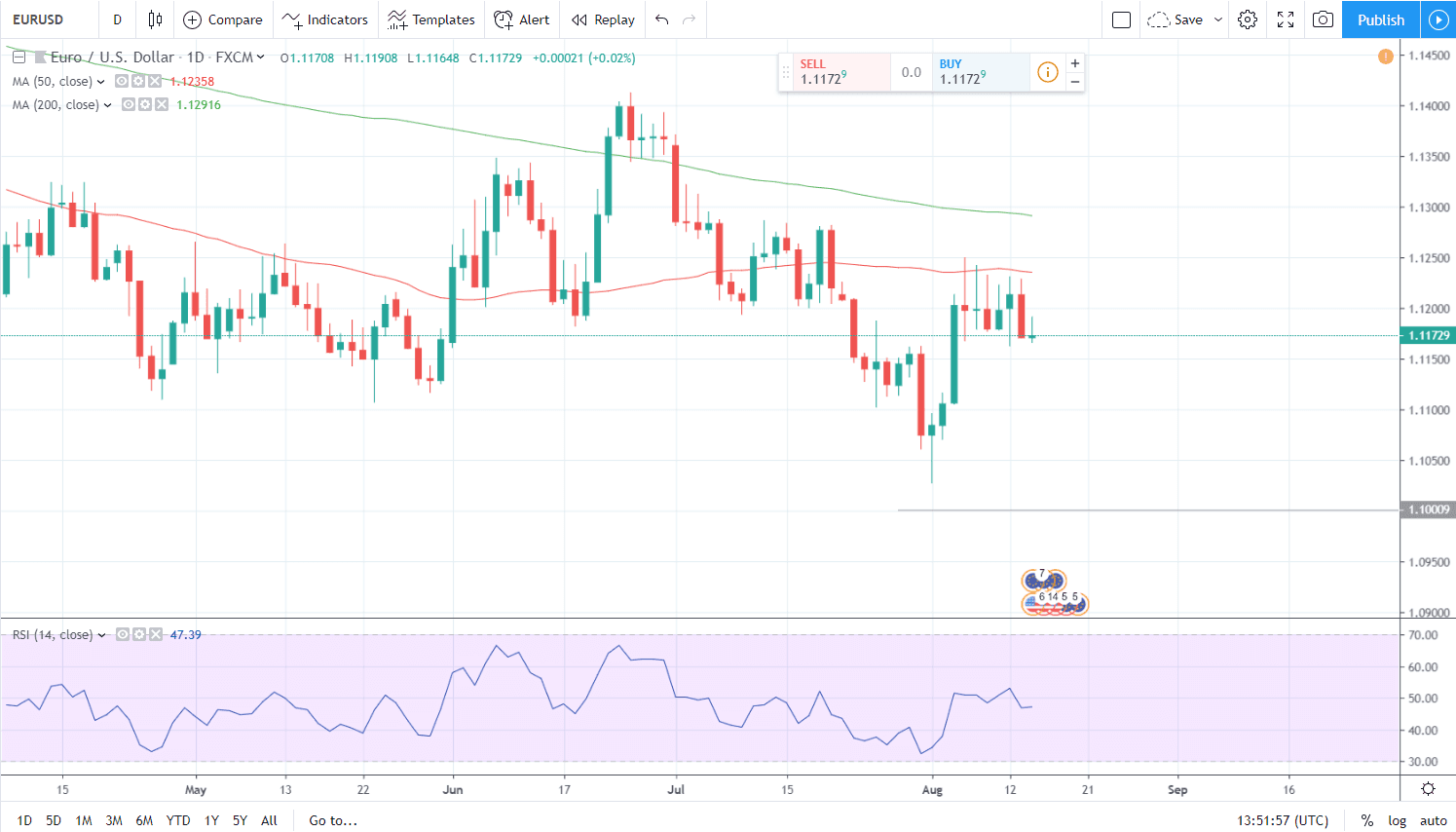 The pair weakened recently after markets began to price in the possibility the Fed may have enacted a ‘one and done’ insurance rate cut when the Fed cut interest rates by -0.25% at their August meeting.

Now, however, fears are mounting that the slowdown in global growth will impact more heavily on the U.S. economy and mean the Fed makes more rate cuts in the future. Given the negative impact this is likely to have on the Dollar it is the other contributing factor in ING’s forecast that EUR/USD will remain above 1.10.

A further support to the EUR/USD pair is that it is currently at ‘fair value’ estimates, based on the bank’s proprietary models.

“This supports EUR/USD for now – which is currently trading close to its short-term financial fair value,” says ING.