- Analysts look for USD strength into year-end, and EUR to weaken.

- TD says selling EUR it's 'trade of the week" for second time running.

The Euro was sold at the beginning of the new week as the Dollar rebounded from earlier losses, but analysts at Nordea Markets, Westpac and TD Securities say the single currency could fall further in the weeks and months ahead.

Monday's morning session saw the Dollar rise broadly after having been buffeted in Friday trading by President Donald Trump, who suggested that another round of trade talks with China might not happen. This led markets to fear that new tariffs planned for September 01 could actually go into effect and stoke a further increase in tensions between the world's two largest economies, which is supportive of the safe-haven Dollar relative to 'risk' currencies.

Meanwhile, the Euro is falling from already-limited favour among investors as political uncertainty on the European continent ratchets higher again, with officials in Brussels now facing a perfect storm of threats that look set to buffet the single currency at the same time this autumn. Italians now appear set to head back to the polls some time near to the end of October, just as the Eurozone is confronting a possible 'no deal' Brexit and prospect of its very own trade war with President Donald Trump's America.

"The growth outlook remains one of the key drivers and the escalation of the trade wars should magnify this theme. The ECB is more likely to harm than boost growth but that won't stop them from trying. Given the EUR remains unchanged from last week, we roll our short EURUSD position for this week's Trade-of-the-Week," says Mark McCormick, head of FX strategy at TD Securities. "We target a move to 1.1010." 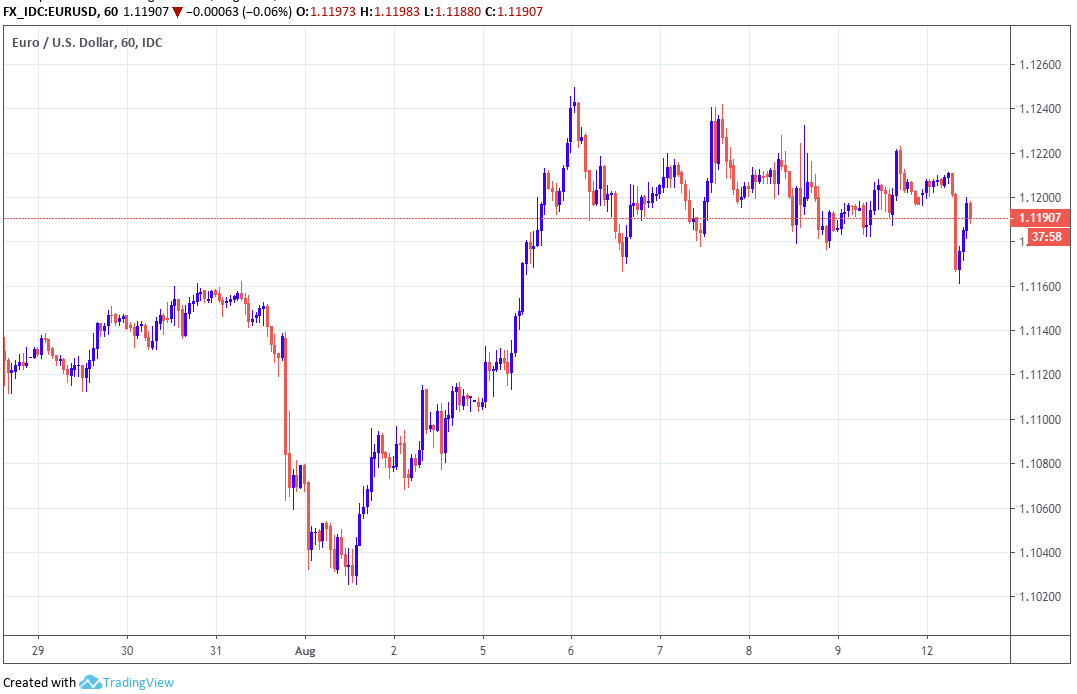 Prime Minister Boris Johnson is sticking to his guns and insisting the EU scrap the so-called Northern Irish backstop from the withdrawal treaty negotiated with his predecessor or face the UK leaving without formal arrangements, which could put an immediate hole in bloc's budget and disrupt trade with one of its most important markets. The October 31 Brexit day coincides closely with the end of a six-month delay to possible U.S. tariffs on cars imported from Europe.

In May the White House gave the European Commission and Japanese leaders six months to negotiate satisfactory arrangements relating to the auto trade and to open up their agricultural markets to American farmers or face new tariffs being imposed on cars exported from Europe and Japan to the U.S. That would further imperil an already-beleaguered German manufacturing sector, while also threatening growth and jobs in other European economies.

These Autumn risk factors are expected to begin bearing down on the common currency barely more than a month after the European Central Bank (ECB) takes radical action to resuscitate the economy and as Italians head back to the polls, risking a perfect storm of adverse conditions buffeting the Euro all at once.

"Italy's Salvini has called for a new election, possibly for October 23," says Andreas Steno Larsen, a strategist at Nordea Markets. "Should Lega get 40%, he might even govern alone. If not, Lega could able to form a right-wing coalition, arguably paving the way for an even tougher line vs EU. While the parliament is currently on summer holiday, it could conduct a no confidence vote next week. A pick-up in political uncertainty might further weigh on banks and add a headwind for the EUR."

A dispute between the ruling League and M5S parties over an infrastructure project came to a head last week, leading Deputy Prime Minister and leader of Italy's largest political party, Matteo Salvini, to begin pushing for a no confidence vote in his own government so another general election can be held. The move is aimed at freeing Salvini and the League, which has the highest share of the national vote in opinion polls, of their M5S coalition partner. 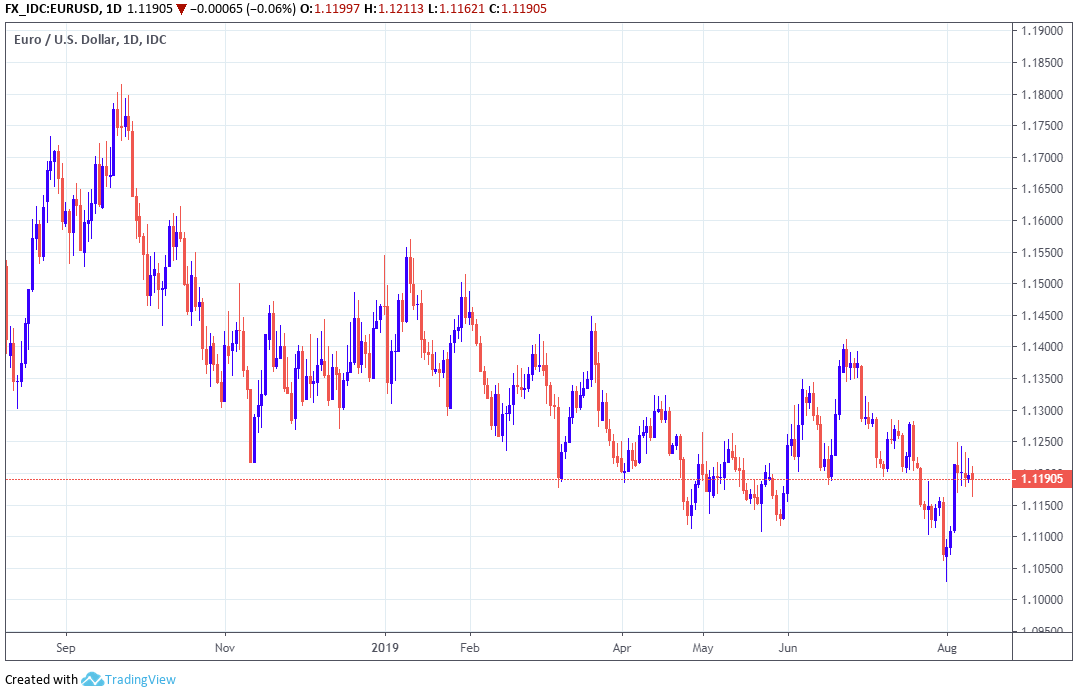 "While we had hoped for signs of stabilization in the EA by now as a weaker EUR, lower rates, and improving M1 growth has pointed in the direction of improving sentiment, this seems to be more than fully offset by other factors. The list of which is fairly long," says Larsen. "Eurostoxx banks as well as EUR/CHF indicate that EUR/USD should be vulnerable to catching down. We go short EURUSD with a target of 1.0975."

Another Italian election threatens to enfranchise Salvini with an absolute majority in Rome and a new mandate for confrontation with the EU over fiscal rules that require all governments to impose continued austerity measures on the population irrespective of government manifesto commitments. Such confrontations often lead to speculation about Italy's place in the EU, its continued use of the Euro and the survival of the Eurozone. This is just one of the headwinds facing the single currency.

"The USA is still outperforming like crazy – which is generally good news for the greenback. Forward-looking US growth expectations has come down, but only marginally so. It’s also worth highlighting the usual (disturbing) pattern in the US economic surprise index. It looks to have bottomed this summer, as it usually does, what if it’s ripe to head higher as well? US data usually improves during autumn," Larsen adds.

Larsen says Europe's economic woes, which are expected to yield another volley of European Central Bank interest rate cuts and quantitative easing measures in September, and the looming spectre of a possible 'no deal' Brexit taking place at the end of October are both factors that could weigh on the single currency in the weeks and months ahead. Nordea told clients Monday to bet on a fall in the Euro-to-Dollar rate.

"The past year has shown that disruption from the Sino-US trade war has had an outsized effect on Europe’s open economy versus the more-insular US – total external trade equates to 51% of GDP for the Euro Area compared to 27% in the US," says Elliot Clarke at Westpac. "Even after our forecast three cuts in the federal funds rate to 1.375% at December, US treasuries will remain a high-yielding safe-haven asset, further aiding the US dollar." 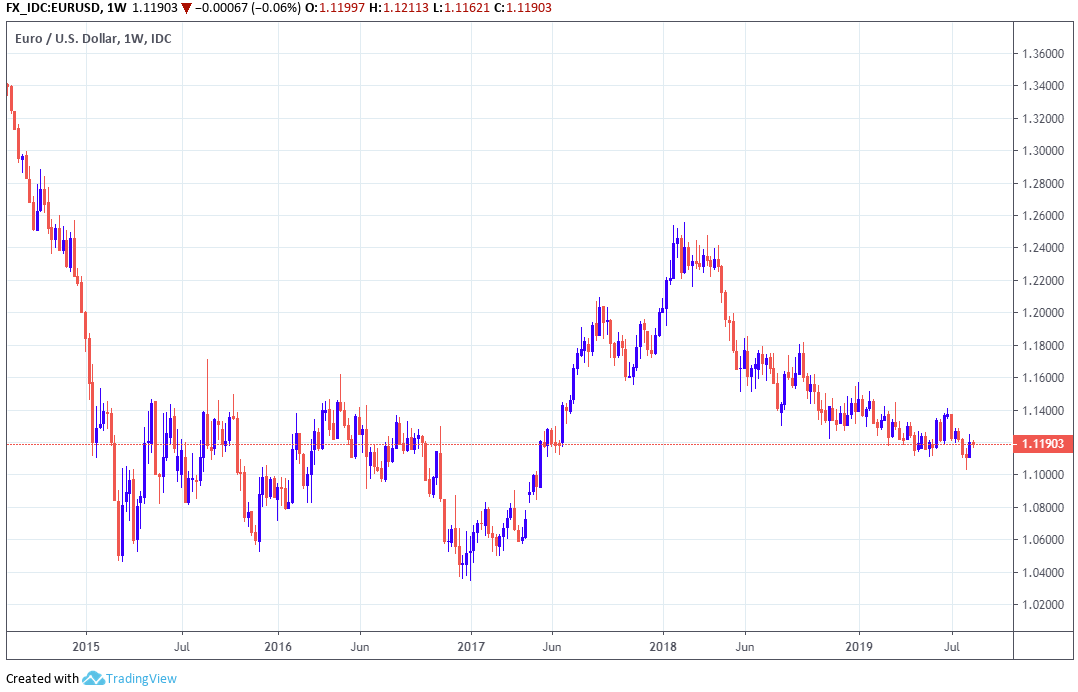 Previously, most analysts had said that interest rate cuts at the U.S. Federal Reserve (Fed) would sink the greenback this year and enable the Euro-to-Dollar rate to rise but with the ECB now expected to push all of its interest rates lower still, many have now abandoned those forecasts. This is expected to weigh on the single currency at the same time the U.S.-China trade war is morphing into what Larsen describes as "cold war 2.0".

"The unraveling of the EM carry trade offers knee-jerk upside in EUR. However, this short-term positioning bounce has to contend with the cyclical position of the Eurozone. There are still essential links between the Eurozone and Chinese growth that reinforce the weak cyclical outlook," warns TD's McCormick.

Trump told reporters outside the White House that a September round of talks aimed at ending the trade war may not happen, just days after declaring China a 'currency manipulator'. He was quoted by Bloomberg News saying "“If we do, that’s fine. If we don’t, that’s fine.” The People's Bank of China (PBOC) let its currency depreciate last week by raising the midpoint of the permissable USD/CNY trading band above the psychologically important 7.0 level.

The midpoint was set at 7.1136 Friday, although the PBOC reduced it to 7.0211 on Monday. The original move lower prompted speculation the bank was attempting to offset a 10% tariff announced by the White House just a week before by making its currency cheaper for Americans to buy. That would risks worsening a trade conflict that's already driven the Eurozone economy, with its large and China-exposed manufacturing sector, into the ground. This is an ongoing risk for the Euro.

"With those factors in mind, our base case is for Euro to depreciate to USD1.08 end-2019 and hold that level until at least mid-2020. Even after Euro begins to recover, only a slow drift higher is anticipated, as growth remains around trend, inflation well below target, and risks to the outlook keep the ECB on guard. At end-2020, we see Euro at only USD1.11 – below current spot," Clarke says. 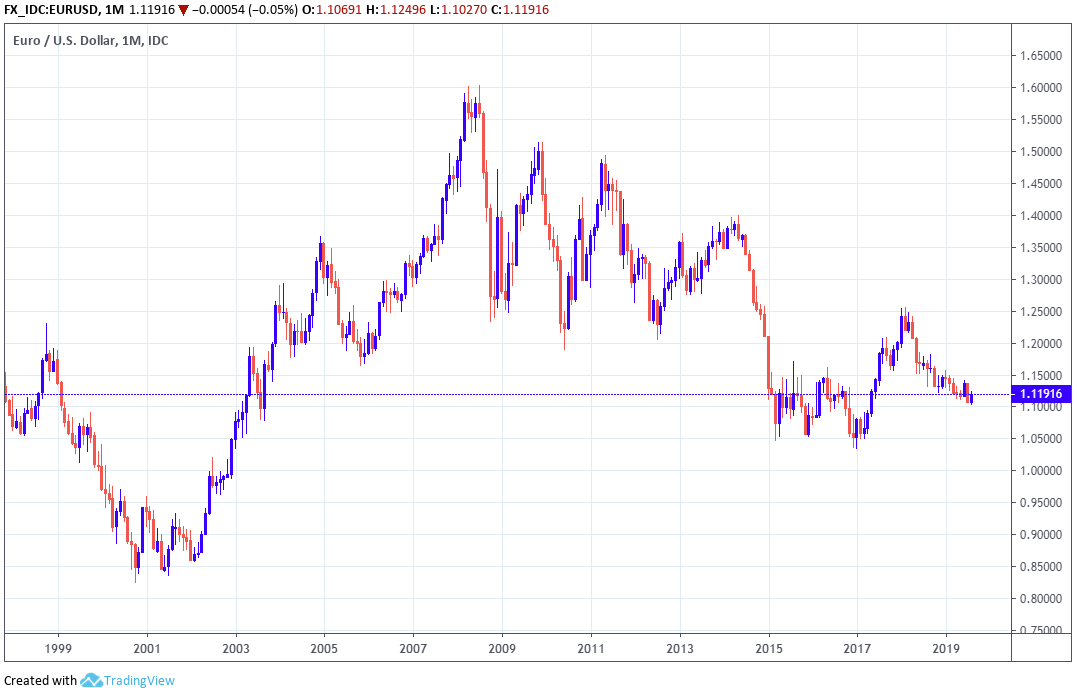