- Euro to be moved by Germany Factory data; Dollar by non-manufacturing ISM

The Euro-to-Dollar rate is trading at around 1.1106 at the start of the new trading week, after falling 0.17% in the week before. Studies of the charts are showing mixed signals but given the downtrend is dominant the exchange rate will probably continue to weaken in the week ahead.

The 4-hour chart - used to determine the short-term outlook, which includes the coming week or next 5 days - shows the pair pulling-back in an established downtrend. 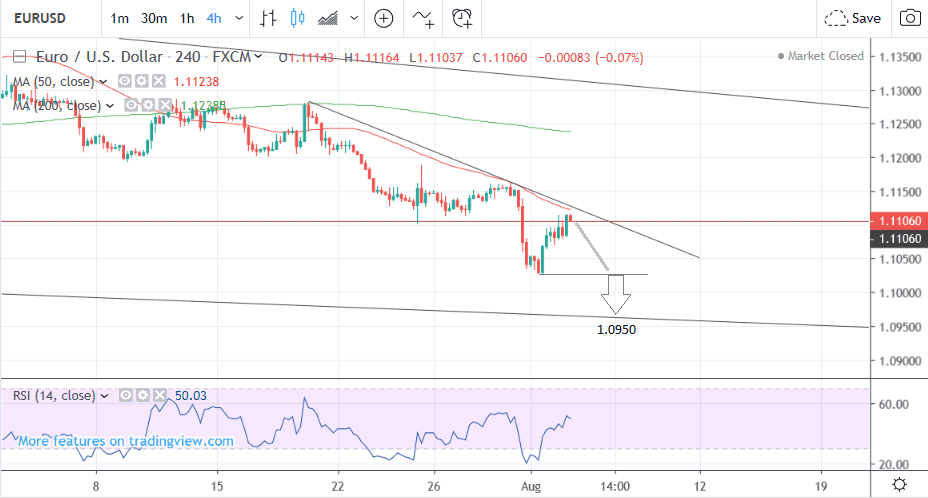 Although the pull-back is quite sharp and could be the start of a reversal, it is yet to fully evolve and the overarching downtrend has the upper-hand, biasing the outlook to expecting more downside.

A break below the 1.1027 August 1 lows would, therefore, confirm more downside to a target at around 1.0970, at the lower border of the large falling wedge the pair has been in since the start of 2018.

The daily chart - used to give us an indication of the outlook for the medium-term, defined as the next week to a month ahead - shows how the pair has been declining since the June highs and how last week it broke below the April/May lows, which is a further bearish sign. 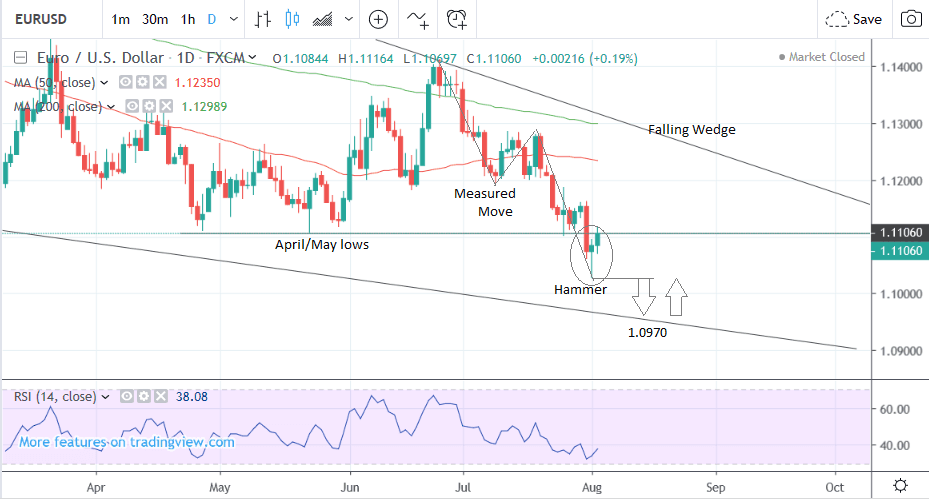 The downtrend is likely to continue due to the principle that the already established trend is more likely to extend than not. A break below the August 1 lows at 1.1027 would provide confirmation of more downside to a target at 1.0970 at the lower border of a falling wedge.

There are two signs the pair may be undergoing a reversal higher: the first is that it has formed a hammer candlestick pattern at the August 1 low, and the second that it may have just completed a 'measured move' pattern, which is a three-wave zig-zag pattern in which the 1st and 3rd waves are of a similar length.

Despite these signs the downtrend remains dominant and intact, and likely to continue, conditional on a break below the 1.1027 low.

The weekly chart - used to give us an idea of the longer-term outlook, which includes the next few months - shows the falling wedge pattern at the end of a downtrend. 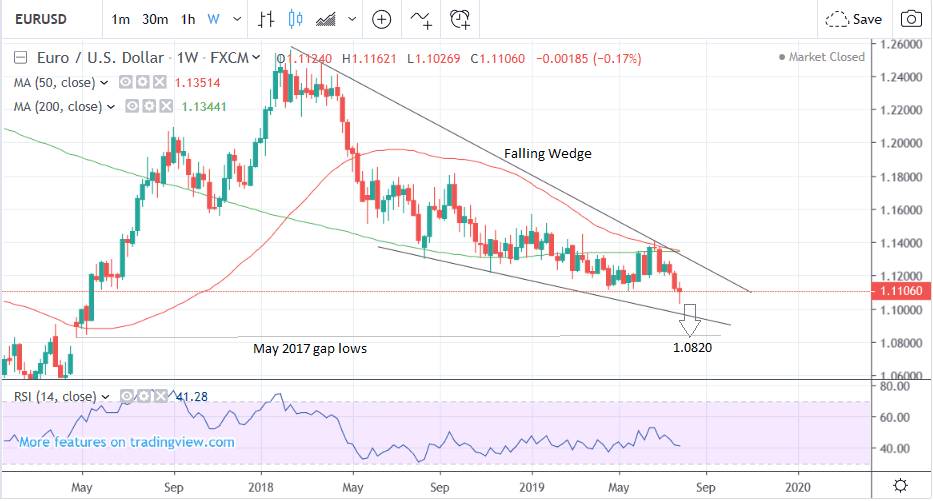 This is normally a bullish pattern but the breakout in June turned out to be false and the price has fallen back inside the wedge.

It now looks like the long-term downtrend is set to continue lower with the next target at the 1.0820 May 2017 market gap lows.

These lows are a significant support level since they sit at a previous market gap which formed when the market broke lower suddenly in May 2017. The edges of gaps possess especially strong support and resistance properties enhancing their potential as chart targets.

It may be a quiet week for the Euro from a hard-data perspective but the currency could still be moved by commentary as well as continued speculation as to whether the European Central Bank (ECB) stimulates the economy in September.

Recent growth data for Q2 showed GDP rising 0.2%, which although in line with estimates, was subdued historically-speaking. Inflation data has also been underwhelming.

Many analysts now believe the ECB will cut interest rates in September in order to stimulate the economy. Some also expect the ECB to begin QE.  Analysts at Wells Fargo expect a rate cut in September and QE of 45bn in October.

German industrial orders are the main hard data release. They are forecast to show a recovery of 0.5% in June compared to the -2.2% slump in May when data is released on Tuesday at 7.00. If better-than-expected they have the potential to check expectations of material easing from the ECB, although only marginally.

"Within the euro area the main focus will be on the industrial sector in light of its continued weakness. Figures for the month of June will be due from three of the largest member states (Germany, France and Spain) providing an up to date health check on the sector," says Ryan Djajasaputra, an analyst with Investec.

The main release for the U.S. Dollar is likely to be the ISM non-manufacturing survey with producer prices on Friday also possibly impacting as well.

A result above 50 signals continued expansion in the sector. The non-manufacturing ISM has held up better than the manufacturing ISM during the recent slowdown. It could be said to have offset the damage from manufacturing and analysts will we watching whether it can continue providing a ‘crutch’ or whether it too is destined for a deeper decline. 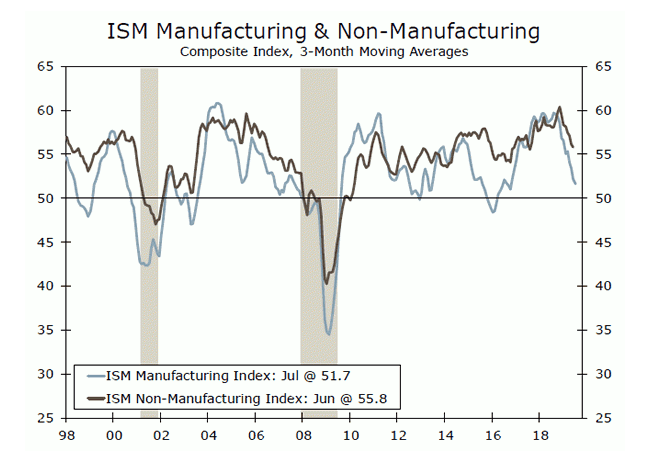 “From 2014-2016, a similar dynamic played out, as the U.S. economy as a whole slowed, but the slowdown was particularly concentrated in the manufacturing sector...Today, the non-manufacturing PMI sends a similar signal: economic growth is slowing, but the service sector likely remains strong enough to keep the overall economy afloat.”

Producer price inflation, also known as ‘factory gate' price inflation is forecast to rise by 0.2% in July from 0.1% previously when it is released at 15.00 on Friday.

A tame print could weigh on the Dollar since it may increase expectations of further interest rate cuts from the Federal Reserve (Fed).

The Fed cut rates by 0.25% in July as an ‘insurance policy’ against a downturn rather than the start of an easing cycle. If inflation pressures continue to fall, however, that might change and more cuts could be on their way.

It could be argued inflation starts at the factory gates from whence it fans out, so the readings can be a precursor of general inflation.

“Like other inflation measures, growth in the producer price index has slowed this year. On a year-over-year basis the PPI for final demand is up just 1.7%, the lowest reading since January 2017,” says Wells Fargo.” If PPI inflation were to slow further, it would likely reinforce markets’ views that this week’s rate cut by the Fed will not be a one-and-done move. Our forecast is for one more rate cut this year, and for inflation to eventually pick up around the end of the year.”