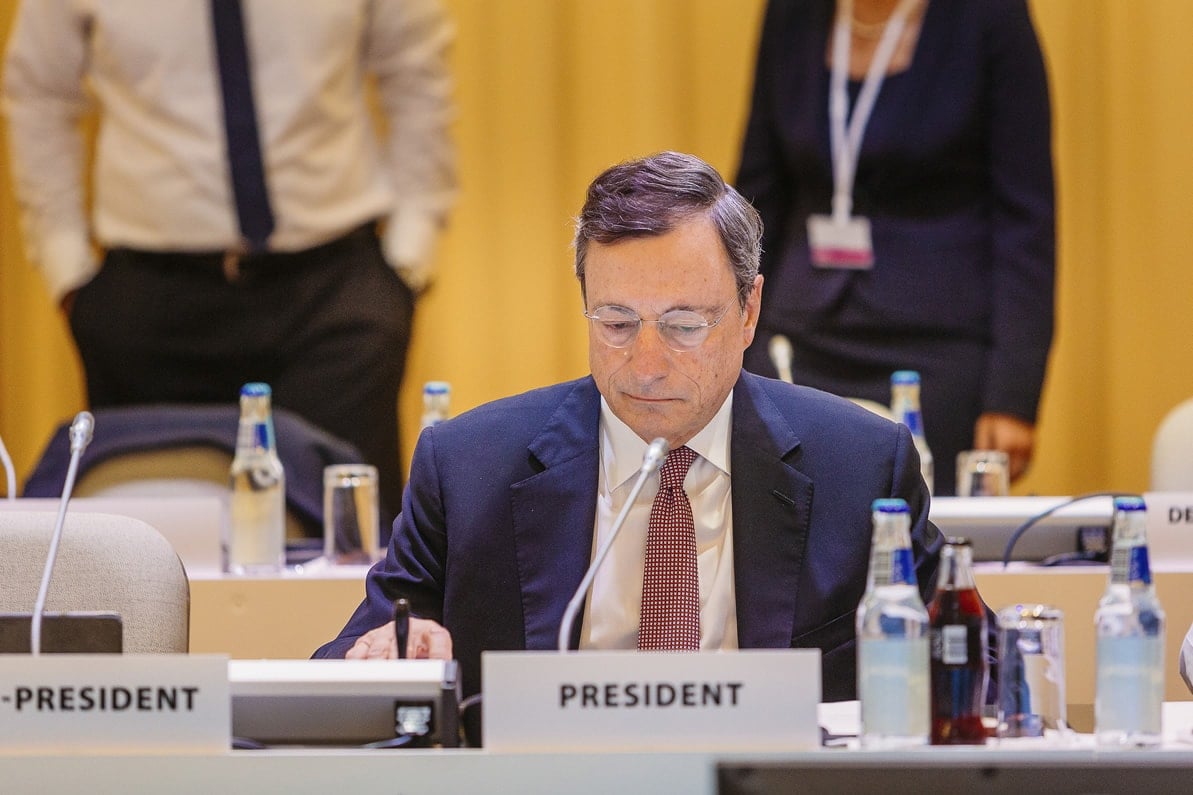 - Target labelled "too rigid" with ECB almost out of bullets.

- Any tweaks to target have significant EUR implications.

The Euro was on its back foot Thursday after Bloomberg News reported the European Central Bank (ECB) has come to view its inflation target as too "rigid" and that discussions about altering it are underway, which could ultimately see Eurozone interest rates move lower for even longer than previously thought.

ECB "staff" were said Thursday to be looking at updating the inflation target that dictates the central bank's interest rate policy after years of failed attempts to use monetary stimulus to get the consumer price index sustainably above the "close to, but below 2%" threshold.

The report follows repeated references to the "symetric" nature of the target by ECB officials in recent months and has prompted some analysts to contemplate whether the bank is about to formally declare the target such.

That could see the ECB keep rates low while inflation overshoots the target by as much and for as long as the consumer price index has undershot it. Barring a few brief periods resulting from increases in the price of oil, Eurozone inflation has been below 2% for much of the time since 2012.

"Central banks all over the world have been modifying their inflation targets and still failing to meet them, so the powers that be in Frankfurt have decided "we should attempt at failing too". We anticipate that the ECB will cut the deposit rate by 10bps in July and open the door to re-starting QE in the autumn," says Stephen Gallo, European head of FX strategy at BMO Capital Markets. 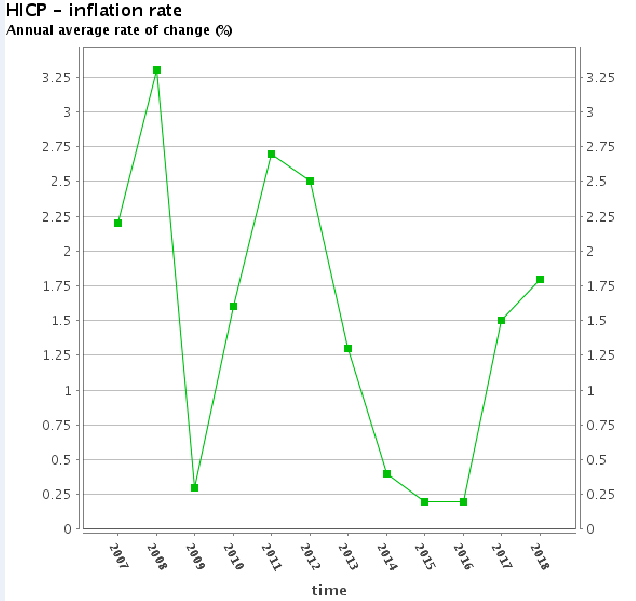 Any decision to move to a "symetric" target would mean interest rates move lower and remain lower than they are now for much longer than the markets anticipate. Pricing in the overnight-index-swap market indicates investors expect Eurozone rates to fall by 0.25% in the next year but return to curent levels in the first quarter of 2021.

Any decision to reduce the  target would risk necessitating growth-killing interest rate rises at a time when the economy is already slowing due to the impact of the U.S.-China trade war and a home-grown challenges. Meanwhile, an increase in the inflation target could necessitate a significant stimulus program even larger than the last one.

"The ECB is likely to extend forward guidance and pre-commit to further easing measures at their next meeting (July 25); their list of easing options including further cuts to negative deposit rates and reintroduction of asset purchases. Calls for buying corporate bonds as well unsecured bank debt, in addition to sovereign debt, have been growing louder in recent days," says Richard Franulovich, head of FX strategy at Westpac. 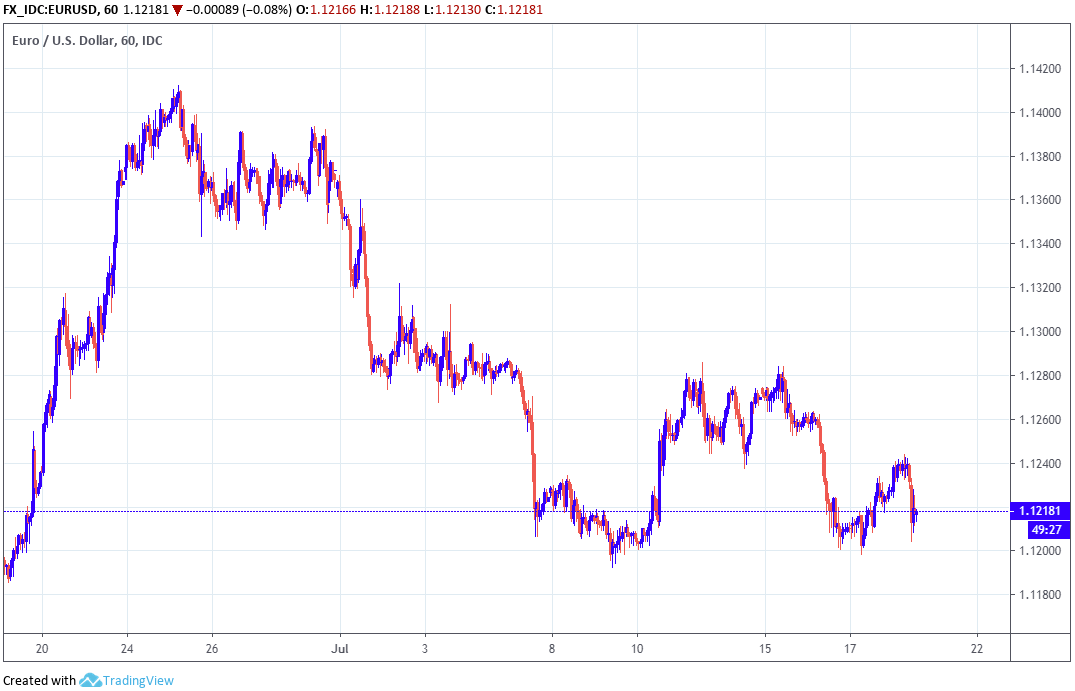 Thursday's report came at a time when speculation has been mounting that the ECB will cut its interest rate on Thursday, July 25 while some analysts are also forecasting the bank will restart the quantitative easing program that it ended in December 2018. Inflation was already well below the ECB target when the economy began to slow sharply in the second-half of 2018.

"Such a revamp of the inflation target is quite typical for the European policy sphere," says BMO's Gallo. "At the risk of being bold, we would argue that the "Lagarde imprint" on the central bank is already becoming visible. We would even go as far as arguing that Draghi and his successor are coordinating the next ECB policy response and the handover (once she is confirmed by MEPs) in the autumn. It's probably a done deal."

Eurozone inflation has fallen from 1.4% in January to 1.2% in July this year while the more important 'core' measure of inflation has remained at 1.1%. The main inflation rate is down from 1.8% in January 2018, although the core rate is up 0.1% from its 2018 level. All of these numbers are a long way off where the ECB needs them to be, even after its past efforts to stimulate the economy.

The ECB cut the rate it charges commercial banks to park money with it to -0.4%, reduced its lending rate to zero and spent up to €80 bn per month over the three years ending in December 2018 as part of an effort to lift inflation by stimulating economic growth. It bought European bonds en masse, forcing down their yields as well as borrowing costs for some companies.

"Ultimately, it takes a decisive range breakout between 1.1179 and 1.1362 to receive fresh directions, which is also reflected in the USD index, where we’d need a range breakout between 96.25 (minor 76.4 %) and 97.77 (int. 76.4 %) for directions," says Thomas Anthonj, a strategist at J.P. Morgan. "The failure to clear a minor c-wave projection of a classical a-b-c recovery at 1.1422 (c = a) in EUR/USD two weeks ago, increased the risk of having resumed the long-term downtrend significantly." 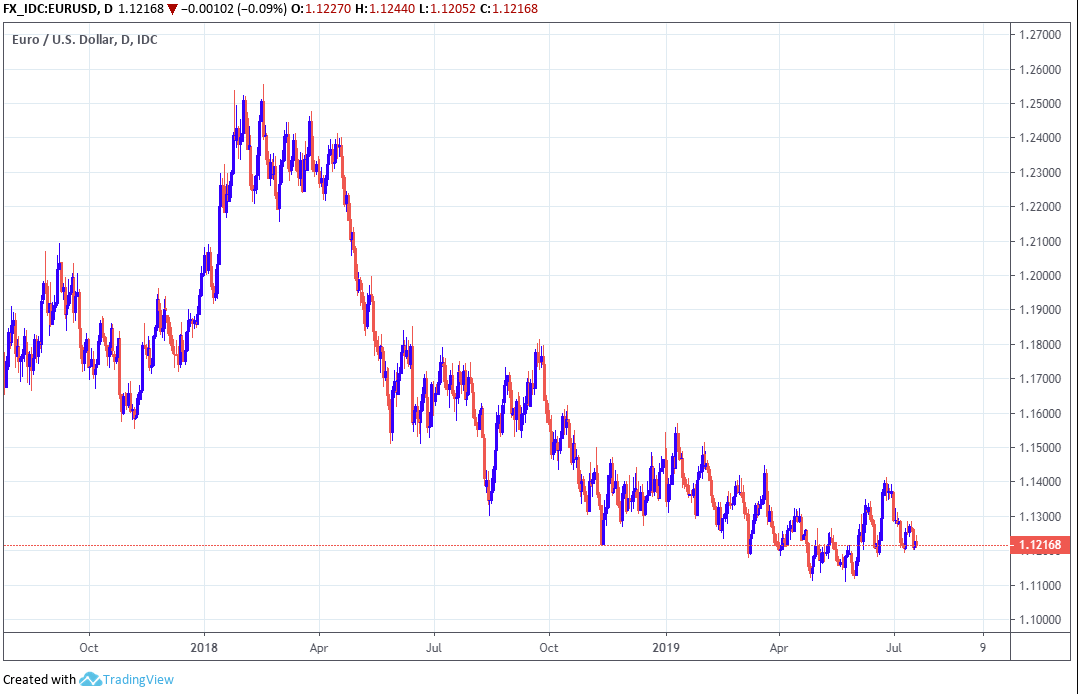 The market consensus is for a gentle increase by the Euro-to-Dollar rate into year-end as the U.S. Federal Reserve cuts its own interest rate more steeply than the ECB, but BMO's Gallo forecasts the exchange rate will fall to 1.09 over the next six months. Other analysts, particularly technical analysts who study momentum and trends on charts, say much of the outlook over the coming months will depend on whether the Euro manages to break from the up or downside of a narrow six-week range.

J.P. Morgan's Anthonj says the risk of a breakout to the downside of the recent trading range has increased after an "A-B-C" pattern failed to fully form on the charts. An "A-B-C" is a chart pattern that technical analysts believe indicates a change of trend is in the pipeline. One had been forming on the Euro-to-Dollar rate charts during the six-weeks of tight range-bound trading up to this week but the pattern was not fully-formed when it broke down.

"The dollar is much too strong. But that doesn't make it easy to be bearish of it, because of its 4 biggest trading partners two also have overvalued currencies (Canada and Mexico) and the other two (China and the Eurozone) only have slightly undervalued ones," says Kit Juckes, chief FX strategist at Societe Generale. "There isn't much of an FX trade there. EUR/USD is glued into its 1.11-1.14 range. I'd really quite like to go short Dollar/Mark but maybe I'll have to settle for being a gold bull for now."