- EUR forecasts cut at Commerzbank but only way is up.

- EUR still faces multiple headwinds but much is in the price.

The Euro saw its second consecutive session of gains the helped it to a three-month high Friday but it still has further to climb according to the latest forecasts from Commerzbank, which have been downgraded but still imply notable gains for the single currency before the year is out.

Europe's unified unit sprung back to life this week when the European Central Bank (ECB) came across less pessimistic than was expected in its latest interest rate meeting, although it extended gains Friday as the full extent of the headwinds likely facing the Dollar over the coming months became clear.

"For the euro the risk of the ECB cutting interest rates in a hurry is off the agenda. And as a result it becomes more attractive," says Ulrich Leuchtmann, head of FX strategy at Commerzbank. "Our view differs from the market’s."

However, markets were at that point betting the bank would cut its interest rates by around 10 basis points over the subsequent year and the ECB chief's guidance appeared to contradict market pricing.

"One could argue that 10bp more or less in interest rates are not going to have a major effect on the EUR valuation. And much more than that would be difficult to achieve," Leuchtmann says. "The rate step we are predicting is nonetheless likely to put pressure on the euro. First of all we expect it quite early on. The market only expects a rate cut with some certainty in the first half of 2020." 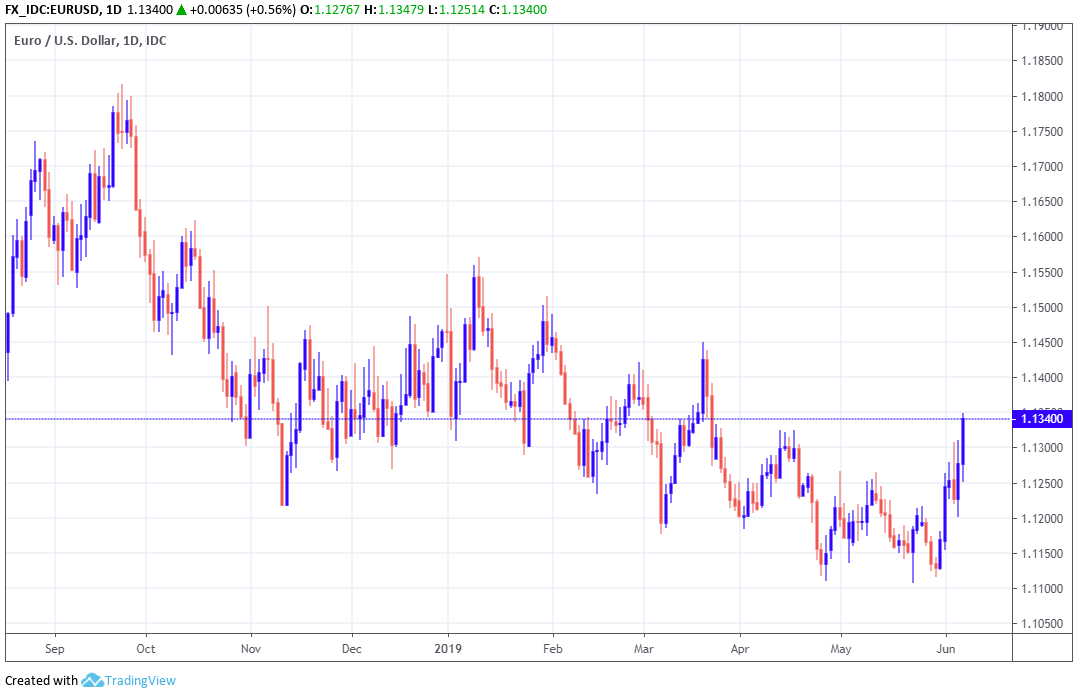 Leuchtmann is forecasting the ECB will actually go ahead and reduce borrowing costs for companies and consumers much sooner than the market gives it credit for, although what Commerzbank's top currency forecaster doesn't say quite so early on in his latest missive to clients is that this pressure will simply serve to constrain the upside seen by the Euro in the months ahead.

Changes in interest rates are only normally made in response to movements in inflation, but impact currencies because of the influence they have on capital flows and their allure for short-term speculators.

"We now expect an ECB rate cut for Q4 2019, combined with tiered deposit rates and a further extension of the forward guidance," Leuchtmann writes. "Everything all told the result of our latest round of forecasts means that we have more EURUSD negative factors to consider and have had to adjust our EUR-USD forecast to the downside– in particular until year-end 2019." 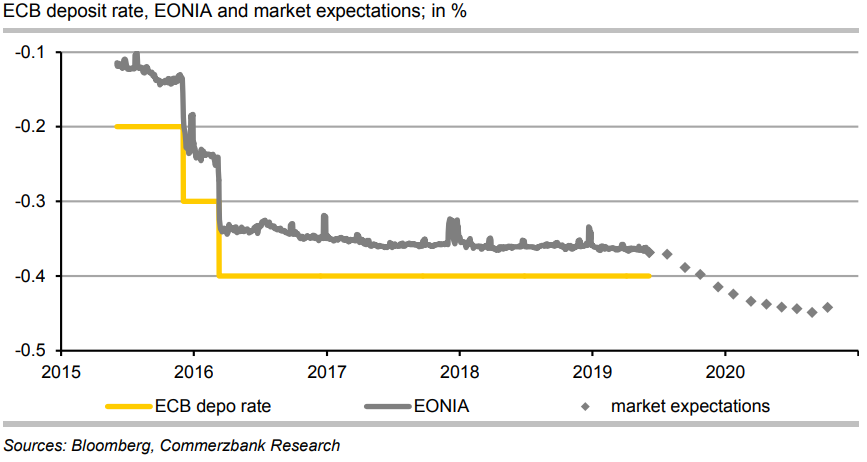 Above: European Central Bank interest rate and market expectations of it.

Since the last set of ECB and Commerzbank forecasts were made President Donald Trump has raised tariffs on imports from China and the trade fight between the world's two largest economies is now on the verge of becoming an all-out economic conflict.

The U.S.-China trade war damaged the Eurozone economy last year when it first began so markets have been anticipating a further decline in growth this year. Meanwhile, the UK has failed to leave the EU, it's Prime Minister has resigned and the perceived risk of a 'no deal' Brexit as well as general election are rising. And the European Commission is again at loggerheads with the Italian government over its budget plans, threatening legal action.

All of these things have the capacity to weigh on the single currency periodically during the months ahead, but much of the bad news is already in the current price and there will be other more important factors at work in the currency market this year as far as Commerzbank is concerned.

"Why do we remain optimistic for EUR-USD? The most convincing reason is the Fed’s monetary policy – and that will remain the case. Its about-turn is likely to make the high USD valuation seem increasingly questionable. And in this context it is not as decisive whether the Fed will cut its key rate one, two or three times. The fact that the greenback’s rate advantage will tend to diminish is likely to be the dominating factor for the EUR-USD," Leuchtmann writes. 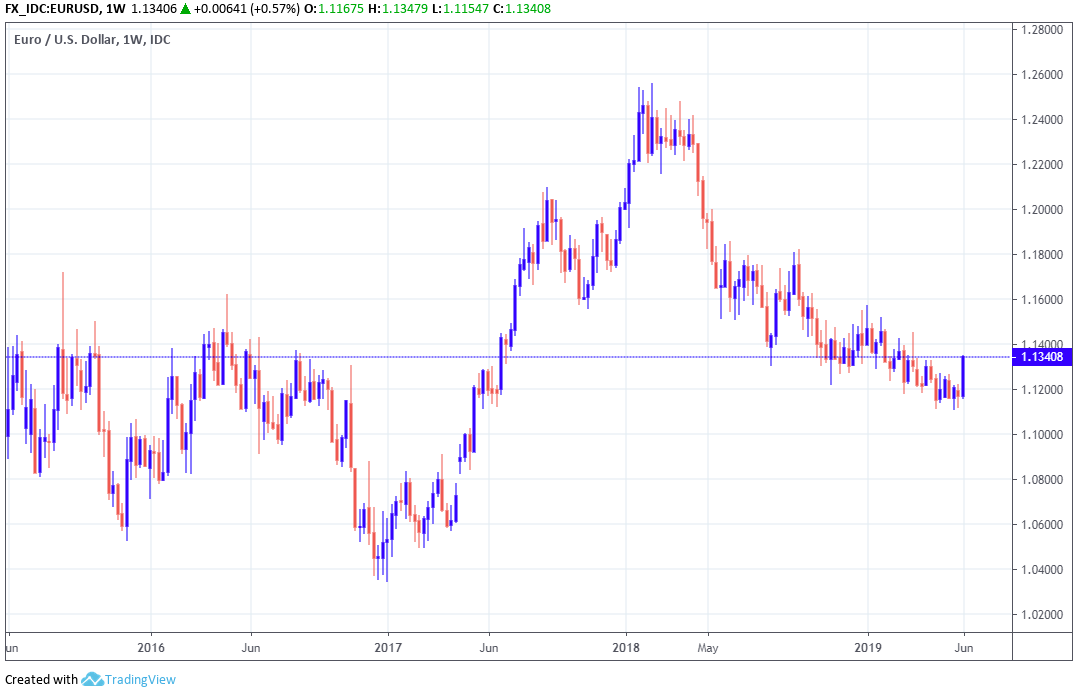 U.S. nonfarm payrolls for the month of May surprised radically on the downside Friday, aggravating what was by that point an already Dollar-opposed market. Investors have been betting incerasingly of late the Federal Reserve (Fed) will cut its interest rate multiple times, from post-crisis highs, in 2019.

This is because with the U.S. economy having been pumped up on tax cuts during 2018, it was always going to struggle to generate a better performance in 2019. Only President Donald Trump's trade war is escalating and at a time when the U.S. was already staring down the barrel of a modest economic slowdown.

Economists and analysts say it will not escape unscathed from the fight this year and again, much of the bad news around the Euro has already been baked into the Transatlantic exchange rate.

The market speculation that preludes those interest rate cuts from the current lofty 2.5% level is widely expected to bring a two-year rally in the Dollar index to an abrupt end, which can only be good for the Euro. The Dollar index is, to a tune of some 50%, comprised of trading in the Euro-to-Dollar rate.

"Over the course of summer, I can easily envisage EUR-USD rates above 1.14. The reason for a change of our end-September forecast is simply, that we have to account for the possibility of the ECB indicating its EUR-negative change of policy late in Q3/2019. In that case, EUR-USD could come under pressure late in Q3. To reflect this risk, we had to adjust our EUR-USD forecast for end-September," Leuchtmann says.