The Euro is facing multiple headwinds that have darkened its outlook, leading investors to shun the currency in their droves during recent weeks, but the weekend ahead is offering up a series of event risks that could easily weigh on the currency Monday.

There are three major fundamental factors that are likely to keep pressure on the Euro, say analysts at Citibank, the largest foreign exchange dealer in the world. These range from trade tensions between the U.S. and European Union and election risks to an ongoing economic slowdown.

The negative outlook has contributed to the EUR/USD pair breaking below the critical 1.1200 support level and hitting a 22-month low this week. Although mostly due to the impact of a strengthening U.S. Dollar, the Euro's headwinds have also been a factor and there are now key event risks looming over the currency this weekend.

These include the Spanish general election on Sunday, S&P’s credit rating decision for Italy on Friday after the market close and French President Macron’s Act II announcement of new tax and labour laws designed to appease yellow-vest protesters.

As far as the Spanish elections goes, the main risk to the Euro is that the Eurosceptic Vox party does better-than-expected and forms a far-right coalition that could further threaten EU plans for further integration of the various member nations, as well as possibly inflame tensions with Catalonia in a way that harms Spanish growth prospects.

The latest opinion polls show Vox on course to garner around 10% of the national vote, although the same polls also cast some 40% of voters as still undecided, according to The Guardian newspaper. 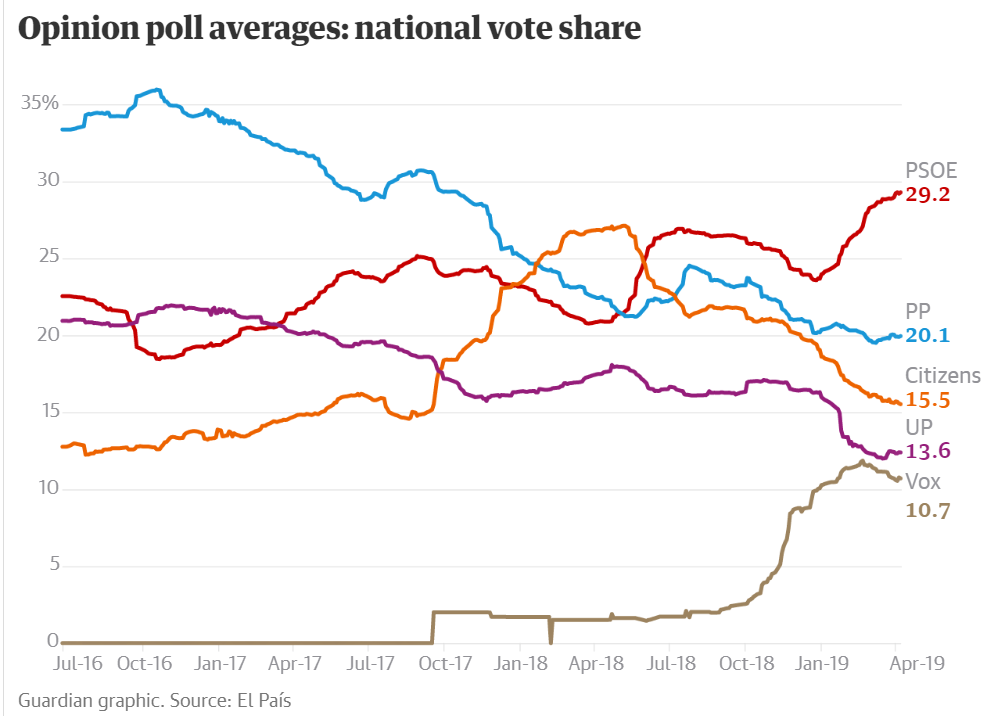 The S&P credit rating agency will also review Italy’s BBB (negative) rating Friday, with fears it could downgrade the country a notch given Moody’s decision to downgrade the country to Baa3 in October. Rating agencies are concerned about the Italian government’s plans for higher public spending, which they say will increase the country’s debt pile and, therefore, worsen its credit risk profile. Any downgrade might weigh on the Euro next week.

Beyond the weekend, markets will begin to focus on the looming EU parliament election and the threat of a trade war between the U.S. and EU. Trade-relations between the EU and the U.S. are on the rocks after the latter imposed tariffs on steel and aluminium imports last year, and the former retaliated with tariffs on Harley Davidson motorbikes and bourbon.

Talks between the two, which had begun positively, turned negative on Wednesday after President Trump tweeted the U.S. would be retaliating against the EU’s punitive tariffs on Harley Davidsons that were raised from 6% to 31% last year.

Harley Davidson says the higher tariffs have hurt its business and that it's now considering moving manufacturing abroad to avoid further losses. There is now a risk the U.S. will slap higher tariffs on EU cars, as has been threatened, which could cause a lot of damage to the Euro.

The auto trade accounts for 8% of total goods trade between the EU and US, according to the European Automobile Manufacturers Association (EAMA). The balance of trade is weighted in favour of the U.S. because Americans buy more cars from Europe that their European counterparts do.

“Today, the US is the fourth biggest exporter of cars to the European Union: 19% of the total value of US car exports heads for the EU, representing 12% of EU car imports by value,” says the EAMA. “The other way around, the United States is the number one destination for EU-built cars, accounting for 29% of the total EU export value and 25% of US global car imports by value,” the EAMA says.

Assuming the U.S. tariff fight with China ends soon, as most analysts say they will, the U.S. administration could increasingly turn its attention toward reducing the trade in goods deficit between the U.S. and Europe. This would hurt the Euro in the short-term, according to Anthony Gardner, a former U.S. ambassador.

The second major factor weighing on the Euro is apprehension over the outcome of the May 23 European parliamentary elections, with concerns that the elections could see more Eurosceptic parties and MEPs dispatched to Brussels. That could threaten the viability of the EU, and would complicate French President Emmanuel Macron's plans to accelerate the pace of 'European integration'.

The third headwind is “the continuing dour outlook for euro zone (in particular German) growth prospects,” says Citi. This follows a spate of negative data surprises, the latest of which was a surprise fall in the Ifo Institute for Economic Research survey index and weakness in the IHS Markit manufacturing PMI.