- But pair has reached November lows, could now bounce

- Euro to be driven by inflation data as Dollar eyes payrolls

The Euro-to-Dollar rate is set to begin trading Sunday around 1.1217 after falling more than half a percent in the previous week, although studies of the charts suggest the exchange rate is on course for further losses in the days ahead.

The Euro weakened last week after European Central Bank (ECB) president Mario Draghi hinted there might be an even longer wait than previously thought before the bank is able to lift its interest rates.

ECB policymakers said in March that rates will remain at their current record lows until at least 2020, although they had previously hoped to begin hiking in Autumn 2019.

Meanwhile, the Dollar rose due to mounting concerns about the outlook for global growth after more weak activity data emerged from the Eurozone and as talks to end the so-called trade war between the U.S. and China resumed. 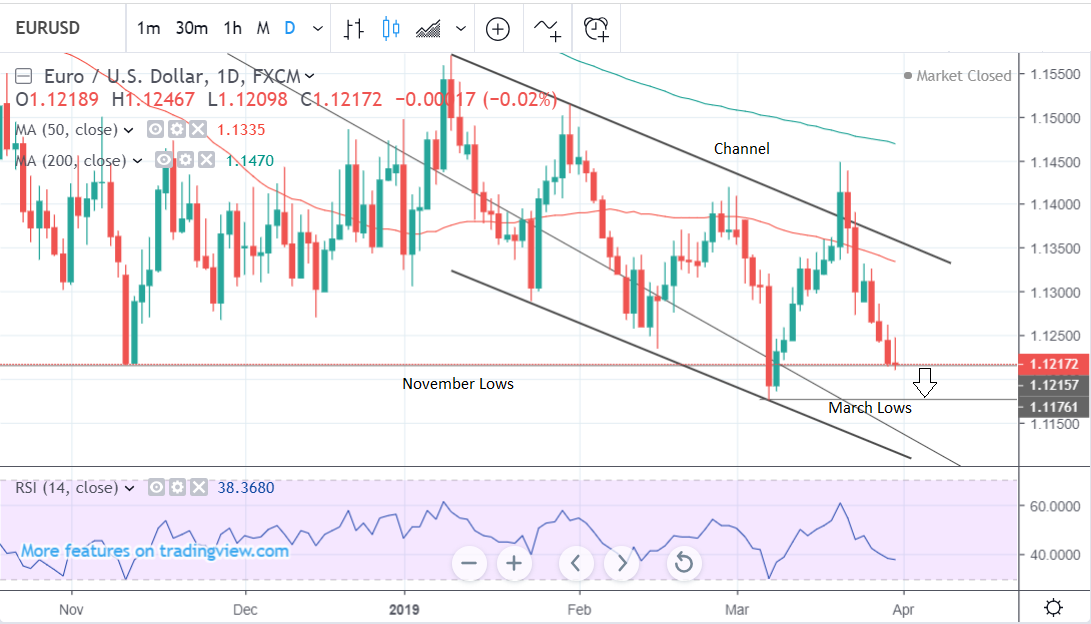 From a technical perspective, the outlook for the pair is slightly bearish as the exchange rate remains within a descending trend channel. However, the market has now returned to its November low where the downtrend could stall again.

The exchange rate may even bounce higher in the short-term but, overall, the broader trend is still bearish and so long as the market remains within the falling channel further losses are only a matter of time. The next target to the downside is the March lows at 1.1175. 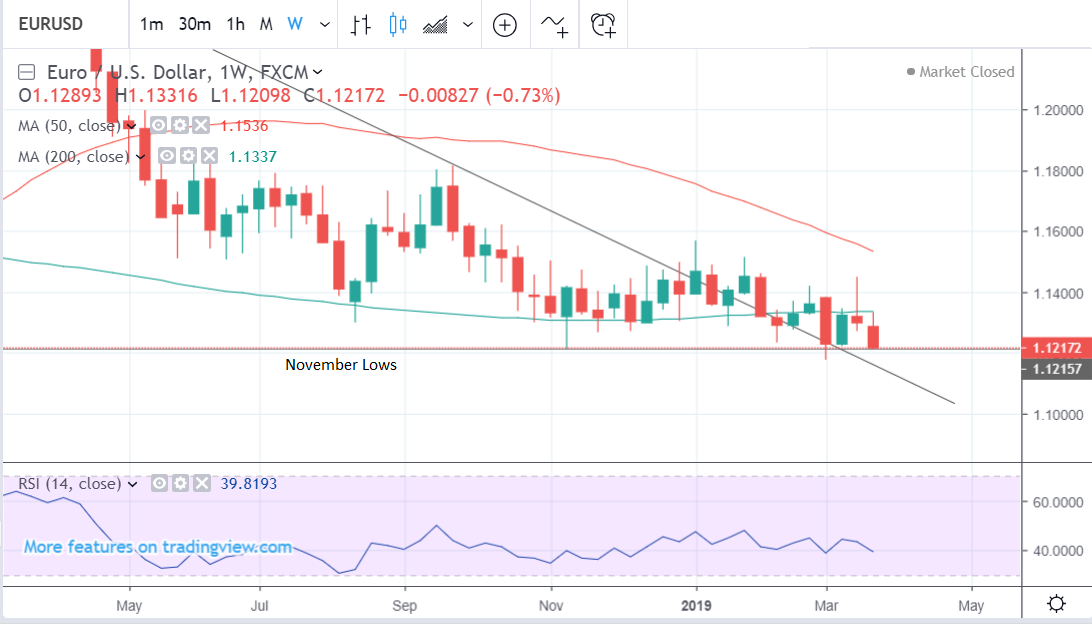 The bearish technical outlook is further reinforced on the weekly chart, where a ‘shooting star’ Japanese candlestick pattern has formed in recent weeks. The fact the shooting start was followed by another bearish candle suggests a continuation lower sooner or later.

The pair is also trading beneath its 200-week moving-average (MA), which is another bearish indicator.

The main release in the week ahead for the Euro is inflation data, out at 10:00 am on Monday. Consensus is for inflation of 1.5% in March, unchanged from in February. Core Inflation, which leaves out volatile fuel, food alcohol, and tobacco components, is expected to slip to 0.9% from 1.0% in February.

Inflation is important for the Euro because it informs central bank policy on interest rates and this influences the currency.

Mario Draghi, the president of the European Central Bank, said in a speech last week he expects the ECB to keep interest rates low for some time yet because inflation is already too low and now the economy is slowing. Inflation is a function of demand so when the economy slows, price pressures tend to weaken.

The release of the minutes of the March ECB policy meeting, out at 12.30 GMT, on Thursday, will be another key moment in the week ahead. This will reveal the deliberations of the governing council during the last meeting and could be useful as a gauge of what they may do next.

The risk is that growth concerns become so acute that they pivot policy towards increasing accommodation and completely write off raising interest rates for the time being.

The unemployment rate has been one of the bright spots of Eurozone data and it is expected to show a 7.8% rise in the week before - the same as the previous result. There is a risk it could be better-than-expected which would support the Euro.

Retail sales data for February is out on Wednesday and is expected to show a 0.2% rise compared to 1.3% previously on a month-on-month basis and a 2.0% from 2.2% rise on a year-on-year basis.

Retail sales is a major contributor to overall GDP so if the data is better-than-forecast it could support the Euro and vice versa if it is worse.

The main release for the Dollar in the week ahead is the March nonfarm payrolls report, due out at 13:30 London time on Friday. Markets will scrutinise this report closely given the shockingly low 20k result last month which massively undershot the consensus for 180k new jobs to have been added that month.

Consensus is for 175k new jobs to have been added in March and for the unemployment rate to remain steady at 3.8%.If March’s figure undershoots expectations in a similar manner to last month then investors, economists and markets would likely fear for the health of the U.S. as well as global economies.

However, and almost perversely, the Dollar may not necessarily be weakened by such an outcome because of its safe-haven status and given the message such a result would send about the global economic outlook.

Wage data will also be watched closely because of the impact rising pay packets can have on inflation. In addition, with some economists growing concerned about the impact Federal Reserve interest rate rises may be having on households, wage growth is an increasingly important pillar of support for the economy.

Average hourly earnings are expected to have risen by 0.2% in March, down from 0.4% previously, and at an annualised pace of 3.4%.

Retail sales figures for February will also be released this week, on Monday, and markets are looking for growth of 0.3% in the headline number. Core retail sales, which exclude car sales from the numbers, are seen rising by 0.4%.This a key input into GDP so will help economists firm up estimates of first-quarter growth.

Another key gauge of U.S. economic health is the ISM manufacturing PMI. This index is forecast to pick up to 54.5, from 54.2 previously.