- EUR/USD to remain in range despite worse outlook

- TLTRO to be extended and rate rise put on hold

The Euro will stay surprisingly strong despite the deceleration in Euro-area growth and the risk of a U-turn by the European Central Bank from their plans to normalise crisis-era policy settings, according to Citibank.

Analysts at the world's largest foreign exchange dealer say the single currency will defy expectations for a decline, particularly against the U.S. Dollar, with the EUR/USD pair potentially rising towards range highs in the 1.15s.

Dollar weakness is expected to outweigh the Euro's challenges with the region’s ample current account surplus providing a fundamental underpinning to the single-currency.

Citi’s stance remains positive despite the recent Euro-negative news flow. Of late we have seen a substantial fall in the Eurozone Manufacturing PMI into contraction territory below 50 (49.2 in Feb), and the comment from ECB governing council member Benoît Cœuré that the economic slowdown is “clearly stronger and broader” than the ECB expected.

Yet, the Euro has kept above its former lows regardless of these headwinds.

“Despite the negativity in the Eurozone, an attempt to convincingly break lower in EURUSD fails and the pair still remained within the range starting from Oct 2018, which may imply EUR may have gradually reflected the negativity,” says Citi in a weekly FX strategy note. “Eurozone current account surpluses, Chinese easing, and fading US growth outperformance may underpin EUR in the medium and long term.”

The bad news includes an expected reluctant acknowledgment by the ECB at its March meeting next week that growth will likely slow to 1.3% in 2019 from the 1.9% previously forecast, according to sources inside the ECB. This is in line with European Commission forecasts published in December.

Sources also reported the ECB is planning an extension of its current easing initiatives to help prop up the slowing economy. These include an extension of TLTRO’s (targeted long-term refinancing operations) in April, which provide cheap refinancing to European credit institutions.

“Another Euro system official tells MNI (news) that fresh TLTROs are likely to be announced in March, though it could just be a broad policy decision with details likely coming later in April or beyond (ECB’s Nowotny has indicated the ECB could wait until summer when it gets a better read on the eurozone economic outlook),” says Citibank.

It is also now probable the ECB will delay the implementation of the first hike in interest rates. It is also expected to remove the text from the ECB statement about interest rates remaining unchanged only “through the summer of 2019" and replacing it with their old phrase “remain unchanged for as long as necessary”, according to Citi.

Previously the single currency had been supported by expectations the ECB would start to raise interest rates by the end of the summer and by the fact that it had already ended its quantitative easing (QE) programme in 2018.

The new slower growth projection, however, means it is now still too early to consider raising interest rates, which will put extra pressure on mortgage holders, and other debtors.

The upshot for the Euro is that it might actually remain quite strong versus the Dollar which is expected to see losses due to fading economic outperformance and concerns about the U.S. debt burden and twin deficits. 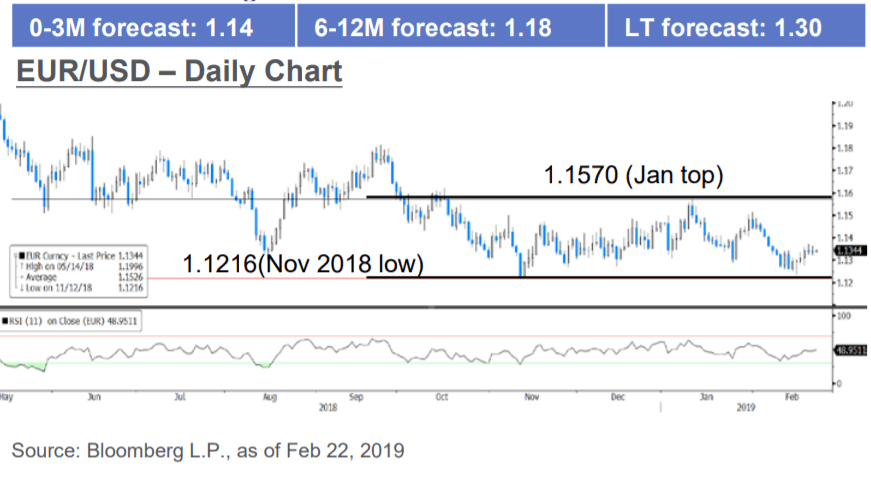