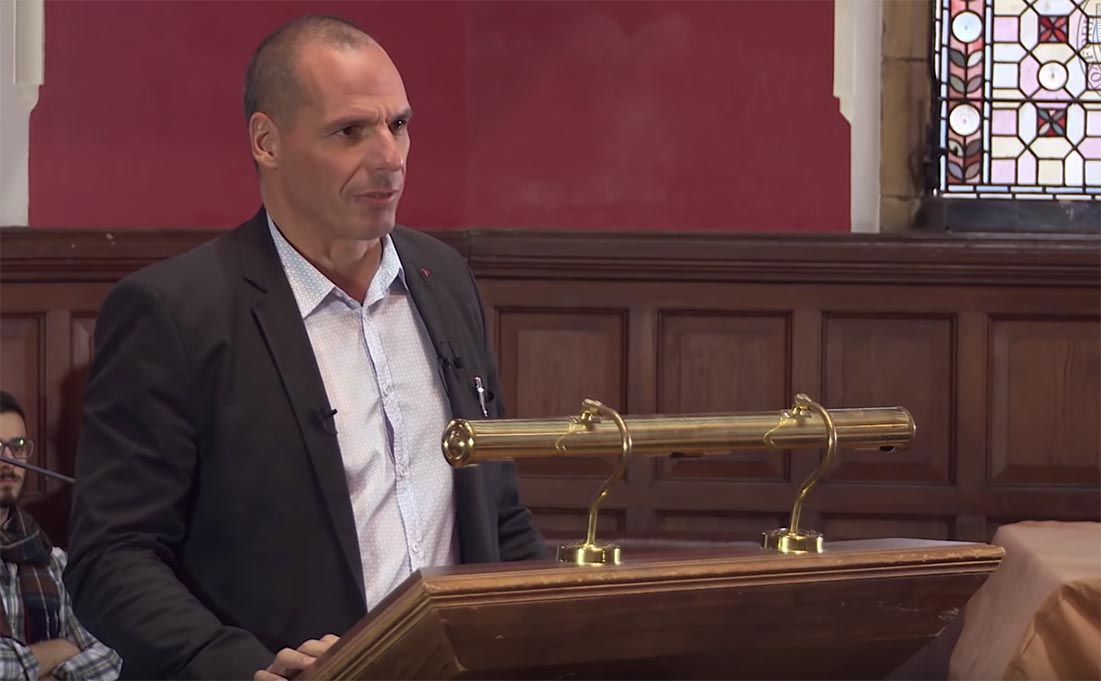 - The Euro will end when Germany decides

- Risk of fragmentation as nationalism on the rise

If the Euro ever meets its end, it will probably be swiftly, and at the behest of Germany, says Yanis Varoufakis, the economist and former finance minister of Greece who explains the Euro effecitvely facilities the draining of money out of 'periphery' Europe and into safe-haven German banks as a guard against a potential redenomination.

But, it also suggests the bar to the currency's demise is set very high, which should allow investors to discount the perennial chatter of its impending decline.

The Euro was an ill-conceived, badly-designed, financial instrument that has made European’s poorer overall, argues Varoufakis in a speech delivered at the Oxford Union.

The single-currency has exacerbated the effects of the financial crisis, and resulted in the rise of the far-right, says Varoufakis who took over as Greece's finance minister at the peak of that country's financial crisis when 'Grexit' was the buzzword on financial markets.

The knock-on social effects brought about by the Euro ultimately imperil the future of democracy and civilisation, says Varoufakis.

Yet despite these shortcomings, the currency remains relatively well-valued by many investors - what could explain this apparent paradox? The answer lies in how investors have tactically positioned or might position, in the event of its demise.

“Why do the money markets value the Euro so highly compared to the Pound, the American Dollar etc?” questions Varoufakis. “Suppose you are a Singaporean, Chinese, American or even a German investor, and for some reason, you agree with me that the fragmentation of the Eurozone is at an advanced stage, and the Euro has never been weaker or more problematic. Should you sell your Euros? No, let me share a secret with you, you should shift your Euros to a German bank account.”

If the Eurozone breaks up and all the countries revert to their pre-Euro currencies, Euro’s held in German bank accounts will be redenominated into Deutschmarks which will be stronger than any other European currencies because of Germany’s huge current account surplus.

“So if you happen to have Euros in 'Deutsche Bank' in Frankfurt they are going to appreciate and you will get a magnificent windfall. So, can you see how the paradox dissolves?” Says Varoufakis.

If there is going to be an end to the Euro it will probably be triggered by Germany.

“We will leave the Euro when the German political class has had enough of the riff-raff,” says Varoufakis. “The moment they start sniffing in the wind that they have to bail out 2.7 trillion Euros of Italian debt. Believe you me, the Bundesbank already has plans in the draw for printing Deutschmarks.”

The process has already begun: in the last 2 months 200bn Euros has already been shifted from Italian to German accounts because of the risk of investors being left with redenominated (and weaker) Lira.”

The main problem with the Eurozone is that it is a monetary union not backed by a fiscal union. This meant the European Central Bank (ECB) could not react as quickly and efficiently to the 2008/09 financial crisis as central banks in the US, Japan, and the UK, which printed money immediately to liquify the system.

In the Eurozone, where it was illegal initially for the central bank to monetise debt, the job of bailing out bad banks was left to governments who had to use taxpayers money. This resulted in harsher austerity and a slower recovery out of the crisis. It also caused deep-seated resentment and the long years of want bred a class of disenfranchised, angry underclass who have now turned to nationalism as their salvation, according to Varoufakis.

The architects of the Euro may have planned the current crisis as a growing pain in the development of a united Europe, says Varoufakis, who claims President Mitterand of France himself foresaw the deficiencies of the Euro would lead to a ‘crisis’ from which the only solution would be full integration.

Varoufakis quotes a source as telling him that Mitterand once said in private that the Euro was a necessary evil on the path to federalisation.

Mitterrand was quoted as saying: “I do not have the authority to bring about a Federation but I can bring about, with Helmut (Kohl, the German Chancellor), a monetary union, that is going to create a massive crisis and then the people who will succeed us will have no alternative than to create a Federation.”

The solution to the many issues and problems posed by the Euro is either for deeper integration into a Federal-style Europe with a central treasury or the removal of the Euro altogether. The former would have many opponents and appears politically untenable - the latter costly.

Pound to Canadian Dollar Week Ahead Forecast: Could Test 1.72 if BoC Jilts Inter…

Pound to New Zealand Dollar Week Ahead Forecast: Downtrend to Continue on Break …