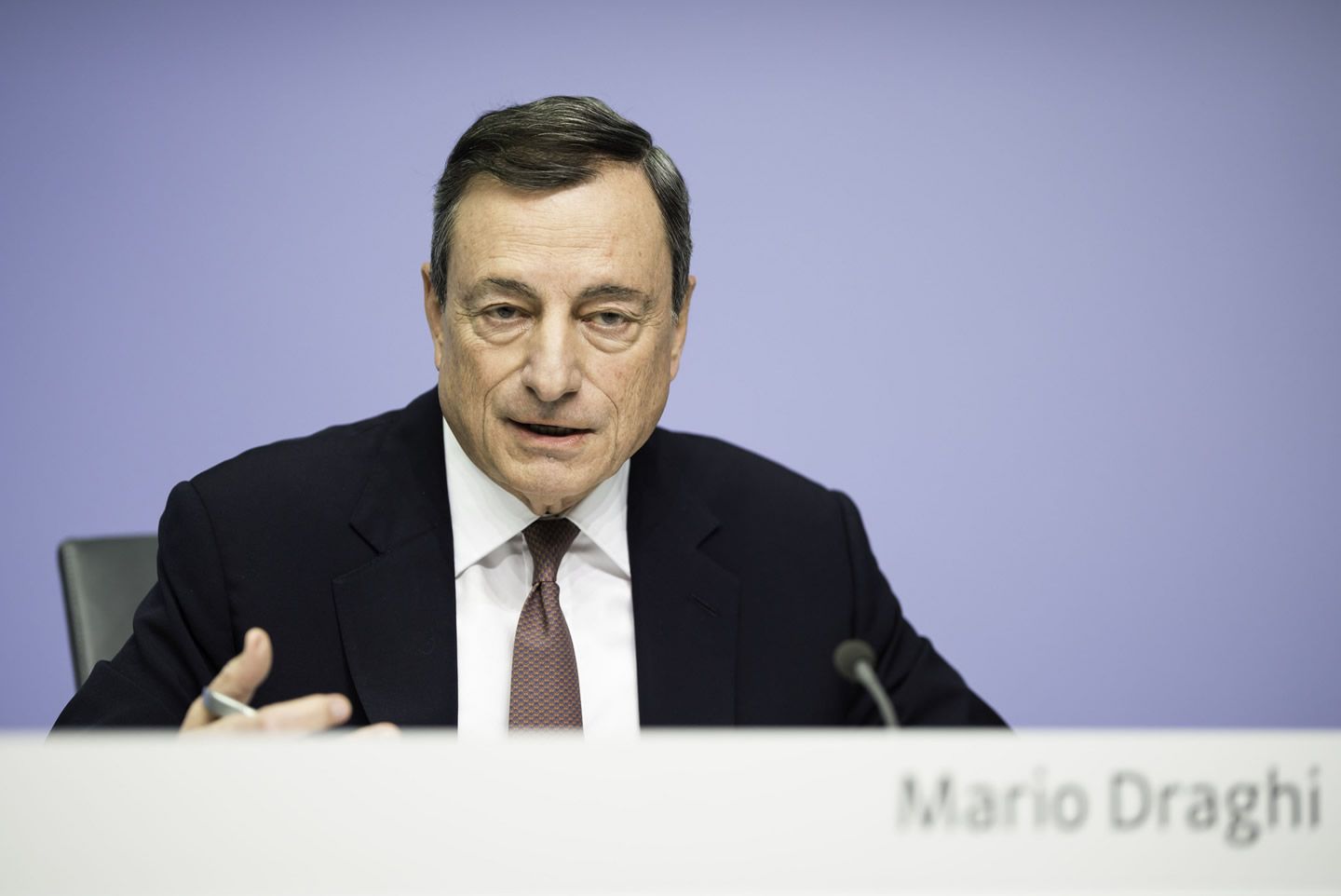 The Pound whipsawed against the Euro Thursday following the latest European Central Bank monetary policy statement, as traders responded to perceived hints and clues about likely changes to Eurozone monetary policy during the year ahead.

ECB chief Mario Draghi sounded an optimistic tone on the outlook for Euro area economic growth and inflation, suggesting the bank thinks it is on course to meet market expectations for an interest rate rise toward the end of 2019.

Mario Draghi told reporters the Governing Council is confident that Euro area inflation will converge with the ECB target of "close to but below 2%" even after a likely end to its quantitative easing programme at the end of 2018. Eurozone inflation data has underwhelmed markets of late. While the headline inflation number has risen back to the ECB's 2% target, the more important measure of core inflation fell from 1% to 0.9% in July.

This optimism is positive for the Euro because inflation must first make a sustainable return to the target if the ECB is to be able to raise its interest rate. Changes in interest rates, or hints of them being in the cards, are only normally made in response to movements in inflation but impact currencies because of the push and pull influence they have on international capital flows and their allure for short-term speculators.

However, markets were looking for clarity on rumours the ECB will soon tweak the framework under which it reinvests some of the proceeds from its quantitative easing programme, in a way that might utlimately mean the Euro does not benefit from the anticipated end of ECB bond purchases later this year.

Draghi denied that any "reinvestment" conversations had taken place, which may explain the volatility in exchange rates during the meeting. The ECB has been buying tens of billions of Eurozone bonds each month since early 2015, in an effort to stimulate the economy and spur inflation by forcing down market borrowing costs.

"All else equal, Draghi's upbeat message on the region's macro outlook offers a modest tailwind of support for EUR. We do not want to take this too far, however," says Jacqui Douglas, Chief European Macro Strategist with TD Securities. Douglas believes the single currency will likely remain anchored to recent ranges.

"With the ECB on autopilot for the next several months, we do not think the EUR leg will drive a breakout unless the European political backdrop deteriorates rapidly in the weeks ahead," says Douglas.

It goes almost without saying the European Central Bank held its main refinancing rate, marginal lending rate and deposit rate at 0%, 0.25% and -0.4% respectively on Thursday. No changes to its quantitative easing programme were announced either, given an end of the ECB's intervention in European bond markets was unveiled back in June.

"Since the Bank had already announced last month that it would end its net new asset purchases this December and keep interest rates on hold through the summer of 2019, this meeting was always likely to be a bit of a non-event," says Jennifer McKeown, chief European economist at Capital Economics. "The ceasefire agreed by President Trump and Mr Juncker yesterday has arguably reduced the threat from trade tariffs, which was the key downside risk that the ECB highlighted last month."

Mario Draghi welcomed the "trade war" agreement between the US and EU but did not make further comment.

The ECB said in June it will continue buying €30 billion of European government bonds each month until the end of September 2018, at which point the rate of monthly purchases will be cut to €15 billion before being reduced to zero at the end of December. This should have been a positive development for the Euro.

However, the Euro was left badly damaged in the wake of the meeting because the ECB told markets interest rates would "remain at their present levels at least through the summer of 2019", given markets had hoped the central bank would be in a position to normalise its interest rates around June 2019.

Since then, pricing in initerest rate derivatives markets, which enable investors to protect themselves against changes in interest rates while providing insight into monetary policy, has turned more "dovish" in that markets now expect only a 0.10% interest rate rise in 2019. This is now seen coming closer toward the end of the year than the middle.

"While market expectations have shifted too much towards the dovish side of things for our liking – with only 10bps worth of ECB deposit rate hikes priced in by end-2019 versus our house view of 40bps – we doubt President Draghi today will be the catalyst for short-term EZ rates to move higher," says Viraj Patel, an FX strategist at ING Group. "Equally, however, the bearish adjustment in EUR positioning in recent months – with leveraged funds now the most bearish they’ve been on EUR/USD since the French presidential elections in May 2017 – means that there’s probably limited scope for a dovish Draghi to weigh on the Euro."

June's decision to cease new bond purchases is contingent on the inflation picture evolving in line with the central bank's forecasts, which were upgraded on at the meeting. It, and other future policy decisions, are also hinged on Europe, the US and world more generally avoiding a so called trade war.

Eurozone growth forecasts were also revised, with the bloc's economy now projected to grow by 2.1% in real terms for 2018, down from the 2.4% forecast issued back in March. Projections for growth in 2018 and 2019 were held steady at 1.9% and 1.7% respectively.

Most importantly, all of these forecasts are hinged on the European Union avoiding a so called trade war with the United States, as well as the broader global economy not being pulled into a conflict where the weapons and bullets come in the form of protectionist trade policy measures and tariffs.

The White House is pursuing restrictive legislation to govern Chinese investments into the United States and recently ordered a range of tariffs be levied against imports of more than $250 billion in imports of Chinese goods. Trump has also placed tariffs on imports of steel and aluminium from China, Canada, Mexico and the European Union in an effort to reduce the US trade deficit.

The EU has since responded with its own levies on US motorcycles, jeans and whiskey, drawing threats of even more tariffs from the White House, this time targeting the mighty European automotive sector. Fears are that a tit-for-tat tariff fight between the world's largest economies will quickly descend into an all out "trade war" and that this will dent economic growth in all countries it touches.

However, a Wednesday meeting between President Trump and European Commission chief Jean-Claude Juncker yielded a joint commitment to avoid imposing further tariffs on eachother and to begin talks about eliminating both existing tariffs as well as non-tariff barriers. The recent metals tariffs will also be reexamined and both parties will work toward reform of the World Trade Organization.

"While the EU pledged to import more soybeans and liquefied natural gas from the US, the US will re-assess the tariffs it has already imposed on steel and aluminium imports from the EU. The EU would then lift its retaliatory measures," says Holger Schmieding, chief economist at Berenberg Bank. "Trump is not exactly known for consistency. The upcoming negotiations could still founder. A serious risk of a disruptive trade war between the US and the EU, which both account for almost a quarter of global GDP each, thus remains. However, the trade war threat (20% probability) now looms less large for the time being."