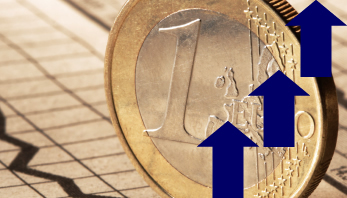 The pound to euro exchange rate (GBP/EUR) is trading tentatively higher on Tuesday morning however there are further indications that suggest that the recent GBP rally has run out of steam.

(NB: Our GBP/EUR quotes are taken from the spot markets; your bank will subtract a discretionary spread when passing on their retail rate. However, an independent FX provider will guarantee to undercut your bank's offer and deliver you up to 5% more currency. Please learn more here.)

Yesterday's session played out in the EUR's favour. The lack of direction and data in the market helped to slow the pound's momentum and allow the euro to bully the currency to lower figures. The root of this move of course lies with Friday's poor IP data which proved to be the excuse for the significant pullback we have witnessed.

This morning has brought the UK CPI figure which showed a slightly worse than expected number of 2.0% rather than 2.1%. The Bank of England's inflation target has therfore been met for the first time since late 2009.

"With little else to support the pound until BoE Gov Carney's speech tomorrow, risks remain to the downside," warns Sasha Nugent at Caxton FX in a morning exchange rate outlook note.

Commenting on the near-term outlook for the euro pound exchange rate (EUR/GBP) UBS say, "the latest sharp recovery indicates scope for extension to test resistance at 0.8377, a break above which would open 0.8424. Support is at 0.8290 ahead of 0.8231."

Meanwhile over ICN Financial there is currently a mildly positive stance being adopted towards the euro:

"The pair confirmed the breach of the minor Rising Wedge to support our intraday bullish outlook, targeting initially 0.8400. The latter is a strong resistance and we should observe the pair closely when reaching target, as it represents another Rising Wedge resistance at a higher timeframe, and accordingly a breach of which will extend gains toward 0.8570 over the short term. The bullish move over intraday basis is favor as far as the pair is stable above 0.8290."

"The UK opened lower today, on a day when UK CPI and RPI come out as well as US retail sales.  This on the back of online retailer ASOS posting as 38% increase in 4 months retail sales, above expectations, and giving a picture of retail trends in a market where it is key that retailers meet their projected earnings targets but consumers are increasingly looking for greater value, convince and choose to shop online," says Farhan Ahmad, a dealer at Tradenext.

The British Retail Consortium (BRC) reported that the sales of online non-food items rose by 19% in December.

This could prove to be a double edged sword.  Although the large retailers with online services and the increasingly popular “click and collect” option may benefit from increased sales; it means the high street (the back bone of UK retails) may feel the pinch.

"The BRC reported that high streets saw a 3.7% fall in footfall, while visitors to large shopping malls were down 1.8%.  With similar falls in numbers in October and November it makes a whole quarter of falling victor numbers and possibly revenues," says Ahmad.