- Italy heads back to the polls, and anti-EU parties could grow their lead

- Euro showing the strain of current uncertainties, falling against all major currencies

Financial markets are reflecting signs of stress pertaining to Italian political uncertainty; a development that has allowed the British Pound to notch up some gains on the the single currency.

Italy appears to be headed back to the polls, and there is a good chance that the two leading anti-establishment parties that won the last vote could increase their vote share in the rerun.

The prospect of both Liga and the Five Star Movement increasing their mandate when polls are eventually held appears to have triggered weakness in the Euro, which is now seen to be the worst-performing major currency on a rolling monthly basis thanks to a combination of Italian uncertainty and a run of under-par economic data releases. 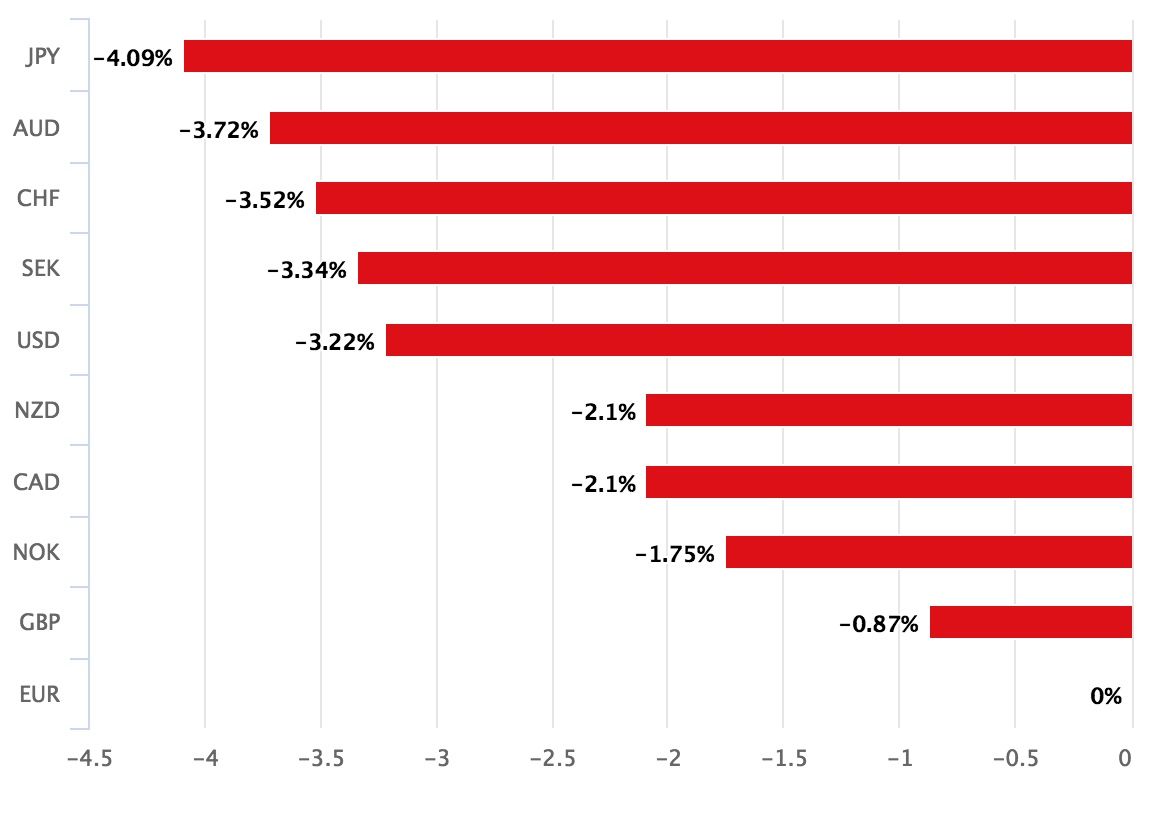 Above: Over the course of the past trading month, the Euro is the worst performing major currency.

"Big worries in the market – EUR was the worst-performing currency and the safe-haven JPY and CHF were the best," says analyst Marshall Gittler with ACLS Global. "That combination obviously speaks to worries about Italy, where the 5 Star Movement and League began mobilising for an early election."

If we look at financial markets, signs of stress pertaining to Italy are evident as the cost of borrowing rises sharply in relation to Eurozone anchor Germany, and the cost of insuring Italian debt against default jumps: 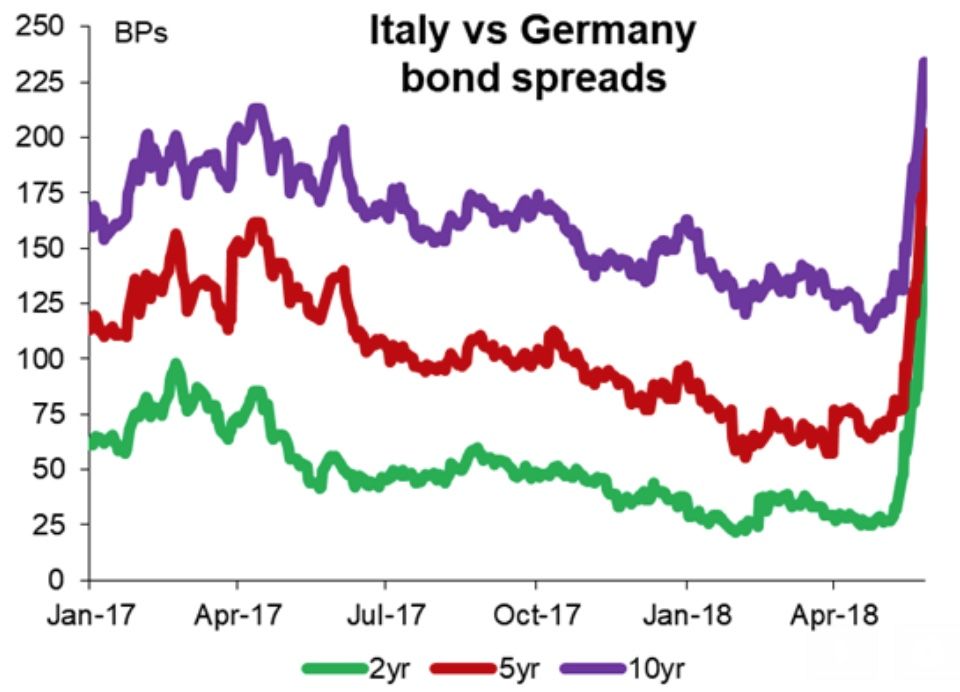 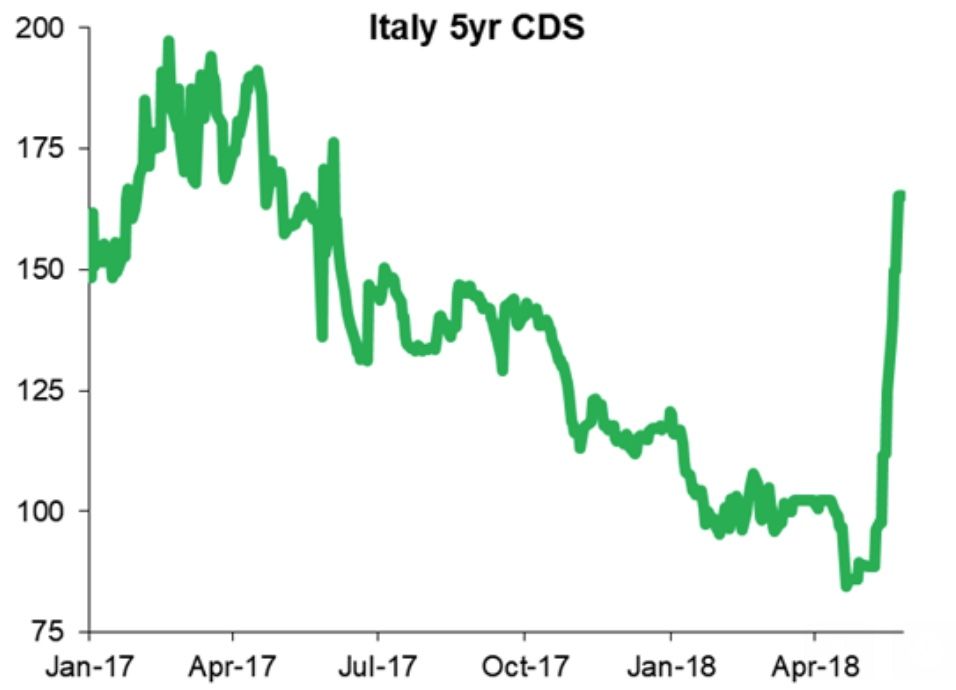 "During the course of yesterday the realisation struck that the failure to form a government in Italy does not constitute a EUR positive event after all," says Ulrich Leuchtmann, an analyst with Commerzbank. "The Euro remains a political experiment and can fail politically if the expected economic advantages (fair growth and wealth) are not achieved."

There were suggestions that the failure of the two Eurosceptic parties to form a government could potentially open the door to a return to more moderate, centrist politics in the Eurozone's third largest economy.

However, markets have instead begun to calculate the turn of events could merely entrench anti-EU views amongst the Italian electorate and open the door for a more robust policy agenda from the two leading parties.

The Pound-to-Euro exchange rate rose at the start of the new week and looks intent on climbing with one Pound now buying 1.1458 Euros and it appears the current month's low at 1.1270 is truly in the rear-view mirror. One Euro buys 0.8727 Pounds.

It appears that the uncertainty surrounding Italian politics has evolved in such a way that markets can no longer turn their shoulder and march onwards.

2-year BTP yield chart screaming "I'm an Italian bond investor... get me out of here!"
Spilling into #FX markets more meaningfully now with $EUR leading currencies lower. $USDJPY looks set to test May lows. Would be serious if we get below 108.50 pic.twitter.com/uKSHcji0W2

The only two parties that could have formed a coalition government - Liga and Five Star - have dropped their bid to form a government following the decision by Italian president Sergio Mattarella to block the nomination of Eurosceptic finance minister Paolo Savona.

Mattarella has since given Carlo Cottarelli, the former International Monetary Fund official, the mandate to form a transitional government to oversee the running of the country until new elections are held.

Analysts are warning - and markets appear to agree - the move by Mattarella could backfire as Five Star and the Lega could be emboldened by an apparent attempt by the establishment to shut them out.

"Italian political risk is delayed rather than resolved," says a note from research analysts with UBS who believe the prospects of a revival in the Euro in the near-term is unlikely. "Italy will likely face a polarising electoral campaign for the next few months."

Commentators are suggesting the two parties are likely to campaign heavily on the idea that they were denied the right to govern. “The campaign would be fought entirely as the People v the Palazzo”, said Francesco Galietti, an analyst at PolicySonar in Rome tells the Financial Times.

For those watching the Euro, it must be noted that the response of the European Central Bank will be key.

Markets had bid the Euro higher through the course of 2017 on an assumption the ECB would wind down its quantitative easing programme in late 2018 on the basis the economy was growing and financial markets were behaving.

This plan of action could now be thrown into doubt having witnessed the reaction by Italian bond markets and stocks. The ECB might now delay its exit from quantitative easing in order to shore up the Eurozone financial system.

This would therefore represent a significant stumbling block for Euro strength.

"The central bankers of the ECB will be aware of the disappointment that is reflected in the Italian election result and that this also constitutes disappointment with the ECB. No other institution represents the stony path towards economic integration in Europe in the same way. I would be surprised if the situation in Italy and the significance of the ECB was not going to be reflected in the many speeches to be delivered by ECB central bankers today," says Leuchtmann.

Of note, Bank of Italy Governor and ECB Governing Council Member Ignazio Visco will speak at the presentation of the Bank of Italy’s annual report, an event that should capture market attention.