There is an increased risk the single currency could give way to Sterling as a long-term defensive 'wall' on the charts comes under renewed pressure; but failure at this key level could see Sterling capitulate back towards the middle of its longer-term range.

The Pound is outperforming the Euro at the start of April which is a month that tends to typically deliver gains for the Pound. As a result of the strong start to the month the Pound-to-Euro exchange rate now sits at a key resistance level where there is a substantial risk of a breakout higher.

"EURGBP is down eyeing the lowest daily close for the cycle, which was just below 0.8720, even as the intraday low crossed below 0.8700 on three occasions before bouncing back into the range. The price action looks heavy – can the pair finally go over the edge without more concrete Brexit news to support Sterling?" asks John J. Hardy, Head of FX Strategy at Saxo Bank.

Commerzbank analyst Karen Jones has studied the EUR/GBP exchange rate - the inverse of GBP/EUR - and notes "attention is on the base of its range" in relation to the floor of the 6-month range at 0.8700, which she says is now coming under pressure. "A close below 0.8697 is needed to confirm the market is ready to head lower."

So the market is nearly there, and this is therefore a key moment for Sterling and the Euro which are looking to break new ground.

When markets trend they rarely move in straight lines but rather form peaks and troughs on their way up or down. The pull-backs during the corrective periods in a trend often end at one of four retracement levels of the prior move: 23.6%, 50.0%, 61.8% and 78.6%.

The chart below illustrates the point on EUR/GBP.

Further evidence suggests a breakout of the range is likely.

"The intraday Elliott wave counts remain negative and we have a confirmed sell signal on the DMI so we will hang on to our short positions for now," says Jones.

Elliot waves are elements of a complex form of cycle analysis which helps technical analysts forecast the next move in price action.

The DMI, meanwhile, is a type of price indicator which is made up of two lines, a +DMI and a -DMI, as shown in the bottom panel of Commerzbank's chart reproduced below. 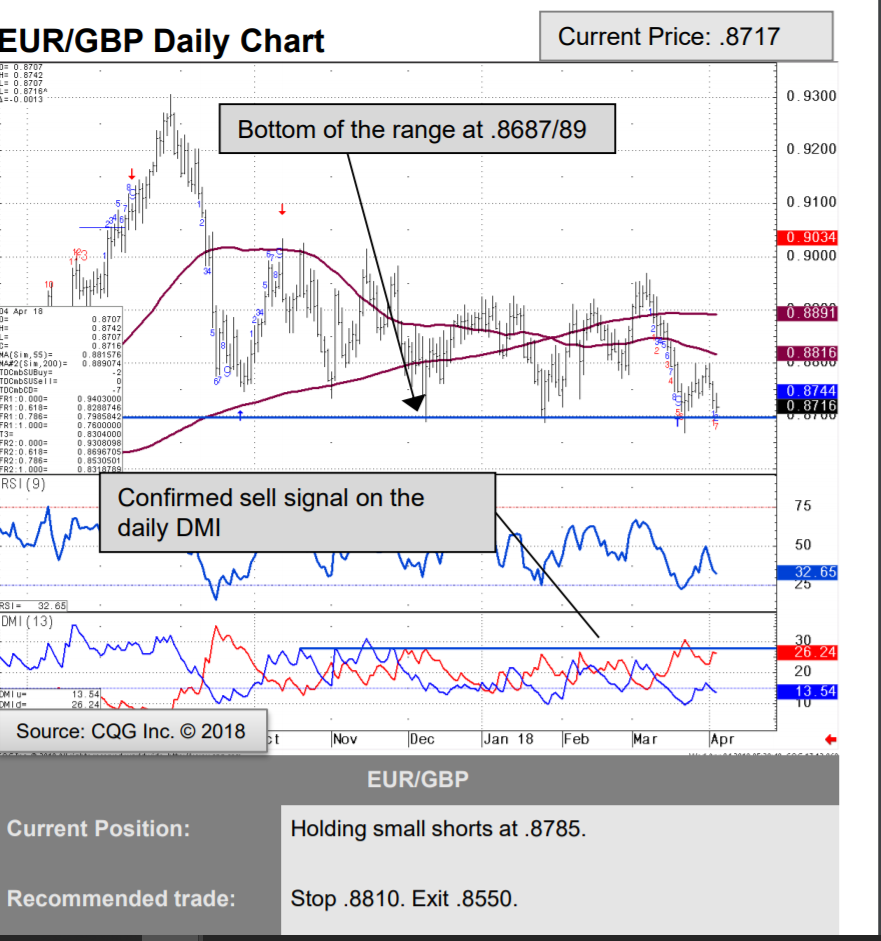 The +DMI measures how strong the underlying uptrend is the -DMI how strong the downtrend is, the strongest line provides an indication of which direction the trend is likely to go in, which in this case is the -DMI (red line) which has a higher score of 26.24 versus the +DMI's score of just 13.54.

This suggests downside pressure is dominant and increases the probability of a breakout of the range lower.

The same analysis, but in reverse, is true of GBP/EUR which would breakout of the range higher.

GBP/EUR has been in a range between roughly 1.11 and 1.15 for the past six months and despite repeated attempts to pierce the 1.15 ceiling, has repeatedly failed.

Eventually, however, we expect a breakout higher, into new territory above and the region of the 1.17s.