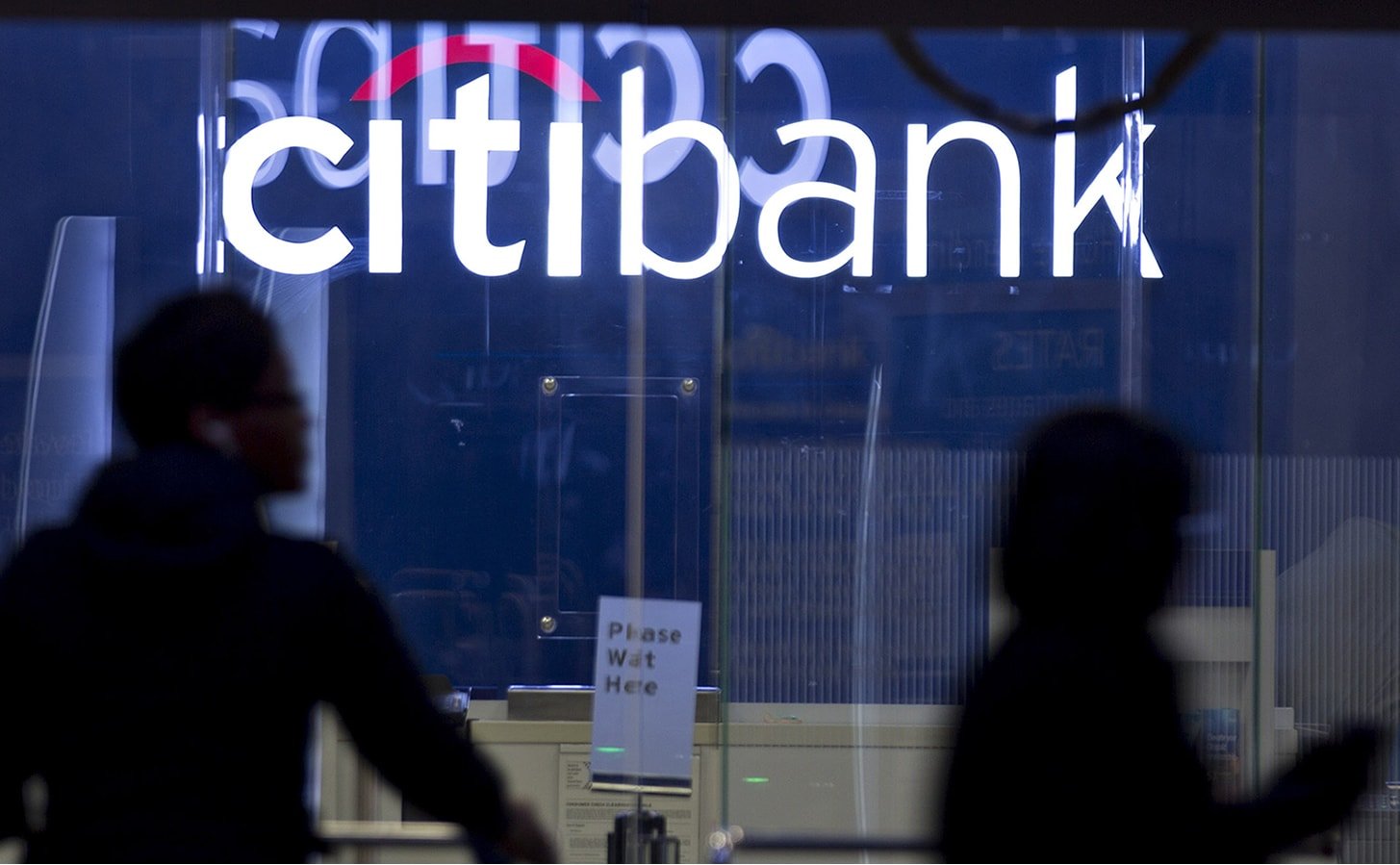 The world's largest foreign exchange dealer reckon the Pound-to-Euro exchange rate is pointed lower over the course of 2018.

Strategists with Citi tell institutional clients ahead of the the turn of the year that political risks are likely to keep a lid on Sterling whilst the Euro will be supported as the negative drag of politics in the Eurozone loses significance.

Furthermore, a rise in EUR/GBP will be aided by the outperformance of Eurozone growth relative to that of the U.K, ensuring the exchange rate rises towards parity versus.

This therefore sets Citi in the 'bear camp' of institutional analysts who see Sterling struggling in 2018; we reported this week that Société Générale now hold lowest GBP/EUR forecast in the investment bank sector.

However, those watching the exchange rate markets should be prepared for Sterling to make a brief recovery as some signs of progress in Brexit negotiations are delivered; but such bouts of strength should provide investors with an excellent, if short-lived, buying opportunity.

Citi see additional potential weakness in Sterling over coming months being largely driven by the risks of a 'no-deal Brexit' which remains an outcome that is firmly on the table.

Indeed the recent recovery in Sterling on optimism that talks will forge ahead looks misplaced to Citi.

"The UK has made progress in EU negotiations but we have unwound over 1/3 of the trade-weighted GBP weakness peak to trough post-Brexit referendum. This seems too high given the genuine pitfalls of trade talks and any agreement without access to the Single Market is essentially 'hard Brexit,'" argue Citi.

Analysts add that while, "no transition agreement, or a Corbyn government, are very unlikely" they nevertheless, "represent tail-risks that the market would deem chaotic."

Expect that concern to anchor the Pound.

Central Banks Heading in Opposite Directions

In addition - or perhaps alongside - politics, central bank policy will also likely be a key driver of EUR/GBP in the coming year.

Waning political risk in the Eurozone - Italian elections are seen as not being disruptive - should contrast markedly with the politically-charged atmosphere surrounding Sterling as Brexit negotiations grind on and politicians fight for their vision of what a future UK should look like.

Fading Eurozone political risks should allow the European Central Bank (ECB) to feel confident enough to dismantle its stimulus programme introduced to boost Eurozone inflation and economic growth. Of course, this same programme left the Euro incredibly undervalued, so withdrawing stimulus will help the Euro recover to fairer valuations against the likes of the Dollar and Pound.

The Pound, meanwhile, will be vulnerable to the Bank of England who might not raise interest rates at all in 2018 having raised them once in 2017.

Currently markets are expecting an interest rate towards the end of next year, but should this expectation fade then the Pound could well too fade alongside. Indeed, should the date be bought forward, or a second interest rate for 2018 be expected, the Pound would be expected to rise.

"The BoE has not hit peak dovishness unlike the ECB where guidance may have to shift hawkish," says Citi.

In comparison, it seems Citi think that the ECB has reached about as dovish (meaning advocating lower interest rates) as they can.

Outright positive factors for the Euro are set to continue, with annual GDP growth estimated at 3.0% (versus the UK's 1.5%), increased demand from international investors for Eurozone assets as stock markets rise, and a surplus in net flows (the current account) further supporting the Euro.

Political risks in Euroland have eased as 'Catalexit', a Merkel-less Germany and a 5-Star ruling government in Italy are all highly unlikely to come to pass.

Meanwhile, "the tail for the UK of early elections (and a new government), lack of sufficient progress and policy reversal from the BoE responding to the latter (or if data turned sour fast) represent more realistic risks than in Europe, where the base case is for benign outcomes," say Citi.

How Citi are Betting on the Pound and Euro

Citi advocates a trading strategy to profit from the expected rise in the Euro against Pound Sterling using derivatives called options in a specific type of trade called a 'call spread'.

Options are leveraged instruments with a set lifespan which enable traders to control risk.

Traders can purchase an option and if the market goes the way they guessed within its lifespan they make money depending on how far the market goes, if, however, the market goes the wrong way then they can leave their option to expire worthless, with their only loss  being the initial outlay - essentially capping their potential downside.

'Call spreads' is a specific options strategy used by traders who think prices will rise gradually rather than in volatile leaps. 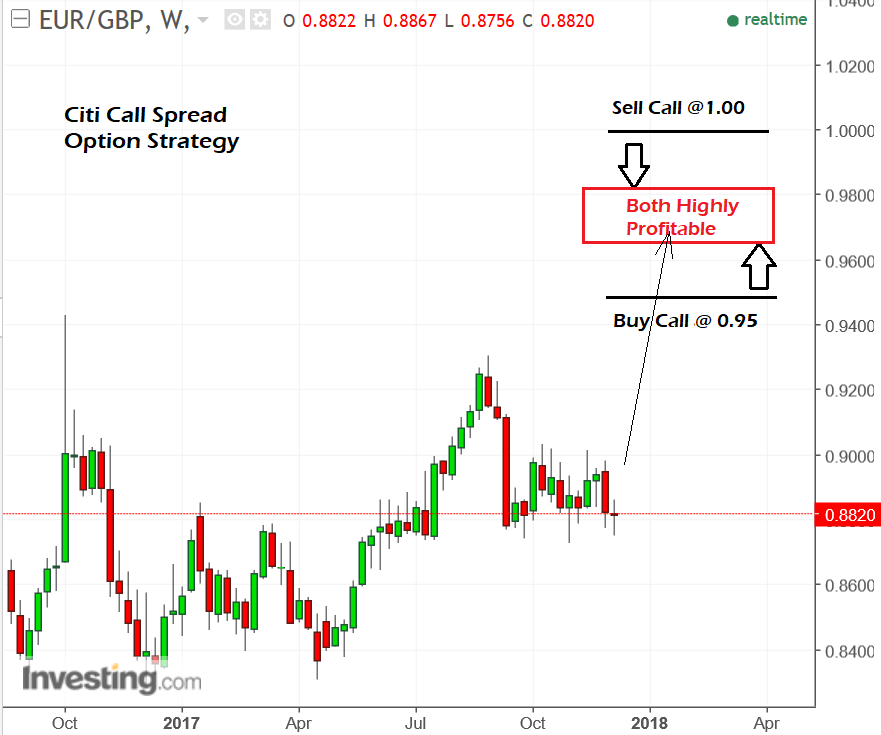 The strategy involves buying a call option at a, in this case, 0.95 EUR/GBP and selling a call-option at a higher price, in Citi's case at 1.00 EUR/GBP.

The assumption behind the trade therefore is that EUR/GBP will end up somewhere between 0.95 and 1.00 in 2018.