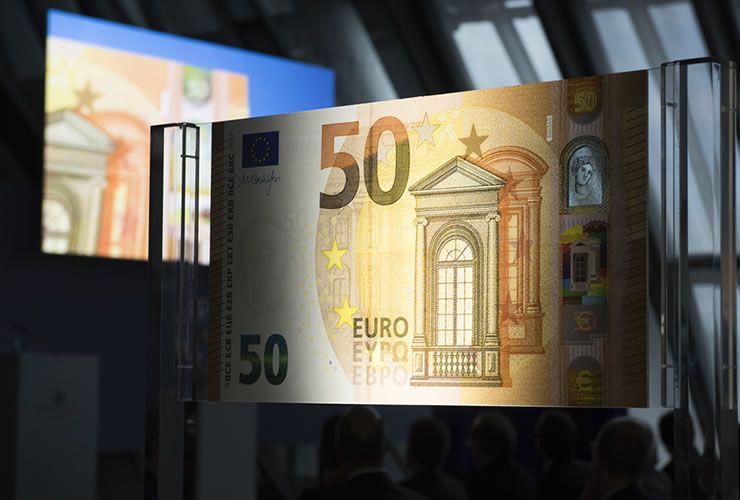 The Euro to US Dollar exchange rate (EUR/USD) has pulled back from its 1.20 highs amidst reports the European Central Bank (ECB) is intending to delay an announcement detailing the end of its stimulus program, whilst the Dollar punched higher following the release of jobs data on Friday September 1.

On the monthly chart, we note how during the previous month the pair rose to touch the 50-month moving average (MA) at 1.1843. 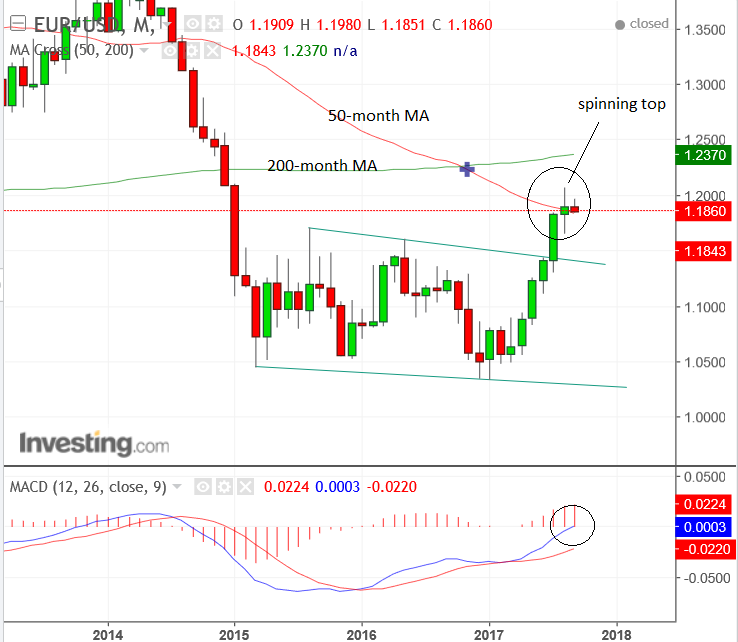 Moving averages are not just indicators of long-term value but also dynamic areas of support and resistance.

This is why the exchange rate pulled back from the MA and formed an indecisive spinning top candlestick pattern in August.

The meeting and repelling by the 50-month is a significant event as markets sometimes reverse after touching major moving averages such as the 50 or 200 MA, so it is possible the exchange rate could be in the process of reversing its uptrend and starting to move lower now.

On the daily chart, we see more detail in how the pair peaked on August 29, forming a bearish doji at the 1.20 highs before rolling over.

This was quite a bearish candlestick pattern and is unlikely to be broken above in the near-term. 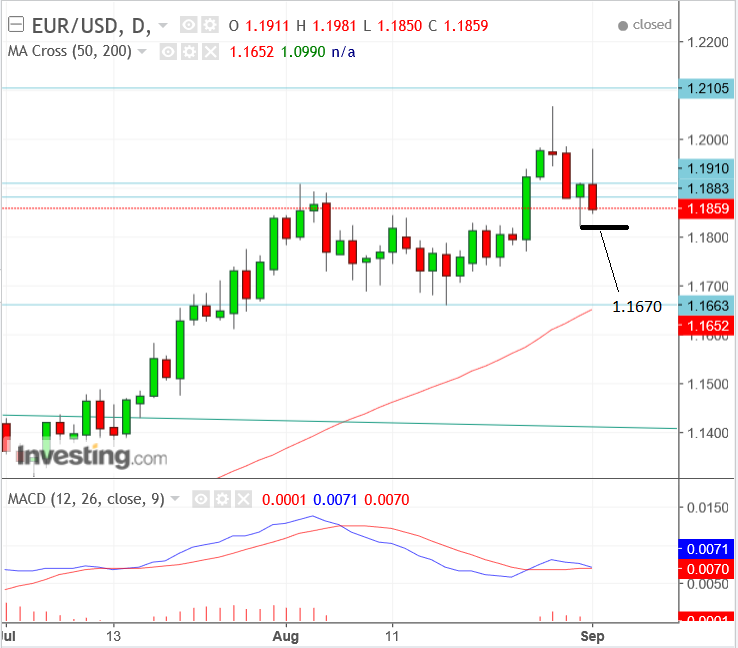 On the four-hour chart EUR/USD has formed a three wave a-b-c corrective pattern on its descent form the 1.20 highs.

Normally at this stage, such a pattern would signal the likelihood of a resumption of the trend higher, since it is only corrective and not a reversal, however, activity afterward has been chaotic and the long bearish candle circled in the chart below is a bearish sign.

If the uptrend was going to resume we would have expected a stronger response after the a-b-c.

We, therefore, feel a move lower, establishing a new sequence of bearish peaks and troughs down, is the more likely outcome and a break below the C-wave lows at 1.1823 could suggest the move down was the start of a new short-term downtrend. 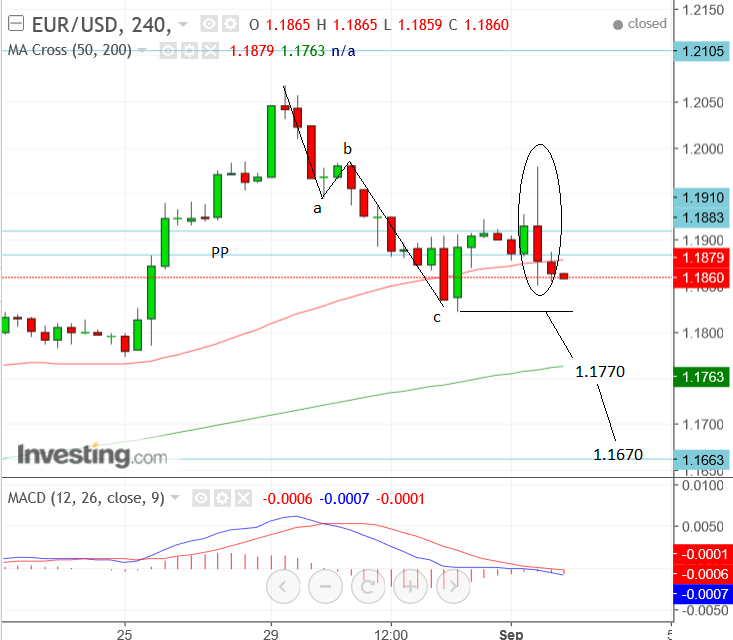 News, Data and Events for the Dollar

The Dollar ended the week on a high after the release of Non-Farm Payrolls, despite the lacklustre result.

The main event in the week ahead will probably be releated to political machinations surounding the debt cieling, although in the aftermath we expect it to be raised, given the new infrastructure required in the devestated area.

As far as hard data goes, there is nothing out on Monday as it is  Labour Day, a public holiday in the US.

Wednesday sees the release of ISM Non-Manufacturing PMI in January, which is forecast to come out at 55.3 from 53.9.

The Fed's Beige Book, which is an account of all the provincial Fed's economic performance is out at 19.00.

Thursday, September 7, sees the release of Initial Jobless Claims, which are forecast to rise to 241k.

Also watch out for Fed speakers and the hot topic of whether there is likely to be another rate hike before the end of the year or not.

In relation to Fed speakers in the coming week, Canadian investment bank TD Securities have said the following:

News, Data, and Events for the Euro

The main event for the Euro is the European Central Bank (ECB) rate meeting on Thursday.

This could prove a volatile event for the Euro as the ECB is expected to comment on when and by how much it is going to reduce its bond purchase program - or QE as it is more familiarly known.

Back in June, the governing council said it would discuss exiting the program in "the fall" and market participants have taken this as meaning possibly September; probably October.

The program is officially set to end in December, but analysts now think the ECB will extend it well into 2018 if not 2019.

The main reason for expecting an extension is the strong Euro which is likely to weigh on inflation by making imports cheaper.
Canadian investment bank (IB) TD Securities think the ECB will substantially revise down their inflation forecasts at the September meeting and use that as a reason to extend QE.

"We look for forwarding guidance unchanged, and substantial downward revisions to the 2018-19 inflation projections due to the stronger EUR, but with no explicit push-back against EUR strength," said TD, who added that in the press conference after they think Draghi will hint at an extension of QE into 2018:

"We think that Draghi will point to low inflation to suggest that the end of QE is still some ways off, with no specific end date in mind, leaving a dovish tone. Anything that points to a more specific end date would be hawkish."

Robust economic growth reflected in a recent run of positive data combined with comments from two ECB officials downplaying the strong Euro, however, suggest there is still a chance the ECB may be keen to wind down stimulus, which is rising to an astronomical 4.5trillion.

"The issue limits are going to force them to exit prematurely. They cannot duck the consequences indefinitely," commented Richard Barwell of BNP Paribas, in reference to the unprecedented size of the ECB's balance sheet and the financial risks they might be storing up.