The Euro is forecast to come under further pressure against the British Pound by analysts at Barclays and KBC Markets who have confirmed they are strategically aligned in Sterling's corner for the short-term.

The pro-GBP stance comes at a time Pound Sterling appears to be finding a better bid on global foreign exchange markets. The Pound to Euro exchange rate has risen from a mid-March low at 1.1380 to today’s levels towards 1.1670.

Over the course of the past month the Pound has advanced by 1.31% taking Sterling's losses against the shared currency down to just 0.14%.

Substantially higher-than-expected UK inflation and a more hawkish tone from the Bank of England supported Sterling in March and allowed it to pull back lost ground.

Meanwhile, on the Brexit front all negative news appears to be already discounted into the price allowing the British Pound to find some support. With the Article 50 letter now delivered and Parliament in recess, Brexit focus is likely to shift to the EU Summit at the end of April.

Trade of the Week: Bet on More Pound Strength

Strategists at Barclays reckon the recent strong run witnessed by the GBP could run a little further.

Those who regularly visit Pound Sterling Live would not be surprised by this as we have previously reported Barclays to be bullish on Sterling’s prospects following the trigger of Article 50.

So far the call by Barclays has been correct, so we would not choose now as the time to doubt them.

“The triggering of Article 50 last week should usher in a more rapid expansion of information about the ultimate shape of Brexit and, as such, should progressively reduce the uncertainty premium in GBP, leading to sustained (but volatile) appreciation,” says Hamish Peppter, an analyst with Barclays in London.

An additional development since Barclays last updated clients on Sterling’s prospects has been the improvement in one very important piece of economic data - the UK’s balance of payments.

“The rapid narrowing of the UK current account deficit, confirmed in Friday’s data, and extremely short investor positioning should accelerate the move,” says Pepper in a note to clients dated April 2.

It was revealed at the end of March that the UK’s current account deficit - which is basically the country’s bank balance with the rest of the world - had narrowed sharply on an improvement in UK exports.

This leaves the Pound less exposed to a reliance on foreign investor capital inflows. 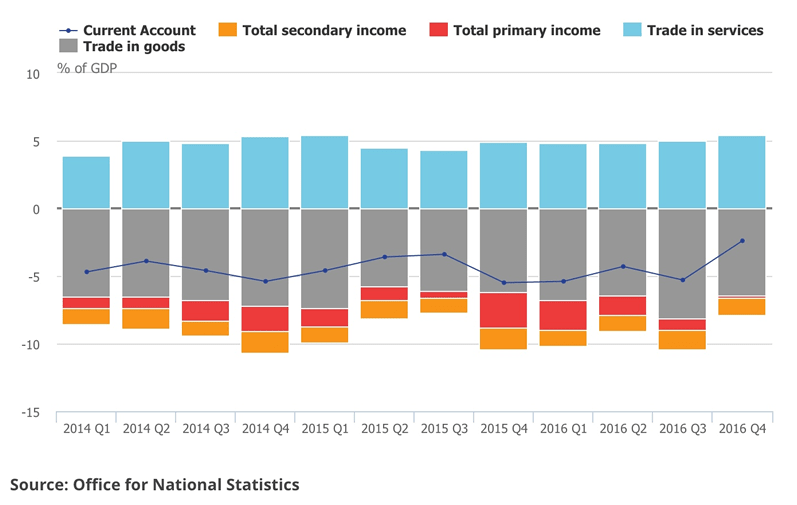 In contrast, Barclays expect the release of the ECB minutes, reiterating a balanced tone for the ECB, to weigh on the EUR.

“With EURGBP falling through key technical support last week (the convergence of the 50dma, 200dma and 23.5% Fibonacci retracement of the June 2015 to October 2016 move), short EURGBP is a compelling trade this week,” says Pepper.

A key risk to the trade is Tuesday’s expected declaration by the EU Parliament that may contain tougher language than markets currently expect.

“But we expect any Sterling negative response to be short lived,” says Pepper. 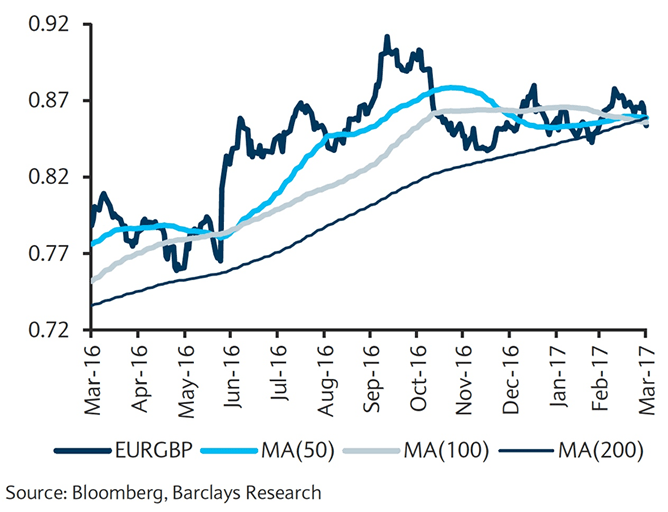 This trade recommendation is valid from the Wellington open Monday morning to the New York close Friday.

The more constructive tone towards Sterling is not limited to Barclays.

Piet Lammens at KBC Markets has confirmed he has turned more constructive on the currency’s prospects against the Euro following the recent period of strengthening.

“We changed our short-term bias on EUR/GBP from positive to neutral,” says Lammens, an analyst with KBC Markets in Brussels, in a note dated April 3.

Further consolidation in the mid-term sideways range might be on the cards.

“The return below the 0.8592 previous break-up suggests that a full retracement to the 0.8402 range bottom is possible,” says Lammens.

“We are not convinced that the Bank of England will raise rates anytime soon, even not after recent higher inflation data,” says Lammens.