Pound Sterling continues to weaken against the Euro as another noted analyst joins the camp of forecasters who expect GBP/EUR to fall to parity over the long-term.

GBP remains under notable pressure against both the Dollar and Euro at the time of writing as it is yet to recover from the hangover following Friday's flash-crash.

"There's no new news or data in the UK, but the Pound's still falling. In real effective terms, Sterling is 10% lower than it was in 1992 after leaving the ERM and is now weaker than it was after Lehman," says Kit Juckes at Societe Generale writing from London.

Press comment is now shifting to embracing the positive effects of a weak Pound and Juckes says in due course that'll be true but warns any further weakness from here might simply reflect loss of confidence and be bad for UK assets (gilts, equities, house prices, you name it...) in general.

"The market's very short, but if Sterling weakness starts to feed weakness across assets, we will have all the conditions for a classic overshoot to start," says Juckes.

Expect sell-offs to be deep and recoveries light.

"Rallies will now be seen as a response to immediate oversold readings only," says Lucy Lillicrap at AFEX in London, "initial support probably extends to 1.0950 or so but rallies face resistance at 1.1225 then 1.1325 as well."

However, it's not likely to be one-way traffic over coming days and some kind of consolidation will likely establish before any continuation in the broader downtrend.

Looking at the charts, studies do suggest a relief rally is due.

GBP/EUR has broken below the lower border of a downward sloping channel and formed a long-tail Hammer candle, which is often indicative of the downtrend reaching a point of exhaustion.

The long-tail Hammer has formed below the lower Bollinger Band, the light blue, shaded region around price: 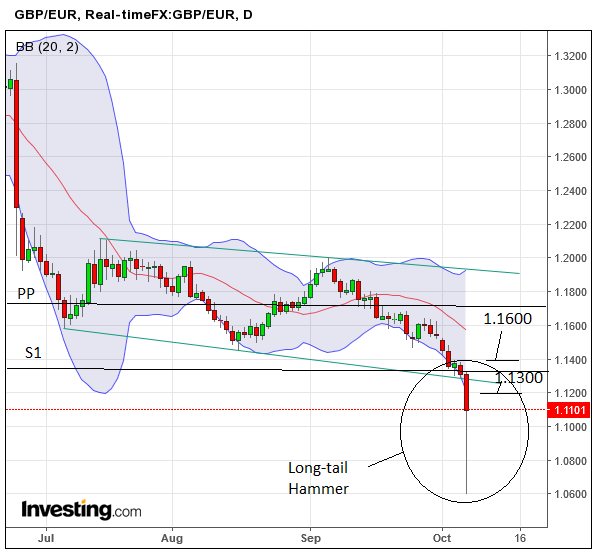 The Bollinger Band is an envelope around prices, calculated by taking the 20-period simple moving average and then marking two lines, one above and other below which sit at 2-standard deviations from the mean.

Theoretically, prices move within the bands for 95% of the time.

This means that when they stray outside the bands there is a high probability they have reached an extreme and will revert to the mean – or in layman’s terms move back inside.

When a move outside the bands happens in conjunction with a long-tail hammer it increases the odds prices will move back inside the bands or even reverse trend.

These set-ups have a high probability success rate of reversal and a move above 1.1200 would likely lead to 1.1300, however, between 1.1300 and 1.1400 there lies formidable resistance blocking the way.

Parity in GBP/EUR as a Long-Term Target

October's run lower in Sterling has seen those analysts who forecast parity in the Euro and Pound rate suddenly going from outlier to sage.

Read our coverage of the parity calls made by UBS here and HSBC here.

"We had the 6% drop during Asian trading hours on Friday, probably because of some technical issues, but the direction is clear. What matters now is not only whether the UK will maintain its access to the single market, but, more generally, policies on businesses.

"Although it is still too early to predict this in greater detail, we remain bearish on the exchange rate over and above the 17% drop in sterling seen over the past three months.

"Personally, I could see parity to the euro.

"After all, this is a country running a current account deficit of about 5.7% of GDP – which translates into a need to attract foreign capital to the tune of about GBP 10bn a month just to finance the over-consumption and to keep the FX stable."

It must be pointed out that Neilsen's views are not the official view of UniCredit who maintain a base-case scenario that parity will be avoided.

October has shown us that the UK currency no longer follows domestic data and is now almost exclusively tuned into headlines regarding Brexit.

The bogeyman right now is the prospect of a hard-Brexit - one where the UK sacrifices access to the single market in exchange for full sovereignty.

Markets are forward-looking in nature and the prospect of the fundamental framework of the UK economy being shaken up over coming years easily trumps the almost irrelevant monthly data releases.

That said, it is unlikely that headlines will only yield one-way traffic to a hard-brexit.

There is a huge opposition to such a scenario while others suggest the Government are likely to enter negotiations with as tough a line as possible so when they row back they find theselves in the middle of the stream.

We note the currency is also grossly oversold following Friday's highly-publicised flash crash - there is the risk that a recovery bounce takes place over coming days.

The apparent contradiction between technical signals of downside exhaustion and fundamentals, which remain bearish, could be explained by the fact the Pound may now be close to pricing in the possibility of a ‘hard Brexit’ and therefore require ever harsher headlines to drive further weakness.

Nevertheless, buying Sterling in anticipation of such a bounce is a risky move as it is akin to catching a falling knife.

Most traders will be waiting for some form of a base to form before bidding the currency higher.

The Tapering Debate is Key Fundamental Driver for the Euro

We may have entered a fresh week but the key underlying topic for the EUR remains essentially the same, that is of course is the discussion of potential European Central Bank (ECB) tapering.

This is the process whereby the ECB starts removing the support it has given to the European economy and is at its heart a positive theme for the Euro.

Ahead of additional ECB speakers in the week ahead, Mersch and Coeure we have had Vice President Constancio argue that there has been no discussion of tapering.

This comes as he describes the recent macro resilience as being reflective of the ‘actual and expected’ stimulus in the system.

"We would argue the debate regarding a progressive reduction of stimulus is one for ’17, indeed we expect a gradual reduction in ECB balance sheet expansion will  encourage a stronger EUR. However, prior to then we still favour modest downside risks to persist," says Jeremy Stretch at CIBC Markets in London.

On this topic note that the recent Deutsche Bank crisis actually strengthened the single currency rather than weakened it, for several reasons.

The first of these was the fact that it lessened the chances of the ECB expanding stimulus and pressuring interest rates and the euro with them lower.

Low-interest rates take a toll on bank profitability as banks make less money from loan interest, one of their principle sources of revenue.

As such one of the last things the ECB would want to do would be to further endanger the health of its already vulnerable banks.

Secondly, the crisis reverberated around the globe leading to an immediate sale of risky assets, many of which had been funded by euro-denominated loans.

This led to a repatriation of euros after the assets were sold, increasing the demand and therefore the value of euros.

Finally, weak Eurozone banks have been blamed for not being able to ‘recycle’ or lend out the large current account surplus, leading to net euro inflows and therefore a stronger currency.

Data for the Euro

In a relatively quiet week, the main release for the Euro is the German ZEW sentiment survey.

The ZEW asks financial professionals for their opinion on the current situation and the outlook for the German economy.

It is considered a useful and fairly reliable indicator of future activity.

The forecast is for a balance of plus four in favour of a more optimistic assessment of the economy, from the previous 0.5 result.

Data for the Pound

On Friday, October 14, the BOE host an event which could impact on the outlook for monetary policy.

The “Future Forum” sees all the members of the MPC speak.

“The subject of the Forum is "How can the Bank service society and maintain stability in times of change?" which doesn't sound like a policy-heavy day, but with microphones in front of the Governors and no MPC meeting this month, there will be ample opportunity to provide views.