The British pound is has made a technical break higher but faces volatility in the form of the October policy decision at the European Central Bank (ECB).

The outlook for the British pound to euro exchange rate from a technical perspective now relies on the ability of the GBPEUR pair to hold above the 1.36 / 1.3550 zone and carve a base to the declines.

Sterling has been falling against the euro since reaching a best just north of 1.44 in mid-July. This has created a downward sloping channel which has dictated the rate and breadth of decline. As such it gives us a good indication of potential future moves in the sterling to euro rate as long as the conversion remains in the channel.

We could be witnessing a move outside of this important zone.

The 1.36 / 1.3550 support area also coincides with the point at which the currency pair has breached the downward channel - to the upside - which hints at the previous trend losing its influence:

Note too that at the time of writing the 20 day moving average is located at 1.3550; a level above which the GBPEUR must stay above from a momentum perspective. 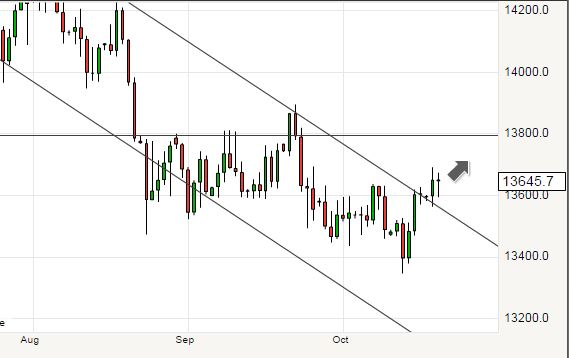 A potential target for any extension of the recovery would be the 1.38 threshold; we believe that this area still retains significance for the exchange rate noting the resistance it provided in September. We believe that there is 'clear air' until this point within which the British pound can advance.

Beyond here we would expect the bulls to gather in strength and rallies could well extend towards 1.40 which provided support for the exchange rate in July / August.

Be aware though that the break higher could prove false - on Wednesday we have seen the pair threaten to re-enter the downward channel with the momentum indicator on the daily chart turn negative confirming buying interest is fading.

Expect trade in the euro to be subdued leading up to the October policy decision.

Much has been made of the possibility that the ECB will expand its asset purchase programme or not.

"The European Central Bank may not ease at its decision this week, but further action by the end of the year is quite possible, and quantitative easing now seems increasingly likely to extend beyond the projected fall-2016 endpoint," says Eric Lascelles, Chief Economist, RBC Global Asset Management.

Most commentators we follow are in agreement that while further ECB stimulus is in the offing, October is too early.

"Dataflow in our view is more and more consistent with an additional layer of monetary stimulus, but the ECB-speak - and in particular Benoît Coeuré on Monday - suggest that a consensus may yet take a bit of time to form at the Council," says Gilles Moec at Bank of America Merrill Lynch.

Herein lies the risk - if the ECB wants to send a clear message regarding the euro becoming too expensive once more then the current expectations would allow for the most powerful impact.

The euro will likely fall faster and further should the ECB catch markets unaware.

Those currency traders with a high level of risk aversion will be wary of this prospect and will therefore take exposure against the euro off the table ahead of Thursday allowing the GBP/EUR to edge higher.

However, most analysts are in agreement that there will unlikely be any earth-moving announcements ahead.

ING's Petr Krpata says the present range-bound direction in the euro / dollar will be maintained.

Krpata argues that fair value in EURUSD is at 1.15 and the exchange rate is presently trading below fair value because the market currently prices in futher action at the ECB in the form of either (a) an extension of the current pace of EUR60bn monthly purchases by another two quarters or (b) a top up of the current programme by almost EUR30bn per month over the remainder of the programme.

Additional moves at the ECB are therefore priced into the conversion, the big game-changer, it is argued, will be moves by the US Federal Reserve and the Bank of England.

“In the absence of the Fed’s move, expect a broad EUR/USD range trading. Should the Fed hike rates in December (ING base case), we expect EUR/USD to move towards/below the 1.10 level,” says Krpata.