The Euro to Dollar rate came close to recovering 1.15 this week following a break above a notable level of technical resistance on the charts and in a rally that some analysts say is being helped along by Eurozone stock markets and their nascent outperformance of those in the U.S.

Europe’s single currency made a break toward 1.15 on Thursday after rising above technical resistances around 1.1356, 1.1379 and 1.1440 previously on Wednesday as its rally from last week’s lows just beneath 1.13 extended amid widespread losses for Dollar exchange rates.

Dollars were sold widely, which lifted the Euro sharply from Tuesday in price action that many analysts attributed to profit-taking in parts of the market that had bet the U.S. unit would appreciate as the Federal Reserve (Fed) edges toward normalising its monetary policy.

“Tactically, the combination of momentum and portfolio adjustments can guide the pair to 1.15. it is a similar story for GBP/USD where the significant short base is getting decimated,” says Kenneth Broux, a strategist at Societe Generale.

“One other contributing factor to the profit taking in the dollar could be the lightening up of exposure to US Tech stocks and rotation into more appealing/value regions and indices instead of tech/growth-weighted ones,” Broux said on Thursday. 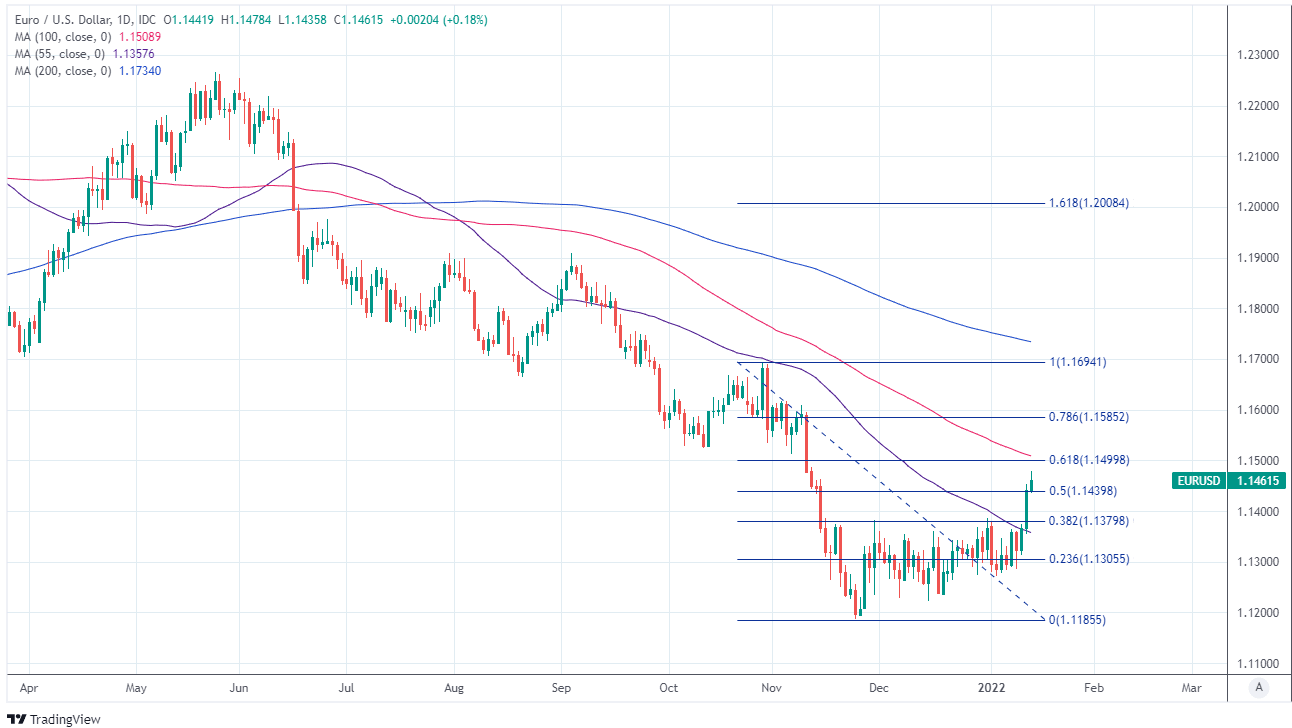 While the Dollar’s heaviest losses coincided most closely with the hours after Fed Chairman Jerome Powell indicated in Congress that the market was right to wager that U.S. interest rates could be raised as soon as March, some analysts see other factors also aiding the Euro to Dollar rate’s rebound.

One of these is the recent underperformance of U.S. stock indices compared with their global peers, which has in turn aided a tentative outperformance by Eurozone stock markets that have in most cases further extended their 2021 rallies thus far in the new year.

CitiFX Strategy sees the case for the USD pullback, flagging "three culprits behind this price action":

Major U.S. indicates, on the other hand, fell between -0.5% and -2.9% during the opening fortnight of January and may have served to encourage the declines seen across Dollar exchange rates while providing an additional tailwind to EUR/USD.

Stock markets can sometimes slow and even fall when central banks reduce monetary support for economies, as the Fed has begun to do in the U.S., and wherever this leads investors to shift out of one country’s market into another it can also have an impact on exchange rates.

“Toss in the massive buildup of long USD positions going into 2022 and you have a pretty clean ex-post explanation for what has happened with the USD,” says Brent Donnelly, president at Spectra Markets and a veteran currency trader.

“It’s showtime for EURUSD bulls. We have been stuck in this 1.1230/1.1385 EURUSD range for six weeks. Looks like a breakout. Today’s close is important. Above 1.14 is a clean break of horizontal resistance. Below 1.1380 is a slingshot reversal,” Donnelly wrote in a Wednesday commentary.

International capital flows connected with the stock market tend to have a larger impact on exchange rates than those associated with the bond markets because it’s often the case that stock market flows are not currency hedged to the same extent as those involving bonds. 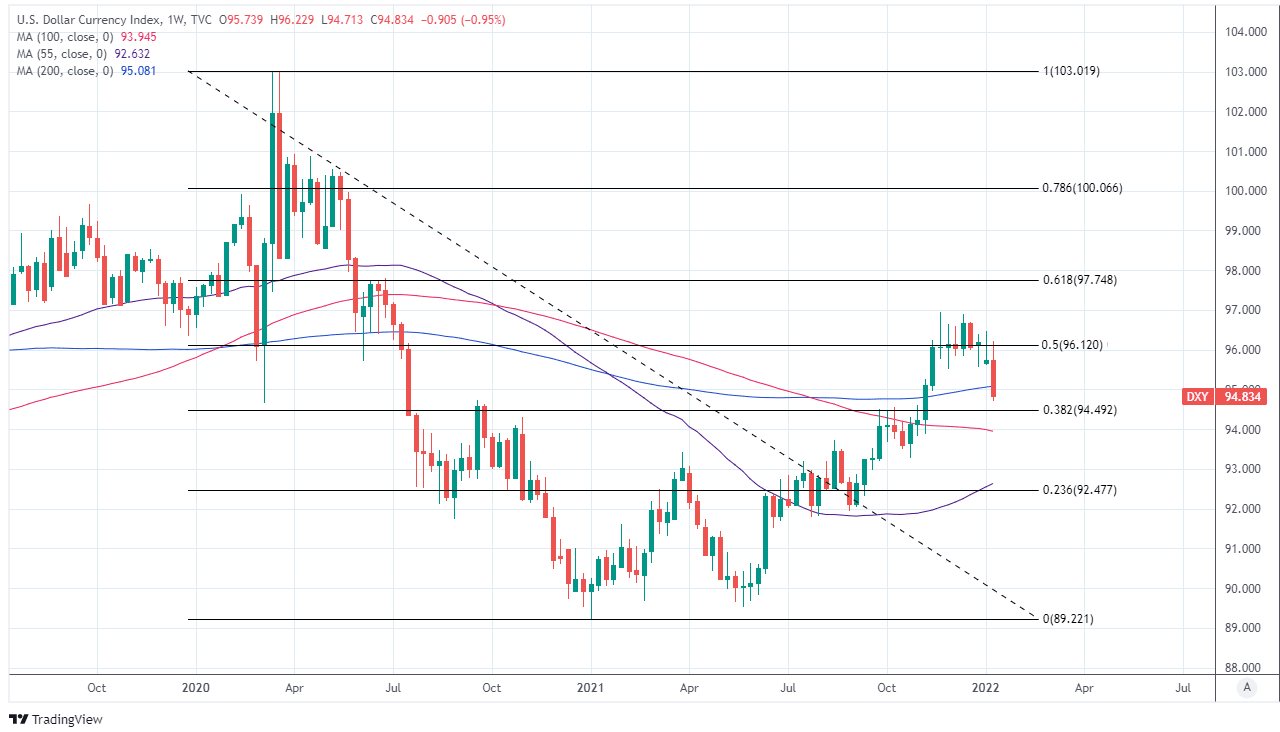 Above: U.S. Dollar Index shown at weekly intervals with Fibonacci retracements of 2020 recovery indicating technical resistances to a recovery.

With stock market investors less likely to neutralise their footprint in the currency market, the recently widening difference in performances could have been a contributor to this week’s rally that had lifted the Euro to Dollar rate back to within close reach of 1.15 by Thursday.

“We think its inferior carry status and restrictive Fed policy outlook, that includes QT this year, still makes chasing an upside move a bit elusive and premature at this time,” says Mazen Issa, a senior FX strategist at TD Securities, referring to the Euro-Dollar rate.

“We think relative equity performance will be the canary in the coalmine to shape EURUSD later this year, particularly as relative policy stances could make European risk assets more appealing,” Issa and colleagues said in a research note on Wednesday.

This week’s price action is a further sign of the Dollar tiring following a six month rally that was ignited in June last year when the Fed first indicated that it could begin looking to withdraw the extraordinary monetary support provided to the U.S. economy since the onset of the coronavirus crisis.

Since then the Fed has readied the market for a winding down of its quantitative easing programme that is now underway and set to conclude in March, while making clear more recently that its interest rate is likely to begin rising over the coming months.