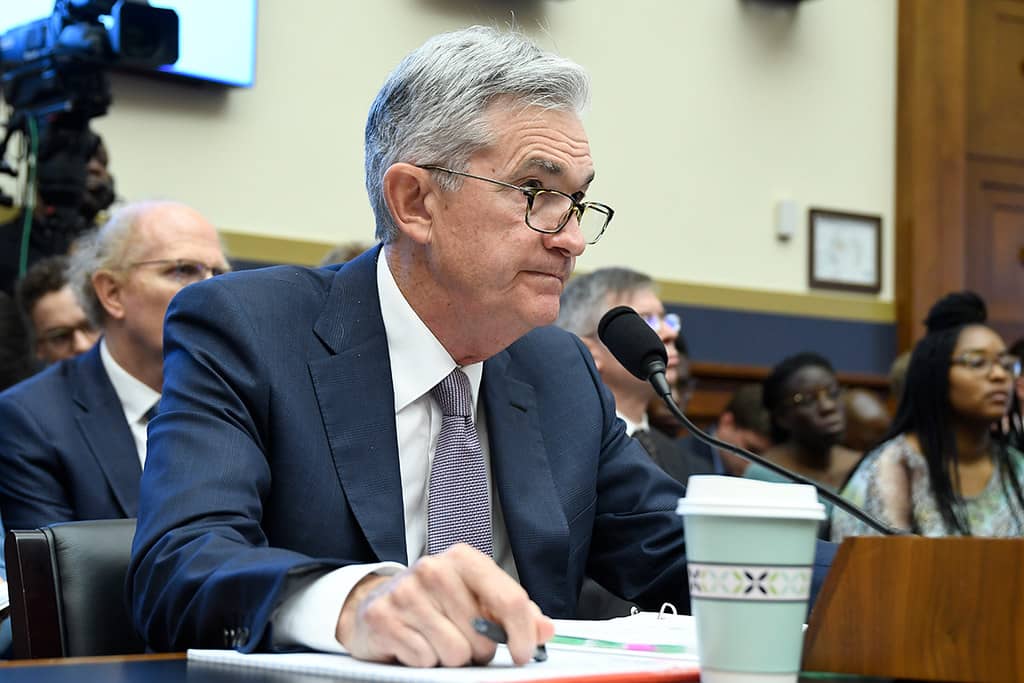 The Euro to Dollar exchange rate moved towards the top of its December-January range at 1.1370 in the wake of another broader turn lower by the Dollar after the Chair of the Federal Reserve said there was no rush to reverse the quantitive easing programme.

Jerome Powell told U.S. lawmakers the central bank would not rush into reversing its quantitative easing programme, a process known as quantitative tightening.

Powell told a Senate Banking Committee hearing over his re-nomination as Fed Chair that "we're going to have to be both humble and a bit nimble" when reversing its quantitative easing programme.

"While the comments continued to strike a more hawkish tone that has been evident recently, there was some relief amongst market participants that no clear indication was given that the Fed is in a rush to speed up tightening plans further at this stage," says Lee Hardman, Currency Analyst at MUFG. 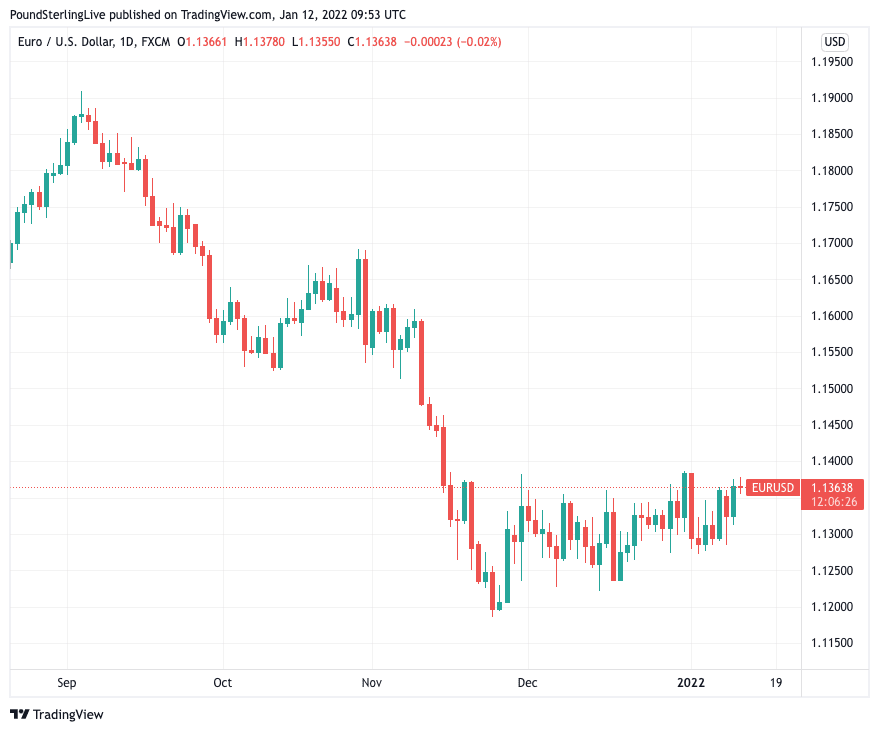 Above: EUR/USD, shown at daily intervals.

The reaction by currency and equity markets to Powell's appearance before the Senate Banking Committee suggests investors fully appreciate this is a Fed ready to raise interest rates and embrace quantitative tightening.

The ongoing reluctance by the Dollar to rally of late - despite a steady flow of hawkish Federal Reserve commentary - has surprised some Dollar bulls in the analyst community who are now questioning the assumption that 2022 would start with more Dollar strength.

"The US dollar has failed to advance further on the back of the Fed’s hawkish policy updates over the past month or so," says Hardman.

U.S. bond yields pared recent gains and the Dollar lost altitude and recorded its weakest level since November in the wake of Powell's appearance, with the Dollar index - a broad measure of the currency's value - falling to 95.53 in mid-week trade: 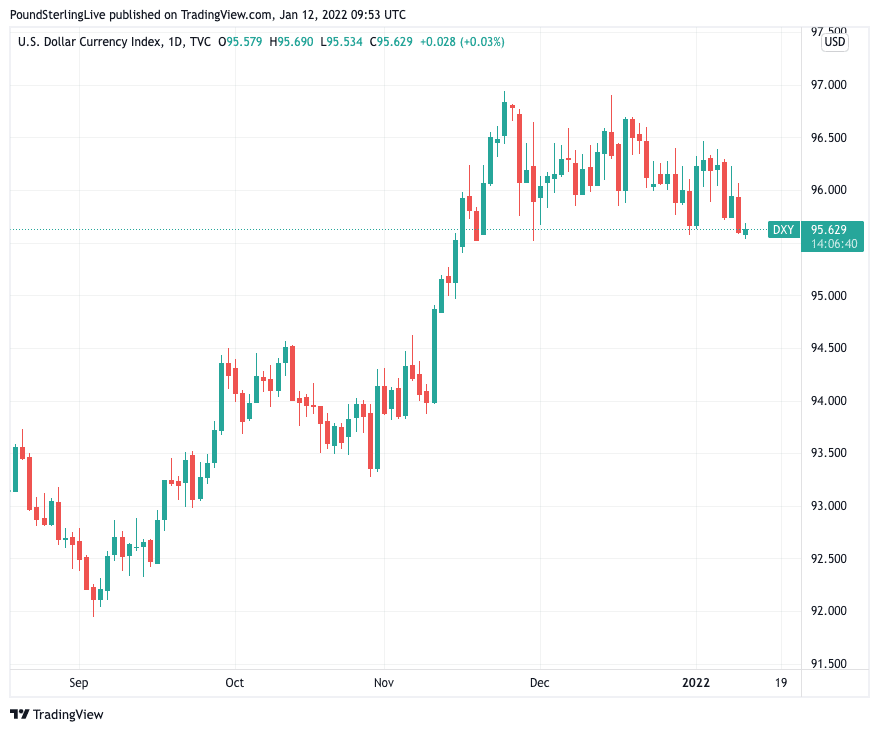 Above: The Dollar index, shown at daily intervals.

Market volatility spiked last week after the Fed released the minutes to its December policy meeting, revealing that policy makers had become so concerned about inflation they might hike rates as early as March.

The Fed also said it would need to start reversing its quantitative easing programme in a process called quantitative tightening.

Three to four rate hikes are now priced into 2022 by money markets, substantially more than was the case at the mid-point of 2021.

A ramp up in rate hike expectations has been a major component of Dollar strength in the second half of 2021.

The question for currency markets now is whether this theme can extend, or whether it has run its course.

If the latter, then the Euro-Dollar could recover from recent lows.

"Market speculation has been building recently that the Fed will speed up plans to deliver four rate hikes this year and start to shrink their balance sheet from potentially as early as the middle of this year," says Hardman.

For the Dollar to lift further the yield paid on U.S. bonds would be expected to rise; however yields appear to have topped out for now: 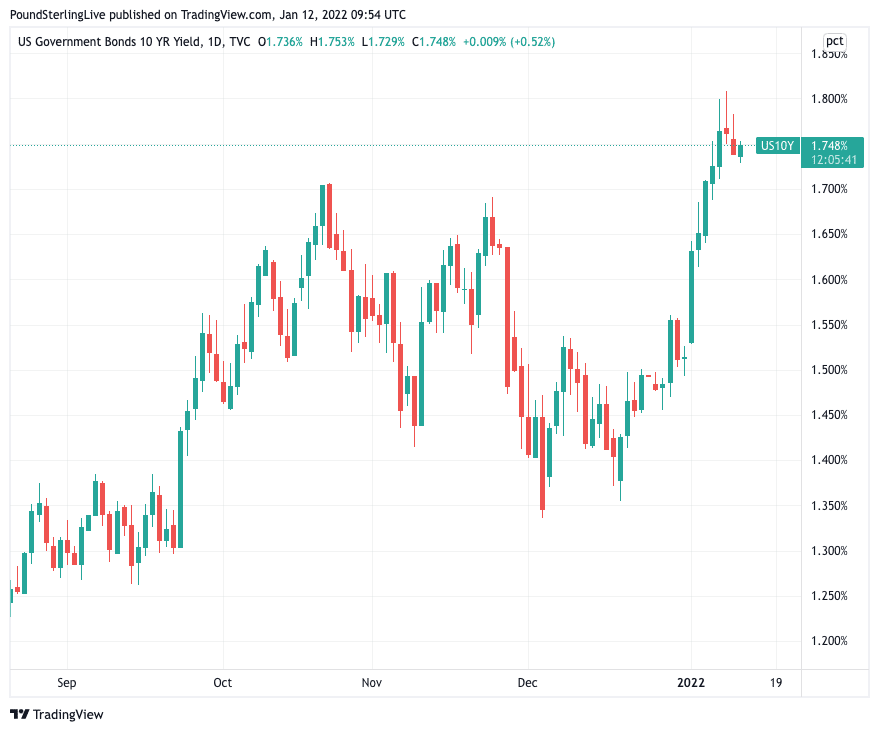 "Between the reiteration that the FOMC won’t allow inflation to become 'entrenched' and the reassurance that the base case scenario is still for inflation to peak in mid-2022, a market that was already pricing in three and a half hikes by the end of 2022 unsurprisingly gave a greater weight to the latter message by Powell," says Francesco Pesole, FX Strategist at ING Bank.

"The overbought dollar came under pressure across the board," he adds.

The Euro-Dollar exchange rate has respected a range located between ~1.1230 and ~1.1390 since the beginning of December in trading that can be described as consolidative.

"The dollar’s pullback sent EUR/USD near the top of its recent range. We are inclined to think markets will keep buying the dips in the dollar, although a break above the key 1.1386 December 31st high today would likely challenge this view," says Pesole.

MUFG's Hardman says Dollar price action "has been disappointing over the past month or so when the Fed has made a hawkish pivot."

It suggests more caution in chasing the dollar higher in the near-term" he says.

MUFG are backing a stronger Dollar in 2022, putting them in line with consensus expectations.

The softer Dollar dynamics, despite the more hawkish Fed, is therefore contrary to these expectations but Hardman and colleagues are not yet ready to abandon their strong-Dollar thesis for 2022 just yet.

"We still believe the ongoing hawkish shift in Fed policy and higher yields should encourage a strong US dollar," says Hardman.

Powell said the Fed will begin quantitative tightening "at some point, perhaps later this year".

This contrasts to the FOMC minutes which said quantitative tightening would be delivered "sooner" and "somewhat faster" than in the previous tightening cycles.

Hardman points out it took around two years for the Fed to shrink their balance after the first rate hike in the previous cycle.

Powell said he expects it to take "two, three, four meetings" for the Fed to finalise plans for quantitative tightening.

"Overall the comments have provided some near-term relief that Fed Chair Powell’s comments were not even more hawkish," says Hardman.