The Pound to Euro exchange rate has tested the 1.1869-71 20-month high on three occasions over the course of the past three trading days after the resistance at 1.18 finally gave way in the previous week. 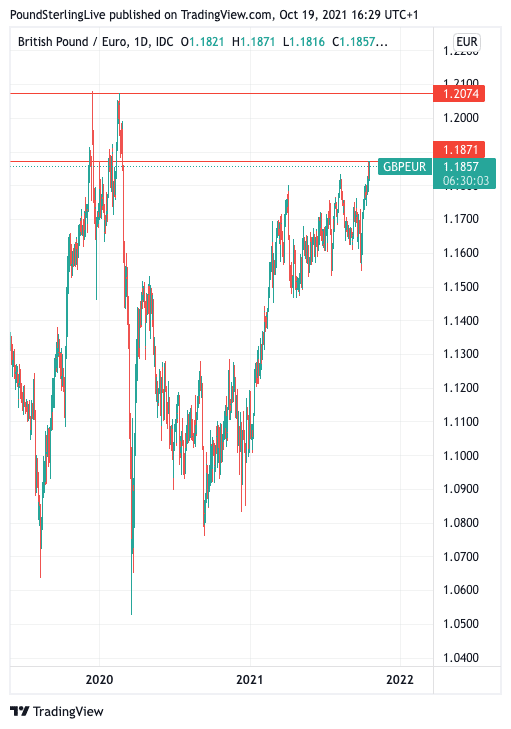 The overwhelming fundamental narrative surrounding all things Sterling remains an expectation the Bank of England will raise interest rates, either in November or early 2022, with an initial hike expected to be followed by a subsequent series of rate rises.

A higher Pound-Euro rate is consistent with a view that the Bank of England stands ready to raise rates ahead of the European Central Bank by a good number of months.

"In central banks’ measure of time, this is light years ahead of the ECB," says Kenneth Broux, strategist at Société Générale.

Technical studies from Soc Gen finds the Pound-Euro rate's breach of the April / August highs points to a "persistence" of upward momentum.

The next technical projections held by Soc Gen is located at 1.1926.

The Bank of England's objective in raising rates - as per the communications of Governor Andrew Bailey - is to ensure the current temporary surge in inflation does not become entrenched, via business and consumer inflation expectations.

Bailey appears keen to emphasise that the Bank's primary objective remains inflation targeting and with inflation looking to surge over coming months he is keen to ensure the market and consumers are aware of the Bank's steadfast commitment to price stability.

For some investors this eagerness to raise rates early can offer some near-term support to the Pound.

"It looks like there is room for GBP to strengthen again to reflect the significant repricing of monetary policy tightening in the UK," says Dominic Bunning, Head of European FX Research at HSBC.

However, there are numerous currency strategists and economists wary of betting on further Sterling strength on the fear that the Bank is moving too early on rates and risks further slowing a faltering economic recovery.

"Sterling is unlikely to get lasting support from the BOE raising rates because of supply constraints and already tight labour markets," says Anders Eklöf, a foreign exchange strategist at Swedbank. "Fading Sterling strength on a BOE hike sounds like a good tentative idea in our view."

Soc Gen's Broux says "a first rate increase in November should not be taken lightly" as communications from the Bank of England shows that once interest rates reach 0.50% it will cease to reinvest into its stock of assets acquired under its quantitative easing programme.

The Bank buys government bonds to help support the economy, but all bonds have an expiration date and by reinvesting such bonds the Bank maintains the size of its balance sheet.

At a Bank Rate of 1.0% the Bank will actively sell purchased assets.

"Markets are now discounting an increase to 1% next year, a level that would be synonymous not just with halting reinvestments but also with selling of Gilts and decreasing the central bank’s
security holdings," says Broux.

The market is currently expecting the Bank Rate to be at 1.0% by the end of next year, but given the stated desire to whittle down its balance sheet at this point it might seem the market is getting ahead of itself.

A repricing of these expectations presents a significant downside risk to Sterling at present (the other being a major stock market selloff).

"We are not expecting the BoE to raise rates in the coming months and see scope for GBP to edge lower on disappointment," says Jane Foley, Senior FX Strategist at Rabobank.