The British Pound holds recent gains near 20-month highs against the Euro and has reached a new one-month high against the Dollar on Tuesday amidst expectations for higher interest rates at the Bank of England.

But there is no shortage of warnings that the Bank of England's communicated desire to return interest rates to pre-crisis levels will prove to be a mistake.

In the view of critics, higher UK interest rates will slow growth down further and contribute to an environment of rising inflation and stagnant growth, which is unsupportive of the Pound.

"Fading Sterling strength on a BOE hike sounds like a good tentative idea in our view," says Anders Eklöf, a foreign exchange strategist at Swedbank.

"Sterling is unlikely to get lasting support from the BOE raising rates because of supply constraints and already tight labour markets," says Eklöf. 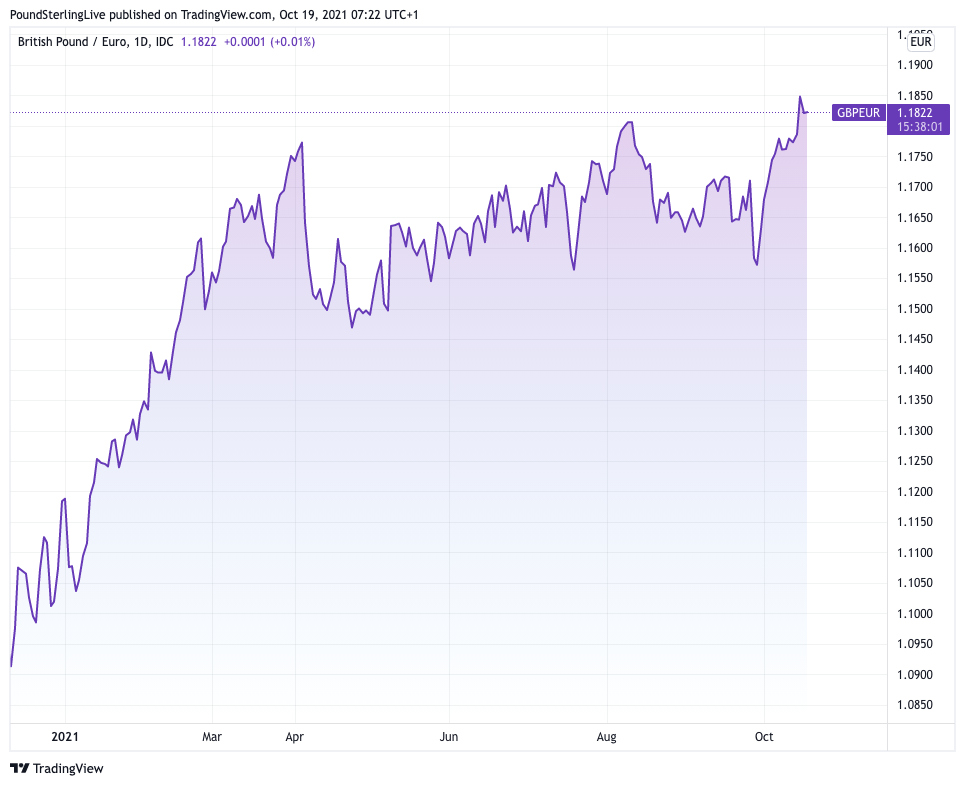 Above: GBP/EUR showing performance through 2021.

"The big question hanging over the pound’s value is whether a potential interest rate hike by the Bank of England (BoE) in the short term will have to be reversed further out due to its possible negative impact on the economic recovery," says George Vessey at Western Union Business Solutions.

The calls come amidst growing speculation that a rate hike at the Bank of England is likely as soon as November which would mean the UK sees higher rates far earlier than the likes of the Eurozone and U.S.

This is typically a supportive development for the Pound against the likes of Dollar and Euro and the recent advance by the UK currency suggests that this interplay between rate expectations and a stronger currency is valid:

Money market pricing now shows an 88% chance of a 15 bps rate increase on Nov 4, up from 50% ahead of the weekend. 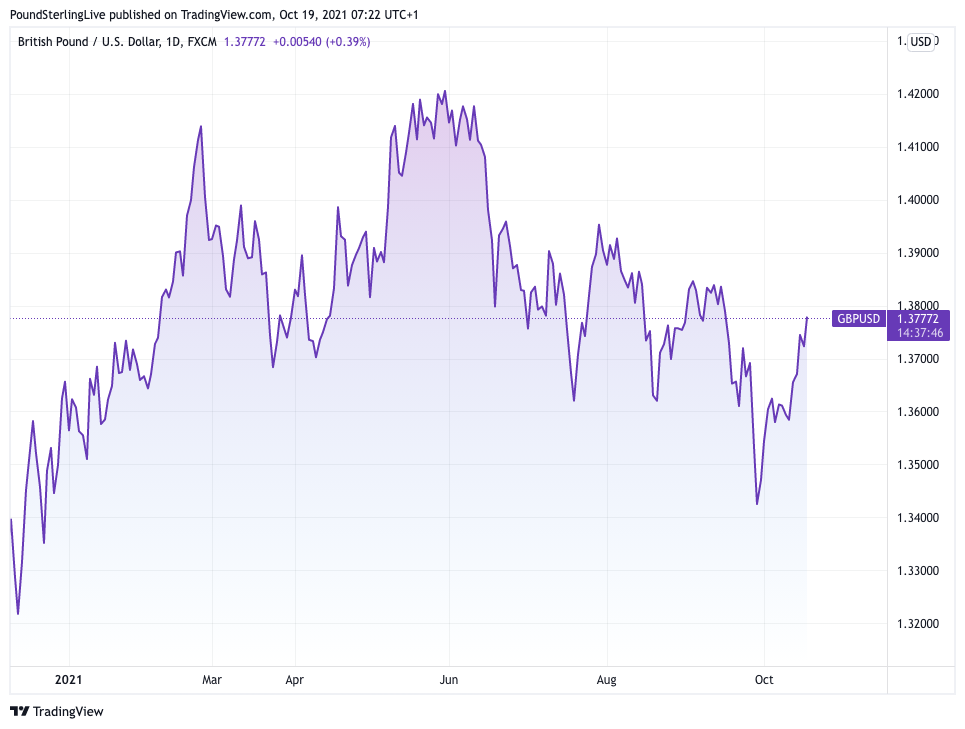 He told BBC Radio 4 that such a move is "foolish" as price rises coming through the system now are almost certainly "terribly temporary".

Interest rates are currently at an historic low of 0.1% but economists warn inflation could be on course to peak at 6.0%, which would prove ruinous in itself.

The Bank of England therefore feels it has to be seen to be acting on inflation.

Another former MPC member Andrew Sentance was however scathing of Blanchflower's view, saying: "How can we take Danny Blanchflower seriously? U.K. inflation is heading to 6 percent and he urges that interest rates are kept at a record low of 0.1 percent. He has no understanding of monetary policy."

Regardless of the debate, CIBC Capital Markets says the market is now well priced for hikes in the coming meetings.

"We would view the degree of pricing for the immediate meeting as looking increasingly mispriced, especially should retail sales and flash PMI undershoot expectations, implying that BoE growth targets will be missed," says Stretch.

He says Bailey does not in fact commit to having to act on interest rates, as per the popular interpretation of his recent comments.

Bailey in fact attaches conditions: notably, that they will act only if they see risks to medium-term inflation and inflation expectations.

"Very much not clear if the MPC thinks those risks already warrant hiking," says Tombs.

"Markets now see a 70% chance of the MPC hiking Bank Rate next month, up from 33% last week. This is ludicrous, given the 'high option value' the MPC sees in waiting until Dec., when key labour market data will be available. Risks to market rates all to the downside now," says Tombs.

A move lower in rate hike expectations i.e. if that 70% chance slides, could imply a retreat by the Pound.

"But the rapid succession of rate hikes being priced by investors looks too extreme, not least because any tightening will also involve reducing the size of the BoE's balance sheet. At most, we expect two rate hikes by the end of 2022," says Smith.

Again, a pricing out of recent rate hike assumptions could weigh on the Pound.

"We reiterate our warning that UK money markets have gone ahead of themselves discounting an aggressive BoE tightening cycle to start soon, as any reversal could in turn weigh on the GBP," says Valentin Marinov, Head of G10 FX Strategy at Crédit Agricole.

However we note that there are some contradictions to be cautious of: if rate hikes constitute an anti-growth policy mistake, as some economists imply, then surely pricing out these rate hikes could support the Pound?

Or is the traditional relationship of higher interest rates = a stronger currency still intact whereby pricing out these expectations makes for a weaker currency?

Shahab Jalinoos, Head of FX Strategy at Credit Suisse reflects on this conundrum, saying there exists "a popular notion in the market that GBP has to fall whatever happens".

"Either because the BoE ends up more dovish than the market is pricing in, or because the BoE delivers early rate hikes to subdue inflation and ends up making a “policy mistake” by hiking into a weakening growth outlook," says Jalinoos in a note out October 13.

There is indeed a plethora of viewpoints to contend with regarding the Pound and Bank of England policy at present and it seems that certainty would only be restored by the nature of upcoming data.

If Friday's PMI data are stronger than expected then the traditional relationship whereby rising rate hike expectations lends itself to a stronger currency would win out.

Also look to November and December's employment data releases as these would give a clear indication as to whether the ending of the government's jobs support scheme has in fact lead to a sharp jump in unemployment.

Therefore, the ultimate source of support or disappointment for Sterling still remains the economic recovery from the Covid shock.