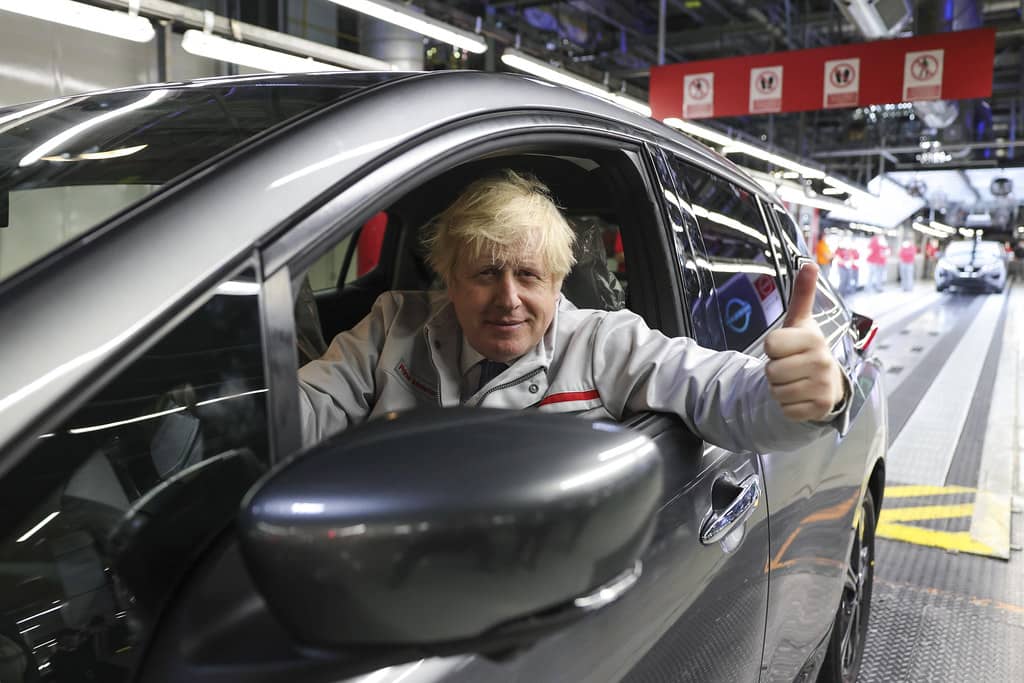 Above: Prime Minister Boris Johnson. An investment announcement from Nissan shows how post-Brexit 'onshoring' is underway. Picture by Andrew Parsons / No 10 Downing Street.

The UK's shifting trade relationship with the EU and the rest of the world could prove supportive for the British Pound according to new research from BMO Capital Markets, who say they continue to favour the Pound over the Euro from a strategic perspective.

Stephen Gallo, European Head of FX Strategy at BMO Capital Markets says new data suggests to hims a "geographical shift underway", and this underpins his view that the Pound is a buy against the Euro on weakness.

The call on the Pound-to-Euro exchange rate is a response to this week's release by the ONS of Balance of Payments data for the first quarter, which showed the UK's current account deficit had shrunk which is on balance a fundamentally supportive development for the Pound.

The Balance of Payments (BoP) is effectively the UK's bank balance with the rest of the world; an important element of this dynamic is the BoP's current account which traditionally sits in a deficit largely owing to the UK's need to import goods.

The ONS data showed the UK's current account deficit with the EU declined from a peak of £22BN in the first quarter of 2019 to just £7BN.

Gallo notes a key driver of the decline being the 33% drop in goods and services imports from the EU. 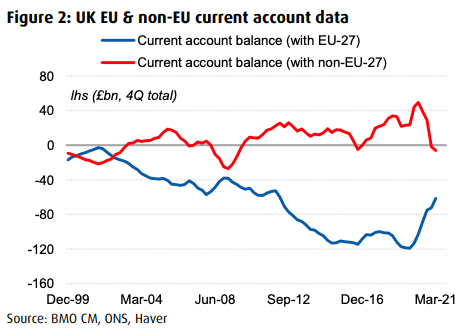 "A portion of those sharp declines reflects noise related to COVID-19. For instance, the steep decline in UK services imports from the EU since 2019 (roughly £12bn) is related to the fall in outbound tourism from the UK," says Gallo.

"But the 13% gap between the two figures is still intriguing, and it may be related to permanent shifts in the geographic flow of trade, particularly because the shifts are visible in merchandise trade too," he adds.

The call comes as Nissan announces a major new investment in their Sunderland plant that will see 6000 jobs created.

The developments will see the creation of a new 'giga factory' to manufacture batteries and is said to represent an effort by Nissan to 'onshore' as much of the components involved in manufacturing their vehicles as possible.

This is partly because from 2024 the level of UK-made components in cars manufactured in the UK is required to start increasing, in line with the terms of the UK's trade deal with the EU.

This suggests that in some instances manufacturing processes that might have occurred in Europe or overseas in the past might be required to relocate to Britain, boosting domestic manufacturing capacity.

"We think there is a reorientation underway which may ultimately benefit the GBP, from angles related to the BoP and domestic economic growth," says Gallo.

With Covid restrictions easing data suggests that exports from the UK to the rest of the world has recovered more quickly than those to the EU, growing by 1.0% in the first quarter compared with a 15% drop to the EU. 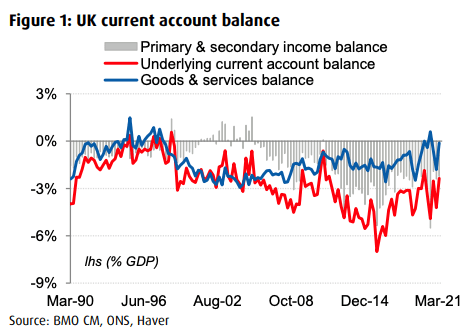 "The moderation in the UK's overall trade deficit (above) may also be an early indication that membership of the EU's customs union was a suboptimal position for the UK, though more data are needed to firmly draw a conclusion," says Gallo.

The current account is however not just a function of the trade in goods and services: capital flows linked to investment are also significant.

And it is here that Gallo sees further interesting developments that might have a bearing on where the Pound trades over coming months.

Looking at the primary income balance BMO Capital observe the EU accounts for about 40% of the entire stock of UK financial assets held abroad, but the UK's non-EU financial assets have generated substantially more income (credits) for UK investors over the last decade.

"It's too soon to tell what the post-Brexit composition of investment into the UK will look like. But we anticipate that the government's plans to unleash long-term capital through reform of the pension and insurance system will assist with a shift in the composition of financial account flows: away from loans and deposits towards 'stickier' forms of capital (i.e. portfolio investment and FDI)," says Gallo.

In the 2021 Budget delivered in March, Chancellor of the Exchequer Rishi Sunak announced a consultation into investment rules for pension schemes to support the economy in the post-Covid era.

According to the budget documents, this consultation will analyse whether certain costs within the charge cap, set at 0.75%, affect pension schemes' ability to invest in a broader range of assets.

The goal is to ensure that pensions schemes are not discouraged from such investments and are able to offer the "highest possible return for savers".

"It seems to us as if the macro environment is still creating headwinds for EURGBP topside, and we'd continue to favor selling rallies in this pair," says Gallo.

An optimistic stance on the UK's trade and payments dynamics are however not ubiquitous amongst economists, with Samuel Tombs at Pantheon Macroeconomics saying the country's current account deficit will balloon over coming months.

Tombs says the current deficit will widen significantly and probably will exceed, as a share of GDP, last year’s 3.5% average.

"For a start, the U.K.’s demand for imports is relatively insensitive to price rises—note that there was no import substitution after sterling’s big depreciation in 2016—suggesting that higher prices for manufactured goods and raw materials will boost the value of imports," says Tombs.

With regards to the UK's export position, Tombs says new barriers to trade with EU countries —especially for services — will impede the recovery in exports.

On this basis the current account deficit would remain a source of downside for Sterling, provided capital inflows to the UK dry up.