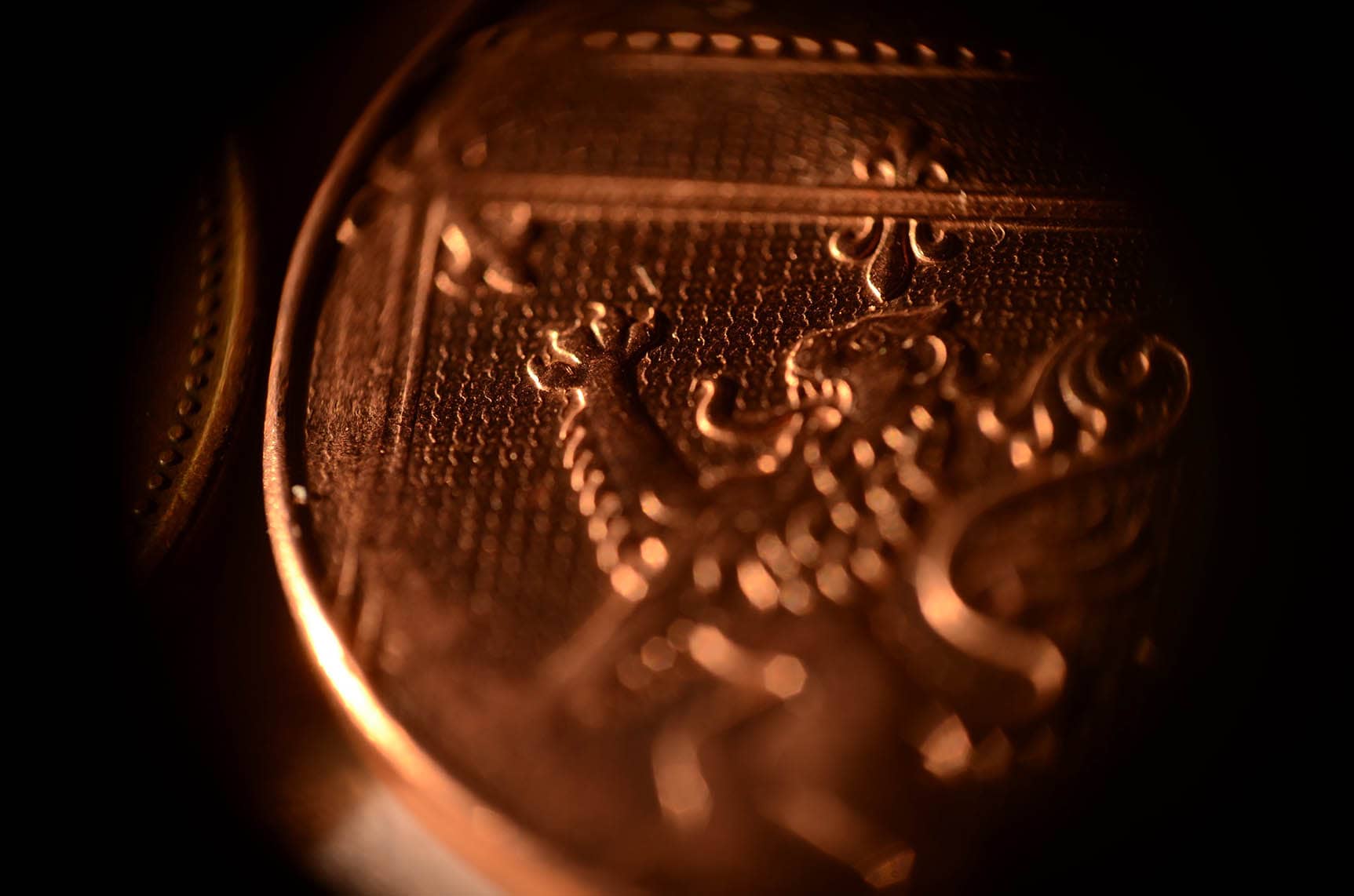 The Pound-to-Euro exchange rate reached a new two-year high last week and may be likely to establish a more durable foothold above 1.17 over the coming days as divergence between the UK and Eurozone economies remains top of mind among investors.

Sterling ended the week higher against all major counterparts except the U.S. Dollar and Norwegian Krone with the Pound-to-Euro rate having traded as high as 1.1719 in the closing stages of the period as diverging prospects of the UK and Eurozone economies became more evident.

With new or prolonged 'lockdown' announced for major European economies last week just as the UK prepares to begin reopening, the widening gap between short-term prospects of UK and European economies has become all but impossible to overlook for investors.

Some 29 million adults had received the first shot of a coronavirus vaccine on Friday, which is almost half the entire population and includes all adults who're categorised as most vulnerable to the coronavirus, keeping the country on track to have offered all adults a vaccine by July.

Meanwhile, the controversial topic of vaccine export restrictions featured heavily on the agenda of Thursday and Friday's European Council meeting as the bloc scrambles to ramp up its own lacklustre programme, which has set the Eurozone recovery back by months compared with the UK, U.S. and others.

"Concerns about a worsening virus situation and the slower vaccination progresses in the eurozone may widen the UK-EU gap in terms of recovery expectations and we could see EUR/GBP test the key 0.8500 support in the coming days," says Petr Krpata, chief EMEA strategist for currencies and bonds at ING. "Much focus will remain on the virus situation in Europe and whether lockdowns can slow rising case numbers and also whether the slow pace of vaccinations can finally reach exit speed."

Sterling would rise to 1.1764 if ING's Krpata is right about EUR/GBP slipping to 0.85 this week as investors respond to contrasting economic outlooks. 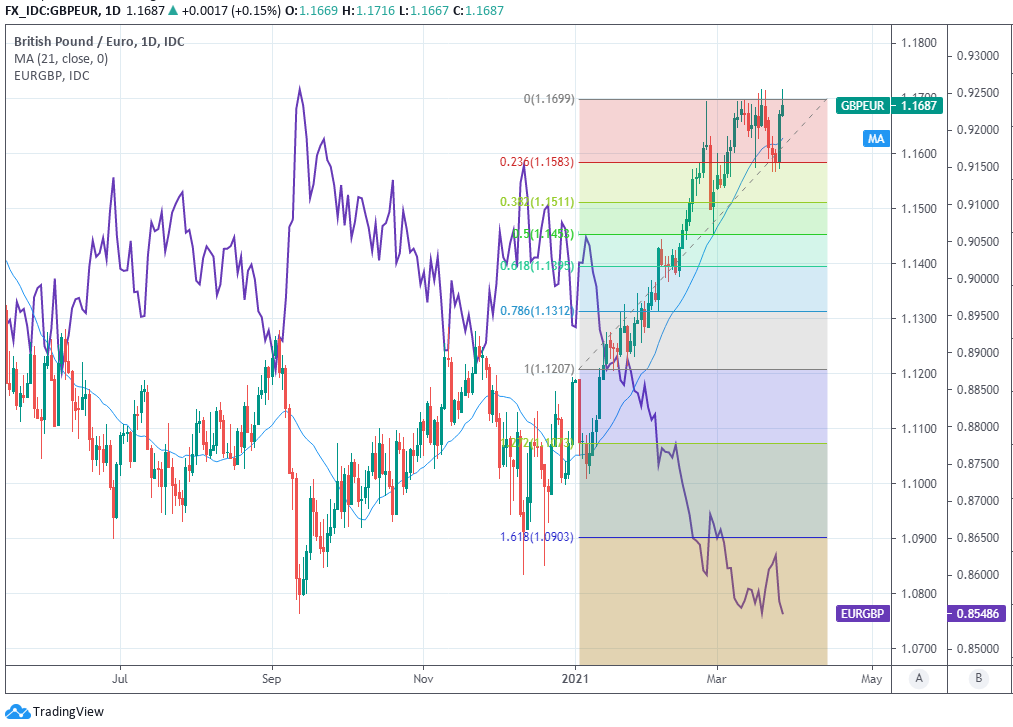 "In contrast to other major European countries, the number of new weekly COVID cases has continued to fall since mid-February (86k to 39k) albeit at a slower pace in more recent weeks. Perhaps more importantly, the number of patients in hospital has continued to fall markedly," says Lee Hardman, a currency analyst at MUFG. "The improving outlook for the UK economy should continue to encourage a stronger GBP in the coming months. April also tends to be a strong month for GBP."

Contrast in economic outlooks has had meaningful consequences already with the European Central Bank (ECB) having brought forward pre-planned purchases of government bonds under its quantitative easing programme to prevent Eurozone yields rising in line with global counterparts. This is just as the Bank of England, Federal Reserve and others signal indifference to the increasing returns offered by UK and U.S. bonds, which reflect investors' optimism about the outlook for interest rates.

"The GBP’s rebound should be enhanced by the efficacy of the UK government’s vaccine roll out program which will boost expectations of a relatively earlier economic normalization in the UK. We continue to feel that the cross can reach 0.83," says Shaun Osborne, chief FX strategist at Scotiabank, tipping a level of EUR/GBP that is equivalent to a Pound-to-Euro rate of 1.20.

The economic calendar is devoid of major market-moving data for the UK and Eurozone with only a somewhat stale final quarter GDP number to focus on for Sterling on Wednesday ahead of March inflation figures, which may go overlooked by the Euro given the 'dovish' stance of the ECB. However, appetite for the Euro may be tested further early on this week by uncertainty about the outlook for the EU's coronavirus recovery fund following a challenge to its legality in the German Constitutional Court.

"The German Constitutional Court (GCC) has prohibited the President from issuing the ratification law on the so-called EU own resources decision until it has decided on an interim injunction," says Jorg Kramer, chief economist at Commerzbank. "We consider it unlikely that the GCC will ultimately declare the ratification law unconstitutional. It is true that Article 17 of the EU Financial Regulation stipulates that the EU "may not raise loans within the framework of the budget". But without Germany, the EU recovery fund could de facto not get off the ground, which could trigger market turbulence."

Mismatched economic prospects and divergence in outlooks for central bank policy are an incentive for investors to hold Sterling instead of the Euro and explain the powerful uptrend evident in the Pound-to-Euro rate, and downtrend in EUR/GBP. A lower EUR/GBP is one of the most effective conduits for Euro depreciation in the trade-weighted sense, which is why the trend in Sterling could have legs to continue despite how far it's come already in 2021. 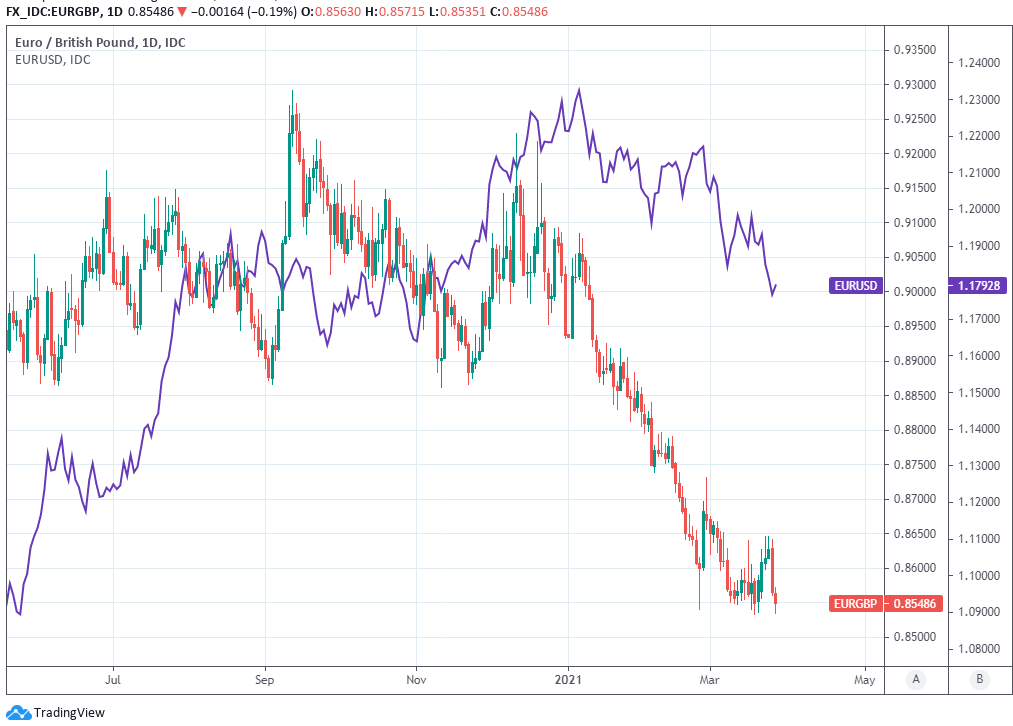 For the Euro to depreciate in an economically meaniingful sense it has to fall against either the Dollar, Sterling or Chinese Yuan - currencies of Europe's largest trade partners -  although there's good reason for thinking this depreciation would be most likely to come against the Pound. Partly because the Yuan has softened this year after a strong 2020 rally, limiting the extent to which EUR/CNH can fall, while the myriad needs of other central banks provide reason for expecting Euro-Dollar downside to be limited.

Other European currencies, and especially those with economies that are likely to be held back most by the slow vaccine rollout, will also need to depreciate in trade-weighted terms but are likely to find this more difficult with every decline in EUR/USD. The Eurozone's size and significance to other economies mean that many currencies will need to depreciate against the Euro, but the structure of the currency market makes this more difficult with every EUR/USD decline.

EUR/USD declines leave other currencies in a position where they have to fall even more against the U.S. Dollar in order to depreciate against the Euro themselves, which  makes for extreme U.S. Dollar strength and a somewhat inefficient evolution of price action on the part of the market. This is why in other words the most efficient route for the Euro to weaken in the sense that matters most economically is through a higher GBP/EUR rate, although it's not just fundamentals arguing for further upside in Sterling.

"EURGBP has been unable to clear key near -term resistance and the subsequent sharp sell -off quickly turns the spotlight back to key Fibonacci supports," says David Sneddon, head of technical analysis at Credit Suisse. "With the EUR itself now seen completing a large top we continue to look for an eventual clear break below here." 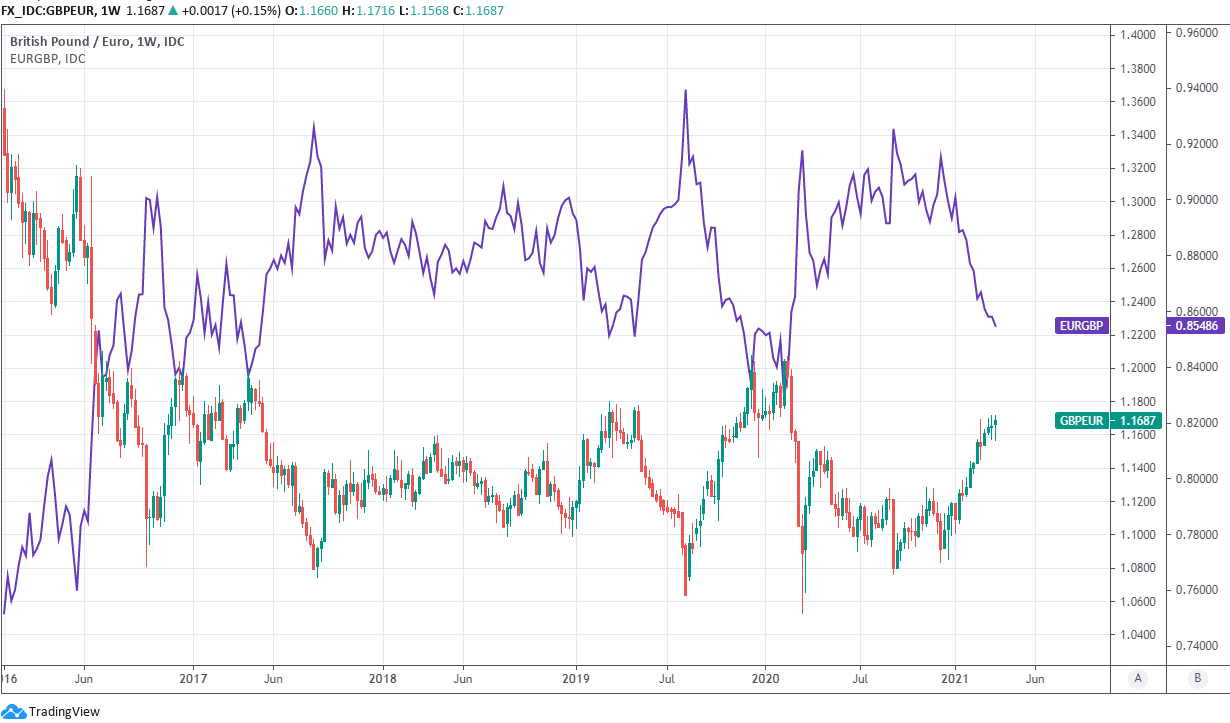 Above: Pound-to-Euro rate shown at weekly intervals with EUR/GBP (purple).