The Pound-Euro exchange rate edged further away from a nine-month peak Thursday but could shift into a higher range soon after if Sterling's recently competitive appeal to investors is left unscathed by an imminent Bank of England (BoE) interest rate decision.

Sterling relinquished its position at the top of the major currency pile for 2021 when yielding to the U.S. and New Zealand Dollars mid-week.

But it's kept the upper hand over the Euro and may continue to if the BoE vindicates investors at 12:00 noon for becoming less downbeat or 'dovish' last month in their outlooks for the economy and Bank Rate.

"Pound weakness likely reflects some nervousness ahead of today’s BoE meeting which is likely to prove important for the near-term performance," says Lee Hardman, a currency analyst at MUFG. "We expect the BoE to look though short-term weakness and display more confidence in the outlook for a stronger economic recovery beyond."

Economists widely expect Bank Rate to remain at 0.10% and the overall size of the BoE's recently-increased £895bn kitty for quantitative easing unchanged, meaning that Sterling may be most sensitive to any remarks on negative interest rates for their impact on investors' expectations for Bank Rate.

Considerations driving the decision on negative rates are as much technical as economic, although February's Bank Rate and QE outcome will reflect present pains of an economy mired in 'lockdown,' weighed against recovery prospects that are burnished by the UK's lead in the vaccination race. 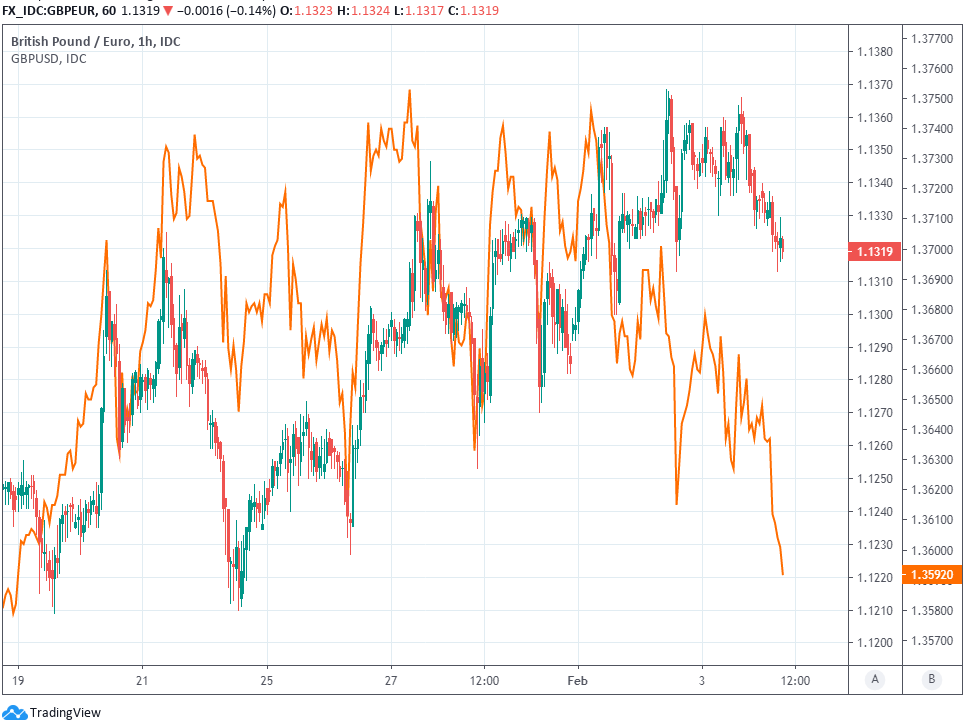 Above: Pound-to-Euro rate at hourly intervals with GBP/USD (orange).

The BoE previously said to expect an update in February on its investigation into the feasibility of pushing some borrowing costs below zero percent, although investors have viewed the policy as a less likely risk since Governor Andrew Bailey indicated in January that he isn't keen on the idea.

"I hope that they throw the idea of negative rates into the long grass," says Kit Juckes, chief FX strategist at Societe Generale. "From an economic view, I question how much pushing a currency that is close to historic lows in real terms can help. From an FX forecasting view, I think it's just bad for sterling!"

The Pound may be vulnerable to losses in the event the BoE finds in favour of negative rates, while a sidelining of the idea could prompt a renewed move higher as investors reconsider a currently-lingering market expectation of a further cut to the base rate by summer that takes it to to 0%.

"We think that, as in August last year, the findings will predominantly highlight the potential drawbacks and challenges of such a policy. This may dampen any market expectations of a near-term rate cut," says Stefan Koopman, a senior markets economist at Rabobank. "We note that the optimism that is currently embedded in the MPC forecasts doesn’t at all call for negative rates."

A repricing would be a tailwind for Sterling just as Europe's single currency comes under scrutiny from the European Central Bank (ECB), and amid a slow start on vaccinations that risks leaving the continent months behind the UK and U.S. in what is a double-barreled argument for a higher Pound-Euro rate. 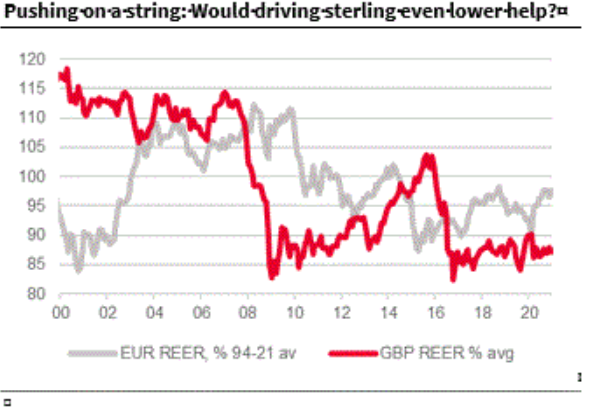 Above: real-effective-exchange-rates for Sterling (red) and (Euro).  Source: Societe Generale.

The Pound would trade as high as 1.1450 if the main Sterling rate GBP/USD recovers to its earlier high of 1.3760 while EUR/USD struggles at Thursday's 1.20. GBP/EUR always closely reflects relative price action in the latter two, for reasons relating to the plumbing and pipework of the market.

"The UK 1‑year OIS curve has fully priced‑in 10bps of policy rate cuts.Our base case is for the BoE to keep rates on hold over the forecast horizon. Bottom line: risk is GBP/USD edges up to 1.4000 as UK rate expectations adjust," says Elias Haddad, a strategist at Commonwealth Bank of Australia, in a Tuesday note.

The Pound has spent only five months trading above 1.15 against the Euro in nearly five years since the Brexit referendum, but would rise to around 1.1666 if CBA's Haddad is right about GBP/USD having a shot at rising to 1.40 if there are doubts about the odds of a further cut to Bank Rate.

"Although the BoE may formally lower its estimate of the lower bound to below zero, we don't expect policymakers to hint that negative rates are imminent (particularly if the UK economy is set to start recovering from 2Q onwards), in turn having a limited impact on GBP today," says Petr Krpata, chief EMEA strategist for currencies and interest rates at ING. "We expect GBP to reap the benefits of a faster vaccination rollout vs the EZ and look for EUR/GBP to reach 0.85 this year [GBP/EUR: 1.1764]."

Sterling has had a moment in the proverbial sun lately as a leading coronavirus vaccine rollout provides it with a shot at herd immunity as soon as mid-year. 10mn people received a first dose in a two-shot vaccination treatment during the month to February 02, or around 15% of the population.

That would be a few months ahead of other countries and a recipe for outperformance by Sterling if it facilitates an earlier easing of restrictions than in others. The elevation and improved outlook for GBP/EUR is as much a reflection of events in Europe as it is improved UK prospects.

"EURUSD is clearly mulling whether to have a look below the 1.2000 level here, the psychological pivot point for this trend," says John Hardy, head of FX strategy at Saxo Bank. "On the flip-side – a quick sharp rally back above perhaps 1.2100 would indicate that this has been a false downside break."

The Euro has fallen steadily since Christine Lagarde told Reuters last month that the European Central Bank (ECB) is "extremely attentive" to EUR/USD. Other factors including a sluggish vaccine rollout were also a burden in January but the timing of the ECB's comments, relative to the directional turns in key exchange rates, is notable. 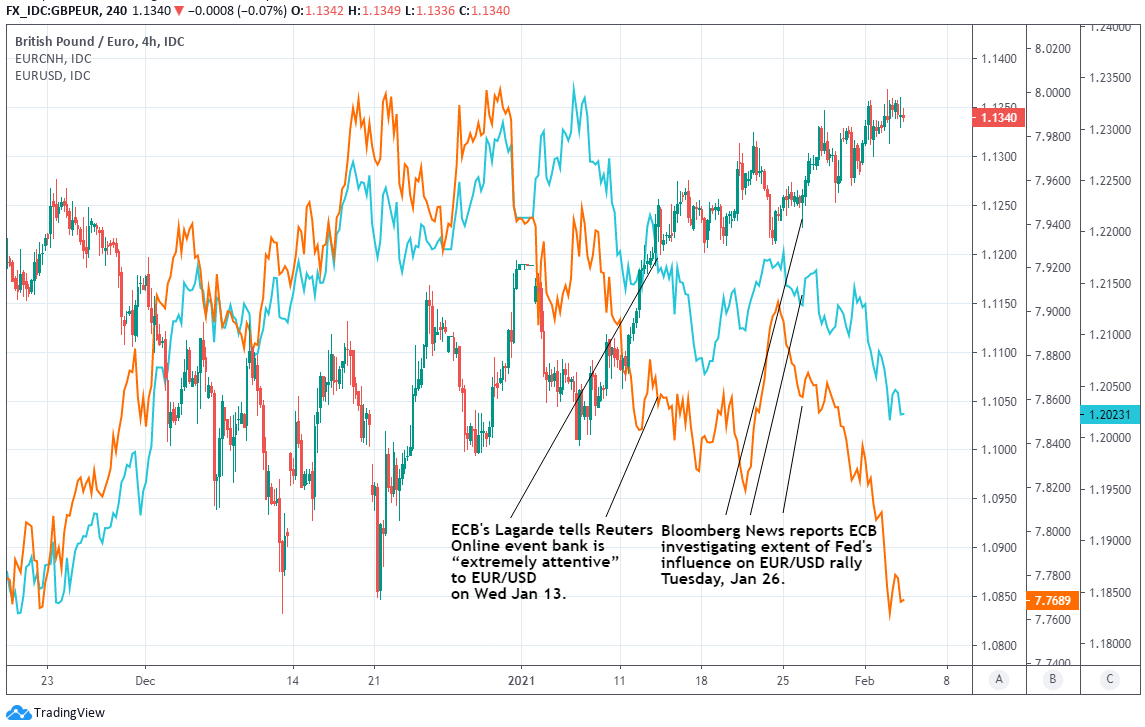 ECB objections to EUR/USD gains threaten to prompt a sluggish performance from the Euro in the short-term after last year's price action lifted the trade-weighted single currency at a pace that could reduce import prices and inflation rates, which have long been too low for the ECB.

This also speaks in favour of further upside for the Pound-to-Euro rate, although a GBP/EUR move above 1.1376 would open the door to a higher range which includes levels that have proven rare in the post-referendum era.

The 1.1376 mark is the location of the 55-month moving-average, a sustained close above which would flag scope for 1.1532 in Sterling and 0.8671 for EUR/GBP, according to technical analysis from Commerzbank.

"EUR/GBP has sold off towards and is attempting to stabilise at the 55 month ma," says Karen Jones, head of technical analysis for currencies, commodities and bonds. "Below .8790 would target the .8671 April low"

Jones is a buyer of EUR/GBP and seller of Pound-Euro this week but looks for the latter to advance as far as 1.1679 on a longer one-to-three month horizon. 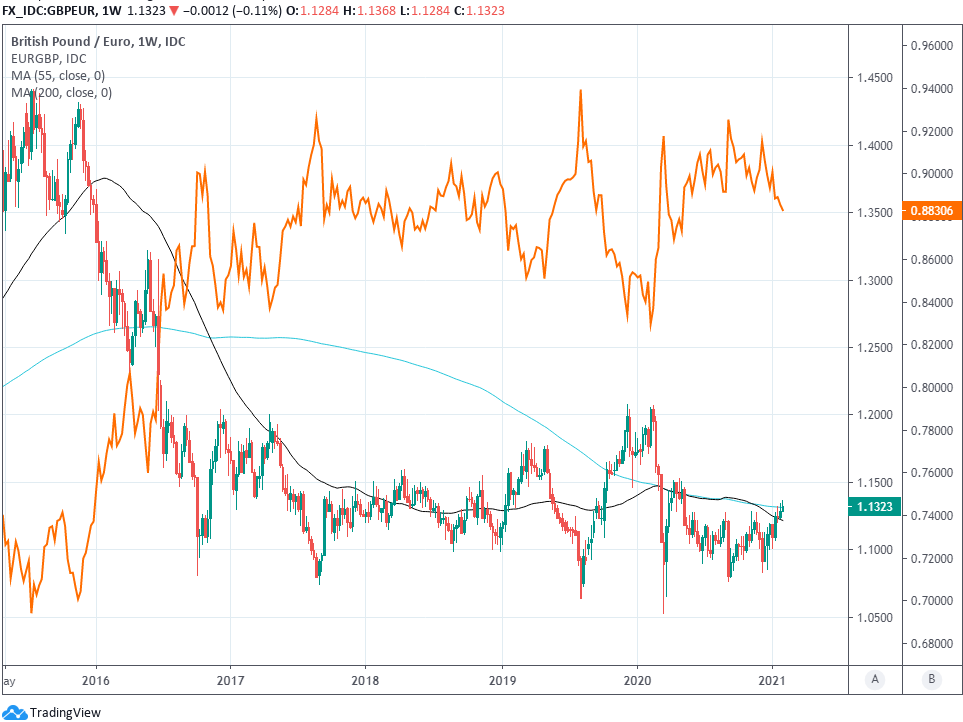