The Pound-to-Euro exchange rate attempted to rally above an important resistance level on the charts last week but was scuppered by Euro strength and last minute weakness in Sterling, which may now have condemned the pair to a period of consolidation within a narrow range over the coming days.

Europe's single currency was heartened when President Christine Lagarde said it might not be necessary for the bank to use all of the money allocated to its pandemic-related quantitative easing programme and expressed little concern about recent movements in exchange rates.

Investors perceived the ECB's language and stance to be less 'dovish' than anticipated, with the resulting Euro gains dragging the Pound-to-Euro rate back below 1.13 only for Friday's sell-off in Sterling to then take it closer to 1.12.

The Euro's subsequent outperformance came despite widespread losses for risk assets and currencies, which compounded the effect of softening investor appetite for Sterling and could mean the 1.13 level now acts as a short-term ceiling for the Pound-to-Euro rate.

"The Elliott wave count on the daily suggests this is the end of the move and the 13 count on the 240 minute chart implies near term strength, we will therefore buy the dip," says Karen Jones, head of technical analysis for currencies, commodities and bonds at Commerzbank, referring to EUR/GBP.

Sterling's failed break above 1.13 has left the charts arguing for a retracement lower and has prompted Jones and the Commerzbank team to advocate selling the Pound  around 1.1260, although they also note that in the absence of a decisive break beneath 1.12, Sterling is likely to retain an upward bias. 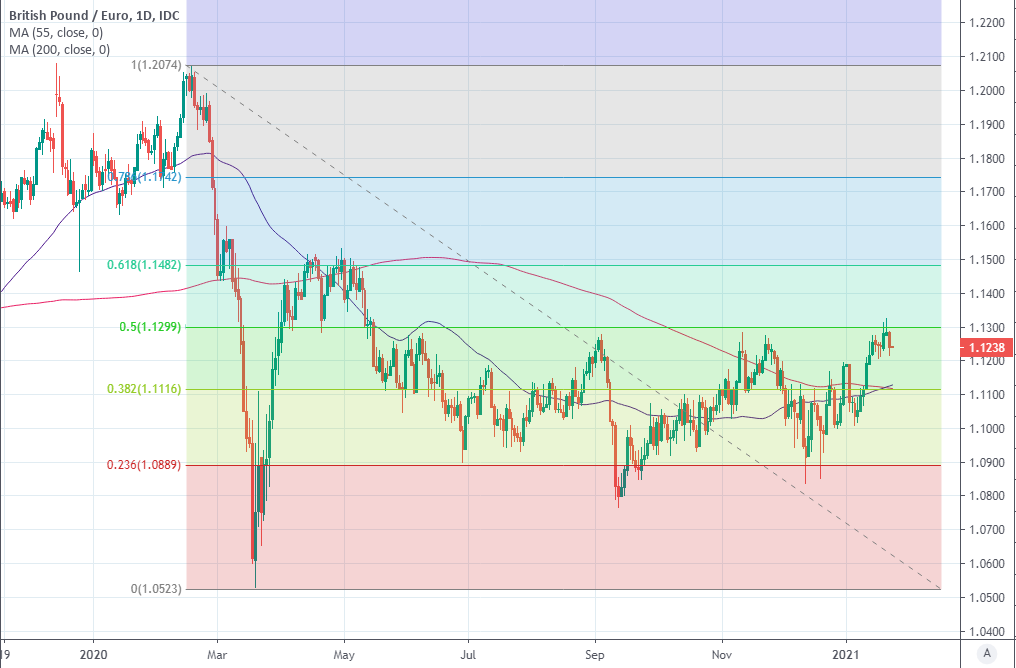 However, Jones has flagged that should the latter level give way, Sterling could potentially fall as far as 1.1005 in the short-term.

"The GBP is now testing key resistance levels against both the EUR and USD which if broken could lead to further near-term gains," says Lee Hardman, currency analyst at MUFG. "We believe that a lot of good news has been priced into the GBP recently. The GBP has derived support from the move higher in short-term UK rates, but they are unlikely to continue to move much higher in the near-term. It makes us cautious over chasing further near-term GBP gains."

The Pound had enjoyed a period of outperformance after Bank of England Governor Andrew Bailey allayed market fears about an imminent implementation of negative interest rates, although last week's PMI figures and earlier retail sales data took the wind out of its sails and some analysts say the rally has now run its course.

"The material miss in the UK Services PMI reversed the prior GBP gains. While the majority of manufactures reported a worse supplier performance (linked to Brexit) the PMI miss does not tell us much about the GDP figures (as the relationship between PMIs and GDP is now weak), suggesting there's no long-lasting negative impact on GBP," says Petr Krpata, chief EMEA strategist for currencies and bonds at ING. "The focus next week will be on the UK employment numbers. The jobless rate is set to increase further (towards 6% in November), but the impact on GBP should be limited."

With last week's data bringing the fragile state of the UK economy to the top of mind for investors, job data for November could draw more scrutiny than otherwise on Tuesday at 07:00. The data will provide insight into damage done by the second 'lockdown' which is pertinent in light of January's third shutdown.

On the opposite side of the GBP/EUR equation, Europe's single currency may listen closely to Christine Lagarde's Monday speeches to the Institute for Law and Finance and then an online Davos World Economic Forum, which are scheduled for 08:45 and 16:15 respectively.

The Euro could be sensitive to any comments that provide clarity on the circumstances in which the bank might not use all of the €1.85 trillion it has allocated to coronavirus-inspired quantitative easing as well as to any fresh remarks on Eurozone exchange rates. 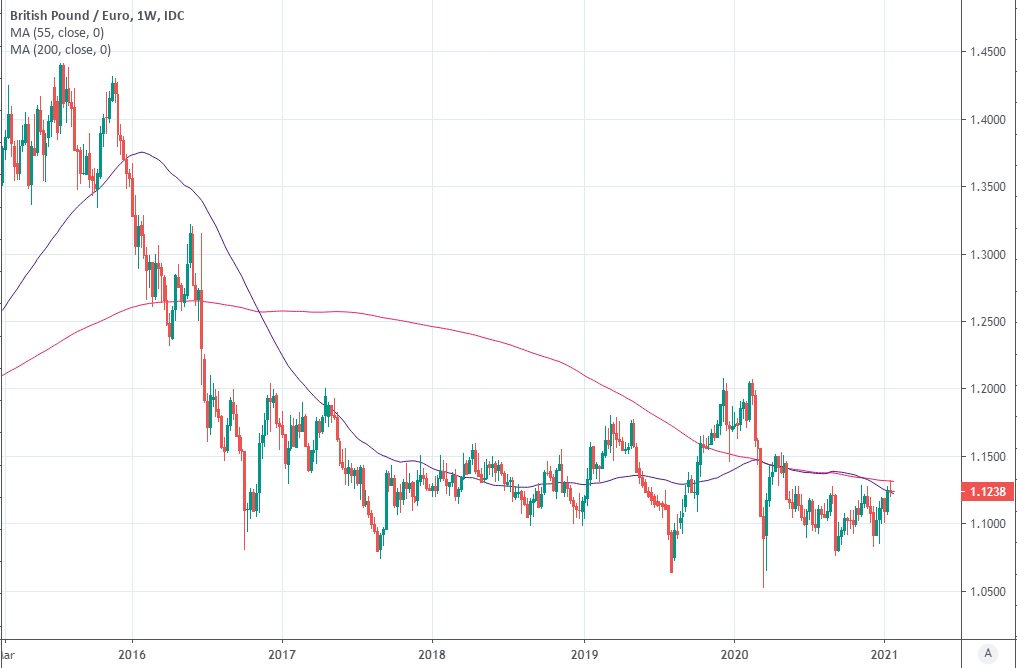 Above: Pound-to-Euro rate shown at weekly intervals with 55 & 200-week moving-averages.

"The combined effect of the December and January data will probably slow the pace at which longer-term investors rebuild their GBP exposures," says Stephen Gallo, European head of FX strategy at BMO Capital Markets.

With Sterling losing momentum in the wake of a strong earlier rally against the Euro just as data paint a gloomy picture of the current UK economic backdrop the stage may be set for a period consolidation by the Pound-to-Euro rate.

However, the bigger picture remains that the UK is leading Europe in its coronavirus vaccination effort and may have its population fully vaccinated some time before European countries do. This could give the economy a headstart in its recovery from the latest round of restrictions on social contact and activity.

A total of 5.8 million had received their first dose of a vaccine in the UK by Friday, almost 10% of the population, while Europe's rollout was hit by further setback this time related to deliveries of the Astrazeneca vaccine.

GBP/EUR is also further supported in its medium-term outlook by a combination of European Central Bank concerns about a strong Euro and the elevated level of many other major Euro exchange rates.

The bank said little about this in its policy announcement last week, although the reality is that the further EUR/USD rises during the months ahead, the greater the upward pressure will be on trade-weighted measures of the Euro.

A rising Pound-to-Euro rate is one of the few mechanisms that can neutralise upward pressure on the trade-weighted Euro even as EUR/USD rises in line with the consensus market view for 2021. 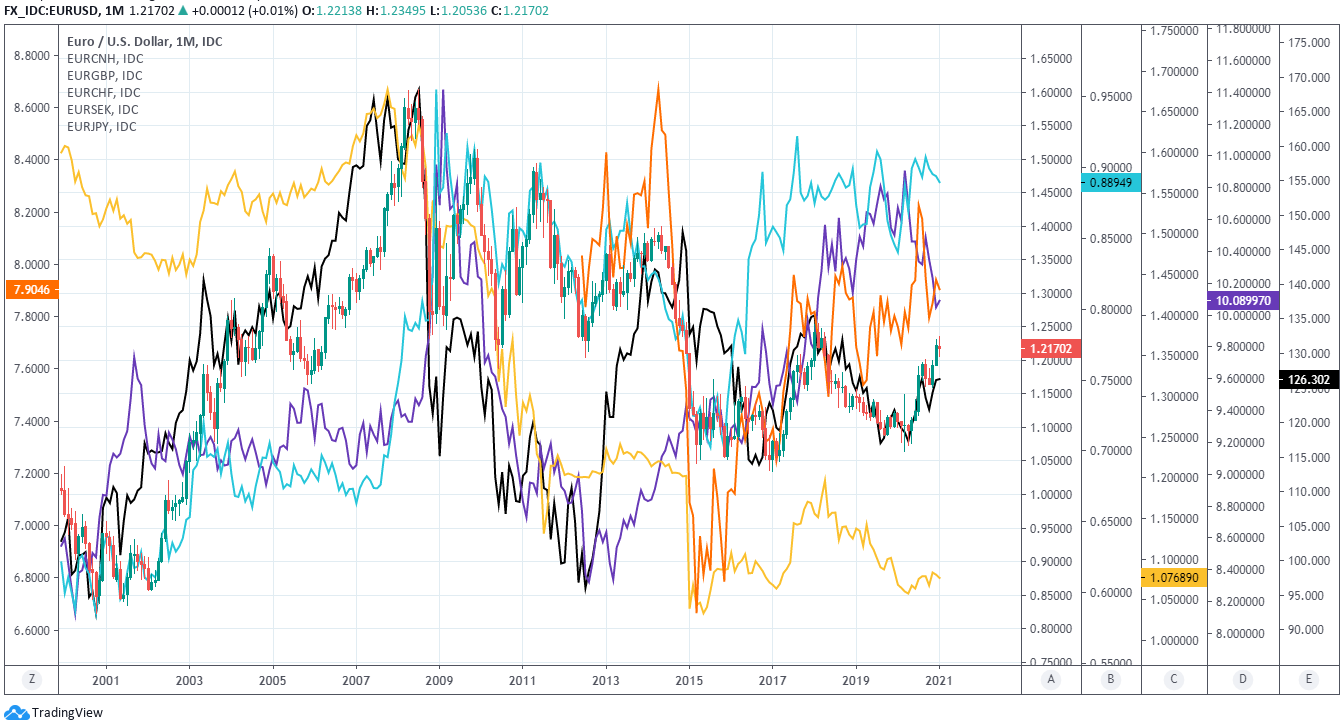