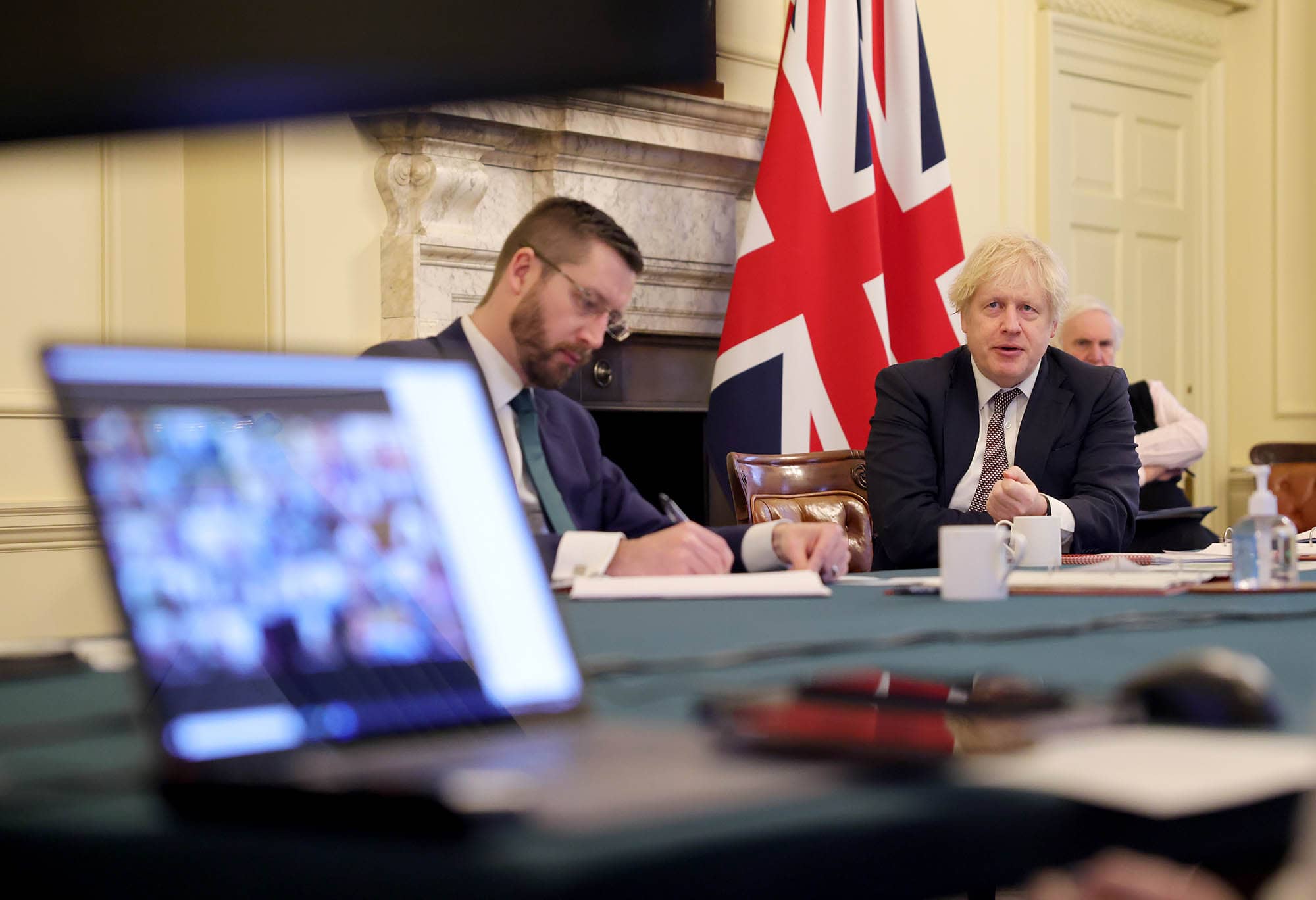 Above: Prime Minister Boris Johnson want to vaccinate the most vulnerable in society by mid-February. Picture by Pippa Fowles / No 10 Downing Street.

Foreign exchange traders at Citi - the world's largest dealer of foreign exchange - say they retain a bullish stance on Pound Sterling for the medium-term.

The interest of longer-term buyers hints at real money demand for UK assets, a development that will some analysts are saying is likely linked to the closing of an EU-UK trade deal at the end of December.

The observations suggest the recent advance in Sterling exchange rates could be more durable than some of the rallies seen over the past year, leading to questions as to whether the bottom in some major GBP pairs is now in.

"Sterling is on a roll – is this another head fake or are we set for a further solid surge? Yes, the BoE’s Bailey steering guidance away from negative rates helps, but the strength must also be based on real inbound investment flows as well," says John Hardy, Head of FX Strategy at Saxo Bank. 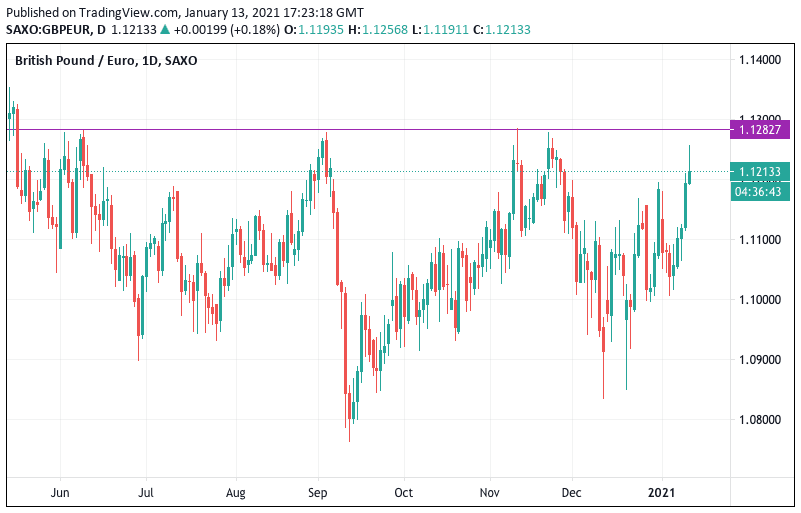 Above: GBP/EUR is rising to the top of a medium-term range. We will only know if it is in a genuine uptrend if it can at least clear resistance at ~1.1280 (purple horizontal above).

The consensus view amongst foreign exchange commentators and analysts is that Sterling's appreciation this week rests largely with the Bank of England's Governor Andrew Bailey, who on Tuesday indicated cutting interest rates to 0% or below was not likely anytime soon.

The market bid Sterling higher in relief following the comments as investors rowed back on expectations for negative interest rates: 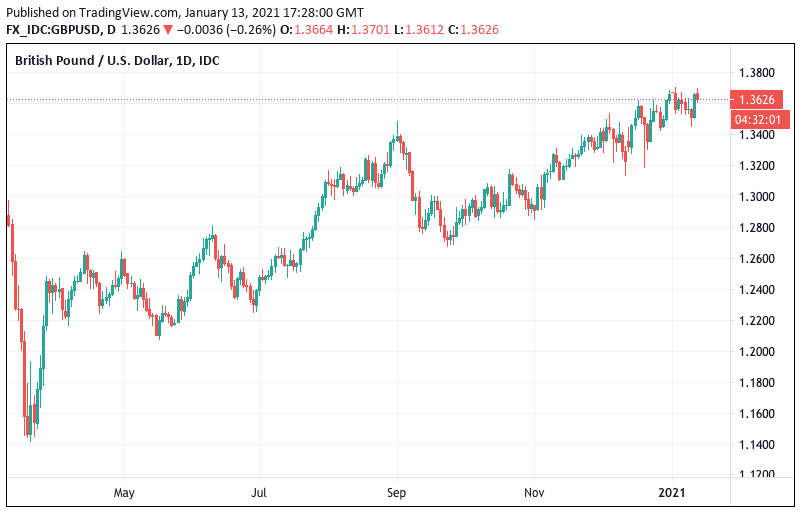 Above: GBP/USD remains in an uptrend.

Bailey told the Scottish Chambers of Commerce there were "lots of issues" with negative interest rates, the merits of which are being debated by members of the Bank's Monetary Policy Committee (MPC).

What the Bank of England does to interest rates matters greatly for Sterling.

"The pound is amongst the most rate sensitive currency amongst its G10 peers," says Kamal Sharma, FX Strategist with Bank of America.

Sharma notes that bond yields in the UK have risen relative to those in other jurisdictions following Bailey's comments, and Pound exchange rates have responded accordingly and gone higher.

"In relative terms, UK rate differentials versus G10 peers (weighted basis) has also widened to its highest levels for the year and have even widened against the USD. For now, we believe this will prove supportive for GBP," says Sharma.

The Bank of England will likely avoid introducing negative interest rates provided the prospects for a durable economic recovery in the first half of 2021 materialise.

Central to this is the vaccination programme, which has accelerated in recent days and could allow the UK to start exiting lockdown from the end oF February onwards.

"To be sure, tracking the vaccinations data will be as important as any metric going forward. The stronger the pace of vaccinations, the faster the recovery can start," says Sanjay Raja, Economist at Deutsche Bank.

Deutsche Bank says Prime Minister Boris Johnson's aim of getting the most vulnerable in society vaccinated by mid-February is however too optimistic, and their expectation is that the UK vaccinates all of its highly vulnerable population (including frontline workers) by the end of March.

"This should allow for some loosening in restrictions by March," says Raja.

The UK will need to vaccinate around 300K people a day if Johnson's target is to b e met. The latest NHS figures show 187,645 doses were delivered on Tuesday-Wednesday in England.

Additional good news for the country comes as a further sizeable drop in positive cases is reported with the country reporting 47,525 new cases on Wednesday, down from last Wednesday's figure of 62,333 meaning the number of positive cases has fallen markedly for three days in succession.

"GBP outperforms as Covid cases start to fall," says Joshua Mahony, Senior Market Analyst at IG, "the UK seemingly turning a corner on the first against this latest Coronavirus wave."

"With new cases finally starting to decline, there is a feeling that the Christmas surge is behind us. The UK vaccination push has already been impressive, and there is room for further optimism given the AstraZeneca rollout," says Mahony.

And there are further reasons for an improvement in sentiment towards the UK economy and financial assets including UK-focussed companies and the Pound.

"As we approach the two-week mark into Brexit, fears of a complete collapse at the border have instead turned into stories of Lorry drivers losing their Ham sandwich. Thus with vaccinations ramping up, Covid-cases turning lower, and Brexit fears subsiding, it comes as no surprise to see the pound outperform of late," says Mahony.