- GBP/EUR near two-month highs as Brexit deadline looms.
- May be vulnerable to disappointment after deal hopes rise.
- Technical analysts differ as other forecasters point higher.

The Pound-to-Euro rate starts the new week near two-month highs ahead of an important Brexit deadline but with trade talks between the two sides still deadlocked, while mixed messages emanate from the charts, the outlook is balanced on a knife edge.

Pound Sterling was the second-best performing major currency behind only the New Zealand Dollar last week after being lifted early on by reports of progress in the development of a coronavirus vaccine, and aided at the last minute by the resignation of an influential government adviser.

Prime Minister Boris Johnson's closest aide Dominic Cummings departed Downing Street on Friday at a crucial time in the Brexit negotiations, in what some analysts interpreted as a positive omen for the Brexit talks ahead this week's EU summit that's thought to be the final deadline for a deal.

"The resignation of PM Johnson’s chief advisor Cummings, seen by many as the mastermind behind the successful Brexit campaign and referendum, should be perceived as GBP positive, particularly in the context of the final stage of the UK-EU trade negotiations," says Petr Krpata, chief EMEA strategist for currencies and bonds at ING. "This should swing the pendulum of probabilities towards a UK-EU trade agreement and help EUR/GBP to head closer to or below the 0.8900 level again."

ING sees the two sides edging closer toward a deal and the Pound-to-Euro rate climbing back toward 1.1235 over the coming days, which will see EU ministers holding video conferences throughout the week, although it's the leaders' conference on Thursday 19 that matters most for Brexit. Sterling has given negotiators the benefit of doubt in assuming they'll make the necessary compromises as this week's deadline draws near, which has lifted the Pound-to-Euro rate through October and November.

But these gains leave Sterling vulnerable to disappointment this week in the event that Thursday's summit passes without a deal being announced, which could see the market grow concerned about the prospect of a relationship governed by World Trade Organization terms. 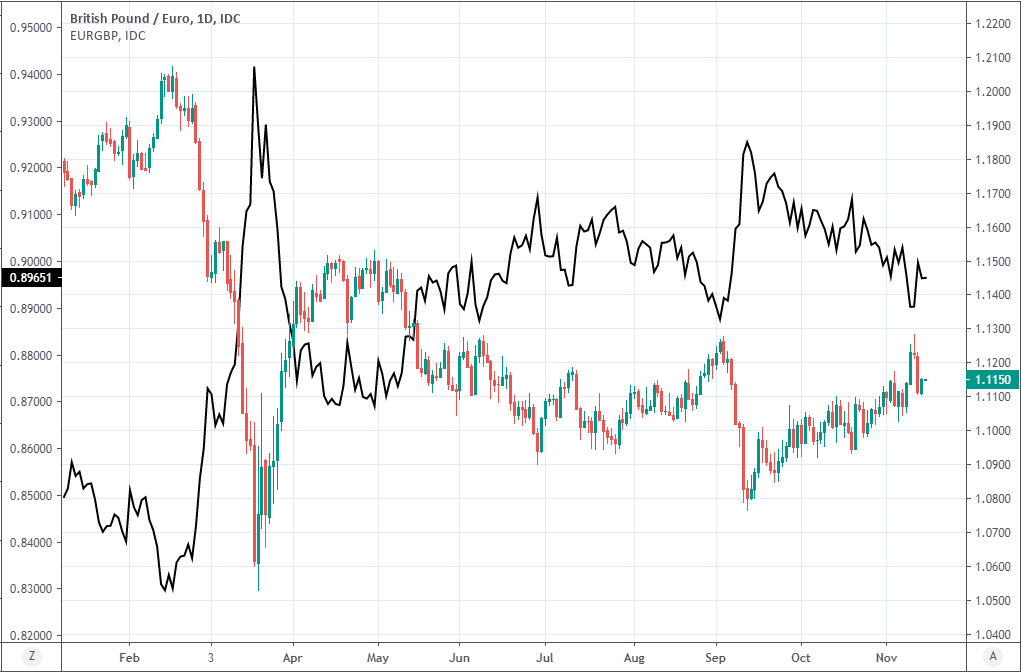 Above: Pound-to-Euro rate shown at daily intervals alongside EUR/GBP (black line, left axis). Lock in current exchange rate levels if you are looking to protect your international payments budget from uncertainty, learn how.

The two sides would still have a European Council meeting scheduled for 10-11 December at which either a deal could be endorsed or the Brexit transition extended beyond December 31, although failure to produce one this week could see confidence in Sterling tested.

"If we are wrong and instead head for no deal, EUR/GBP will move markedly higher (yet stay below parity)," says Mikael Milhøj, an analyst at Danske Bank.

Any agreement would need to be ratified in law across Europe, which could take weeks if not months and is why November 19  has come to be viewed as the final deadline for progress, although the two sides were still deadlocked over the so-called level playing field and fisheries last week.

"As our base case remains a simple free-trade agreement covering goods and that a deal is finalised over the next two to three weeks, we expect EUR/GBP to move lower in the very near term, supported by the positive vaccine news favouring cyclical currencies. We lower our 1M forecast to 0.86, which we believe will be the new trading midpoint in the coming year, although we believe risk is skewed towards it going lower than 0.86," Milhøj says.

Danske Bank is wagering the two sides will soon announce a basic free trade agreement this month, which is seen lifting the Pound-to-Euro rate to 1.1627 and promting the EUR/GBP rate to fall to 0.86 or below. Though not everybody shares the optimism about the outlook for Sterling.

"Any strength following a deal is unlikely to be sustained given the relative hit from COVID and the prospects of trade disruptions following a deal," says Derek Halpenny, head of research, global markets EMEA and international securities at MUFG. "The UK is not ready for new trading relations at the start of 2021." 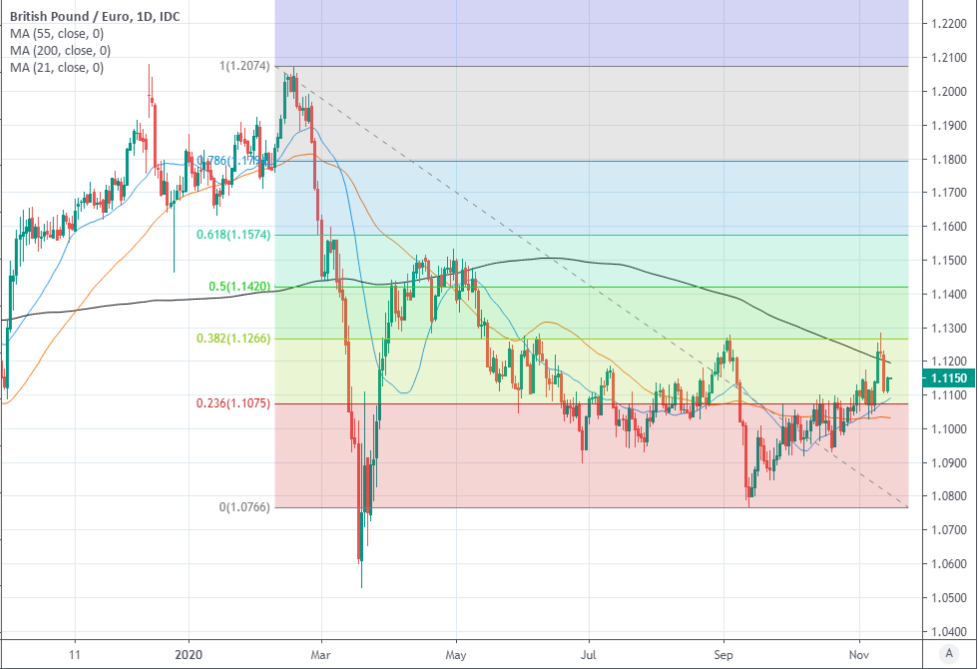 With the UK economy mired in its second lockdown and any pending Brexit trade agreement expected to be of the most limited kind, some analysts are skeptical that a trade deal will meaningfully improve the Pound's medium-term prospects. Meanwhile, and with the Pound-to-Euro rate entering the week at a two-month high, technical analysts are divided in their views on whether it's likely to continue higher in the week ahead, or reverse lower.

"Our bias remains to view strength as corrective ahead of an eventual clear and sustained break lower," says David Sneddon, head of technical analysis at Credit Suisse, referring to EUR/GBP.

Sneddon is watching the 0.8871 level of EUR/GBP, which is equal to 1.1272 for the Pound-to-Euro rate. Any rise above that level would confirm a "topping" pattern on the charts and could see Sterling targeting 1.1532 in the first instance as it reverses a long-term downtrend, Sneddon says.

"EUR/GBP is seeing a decent reversal from .8865/64, the June and September lows," says Karen Jones, head of technical analysis for currencies, commodities and bonds at Commerzbank, who sold the Pound-to-Euro rate at 1.1280 last week and is targeting a move down to 1.1045 over the coming days.

Ultimately, the outlook is balanced on a knife-edge at the beginning of a big week in the Brexit saga, which will likely be the key driver of price action over the coming days. T he looming Brexit deadline and a November lockdown that's expected to see the economy contract again in the final quarter likely mean that October's retail sales report due out on Friday will struggle for attention, although consensus looks for sales to have contracted -0.4%.

"Overall, the current lockdown means that more bad economic news is in the pipeline. But the prospect of vaccines could mean that at some point next year the UK will outperform its peers," says Paul Dales, chief UK economist at Capital Economics. "Given that the UK economy has been hit hardest by the COVID-19 crisis, it stands to benefit the most from vaccines. In that sense, the economy is like a trampoline – the lower you go on the way down, the higher you go on the way up. And this week we illustrated how vaccines could allow the economy to bounce back to its pre-crisis level in 2022 rather than in 2023." 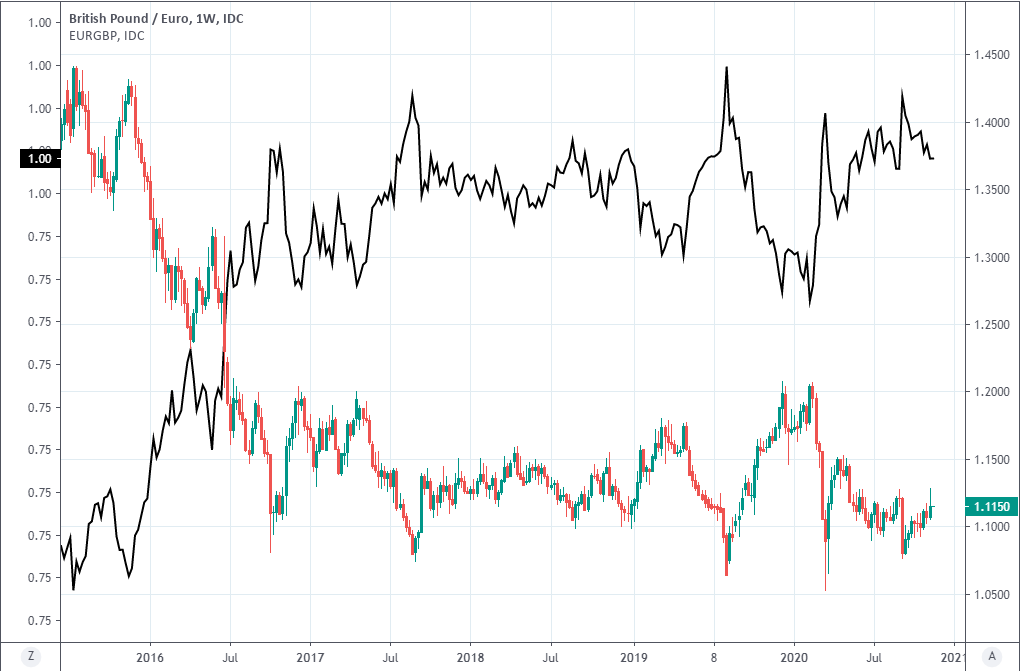