- GBP/EUR consolidating in a tight range near March lows.
- May struggle to get above 1.1040 without Brexit progress.
- Risks descent to 1.0850 ahead of Brexit update on Friday.

Sterling stabilised last week against a range of currencies including the Euro, which some analysts attribute to the sheer scale of September’s earlier losses.

However, investor pessimism may also have lifted somewhat given the seemingly optimistic sentiments of European negotiators and suggestions from British trade advisors that some form of “implementation period” could follow any hastily agreed last minute deal.

Previously, the Pound had suffered due to provisions in the Internal Market Bill that at least purported to give the clearest signal yet that the government may be willing to follow through on its threat to walk away from the negotiating table without a trade accord if acceptable terms cannot be agreed.

Access to the EU's large market will no longer be sold off.

From now on, we will better enforce the level playing field, in a market open to those who respect its standards.

Whether they leave our Union or want to move closer to it.#UNGA75

The talks continue over the coming days, beginning on Tuesday and culminating on Friday with a meeting of the chief negotiators.

The two sides will have just a fortnight to reach a deal from that point before the self-imposed October 15 deadline comes into view.

"GBP has been relatively immune to the fall in risk sentiment, with GBP/USD largely tracking the EUR/USD decline (while EUR/GBP has been flat). What currently matters more for GBP is the idiosyncratic driver of the UK-EU trade negotiations outlook. With the easing in rhetoric from both sides, GBP has been therefore stable vs the EUR despite the falling markets," says Petr Krpata, chief EMEA strategist for currencies and bonds at ING. “Nonetheless, given the roughly 50:50 chance of deal vs no deal, we continue to see GBP as inadequately priced for the risk presented, with limited risk premium built into GBP. We thus see risks to GBP on the downside.” 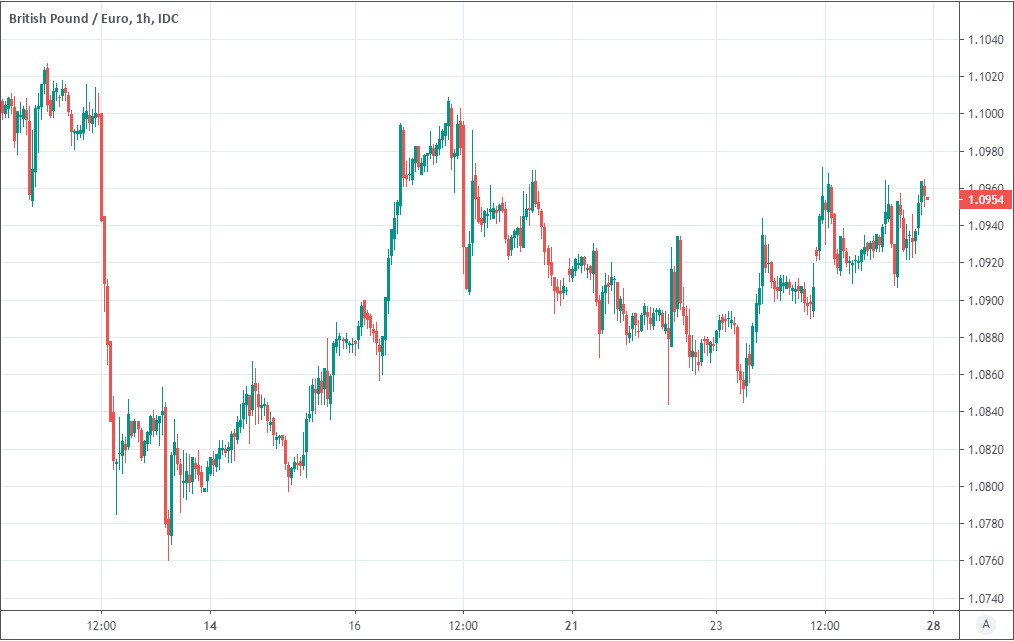 The Pound was the third best performing major currency last week despite steep declines for many stock and commodity markets as well as a Dollar rebound that might previously have seen Sterling underperforming.

But with September’s earlier losses now pared the Pound-to-Euro rate could again be vulnerable to investor caution early in the week and any Friday claims of only “limited progress” or revelations that “significant differences remain.”

More so given that Friday brought reports of comments from an anonymous UK official suggesting “If the gaps in these areas are to be bridged, the EU’s more constructive attitude will need to be translated into more realistic policy positions in the days to come,” referring to matters of fishing and the ‘level playing field’.

But with government trade advisors talking about so-called implementation periods and government-friendly political media now openly mulling what life might be like under a compromise on state aid, Sterling’s Brexit risk could now also be shifting to the upside.

This could mean Sterling is destined to go on range-trading, pending a break in one direction or the other ahead of the weekend.

"EUR/GBP is sidelined, lacking upside impetus,” says Karen Jones, head of technical analysis for currencies, commodities and bonds at Commerzbank, who’s a seller of the Pound-to-Euro rate. “We suspect that the market is consolidating ahead of another leg higher.”

Jones is a seller of the Pound-to-Euro rate and is looking for a decline to between 1.0726 and 1.0743 over the next one-to-three weeks, which would leave Sterling rested upon the 78.6%  Fibonacci retracement of its recovery from 1.0528 in early March. She says that while below the 55-day moving-average at 1.1043 the Pound will remain downward-biased. 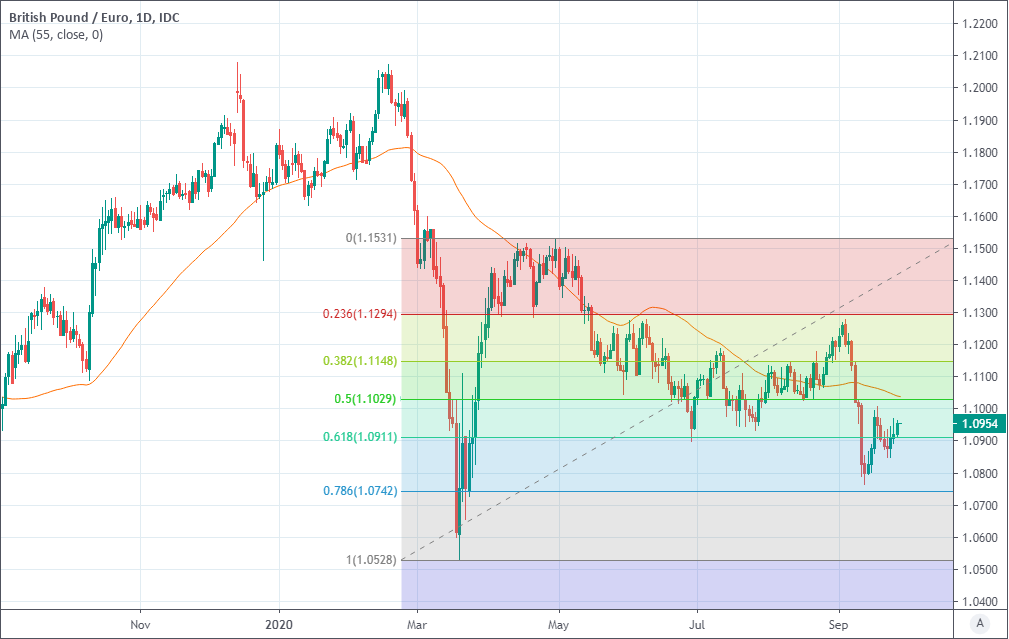 Above: Pound-to-Euro rate at daily intervals with 55-day average in organge and Fibonacci retracements of March recovery.

Much about the outlook depends on relative price action in GBP/USD and EUR/USD, which both declined last week and may be vulnerable to further losses over the coming days.

Many analysts now see the two falling to 1.25 and 1.15 regions respectively in the short-term, which implies a Pound-to-Euro decline to just above 1.0850.

"With COVID figures rising and fears of more restrictions increasing, the appetite to bring back and pay workers for hours not worked could be disappointing. But the government had little choice. Data released this morning revealed the UK budget deficit is heading for GBP 400bn, which based on a 10% GDP drop in 2020 would equate to about 20% of GDP this year," says Lee Hardman, a currency analyst at MUFG. "The data highlights to us the fact that the COVID crisis has hit the UK more than most. GBP is the 2nd worst performing G10 currency in this crisis, so the UK’s performance is partly priced. But with worse to come, GBP is set to weaken further."

Brexit talks will focus heavily this week on the so-called level playing field and will be the primary concern for the Pound-to-Euro rate, although a speech from European Central Bank President Christine Lagarde at 08:20 on Wednesday might also be watched closely in addition to Friday’s inflation figures.

Financial markets widely expect the ECB and Bank of England will both announce increases to the amount of government bonds they intend to buy under their quantitative easing programmes before year-end so any commentary from Lagarde on that note may not necessarily ruffle the Euro’s feathers. However, markets could be responsive to any comments on the currency because of earlier September complaints about strength in the Euro-to-Dollar rate. Any further protest might offer support to the Pound, although upward pressure on the Euro has eased of late against many currencies.

"Deterioration of the EUR and GBP outlook has coincided with the start of the second Covid-19 wave across Europe in September. Fears that the growing number of infections could force the likes of the ECB and the BoE to introduce fresh easing measures later this year could keep the EUR and the GBP on the defensive for now. We further note that the EUR has exhibited the strongest and statistically most significant correlation with the severity of the lockdown measures in the past. In turn, we would expect that any new measures to contain the virus in the Eurozone to have a detrimental impact on the single currency," says Manuel Oliveri at Credit Agricole CIB. 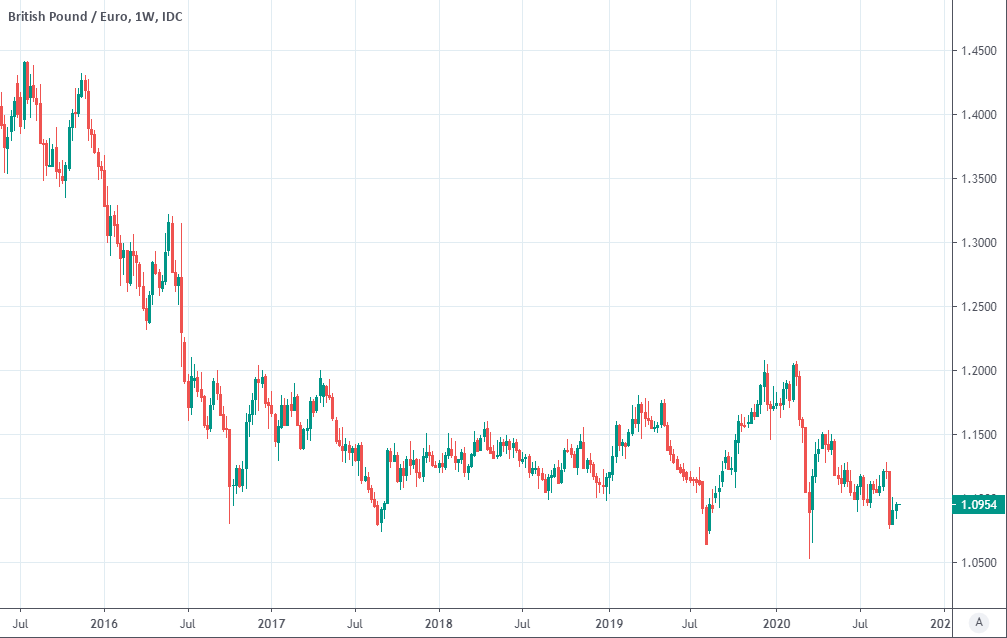