The Pound-to-Euro exchange rate returned to June lows last week and is tipped by multiple analysts remain under pressure in what ocould be a volatile week for both Sterling and the Eurozone's single currency.

Pound Sterling limped into the weekend Friday after a hat-trick of losses that came as risk appetite waned among investors, who turned cautious after the June policy statement from the Federal Reserve (Fed) and has concerns grew over a possible second wave of coronavirus infections, mainly in the U.S.

Both currencies will remain sensitive to the mood among investors and resulting price action in stock markets, which will respond early in the new week to the prospect of a second wave of coronavirus infections in the U.S. as well as China after parts of Beijing re-entered 'lockdown' at the weekend.

New cases have continued to rise in a handful of reopened U.S. states while the global tally has increased with the ongoing outbreak in large but developing countries. The Pound-to-Euro rate tends to have a positive correlation with stock markets so would likely continue tracking any moves lower.

Technical analysts say the signals coming off the charts remain bearish, while Sterling faces a cocktail of risks spanning Brexit, economic data and Bank of England (BoE) policy that could prompt volatility in the coming days.

"EUR/GBP continues to see a strong recovery from trend line support," says Karen Jones, head of technical analysis for currencies, commodities and bonds at Commerzbank. "A bullish bias will be maintained while above the short term uptrend and we look for the market to retest 0.9056/86, the recent high."

From a GBP/EUR perspective, this analysis shows the Pound will likely remain under pressure so long as it's quoted below 1.1273 and Jones is targeting a move down to 1.1042 over the coming days, and there's scope for a return to 2008 lows around 1.02 over the coming weeks and months. Jones sold the Pound against the Euro at 1.1248 last week.

Jeremy Stretch, European head of FX strategy at CIBC Capital Markets also favours the Euro, writing in a note on Friday: "weak data underlines the presumption of the UK being the most impacted of all the developed countries. Although the cross may have again struggled to extend gains beyond 0.90 yesterday, we would maintain a positive bias." 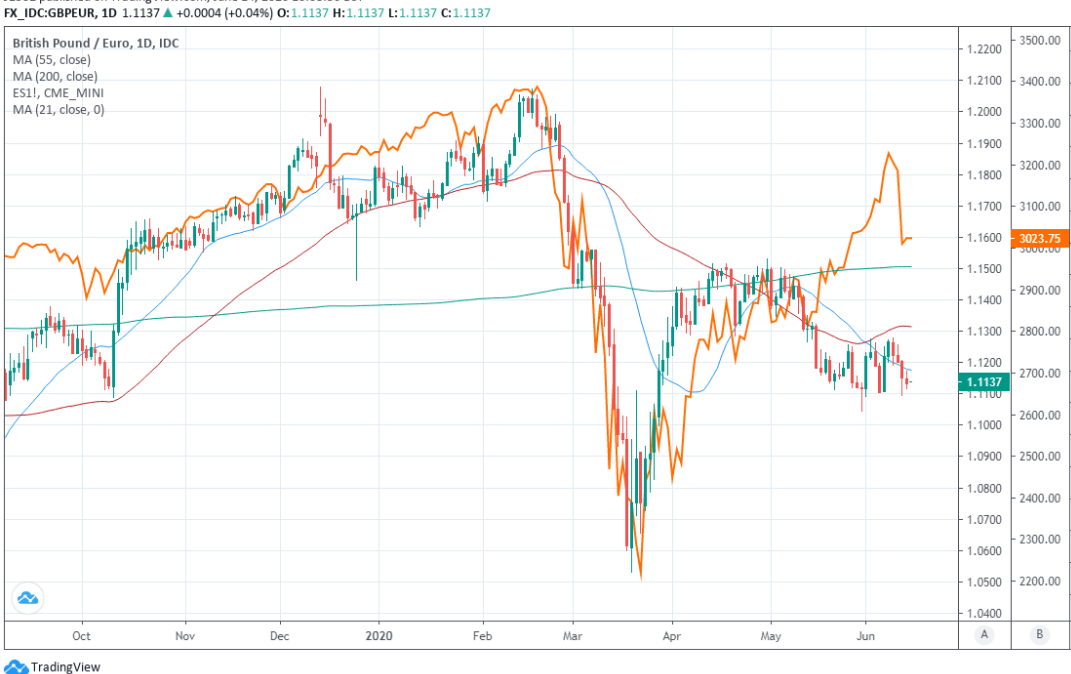 It's not just technical analysts who're bearish in their outlook for the Pound as there's also a growing line of others who also see the British currency remaining under pressure in the weeks ahead, with many citing the trajectory of Brexit talks, BoE monetary policy and coronavirus-related economic damage that's heavier than in most other developed countries.

The rub for the Pound though is that all of those factors will be in focus among investors again this week.

"While we left our main macro forecasts unchanged this month we revised up our forecasts for the euro and down the one for the GBP. The proposal of a European Recovery Fund has materially brightened the longer-term outlook for the euro, and we now expect the EUR-USD pair at 1.15 towards year-end. The prospects for the British pound are worsening as political support for the extension of the post-Brexit transition period fades. We see GBP-USD at 1.25 towards the end of 2020," says Dr. Claudlo Wewel, a strategist at J. Safra Sarasin, who forecasts a Pound-to-Euro rate of 1.0869 by year-end.

Prime Minister Boris Johnson will e-meet EU chief executive Ursula Von der Leyen Monday, ahead of Thursday's European Council summit, and many in the analyst community are hoping to see a push for compromise between the two parties, although few have much confidence that one will come. This week's summit is an obvious opportunity for a compromise to be struck and capitalised upon by the year-end expiry of the transition period but it's not the last.

"We are tempted to say that no-deal Brexit risks 2.0 are larger than ever. i) Since there is already a recession, no-one will notice that a no-deal will add to it, why the political timing is good for an exit now and ii) Boris Johnson may be tempted to leave the EU ASAP given the current “New Generation EU” momentum, which exemplifies everything the Brits wanted to flee from," says Andreas Steno Larsen, chief FX strategist at Nordea Markets. "We bet on GBP weakness."

Many are already betting against the Pound and the market has become well accustomed to the idea of deadlock in the trade talks so even a few words of optimistic ambition from the two leaders might be enough to seem like a game-changer on Monday. However, if Thursday's EU meeting comes and goes while leaving only deadlock behind in its wake then Sterling might struggle.

"Holding a short position in GBP while global market risk sentiment improves is a painful trade. We recognised this a few weeks ago and held short GBP/AUD as a better way of expressing the negative GBP view. But with the broad rally in EUR we switched into long EUR/GBP," says Jordan Rochester, a strategist at Nomura. "We’ve been holding EUR/GBP longs due to lower UK real yields, a pro-euro area growth recovery story and the weight of Brexit talks. However, GBP has traded slightly higher vs EUR than we expected in recent sessions, but it is yet to break out of its ranges and we expect EUR/GBP to grind higher." 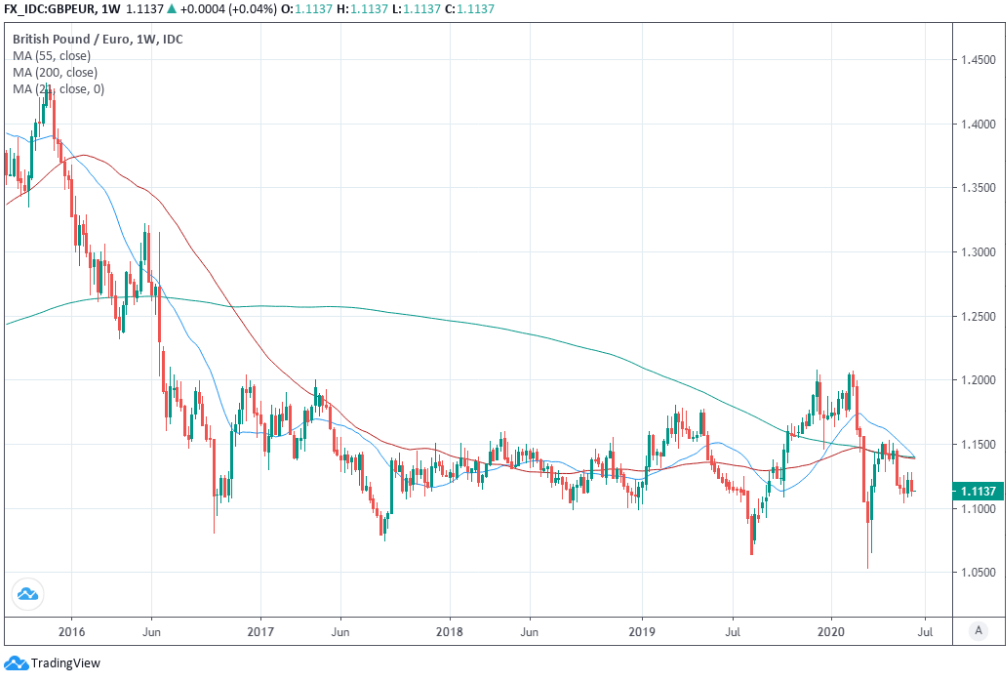 Above: Pound-to-Euro rate shown at weekly intervals with 21, 55 and 200-day moving averages.

The Pound will on Monday confront those risks as non-essential retailers reopen in the UK for the first time since March, in what will be a big step back towards normality for the UK economy. Meanwhile, the Euro will be judged according to the evolving prospect of the EU recovery fund garnering enough support in the European Council meeting that begins Thursday.

Tuesday will see employment data for April released, which brings the market's focus back onto the comparatively larger hit dealt to the UK's services-heavy economy by the coronavirus. GDP fell by -20.4% that month, Office for National Statistics figures revealed, and at an annualised pace of -24.5%. Consensus looks for the jobless rate to rise from 3.9% to 4.7% but risks are to the upside given the 1.4 million new claims made for welfare benefits that month, which would lift the jobless rate to 8% if all newly idled workers told the ONS they were actively looking for alternative employment.

"A GBP100 billion asset purchase expansion was discussed at their last meeting in May. It remains the most likely outcome with risks skewed in favour of a larger expansion. The GBP reaction is likely to depend more though on any update on the BoE’s latest thinking on negative rates. The GBP could stage a relief rally if the updated BoE communication does not reinforce negative rate speculation, and vice versa. In these circumstances, we expect a more volatile GBP," says Lee Hardman, a currency analyst at MUFG.