Sterling dipped against the majority of its peers as the new week commenced with traders looking to take money off the table ahead of some significant events regarding EU-UK trade negotiations and the release of official data that will show the extent of the post-election pickup in UK economic activity.

The Pound does nevertheless look relatively well supported against the Euro and at this juncture we would expect weakness to be relatively shallow. Indeed, there appears to be a sense in the market that any weakness in Sterling offers a chance to buy back into the rally that has been in place since August 2019. 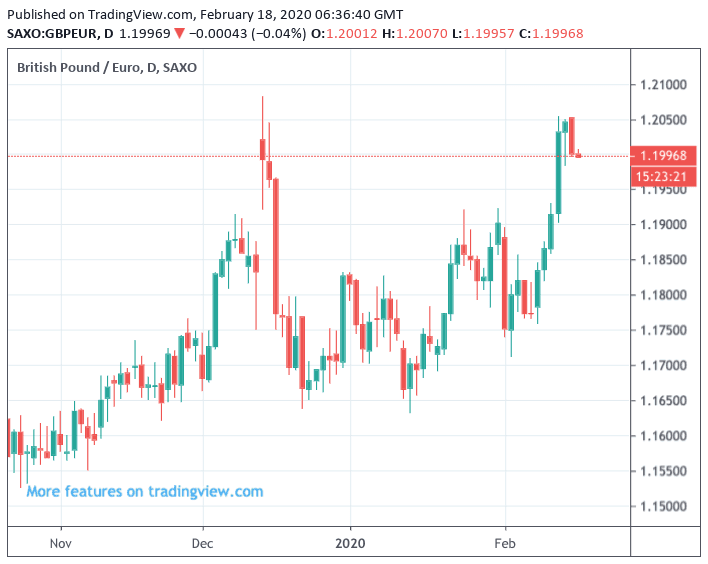 We do however expect some volatility this week in Sterling exchange rates as markets eye out key economic data releases. Tuesday sees the release of labour market data with the key release being wage numbers. The market is looking for a reading of 3.0% for wages in December; should the outcome beat expectations Sterling might catch a bid and go higher.

Note the numbers cover the December period, so we would expect any moves either higher or lower to ultimately be faded.

However, we would expect the market to be more interested in inflation data out on Wednesday as this covers the post-election period. January CPI inflation is forecast to read at 1.6% year-on-year, which places it well below the Bank of England's 2.0% target. A weaker reading could add downside pressures to the GBP/EUR exchange rate, while a beat of expectations could well ignite some upside in Sterling and feed into the narrative that the UK's economy should put in a relatively robust performance in 2019.

"Over the medium term, topside economic surprises may lead to the pricing out of 25bps worth of MPC cuts. This in conjunction with the Pound’s cheap valuation, should lead to moderate upside in GBP over the next 6-12m," says a note from Citibank, the world's largest dealer of foreign exchange.

Trade negotiations have meanwhile jumped back onto the agenda for the Pound after David Frost - the UK's chief Brexit negotiator - said in a lecture in Brussels on Monday evening that the EU’s push to make the UK follow its rules will reduce the chances of a trade deal.

Frost said the UK does not want a unique or special deal, but is merely asking for a copy of the deals the EU has already struck, such as with Canada and South Korea. These countries have virtually tariff-free trade with the EU but do not have to follow EU rules.

Frost said the UK's position is that any deal cannot include any regulatory alignment, any jurisdiction for the Court of Justice of the European Union over the UK’s laws, or any supranational control in any area.

The EU is believed to be wanting the UK to commit to alignment on subsidies, comply with its standards on tax and stick to its rules on workers and the environment in order to ensure the UK does not become a competitor.

The significant disagreement between the two sides, before trade negotiations have even officially begun, will keep foreign exchange markets wary of the two sides failing to settle on a deal by the end of 2020.

The Euro is Finding No Love, but One Analysts Expects a Rebound

Much of the Pound-to-Euro exchange rate's recent upside impetus has evolved out of deteriorating sentiment towards the Eurozone, where there are scant signs of a 2020 recovery. The outlook for the exchange rate therefore rests in part with whether or not the Euro's recent woes continue to be a market theme over coming weeks.

Indeed, with the coronavirus outbreak in China being tipped to hurt Eurozone exports there is a sense the European Central Bank could have to cut interest rates at some point in the first half of 2020 in an effort to stimulate Eurozone economic growth. Such measures could well add further pressure on the Euro exchange rate complex.

"One currency not feeling the love of late is the EUR," says Bipan Rai, a foreign exchange market strategist at CIBC Capital Markets. "There are 4-5 legitimate reasons why this move has happened including weak demand in Germany, Brexit, and the COVID-19 impact on China (Germany’s largest trade partner)."

However, Rai is "leery about establishing fresh shorts here."

Rai says the Euro is looking oversold, particularly against the Dollar, which if corrected could lead to a broad-based recovery in Euro-based exchange rates.

On the matter of the coronavirus outbreak, "if you think COVID-19 is the main reason why the EUR is weak, then what do you do once the shock is out of the way?"

Indeed, a strong recovery in China would certainly aid the likes of Germany and could well prompt a bout of Eurozone outperformance. Of course, calling the end of the coronavirus outbreak, or simply quantifying its impact, remains a tough challenge for even the greatest of the world's economists.

Rai says that, contrary to what some of his peers in the analyst community believe, "the ECB is done easing."

"Cyclically, the data in the Eurozone is set to improve. Calls for an underperforming EZ economy is SO 2018 and 2019," says Rai.

We reported last week that analysts at Credit Suisse believe the ECB won't be able to ignore the ongoing underperformance in the Eurozone, and as such they are forecasting a potentially Euro-negative rate cut by the time the middle of the year comes around.

For the Euro bulls hoping for a recovery, good news needs to come out of China, and fast.