- EUR to be teste by ECB decision and IHS PMIs this week.

Pound Sterling starts the new week against the Euro softer and looks to be poised to test the 1.17 level once more, a level which charts are suggesting is a new pivot point the exchange rate keeps being drawn back towards.

On this week's calendar will be jobs numbers for December and PMI data for January, which should both give an indication as to whether or not the Bank of England (BoE) will cut interest rates on January 30.

Sterling closed 0.10% lower against the Euro for the week on Friday after softening inflation and dire retail sales data encouraged a further waning of the post-election uptrend in the Pound-to-Euro exchange rate as markets increasingly price in a January 30 interest rate cut from the BoE.

The exchange rate has made several attempts at returning to its post-election high near 1.21 but failed on each occasion and has effectively traded sideways, oscillating around 1.17, thus far in January: 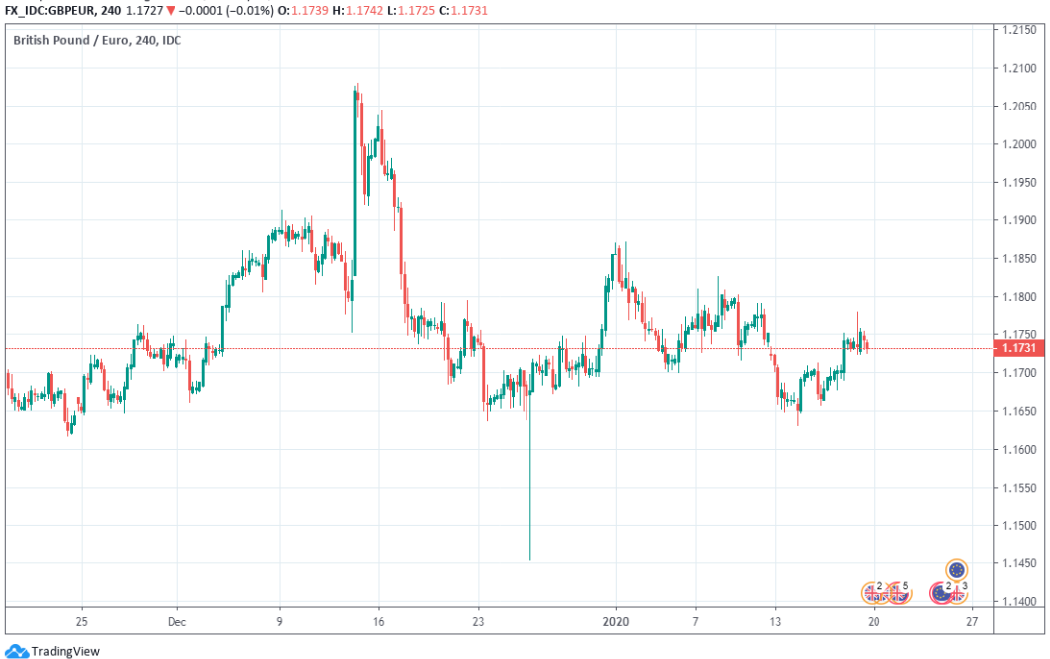 Karen Jones, head of technical analysis at Commerzbank, says the 1.1627 level  is key to the outlook for the Pound-to-Euro rate, with a daily close below that threshold likely opening the door for a further move down to the 200-day moving average located around 1.1389 (0.8780 for EUR/GBP), which would mark the lowest level seen by the British exchange rate since October 11.

However, so long as Sterling remains above the 1.1627 level the Pound-to-Euro rate is expected to retain an upside bias.

Jones has been betting on an increase in the Pound-to-Euro rate but told Commerzbank clients Friday to walk away from the trade at 1.1764. The neutral technical outlook and proximity of the market to several key levels enhances the importance for Sterling of economic data due out in the UK and Europe over the course of this week. 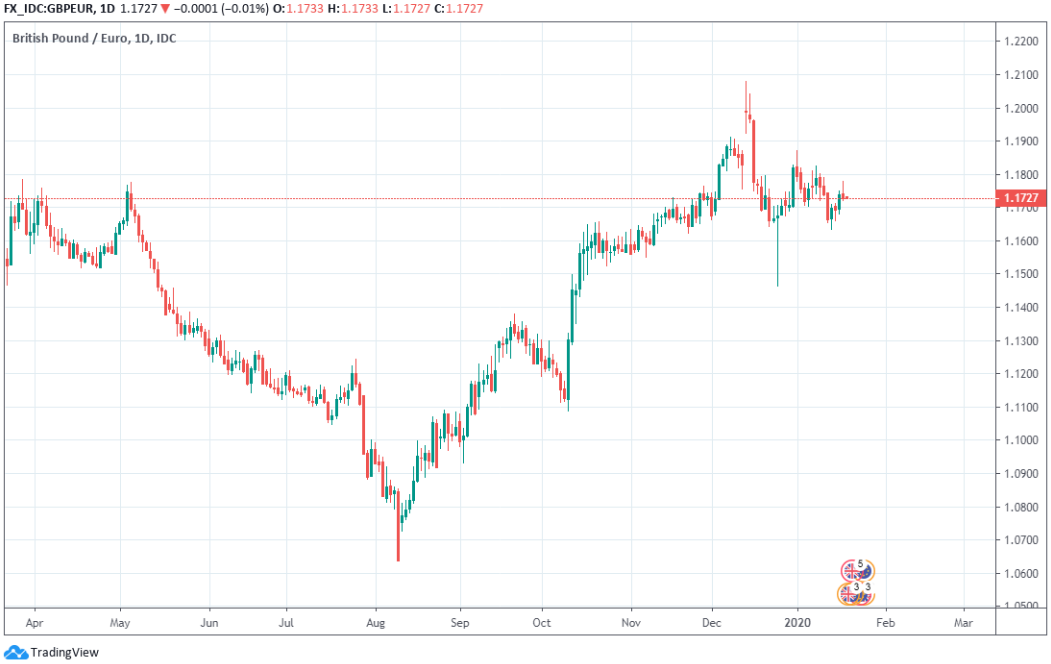 Pound Sterling: What to Watch this Week

The Pound was the worst performing major currency last week although it still faces a plethora of risks that have scope to cause volatility in the coming days.

Tuesday marks the release of unemployment and wage growth figures for December, which have been elevated in importance by the dire messages coming from other data released in the last fortnight.

“Looking ahead, we are fast approaching two big events: The Bank of England decision on interest rates on 30th January preceding the deadline for Brexit the very next day,” says Lee McDarby, managing director of corporate foreign exchange and international payments at Moneycorp. “Sterling continues to be stable, though this could be the calm before the storm. More information on the Bank of England’s decision this coming week could weaken the pound.”

Consensus is looking for the unemployment rate to hold steady at a multi-decade low of 3.8% for December and for wages to have grown by an annualised 3.1%, down from 3.2% in November.

The data is out at 09:30 Tuesday while IHS Markit PMI surveys are due at the same time Friday. Markets are looking for the domestically as well as globally troubled manufacturing sector to have retrenched at a lesser pace this month.

“A stream of disappointing UK data has confirmed the MPC's concerns and sharply increased the odds of a January rate cut. Both November UK labour data and January PMIs will be crucial factors to watch next week. A downside surprise or signs that the data is not improving would likely cement market expectations of a cut,” says Chris Turner, head of FX strategy at ING.

Inflation and retail sales data out last week have prompted the market to go further in pricing-in a January 30 rate cut from the Bank of England and in the process, undermined appetite for the Pound. Retail sales revealed the economy hasn't seen any boost from the Black Friday promotions, which it typically does, adding to mounting evidence of a final quarter contraction.

Inflation of 1.3% is well below the BoE's target of 2% and growth was just 0.6% in the 12 months to December, leaving it substantially below the economy’s estimated 1.25% inflation-producing rate of expansion. This could mean a rate cut is inevitable although Tuesday’s jobs data, Friday’s PMI surveys and the January 29 Autumn forecast statement could yet persuade the Monetary Policy Committee to leave Bank Rate unchanged at 0.75% for a few months more while they observe the development of the economy.

Pricing in the overnight-index-swap market had fallen to imply on Friday, a month-end Bank Rate of 0.55%, below the current 0.75% but still a fraction above the next level down of 0.50%. And the implied Bank Rate for December 23, the final interest rate decision of the year, had fallen to 0.40%.

“This suggests that the downside to sterling may be limited. Indeed, disappointing retail sales for December sparked only a muted reaction in the currency on Friday. If anything, the risks are skewed to more pronounced GBP upside (than downside) next week, as a possible rebound in PMIs would reverse expectations of monetary easing. Hence, our asymmetric GBP/USD range with an upside skew for next week (1.2950-1.3200),” says ING’s Turner.

Current market expectations mean there’s upside as well as downside risks to Pound Sterling in the coming weeks because if the BoE does cut this month then there’s no telling what investors might price-in for later in 2020.

And if the BoE holds rates steady and indicates it might wait a while before cutting, implied levels for subsequent months may rise. However, ING says that in such circumstances, rallies in the Pound would also be limited because markets might still fear a rate cut at a later date.

The Euro ceded ground to most major rivals last week amid an improvement in investor appetite for riskier assets and as U.S.-EU trade tensions appeared back on the market’s radar, although economic data and the European Central Bank (ECB) will drive price action in the single currency this week.

Thursday at 12:45 will mark the release of the latest ECB interest rate decision and although all of the bank’s interest rates and various policy initiatives are expected to go unchanged, markets will still scrutinise details of the statement and press conference closely for clues on the outlook.

“ A lot of attention will be given to the ECB meeting with Christine Lagarde laying out the details of the policy framework review. However, while we see this as an important theme for the markets this year, we probably won’t get enough clarity next week to drive the markets. Some increased optimism though from the ECB given improved data may help support the euro,” says Derek Halpenny,  head of research, global markets EMEA and international securities at MUFG.

Former International Monetary Fund chief Christine Lagarde now heads the ECB and has made a strategic review of the bank’s current policy stance the first item on her agenda.

This is expected to take months and could mean that Thursday’s policy event lacks market-moving information, which would leave investors looking to Friday’s PMI surveys for clues on the Euro outlook.

“Eurozone long term yields bottomed out in late Q3 last year, as the US and China stepped back from further trade war escalation. The following reduction in the chances of serious Eurozone recession has tampered expectations of further ECB easing, and allowed the euro to rally modestly,” says Ranko Berich, head of market analysis at Monex Europe.

December’s IHS Markit PMI numbers were revised higher for the Eurozone manufacturing and services industries earlier this month, although the manufacturing industry remains mired in a contraction much like its counterparts across the developed world.

This has boosted sentiment towards the Euro but means Friday’s ‘flash’ numbers for January will be watched closely by the market. Any disappointments will weigh on the single currency while upside surprises would likely draw a bid from the market.

Consensus is looking for the manufacturing PMI to rise from 46.3 to 46.9 while the services PMI is seen rising from 52.8 to 52.9. It’s possible the manufacturing PMI for Germany, which is seen rising from 43.7 to 44.6 when the number is released at 08:30 Friday, will garner more attention from the market than the Eurozone numbers that are set for release at 10:00 on the same day.

“The “flash” January PMI release will provide an early indication of EA growth momentum in Q1 20. Business sentiment in December was mixed with the services sector remaining resilient into year-end amid persistent manufacturing gloom. We expect EA manufacturing sentiment to get some support from an improving global trade backdrop, while services sentiment should remain at healthy levels,” says Iaroslav Shelepko, an economist at Barclays.