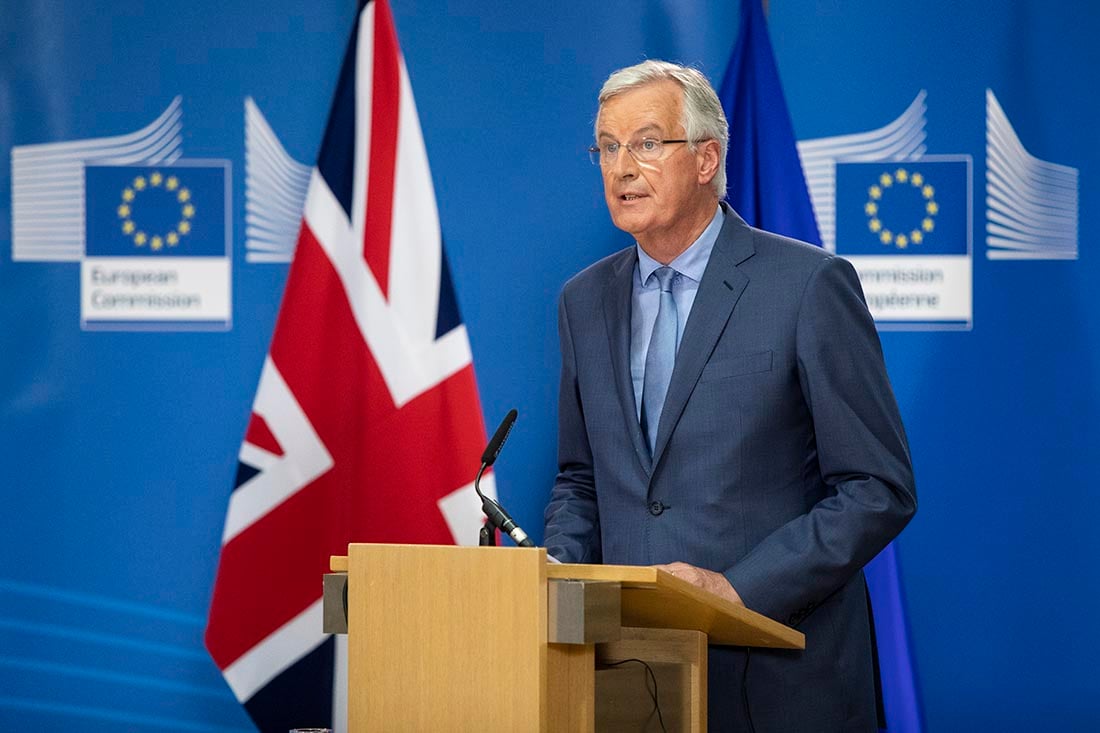 - Rumours suggest outline of deal to be agreed tonight

- But DUP warn they are unlikely to back latest deal

- Sterling rallies but, DUP report takes some shine off gains

The Pound-to-Euro exchange rate has jumped 1.25% today to record its highest level since May, on headlines that EU and UK negotiators are closing in on a legal text that will pave the way for EU leaders to sign off a deal at this week's summit.

According to a Bloomberg newswire report, UK and European Union negotiators in Brussels are closing in on a draft Brexit deal with optimism that there will be a breakthrough before the end of Tuesday.

The brief headline from the newswire saw Sterling exchange rates pop across the board, with traders betting the two sides have done enough for European leaders to sign off on a new deal at this week's European Council summit, slated to start on Thursday.

"Sterling jumped to its strongest in four months against the US dollar and cleared a big technical level as reports said UK and EU negotiators are closing in on a draft Brexit deal," says Neil Wilson, analyst with Markets.com. "These kind of reports expose just how vulnerable sterling is to headline risk. At present these are unconfirmed reports and need to be verified – we just have Bloomberg citing two people with knowledge of the talks."

The Guardian has however added fuel to the rumours, saying "it is understood that the negotiating teams have agreed in principle that there will be a customs border down the Irish Sea. The arrangement was rejected by Theresa May as a deal that no British prime minister could accept."

If the reports of progress are true, then there is a high probability that MPs will be asked to vote on a deal this Saturday.

The Pound rallied across the board on the news, and is now delivering fresh multi-week highs against the Euro, Dollar and nearly all major currencies.

EU and UK negotiators continue to seek a solution to the vexing question of the Northern Ireland border, and according to The Telegraph a Brexit deal appears to be taking shape after sources on both sides of the Channel said a positive day of negotiations on Monday had yielded a potential solution to the Northern Irish border problem.

DUP due to meet PM this evening, with this in mind https://t.co/ewFXon6q21

Sources in Brussels and London told the newspaper there was "cautious optimism" that a narrow path to a deal could now be appearing, which suggests a more upbeat tone from the assessment made by the EU’s chief negotiator Michel Barnier on Sunday.

Barnier told journalists in Luxembourg today that a deal is still possible this week, but said the UK must now produce a legal text.

The EU has told apparently told UK Prime Minister Boris Johnson to make new concessions by midnight or there will be no Brexit deal at this week’s summit.

"The ultimatum means that unless David Frost, Mr Johnson’s lead negotiator, gives Brussels a new legal text setting out the government’s alternative to the Irish backstop, talks will continue into next week, leaving the Conservative leader with no deal to unveil this weekend," reports The Times.

If a deal is not struck today, the prospect for a late-October emergency EU Council Summit comes into play.

We would therefore urge readers to be wary of any disappointments on this front that might take the shine of Sterling as markets brace for further delays.

"The UK Pound has once again been dominated by rumours. Anyway, something's brewing. Although the currency's downward potential is rather limited, parliamentary arithmetic looks set to become a stumbling block," says Marc-André Fongern at MAF Global Forex.

Indeed, if a deal is struck between the EU and UK market focus will swiftly turn to Parliament where MPs that have rejected a Brexit deal on three occassions will be asked to vote for a fourth version as soon as Saturday.

The key test for a deal passing through Parliament is whether the deal gains the backing of Northern Ireland's unionist DUP whose support the Government will need, not only because of the numbers they provide but because of the Conservative 'Brexiteer' votes they will unlock. And, news out late on Tuesday is the DUP will not support Prime Minister Boris Johnson's Brexit deal if he has to make more concessions to the European Union to get it done, according to the HuffPost.

"The problem is that the EU and Republic of Ireland see it as a chance to push for more," the website quoted a DUP source as saying. "We will not be going more or giving more. Difficult times ahead."

The DUP headlines could explain why at the time of writing some of the sparkle of Sterling's earlier rally has already started to fade.