- Pound to be impacted by Brexit developments and Bank of England

The British Pound is forecast to remain under selling pressure against the Euro over the short- and medium-term timeframes with currency market attention likely to fixate on Boris Johnson's Brexit strategy.

The Pound-to-Euro rate starts the new week at 1.1170k, a third of cent down on the previous week as the steady erosion continues.

We saw a sharp dip late on Friday amid chronic uncertainty pertaining to Brexit, and technical studies of the charts suggest the exchange rate is set to continue its downtrend in the days ahead.

The 4-hour chart - which we use to ascertain the short-term trend - shows the pair in a renewed move lower after bouncing. The dominant trend is down, and given the old adage that “the trend is your friend,” it is expected to continue. 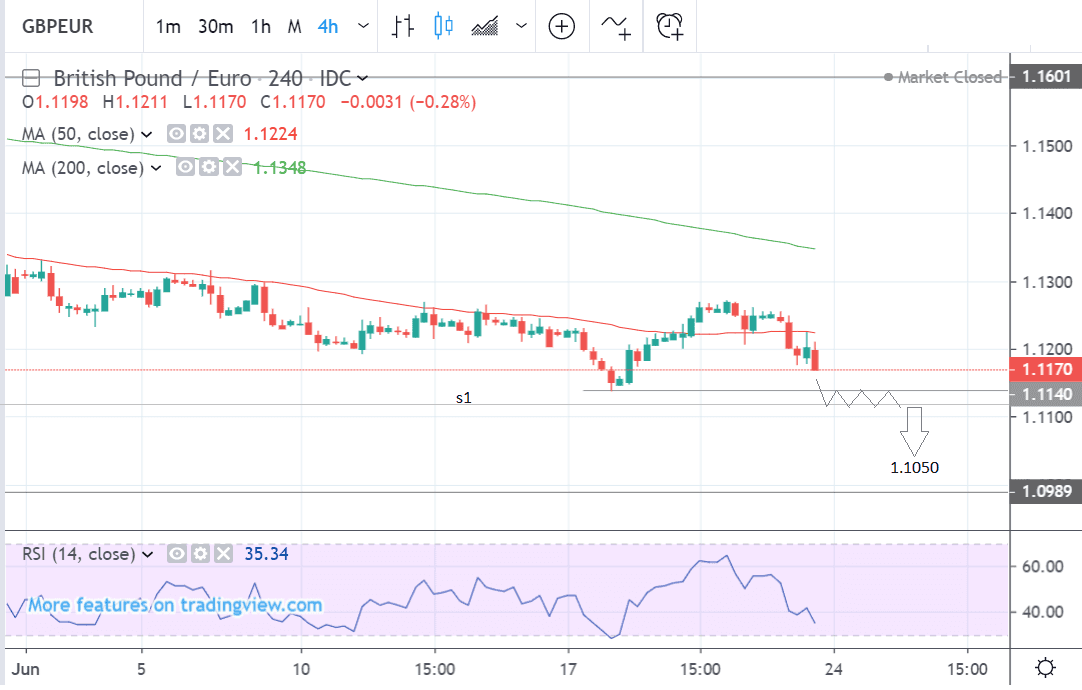 A break below the 1.1178 lows would open the door to a continuation down to the 1.1140 lows, followed by 1.1126, where the S1 monthly pivot is situated, a level of mild support on charts, which professional traders use to gauge the maturity of the trend.

It is possible that there will be some sideways activity in the lower 1.11s but eventually a move down towards a target at 1.1050 is envisaged.

The daily chart shows the pair in a long-term downtrend which is likely to range trade for a short while before extending towards a target at 1.1000, conditional upon a break below the 1.1140 lows.

The 1.1000 target is at the bottom of a long-term range so the pair is likely to stall or pause at that level.

The daily chart is used to indicate the medium-term outlook which includes the next week to a month ahead.

The weekly chart shows the pair in an uninterrupted 6 week downtrend within a longer-term sideways range. 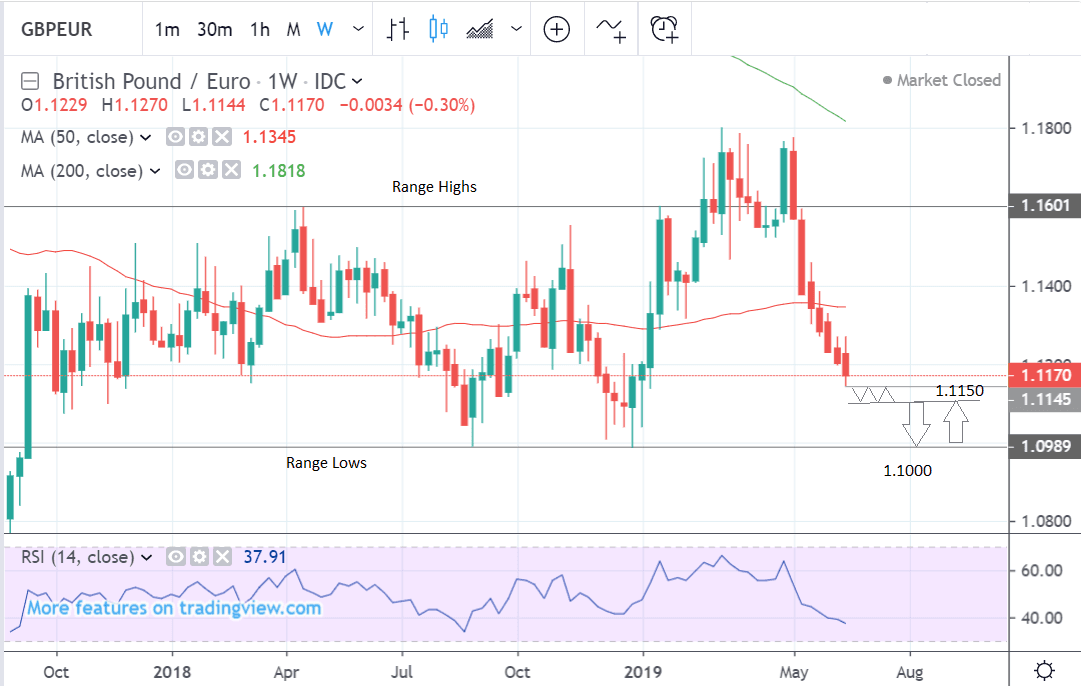 In the long-term, the pair will probably touch down at the 1.1000 range lows before bouncing and continuing to unfold within the parameters of its sideways trend.

The leadership race may take a back seat as a Sterling driver in the coming week as the two remaining candidates Boris Johnson and Jeremy Hunt will be busy campaigning around the country, and the final results are not expected until July 22.

Johnson is the front-runner by a large margin and bar any major revelations which would make him unsuitable for the job he is likely to win the race and become the next Prime Minister.

Any details on Johnson's Brexit strategy could prove to be important for near-term Sterling direction.

Part of the reason Sterling has weakened over recent weeks is the growing likelihood this will be the case: Johnson is a hard-Brexiteer who could potentially take the UK out of the EU without a deal. However, such a strategy could almost certainly a handful of defections by Conservative MPs opposed to 'no deal', which would ultimately see the Government unable to govern, in turn inviting a General Election.

A General Election taking place over coming months is another source of uncertainty that should see Sterling remain under pressure. 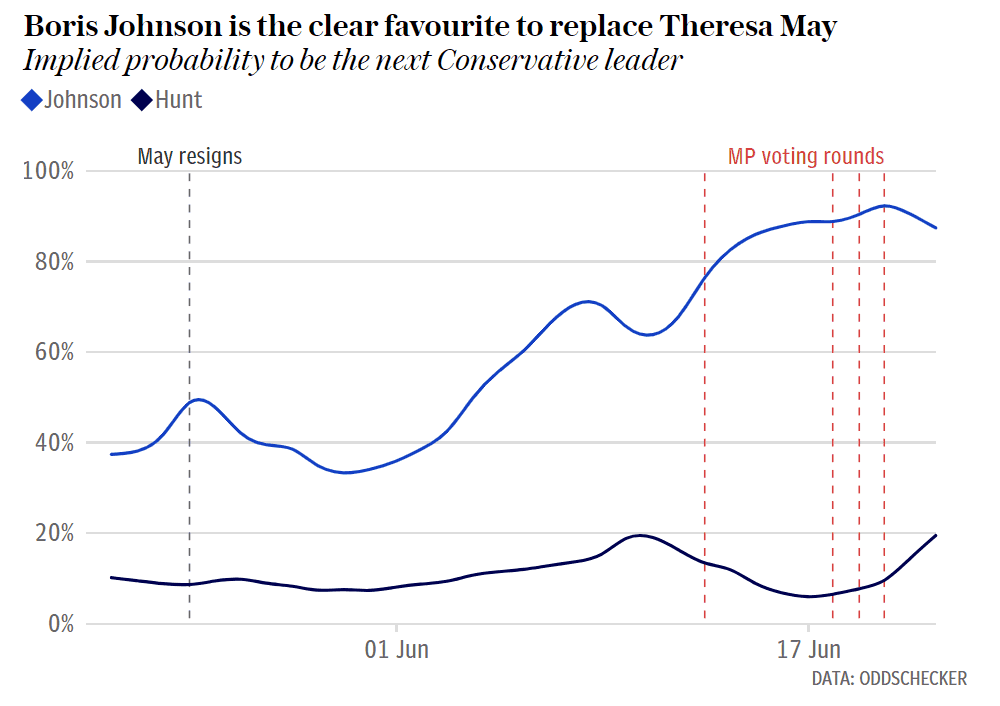 Sterling has also fallen on the so-far unyielding response of EU officials to hints Johnson wants to renegotiate. This has increased the chances of a stalemate and the UK simply flopping out without a deal on October 31.

Another possible factor which could impact on the Pound is the inflation report hearing on Wednesday, June 26.

This involves the Governor of the Bank of England (BOE) Mark Carney and other BOE officials taking questions from the Parliamentary treasury select committee on the outlook for inflation and the economy.

Although most of their answers will be highly conditional on what sort of Brexit the UK has, they could still impact the Pound.

The BOE uses inflation and other economic data to decide on the level at which to set interest rates, and these have a direct influence on the Pound.

The second estimate of Q1 GDP is forecast to show growth unchanged at 1.8% year-on-year (yoy) and 0.5% (mom) when it is released on Friday on 9.30 BST. Only a revision would impact Sterling.

Other data out in the week ahead is the current account and business investment, which are both scheduled for release at the same time as GDP; and gross mortgage approvals, out at 9.30 on Wednesday.

The main releases for the Euro are inflation and core inflation in June, out on Friday, June 28 at 10.00 BST.

Core inflation, which is probably the more reflective of demand, because it strips out volatile oil and food components, is forecast to rise to 1.0% in June from 0.8% in May, on a year-on-year (yoy) basis - which means compared to June 2018.

Broad inflation is expected to remain at 1.2% in June (yoy), the same as it was in May.

The Eurozone economy is currently struggling to generate the growth to push inflation higher, hence why we heard last week that officials were readying to unleash another round of stimulus.

The news saw the Euro take a dip in response.

It is within this context that the latest set of inflation data arrives: a stronger-than-forecast reading could generate some strength in Sterling, while a disappointing reading might trigger some further weakness. 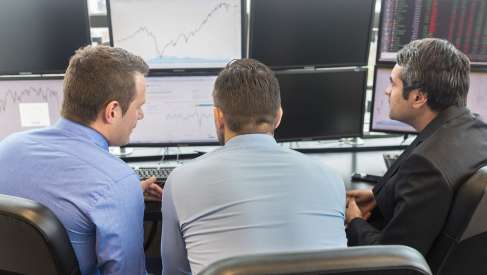