- "Central bank was not dovish enough and so the euro spiked higher" - Forex.com

The European Central Bank has opted to keep policy rates unchanged, as expected.

However, in a statement released following their meeting, policy-makers did not hint at the potential for further interest rate cuts in the future and the Euro went higher as a result.

Subtleties are key when it comes to ECB communication, and according to analysts at Danske Bank, it was the ECB's choice to omit that rates would be kept at "present or lower levels" that markets are latching onto.

Foreign exchange markets were expecting the ECB to take a more proactive approach on fighting the Eurozone economy's current soft patch, particularly as headwinds to global growth are blowing stronger as the U.S. and China ramp up their trade war.

It appears the market was positioning itself for hints of a future interest rate cut which - as a rule-of-thumb - would weigh on the Euro.

"Market expectations of a 2019 cut fell from 47% to 35%, signalling that the key takeaway was that things would likely remain steady rather than provide further easing," says Joshua Mahony, Senior Market Analyst at IG.

The Euro saw some volatility on the release of the statement and ultimately went higher: EUR/USD was quoted sub-1.1230 before the release was made to quote at 1.1263 in its wake. The EUR/GBP exchange rate was sub-0.8845 and has since gone to 0.8856, looking at this exchange rate from the Pound to Euro perspective, we see GBP/EUR quoting at 1.1278 having been as high as 1.1318 earlier in the day.

"It will be pretty impressive if the Euro moves a big figure higher on this ECB meeting. Has been a while since that's happened," says Viraj Patel, a currency strategist with Arkera. 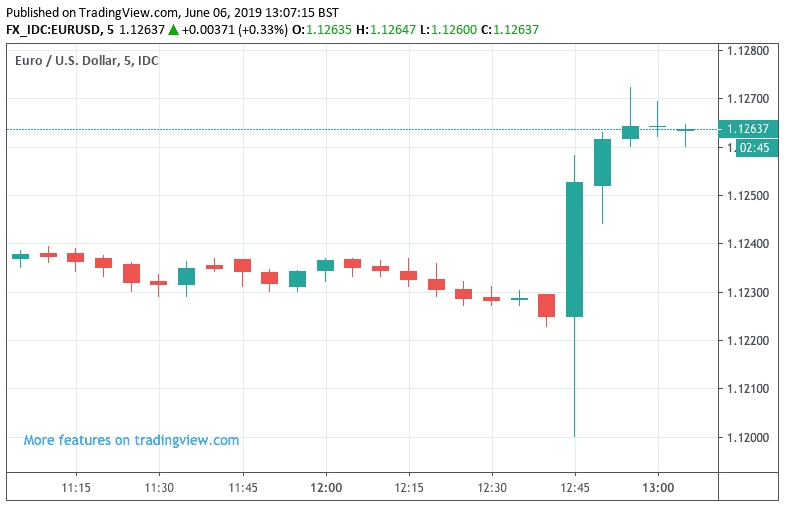 "As Draghi starts speaking EUR/USD is maintaining the 40 pip jump which followed the rates announcement, and now looking to pull higher. Holding a breakout above 1.1265 is positive and a close above 1.1300 is very bullish near/medium-term," says Richard Perry, an analyst with Hantec Markets.

Should the EUR/USD enter a "very bullish" move we would expect the Pound to come under pressure too, particularly as the currency is already caught in a determined downtrend against its European counterpart.

"The ECB is still trying to deliver dovishness without touching rates," says Carsten Brzeski, Chief Economist ING Germany. "Let’s be clear, another change to forward guidance is just another step to align the ECB’s forward guidance with market expectations; not the other way around."

Brzeski says the pricing of the new targeted longer-term refinancing operations (TLTROs) is broadly in line his expectations. "In our view, the fact that the ECB refrained from any comments on a tiering system for the deposit facility means that speculations about an actual rate cut are still overdone."

When a central bank is labeled as being dovish, the standard reaction would be for the currency to fall.

However, we see the Euro higher at the current time.

According to analyst Fawad Razaqzada at Forex.com, from the markets' perspective the "ECB not dovish enough".

"The market’s initial response to the just-released ECB policy statement was that the central bank was not dovish enough and so the Euro spiked higher and the DAX lower," says Razaqzada.

In the press conference, ECB President Mario Draghi did however say the Bank stands ready to introduce more agressive policies to support the Eurozone economy if needed.

Draghi stresses the ECB is ready to act in case of "adverse contingencies," adding there was discussion among the Governing Council that saw members raise the possibility of interest rate cuts, re-starting of quantitative easing and a further extension of forward guidance.

However, the overall tone was that the ECB is content to keep current policy settings stable as the economy continues to perform more or less in line with expectations.

"Mario Draghi is famed for his ability to talk down the Euro, yet he seems to perform best when the expectations are low. For while the ECB is always seen to take the glass half empty approach (risks geared towards the downside), they instead remarked that the current outlook is actually not bad, despite the Brexit and trade war uncertainty that looms large," says Mahony.

Aiding the Euro's rally was the raising of economic forecasts by the ECB's staff economists.

However, risks to growth outlook seen tilted to downside