- GBP/EUR in established downtrend and expected to extend

Pound Sterling is trading higher at the start of the new week as it adds to Friday's relief bounce that snapped a run of 13 successive days of losses which is now a new record.

Against the Euro, we see Sterling up 0.18% at 1.1363 from where it started the new week with markets seen digesting the results of European elections.

The summary thus far is that the expectations made ahead of the European polls have more or less come to pass: across Europe the more established, centrist parties have fared badly.

However, there have been no unexpected surprises that might scare investors out of Euros or Sterling. The Brexit Party did well in the UK, Italy's Liga and Marine Le Pen's National Rally in France also topped the ballot.

Sterling lost ground last week but then actually bounced after Theresa May announced her resignation, partly on reduced uncertainty regarding her future, and partly because the news had already been anticipated and priced-in to the exchange rate which was becoming oversold.

The consensus is that the outlook for the Pound-to-Euro exchange rate from here is neutral-to bearish as markets await the outcome of the conservative leadership election, which could pressure Sterling lower as the bookies’ favourite is Boris Johnson, a hard-Brexiteer. A new leader, however, will probably not be chosen until the end of June.

From a technical perspective, the market consensus on the outlook is about right. The charts show both the potential for a sideways consolidation or a bearish continuation lower.

Overall the dominant bear trend is still intact indicating a bias exists to more downside. A clear break below last week’s 1.1300 lows would confirm a continuation lower to a target at 1.1200. 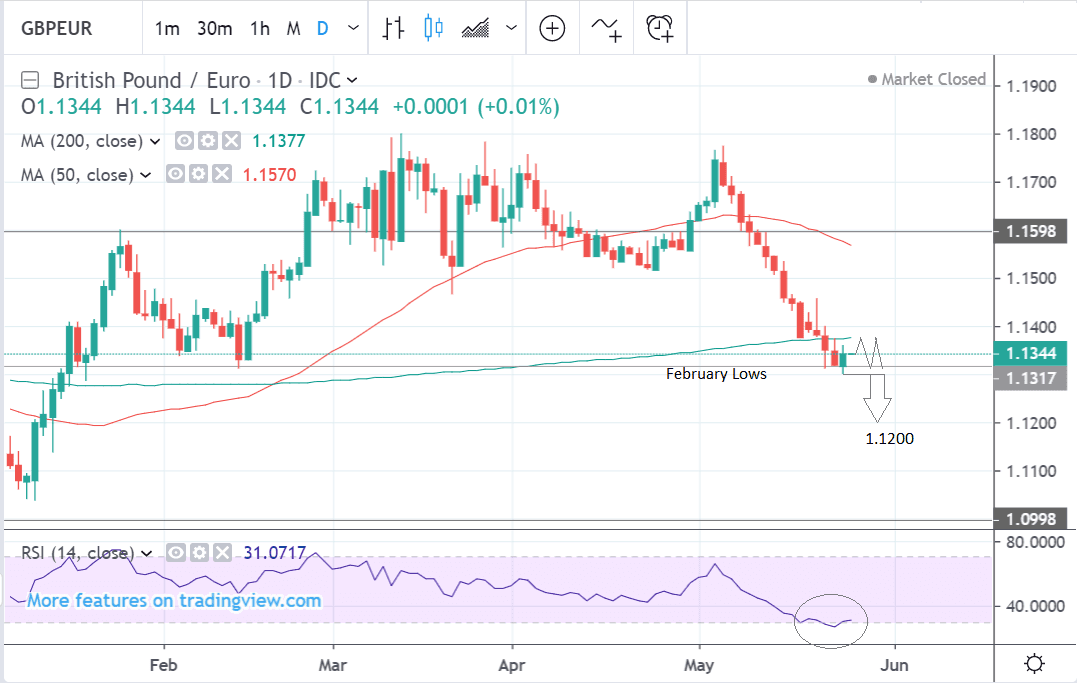 There are some bullish signs too, however, which contradict the bearish case. One of these is that the RSI momentum indicator in the lower panel has just given a 'buy' signal after moving out of oversold territory.

The 50-week MA on the weekly chart is underpinning the current lows and could be an obstacle to further weakness. The key February lows could also provide the basis for a rebound. 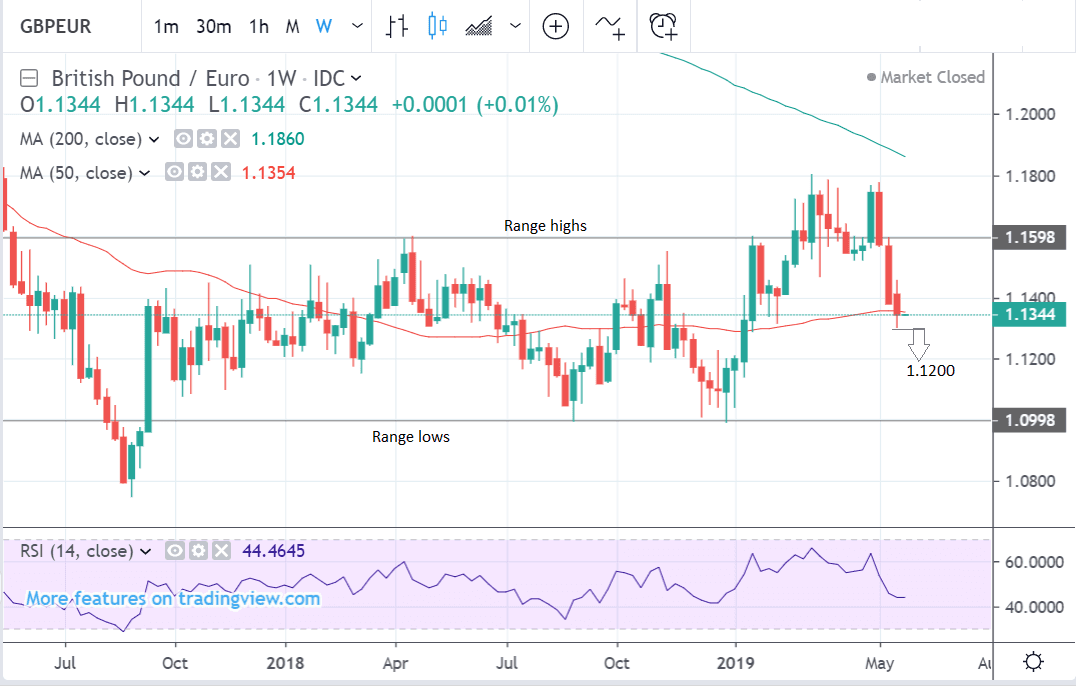 Despite these contrary signs, the strength of the prior downtrend, which saw a record 14 uninterrupted down days in a row, however, suggests a strong bullish trend may be underway, and the lack of resolution on Brexit suggests more downside is still quite probable.

So in summary: beware a short-term bounce extending over coming days, but we suspect the market will only sell into the strength ensuring the overall dominant downtrend ultimately reasserts itself at some point.

The main focus for the Pound over the coming week will be political, as the European Union (EU) election results are published and likely to show the conservatives having suffered a considerable defeat.

Out of 64 MEPs declared so far, Nigel Farage's Brexit Party has won 28, the Liberal Democrats 15, Labour 10, Greens seven, the Conservatives three and Plaid Cymru one.

"With a big, simple message - which is we've been badly let down by two parties who have broken their promises - we have topped the poll in a fairly dramatic style," says Farage on the BBC's Radio 4. "The two party system now serves nothing but itself. I think they are an obstruction to the modernising of politics, and we are going to take them on."

The extent of the defeat suffered by the Conservatives is sizeable and could be important as it may impact decision-making by party members as to who would be the most suitable replacement for May.

The worse the defeat the more likely the party will choose a potential leader with broad appeal such as Boris Johnson. Johnson is a Brexiteer who has said that if he were PM, we would be leaving the EU on October 31 “with or without a deal”.

The exact line-up of potential candidates will probably be announced within the next week and the selection and their potential impact on Brexit is likely to affect the Pound. Current contenders include Boris Johnson, Andrea Leadsom, Dominic Raab, and Michael Gove, all of which are considered Brexiteers. Jeremy Hunt is the leading remain voting contender, but even he describes himself as a 'born again' Brexiter.

A summer of political intrigue lies ahead, and the uncertainty should keep Sterling under pressure.

On the hard data front, the week ahead is expected to be relatively uneventful.

Consumer Confidence is probably the most important release, and is forecast to show a moderation to -12 in May from -13 previously, when it is released at 00.01 BST on Friday, May 25.

The inflation report hearings on Tuesday morning could also impact the Pound as Mark Carney, the governor of the Bank of England (BOE) and several Monetary Policy Committee members testify on the inflation and economic outlooks before Parliament's Treasury Committee, however, much of what they say will be highly conditional on the outcome of Brexit.

Housing data is highlighted, with mortgage approvals out on Tuesday at 9.30 and the Nationwide house price index is out on Friday at 7.00.

The main event for the Euro is the result of the European Union elections. The single currency is currently finding support after the anticipated shift in favour of eurosceptic parties was not as great as expected, thus downside pressure has been limited.

"The pro-EU parties maintained their majority, albeit with less cohesion. The centre-left and centre-right majority that has dominated Parliament since 1979 is being replaced by a more divided but still pro-EU bloc of four parties," says Marshall Gittler, a strategist with ACLS Global.

“The Euro has opened the new trading week marginally higher against the Greenback following initial results from the Parliamentary elections in Europe, suggesting that the mainstream have managed to hold ground against the feared outcome of another populist wave in the European Union,” says Jameel Ahmad, Global Head of Currency Strategy and Market Research at FXTM.

Results indicate some support for populist and Eurosceptic parties but there was no eye-opening blow-out in favour of fringe anti-EU parties.

"This suggests that momentum for the anti-establishment is relatively constrained, at least for now, meaning the Eurodollar should find some initial support from hopes of policy continuity in Europe,” says Ahmad.

On the hard data front, the main release is May economic sentiment data out at 10.00 BST on Tuesday, May 28, but it is unlikely to read much differently from the recent disappointing PMI survey results which showed declines where the market had expected gains. Expectations are currently for a gentle slide in Industrial, Services and Business sector sentiment.

Some key German data is also scheduled for the coming week. German CPI is out on Friday at 13.00 BST and could provide a heads up of what to expect for the whole Eurozone. Current estimates are for it to show a slight slowdown to 0.3% month-on-month after a 1.0% gain in April.

The higher the result the better from the perspective of the Euro as it is more likely to raise interest rates which have a direct impact on the currency. Higher interest rates are appreciative because the attract greater net inflows of foreign capital.