Pound Sterling is looking to recover losses sustained over the course of the past 24 hours and is seen trading at 1.1437 at the time of writing, virtucally unchanged on the day's open. However, traders had taken the exchange rate some 0.30% higher in earlier trade on the view there has been little material change in the overall Brexit story, despite last night's succession of votes in the British parliament.

Sterling fell against the Euro and other currencies overnight as Parliament failed to secure itself the ability to instruct the government to delay Brexit beyond the March 29 deadline, however with the Pound-to-Euro exchange rate trading in relatively stable fashion markets appear to be showing little conviction that the odds of a 'no deal' Brexit have actually increased over recent hours. 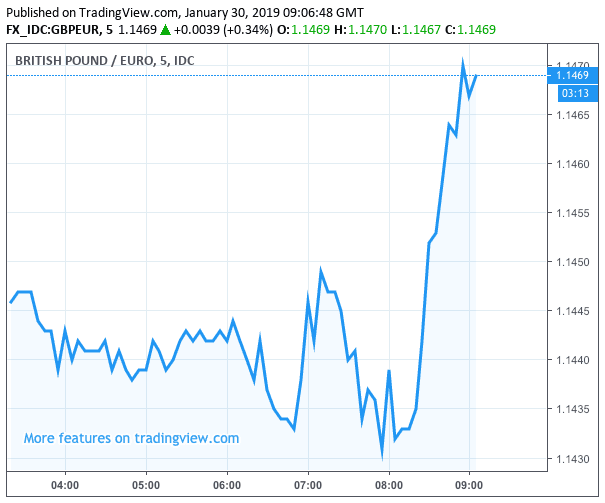 Above: GBP/EUR was bid higher when London markets opened, it has since settled lower.

The case for establishing fresh bets on further Sterling strength has nevertheless waned as Parliament's inability to delay a 'no deal' Brexi raises uncertainty levels somewhat.

Strategists at Deutsche Bank have today said they are turning neutral on Pound Sterling as a result and are exiting a trade established two weeks ago that sought to benefit from the rally in the Pound against the Euro.

Deutsche Bank say it is now more likely the clock runs down to the March 29 deadline, with lawmakers likely being forced into approving Prime Minister Theresa May's deal when faced with the threat of a 'no deal' Brexit.

"As well as increasing the risk of a crash Brexit by accident, it should not be positive for economic confidence which is already deteriorating due to political uncertainty," says Oliver Harvey, strategist with Deutsche Bank in London. "We consequently take profit from our short EUR/GBP recommendation from two weeks ago and turn neutral on Sterling."

A 'short' EUR/GBP is trader-speak for selling the Euro and buying the Pound with the view to making a profit if the market goes in the direction you expect.

The Pound has rallied through 2019 as markets have raised bets a 'no deal' Brexit was becoming increasingly unlikely, with an amendment put forward by Labour Party MP Yvette Cooper being the proof cited by traders to justify the currency's advance.

However, last night saw Parliament shoot down Cooper's attempt to delay the Brexit date beyond March 2019, and has therefore drawn questions on the sustainability of Sterling's rally. It would appear markets have since taken heart from signs Labour leader Jeremy Corbyn will sit down with Prime Minister May and see what compromises can be ironed out by the two parties in order to secure ratification of the Brexit deal when it next comes before parliament.

While Deutsche Bank's Harvey has turned neutral on the Pound, strategist Hans Redeker with Morgan Stanley says he remains of the opinion the Pound is a 'buy on dips'.

Redeker notes that while uncertainty will remain a feature of Sterling markets, and he will be watching for any signs of movement from the EU side.

The basis of the 'buy on dips' strategy does appear to be largely technical in nature.

"We see a limited retracement as market positioning is around neutral so not as prone to large swings on headlines," says Redeker.

The strategist notes GBP/USD has remained within an upward sloping channel since the start of the year, suggesting strong support around 1.30.

The British Pound pushed higher in mid-week trade in London as traders sought to recover levels lost in a bruising slump following the unexpected outcomes to a series of votes held in the UK parliament overnight.

Sterling markets cheered the potential for a cross-party compromise on securing a Brexit deal after Jeremy Corbyn, the Labour leader confirmed he is ready to meet the Prime Minister to discuss a "sensible Brexit solution that works for the whole country".  May has extended an invitation to Corbyn to meet in Number 10 Downing Street following today's Prime Minister's Questions session in parliament, suggesting compromise might be found in the run up to Brexit day on March 29.

Furthermore, markets have guaged that nothing has materially changed over recent hours: in two weeks time May will return to parliament to present an amendable motion, and we can once again expect another motion to be presented that will look to delay Brexit thereby ensuring another opportunity to delay Brexit lies ahead.

Further aiding sentiment is the view that the Prime Minister emerges from last night's series of votes looking stronger, which tends to be a textbook positive for any currency in times of political instability, the kind the UK is currently witnessing.

The winner of the night's drama in parliament was Prime Minister Theresa May who saw off an attempt by parliamentarians to effectively take a 'no deal' Brexit out of play; an outcome that would have materially weakened her negotiating position. Instead, an amendment backed by the government that would strengthen her hand in future talks with the EU unexpectedly passed through the House of Commons.

An amendment put forward by Labour Party MP Yvette Cooper aimed at delaying the Brexit date and effectively making a 'no deal' Brexit less likely failed to pass through the House, while an amendment put forward by Conservative backbencher Sir Graham Brady saying the UK should seek alternative arrangements on the Irish backstop passed. It looks to us, judging by reactions by EU leaders in the wake of the votes that the EU was expecting the UK to ask for a Brexit extension with a view to softening their red lines.

However, the passing of the Brady amendment caught the EU and foreign exchange markets off guard as there was an assumption the government would be happy with a narrow defeat.

Reactions from currency analysts to the latest developments suggest attitudes towards the Pound will be more cautious going forward and the optimism seen over the past four weeks will be in short supply.