UK Manufacturing witnessed a marginal fall in the total number of orders registered on its books in the month of May according to data from the Consortium of British Industry (CBI), released on Tuesday morning.

The CBI 'Industrial Trends Orders' survey revealed a balance of -3, its lowest since November 2016. This was lower than the 2 forecast or the 4 previously. The balance is the difference between the percentage of manufacturers reporting an increase in total orders (22%) and those reporting a decrease (25%).

One of the bright spots of the survey was the increase in export orders, which showed a balance of +8 - well above the long-run average of -19.

The balance for 'Output' fell to the lowest level since 2016, however, manufacturers were optimistic about the future.

"Manufacturers expect output to grow at a more robust pace in the coming quarter, with 39% predicting growth, and 12% a decline, giving a balance of +27%," says the report. 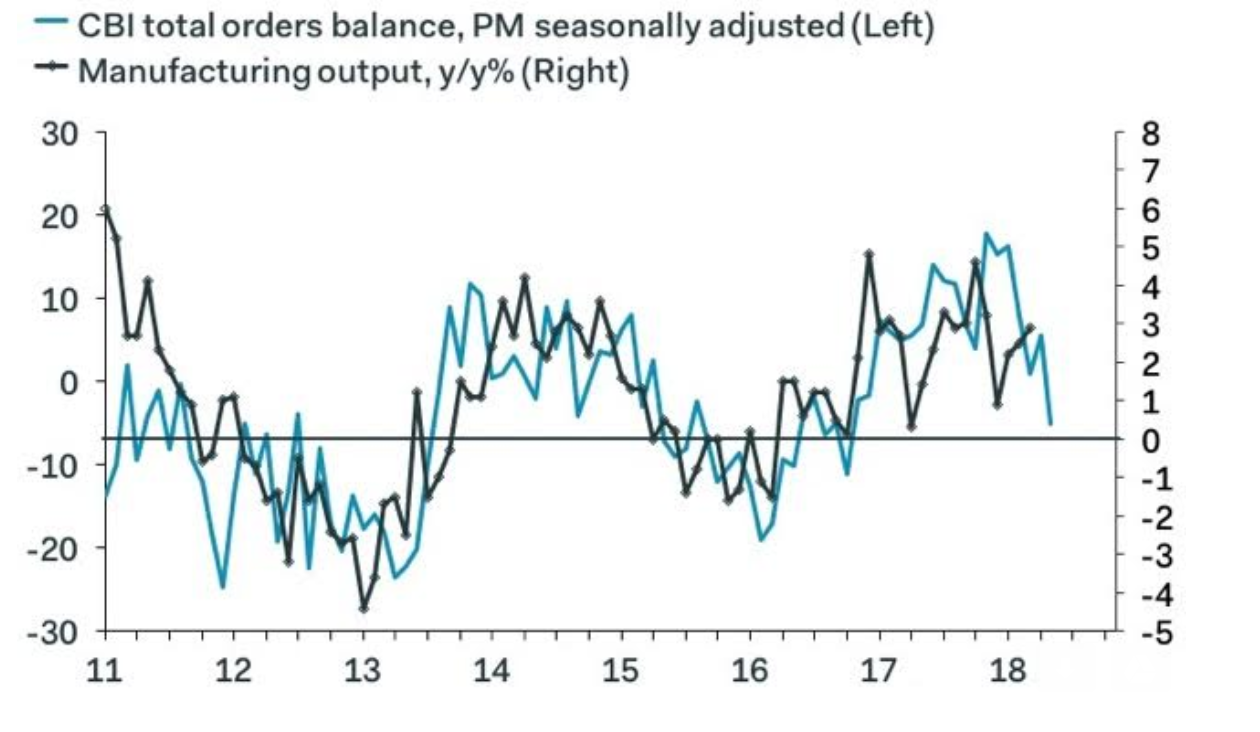 Overall the report suggested UK manufacturing was slowing, but not disastrously.

"UK manufacturing has lost some steam since the start of the year, on the back of a softening in both domestic and global growth," says Anna Leach, head of economic intelligence at the CBI.

“While global economic growth – particularly in the EU – has disappointed in the first quarter of the year, demand from overseas continues to shore up manufacturing activity in the UK, with export order books remaining well above historical average," added Leach.

The Pound was broadly unchanged against the Euro after the release, with GBP/EUR trading at 1.1391 from a pre-release 1.1396, however, versus the Dollar, the Pound was down, with GBP/USD trading substantially lower at 1.3456 from 1.3473 previously.

Sterling may have weakened as the slightly poorer CBI data supplied further evidence of a slowdown in the UK economy, which registered well-below average growth of 0.1% in the first quarter.

Of the CBI release, Samuel Tombs, chief UK economist at Pantheon Macroeconomics says manufacturing is "still slowing, reducing the potential for a GDP rebound in Q2."

"The recovery in the manufacturing sector appears to have lost more momentum in May, as the boost to growth from sterling’s 2016 depreciation has worn off and domestic consumers are spending more cautiously," says Tombs.

The lower CBI result makes it less likely Q2 GDP will show the rise to 0.4% which is required for the Bank of England (BOE) to feel confident about putting up interest rates, and since higher interest rates are a major positive driver for the Pound, the aforementioned fall in GBP/USD is not surprising.

"It remains touch and go whether GDP growth will pick-up to the 0.4% quarter-on-quarter rate in Q2 that the MPC needs to see to conclude that the economy is growing at an above-trend rate and therefore needs higher interest rates," concludes Tombs.